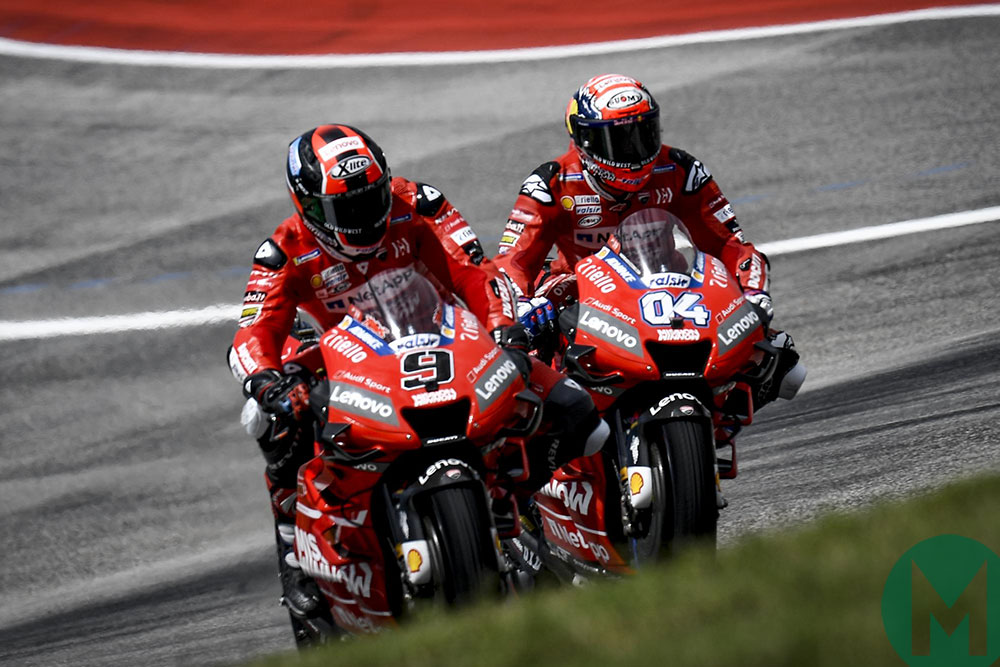 COTA’s back straight is MotoGP’s longest and therefore its greatest test of straight-line machine performance. Riders exit the dead-slow, first-gear Turn 11 hairpin and accelerate mostly uphill, all the way to almost 220mph/335kph. This doesn’t only test horsepower and torque, it also tests electronics and aerodynamics.

Winner of the speed race over the weekend was Ducati, which bettered Honda for the first time this year. Both Andrea Dovizioso and Jack Miller reached 216mph/347kph, against Marc Márquez’s 214.5mph/345kph. KTM has finally got some serious power out of its reverse-rotating crankshaft engine, because Johann Zarco’s RC16 was next up at 214.2mph/344.8kph. Aprilia also appear to be making improvements because Aleix Espargaró recorded 214.1mph/344.7kph, just ahead of Joan Mir’s Suzuki at 213.9mph/344.2kph.

Bottom of the pile was Yamaha, with Fabio Quartararo on the fastest M1 at 211.6mph/340.6kph. That’s a huge handicap against the Ducati and proof that Yamaha still has a long way to go on engine, electronics and aerodynamics performance.

It’s not often that the events of several hundred million years ago bother MotoGP riders and engineers. But they do at COTA – specifically a continental collision that happened 300 million years ago, creating a fault zone that may explain the instability of the local terrain and thus the vicious bumps that caused so many super-scary moments during the weekend.

“I almost killed myself this morning down the back straight,” said Miller after the race. “I didn’t really understand how Marc got that headshake yesterday, but boy I got it this morning on the first lap of warm-up. I thought it was game over. The bike started tank-slapping on me and I literally had no idea what was going on – my feet came off the ’pegs and when I got to the end of the straight the brakes were gone. I had to pull the lever six times.

“On the first lap of the race I had a good opportunity to pass Cal [Crutchlow], but I didn’t because the front wheel was bouncing up and down and when these bikes go past each other at close quarters the wind is a problem and that’s the last thing you want at close to 350kph (217mph).” 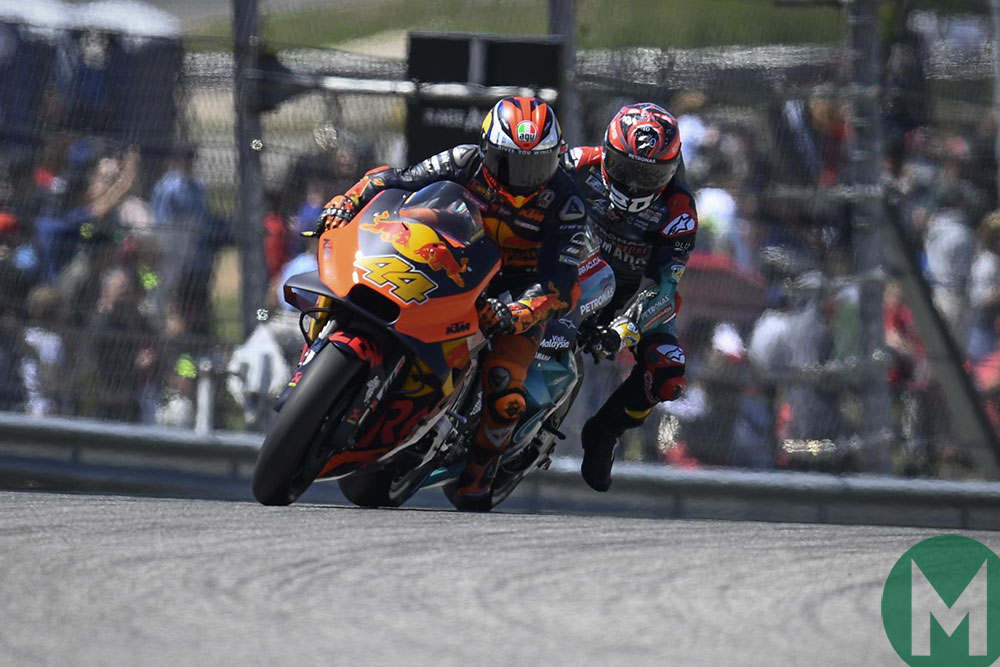 Espargaró had his biggest scare on Friday. “I completely broke both lock-stops – the bike was shaking like crazy at more than 300kph (190mph). It’s super difficult to keep the throttle open.

“This track is fantastic, but they need to resurface it. We can’t race here again with the track in this condition, absolutely no way. It’s also super bumpy in many corners, but more or less you can handle it in the corners. Turn Two is a disaster but if you lose the front there you are doing 130kph (80mph), but in sixth gear on the long straight it’s super dangerous, because if someone makes a mistake and crashes there…

The downhill Turn Two right-hander is the bumpiest of the track’s 20 corners and demands a special technique.

“Going into Turn Two you roll off early, then get back on the gas and accelerate over the bumps to get the chain force back,” explained Miller. “Otherwise the bike gets all flopped out. But in doing that you’re going through the most crucial part of the corner with the gas on, which takes the load off the front. Towards the end of the race I nearly lost the front three or four times there – I was on my elbow big time.”

Riders tried various set-up tweaks to cope with the bumps – lengthening the wheelbase and softening the suspension – but racing is all about compromise, so these kind of changes make the bike slower to steer and more tricky to slide.

“You can make the bike more compliant but then you lose chassis stability in other areas of the track,” said Öhlins racing manager Mats Larsson. “You can run softer spring rates, a bit more preload and softer damping, but then the bike becomes too much of a streetbike, so it’s difficult to slide and it eats the tyres. Really, it’s up to the riders – they can’t sit like couch potatoes, they have to stand on the ’pegs.”

COTA’s problem, of course, is that the track can be resurfaced, but the instability of the local terrain will most likely create more bumps in the next few years.

COTA’s bumps amplified another issue that MotoGP riders face wherever they race.

Arguably the most important part of a racing motorcycle is the front tyre – and all front slicks have their own grip and construction characteristics.

When a rider brakes hard for a corner the front tyre carries perhaps 200 kilos of load, so it compresses significantly. This deflection flattens the tyre’s profile and therefore increases the rubber/asphalt contact patch, which is a good thing. The tricky part comes when the rider starts releasing the brake, which reduces load on the tyre, which then regains its normal profile, reducing the contact patch. Which can be a bad thing.

Dealing with this so-called tyre pop-up is currently one of the most vital riding skills in MotoGP, because the more smoothly you can help the tyre return to its normal shape the faster and safer you can attack corners. It’s no great surprise that the best three riders at dealing with this issue are Márquez, Dovizioso and Valentino Rossi.

“If you’re very hard on the front tyre all the way to the middle of the corner then you must be very, very, very slow when you release the brake, turn the bike and open the throttle, because the change between loading the tyre and unloading the tyre is very bad with the Michelins,” explained Dovizioso.

And COTA’s bumps only make things worse. “When you change the pressure on the tyre you can crash easily, so with the bumps the problem is more than double,” added the Italian. “The bumps are like speed bumps, like a whoop section in motocross, so you have to be very, very smooth with every movement, every effort and every intensity you put into the tyres. Remember that with the Bridgestones we used to cut the inside kerb a lot. With the Michelins we almost never do that.” 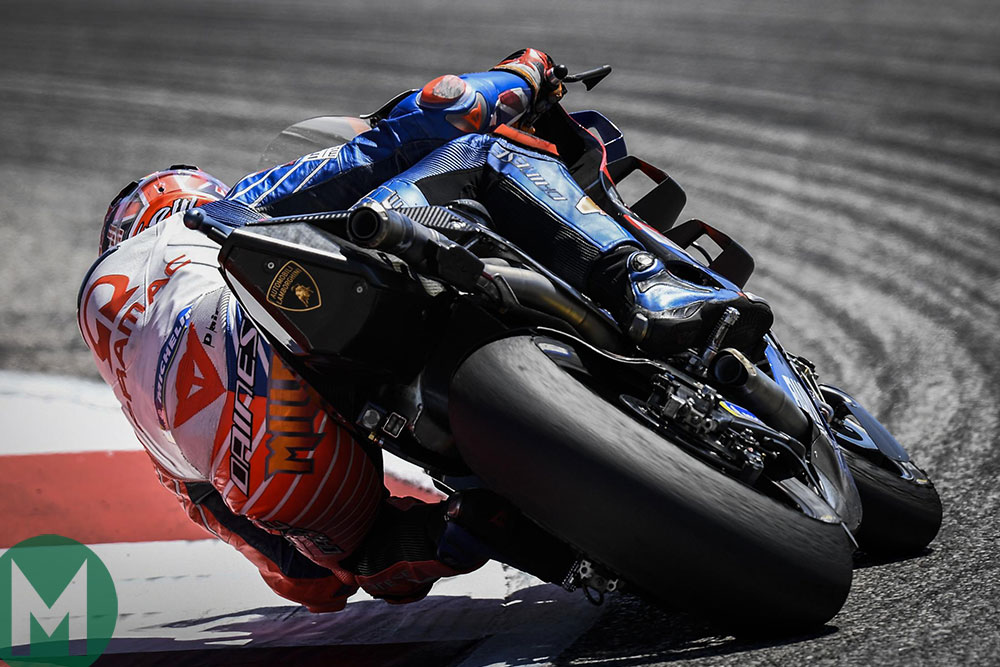 Ducati is still working hard at improving the ergonomics of its Desmosedici, with both Miller and Danilo Petrucci experimenting with sculpted sections attached to the fuel tank. The aim of these add-ons is to give the rider better leverage to turn the bike, especially through changes of direction

“We are trying many solutions to make the bike easier to ride,” said Petrucci. “Our proposal is to move the bike with my legs. It’s quite difficult to do, but we are trying everything. In the race in Argentina the average difference between me and Dovi was 0.1sec per lap, so the details make the difference.”

“My groin is hanging off now!,” joked the Aussie after the race. “Trying to change direction through that first sector really gets you.”