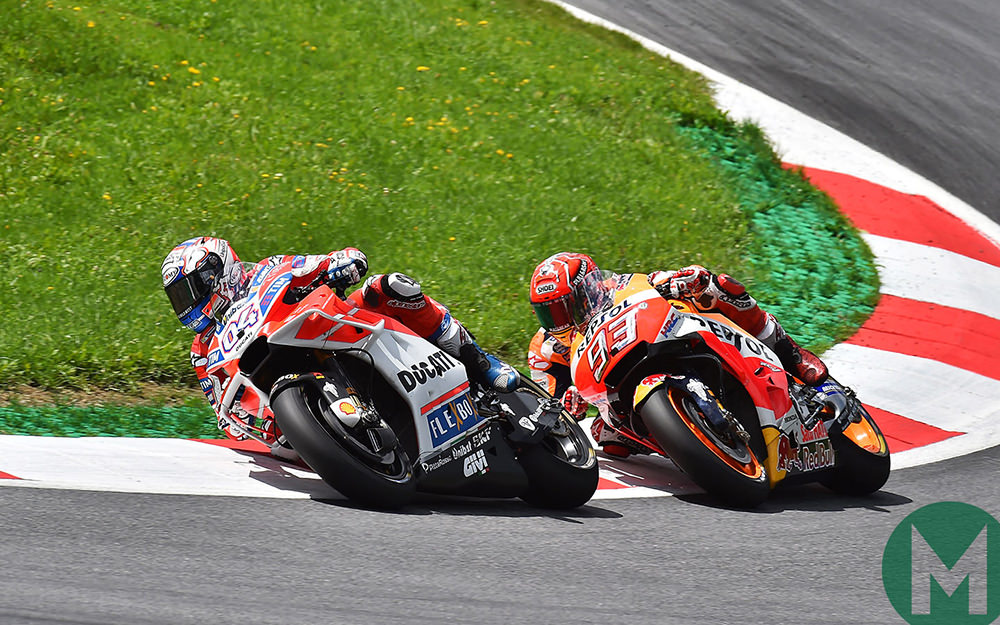 Incredible but true: Honda and Ducati have never battled each other for a Grand Prix world championship. For one reason or another, each factory’s best years have never coincided with the other’s. Until now…

When Casey Stoner won Ducati’s first Grand Prix crown in 2007, Dani Pedrosa finished second, but the Honda man was never in the hunt, ending the season a whopping 125 points down. The only other time Ducati came close to winning a GP world title was in 1958, when Alberto Gandossi rode Fabio Taglioni’s first desmodromic engine to second in the 125cc championship, just seven points behind MV Agusta’s Carlo Ubbiali. Honda entered the Grand Prix arena a few months later.

Now, here we are, seven races to go in the 2017 MotoGP Championship and the season is developing into a Honda versus Ducati duel, rather than the usual Honda versus Yamaha fight, the recurring theme of the last 35 years.

Why is this so?

Several reasons, of course. But as usual in racing it’s mostly down to the tyres, especially in an era of control tyres. Remember the first years of the Bridgestone control tyre era? Honda took almost four seasons and many more frame modifications to make the RCV work with the tyres. Ducati never got the best out of them, at least not after it had lost its Aussie magician. The only factory that got along with those tyres from the outset was Yamaha.

Now it’s Ducati and Honda making the best job of getting the most out of the Michelins. Ducati has won three of the last six races, Honda two, Yamaha only one.

Ducati is currently the cleverest at squaring the circle of tyre choice, it has found the key to the Michelin conundrum. On Saturday in Austria Andrea Dovizioso qualified on the front row using the medium-compound rear and used the soft rear for the 28-lap race. Weird, eh?

“I think it’s better we don’t speak of soft, medium or hard, because in one tyre there are three or four different rubbers,” explained Dovizioso after the race. “There is always a mix in every tyre, so you need to understand which rubber, sometimes the casing, but usually the rubber, will be better for hot temperatures or cold temperatures.

“Every time it’s different and it makes a big differerence, that’s why the soft tyre didn’t work yesterday and did today, for example. Most people raced with the hard rear, but I raced with the soft. The step between each tyre is very small, so it’s difficult for everyone to manage the choice. Every day is different and every temperature can create different grip. This is why the championship is so close and why every weekend is different.”

Márquez proved Doviozos’s point by choosing the hard rear for the race, at the end of which the pair were separated by just 0.176 seconds, which must have had Formula 1 aficionados weeping with jealousy. The Yamahas meanwhile were nowhere, Valentino Rossi and team-mate Maverick Viñales about eight seconds back at the finish.

Márquez may have been beaten, despite his sideways-on-the kerb heroics at the final corner, but Repsol Honda’s probably happier than anyone in pitlane. Last year at the Red Bull Ring it was destroyed by Ducati, Márquez finishing in fifth place 11 seconds behind the winner.

For this year’s Red Bull Ring race Honda was ready; indeed during the previous Monday’s post-Brno test it may have completed the transformation of the RC213V from a Bridgestone motorcycle to a Michelin motorcycle. Honda’s first 1000cc MotoGP of 2012 was designed for Bridgestones, which meant taking full advantage of the front tyre’s remarkable corner-entry grip by engineering a bike that could be thrown into corners on its nose, still on the brakes. That’s where Márquez used to make his time, with those jaw-dropping corner entries; the front tyre sliding, then gripping to fire the bike around the apex.

The Michelins don’t work like that. The place to make time with the French tyres is later in the corner, which has demanded a redesign of the RC213V’s balance. HRC has adjusted the RCV to find more time in the acceleration phase, via bike balance, via electronics adjustments and by Márquez adjusting body position and riding technique. 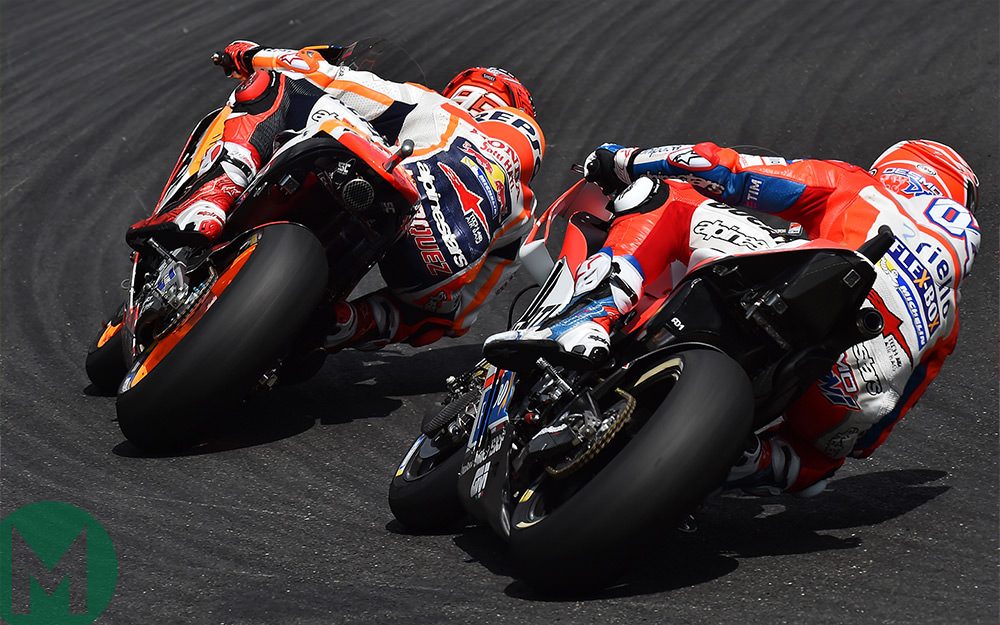 That was obvious on Sunday: Márquez often lost time into corners, the rear end pivoting around. This didn’t matter in the Bridgestone era because the bike was controllable in that situation. Now the bike bias is different, so when Márquez gets sideways on the brakes, the bike misses the apex and he runs wide.

“In this race I suffered much more than last year at the brake points, so it was difficult to be consistent,” said Márquez on Sunday afternoon. “You could see on TV, I was sliding a lot with the rear. But I could manage the situation well for gaining acceleration. I think we’ve found a good base – now we have a test at Misano to confirm if this setting works again at a different track.”

Ducati has also taken time to understand the Michelins so it can maximise their positive points and minimise their negative points. Dovizioso is the only rider I’ve heard say that the Michelins improve his bike, which explains why the Italian factory is so strong now. It’s more a rubber thing than a motorcycle thing, because the Desmosedici has hardly changed.

Dovizioso says the Michelin rear grips better than the Bridgestone at full lean, so the bike turns better, which crucially reduces the Ducati’s old turning problem. Dovizioso also believes that Honda and Yamaha are having more trouble adapting to the French tyres.

He is certainly correct in respect of Movistar Yamaha. The factory team that’s been a challenger since the 1970s is currently in big trouble. Both Rossi and Viñales led the championship earlier in the year, but between them they’ve scored just one podium result from the last three races.

Yamaha’s YZR-M1 has always been a corner-speed bike, so that’s how it wins races, not with impressive braking or acceleration performance. Achieving high corner speed is easy when the rider has good edge grip, but when that edge grip goes he is in trouble.

That’s exactly what we saw on Sunday. While Rossi and Viñales had the grip to use corner speed they were in the fight. At half distance Viñales was just two seconds off the lead, by the end he was seven seconds behind. Likewise Rossi, who lost 3.1 seconds to the leaders in the first 14 laps and 5.6 seconds in the last 14 laps.

Their problem is the same problem that haunted them throughout the first year of the Michelins – the bike consumes the rear tyre too quickly. The 2017 M1 was designed to fix that problem, but it spoiled turning. That’s why Yamaha rushed out the 2017.2 frame, which improved turning but is still too greedy with the rear tyre. If this sounds like a case of poor engineering, it isn’t. All these opposing factors are on a knife edge – at this level of racing it’s impossible to gain in one area without losing in another.

Rossi knows Honda and Ducati have engineered better Michelin bikes and perhaps even more importantly they’ve found a better way through the Michelin maze, so Yamaha needs to work on mechanical grip, traction control and tyre choice. “Rear-tyre degradation is our problem,” said Rossi on Sunday. “The others have found a better solution.”

Viñales, who many thought was going to be the man of 2017, is in an even darker place. He is young and inexperienced, especially with the Yamaha, so he is very confused between the 2017 and 2017.2 frames, not to mention the serpentine process of tyre choice.

Viñales has been exasperated at recent races – he knows he has the talent to be in the thick of the title fight, but he hasn’t got what he needs to go with Márquez and Dovizioso.

“In hot temperatures we have a real problem,” he said. “It’s not a tyre problem, because the Tech 3 bikes don’t have the problem.”

“Sorry,” he said, grinning. “It’s better not to talk about the chassis… sorry! Now we have a test at Misano. If we don’t change something there, then the championship is impossible.”

At the Red Bull Ring many people congratulated Dovizioso for his new-found aggression and his apparent willingness to take the kind of risks he never used to take. Nonsense! The 31-year-old Italian is a thinker, not a risk-taker. His speed comes from years of hard work and a mind that never stops thinking about how to get the best from his bike and tyres. Finally, he has got everything in place, so he is prepared to go head to head with Márquez.

Perhaps this season will continue to be MotoGP’s first Ducati versus Honda showdown. Then again, Yamaha may discover the Michelin magic to win the tyre battle at Silverstone and get itself back in the hunt.