Phillip Island is the ultimate test of bravery, especially when track conditions were as sketchy as they were during last weekend’s MotoGP Australian Grand Prix 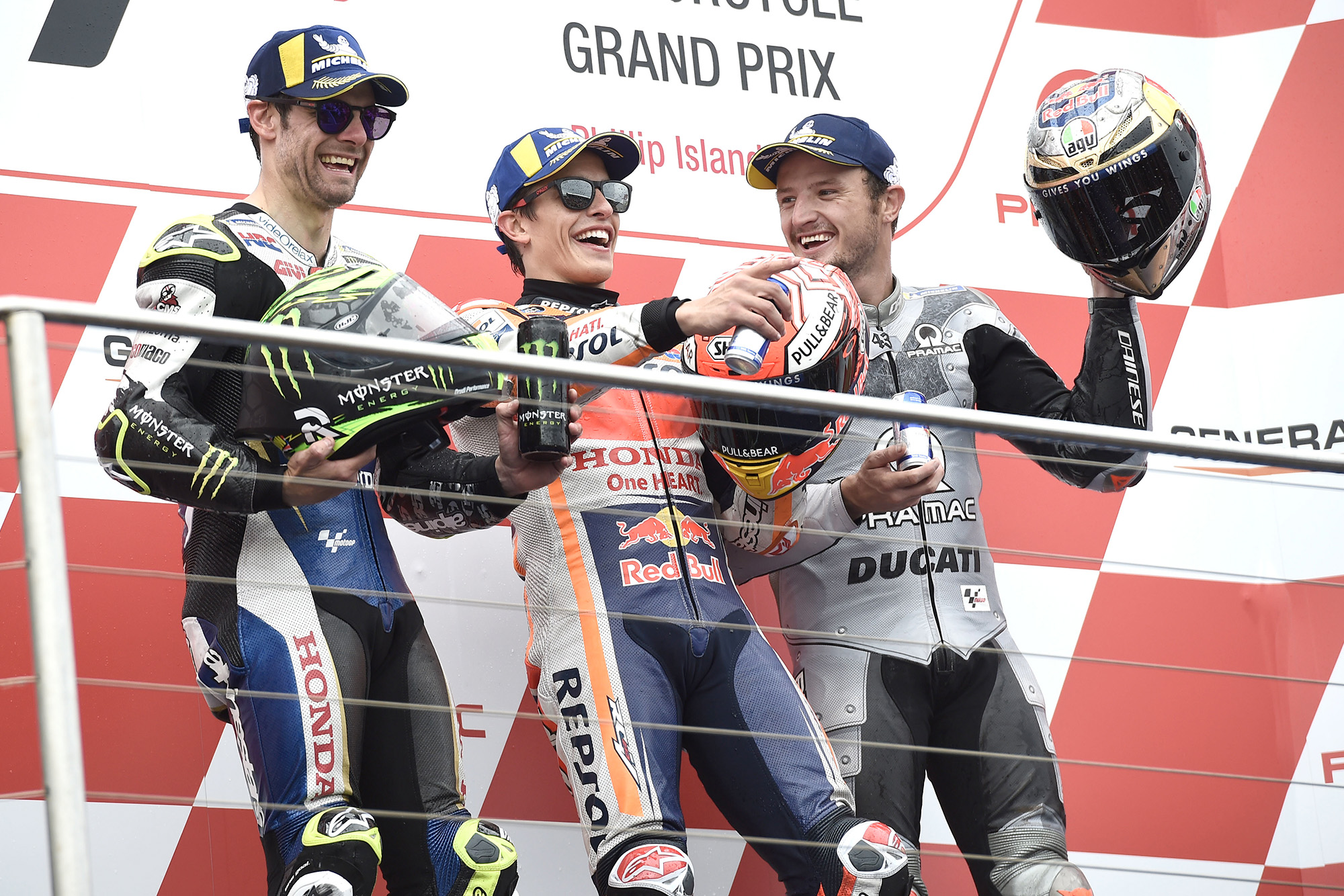 All smiles for the top three at Phillip Island Photo: Motorsport Images

MotoGP podiums don’t get much happier than Phillip Island on Sunday: best mates Cal Crutchlow and Jack Miller were in the prosecco party for the first time together and winner Marc Márquez was loudly cheered, a first for him at Phillip Island since 2016, when a bunch of one-eyed fans cheered when he crashed out of the race.

I think this season may have been the turning point for the Márquez haters, most of whom have finally clocked the towering mountain of his talent and allowed their four-year-old conspiracy theories to wither and die.

There were two other reasons for all that podium ecstasy: mainlining adrenaline from 40 minutes ripping around MotoGP’s fastest racetrack (Red Bull Ring doesn’t count because it’s all straights) and pure and simple survival.

Phillip Island is a glorious racetrack. It is also probably MotoGP’s most dangerous, especially when conditions are cold and windy like they were all weekend. The thrilling, challenging circuit is very unforgiving in iffy weather and it’s so fast that there’s rarely such a thing as a minor tumble there.

Last year Crutchlow nearly ended his career at Turn One. This year, Miguel Oliveira and Fabio Quartararo were stretchered away after huge crashes in practice and the race was only a few seconds old when Danilo Petrucci got launched from his GP19, knocking Quartararo to the ground once again. Finally, Maverick Viñales went flying when his last-lap do-or-die on Márquez went awry.

The combination of cold track temperatures and a hugely fast circuit dominated by long, sweeping corners creates a nightmare for riders.

First, the lack of straightforward in/out corners has riders putting little fore/aft pitch into their bikes, so they don’t load the tyres enough to really generate heat in the rubber. Second, the cold weather and strong winds conspire to reduce tyre temperature. Third, the track is so fast that riders, their bikes and tyres merely float across the asphalt through much of each lap.

This is why little Dani Pedrosa never went well on a MotoGP bike at Phillip Island. The 51-kilo Spaniard won MotoGP races at 16 other racetracks but never even came close at PI, because he struggled just to keep his bike on the ground.

“I’ve never had a crash that I’ve thought about – but this one has haunted me for a year, honestly. You’re thinking about it, you never know if it’s going to happen again.”

All of this puts everyone in bike racing’s classic Catch 22 situation. If they don’t ride as hard as they can they won’t work enough heat into the tyres to make the tyres grip. But if they do push hard, perhaps they’ll crash before the tyres reach optimum temperature. And if they push extra hard, perhaps they’ll use up their tyres before the end of the race. All of motorcycle racing is a tricky balancing act, but Phillip Island is the highest high-wire walk of the MotoGP championship.

The Petrucci/Quartararo incident at turn two perfectly illustrated this situation. Both riders had chosen hard rear slicks, which obviously take longer to warm up than softer tyres, so when they tipped into the first left-hander Quartararo nearly fell, ran wide, and was collected when Petrucci’s rear came around and flicked him skywards.

The same nearly happened to Miller, who also went with the hard. “As I went into Turn Two the rear came around on me,” he said. “I was able to grab the gas a bit and power out of it, whereas I think Danilo was a bit deeper into the corner.”

On the other hand, Márquez and Viñales decided on the grid to go with soft rears. This gave them enough grip to push from the start, but would their tyres make it to the finish at a track that especially burns the left edge of rear tyres?

Márquez is the master of strategy, so in the end he had it worked out best, even though he admitted that last year’s winner Viñales was faster, at a track where Yamaha’s YZR-M1 excels. In Thailand three weeks ago, Marquez followed Quartararo throughout then pounced at the end. In Japan last week, he had the pace to push hard and build a gap on Quartararo, which he did. This time he was back to Buriram mode.

“I use this strategy when I’m not the fastest one on the track,” explained the six-times MotoGP king. “Maverick was nearly one second faster than me in qualifying, but I knew if I took some risks for a few laps to understand the way to follow him it would be enough. That’s what I did with Quartararo in Thailand.”

Also, Márquez was able to look after his tyres better by shadowing Viñales lap after lap. When a rider follows a rival, he can work out at which corners he can reduce the gap without stressing his tyres, which allows him to minimise the stress through corners that do damage the tyres.

And he always knew he had a top-speed advantage – his Repsol Honda RC213V reaching 210mph/338.1km/h on the start/finish, against the Monster M1’s 207.2mph/333.4kmh. This is why HRC was so obsessed with increasing horsepower for 2019, because more power gives its riders more chances to make passes without taking crazy risks. Thus, Márquez sped past Viñales as they commenced the final lap.

Finally, Viñales had fought so hard to stay out front that he had overused his rear tyre – once again undone by his great rival. When he changed from left to right between Lukey Heights and the MG Hairpin his rear tyre kicked and his bike spat him over the top. Remarkably this ended his hopes of scoring six consecutive top-four finishes for the first time in his MotoGP career. Meanwhile, this was Márquez’s fifth win in a row.

Crutchlow’s ride, witnessed by the surgeon who screwed and plated the ankle he mangled at Turn One last October, was heroic.

The 2016 Phillip Island winner was overjoyed to have laid the ghost of 2018 to rest on the podium and Miller couldn’t have been more delighted to share his first home GP podium with his best friend in the paddock, especially after what had happened on their previous visit. “This time last year I was with Crutch in hospital here and he was off with the fairies with the drugs,” laughed the youngster.

“After that sip of champagne [sic] I’m still off with the fairies now – I don’t drink!” replied Crutchlow, who still has struggles with the bad ankle.

“I’ve never had a crash that I’ve thought about – just get back on and don’t really care. But this one has haunted me for a year, honestly. I said to Lucy before I came here – I was scared and worried. And if you’re thinking about it, you never know if it’s going to happen again.”

And it did happen again, just not to him. Oliveira’s FP4 crash was similar to Crutchlow’s 2018 FP2 accident. Both men were heading into Turn One at monumental speed when they were effectively blown off their bikes as they passed the grandstand area to be hit by strong south-westerly winds blowing all the way from Antarctica.

A great race weekend for Crutchlow was just another race weekend for Márquez. On Friday the 26-year-old Spaniard apparently crashed his RC213V at MG. The front tyre was fully tucked and the bike was at 70.2 degrees of lean, but he saved the day with his usual wizardry. Then he strode to his 11th victory of the year and the 55th of his MotoGP career, which makes him Honda’s most successful rider of all time, taking him past 1990s Aussie legend Mick Doohan. 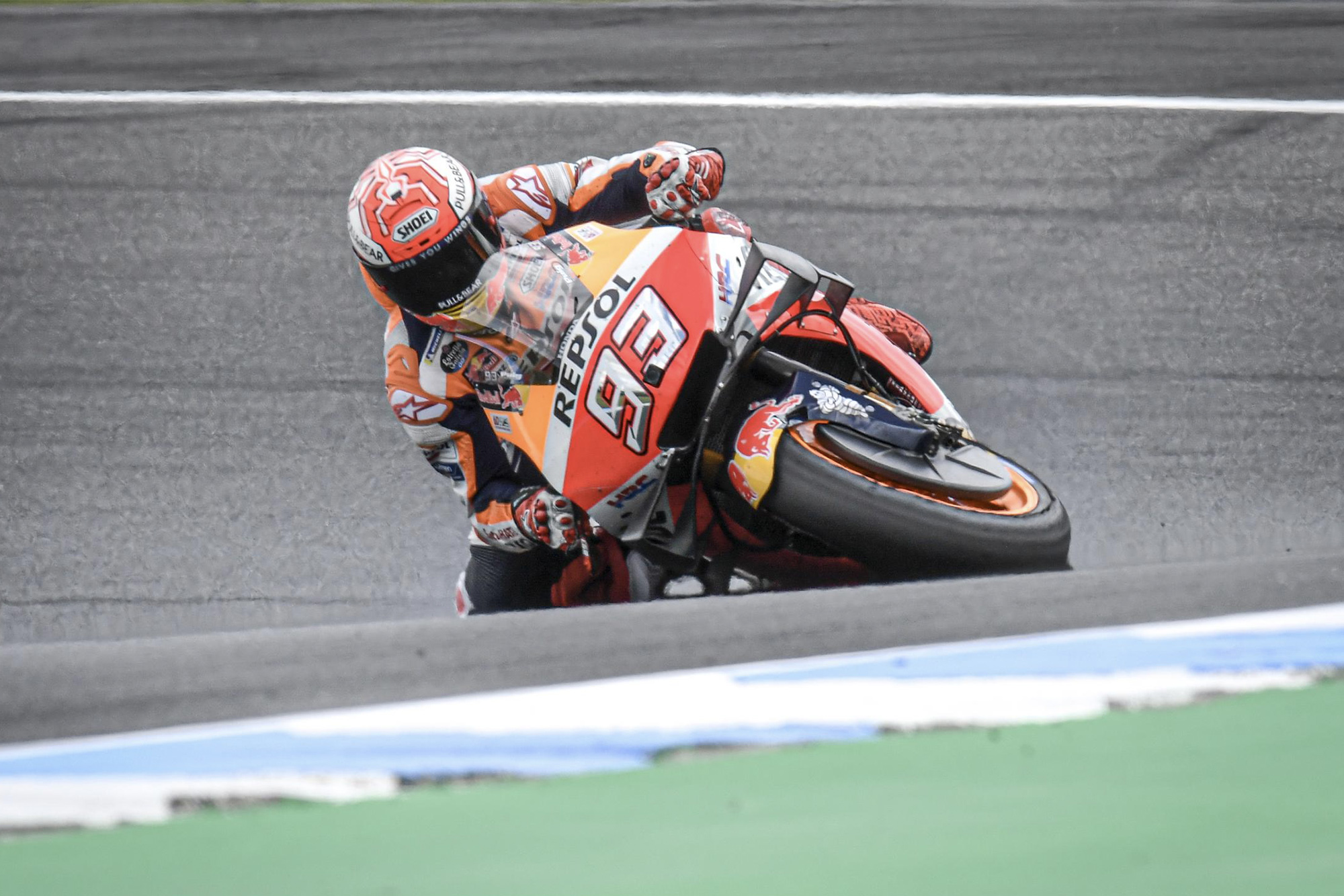 Márquez somehow saves himself from a fall at 70.2 degrees of lean Photo: MotoGP

Márquez may have been cheered when he climbed atop the podium but the crowd saved its loudest hollers for local hero ‘Thriller’ Miller, who won a last-lap dogfight for third to achieve his fourth podium of the year.

Miller’s ascendance has been special for all kinds of reasons, not merely because he was the last Aussie to climb Europe’s racing ladder the old-school way, before rookie cups and talent cups established a new world order.

In 2010, mum Sonya and dad Peter loaded a couple of bikes onto a boat and headed to Europe, looking for adventure and whatever came their way. The family camped its way around the Continent, living like gypsies, foraging used slicks from pit garages, then paying lower-order world-championship teams stupid amounts of money for Miller to race clapped-out 125s in GPs.

On Sunday Miller wore special leathers for his home race which made him look like a knight in shining armour, or Bulletman, according to Crutchlow. “I called Jack before the race and said, listen, just follow me, I’m going”, said Crutchlow. “Then when I saw his suit I thought the call hadn’t the best idea because he looked like Bulletman – I’m coming through!”

In fact, Miller had turned out as notorious 19th century Aussie outlaw Ned Kelly. “I wanted to be like an outlaw, a bank robber,” he explained. “So I sent a picture of Ned Kelly to an Italian designer and this is what I got back, so I’m a knight in shining armour, I guess.”

Kelly is one of Australia’s greatest cultural icons. The son of a transported convict he spent years in the bush, robbing, murdering and battling the forces of law and order. He wore a homemade iron helmet and armour for his final shootout with the police, in which he was badly wounded. He was arrested and later hung. As the noose was placed around his neck his reported final words were “such is life”.