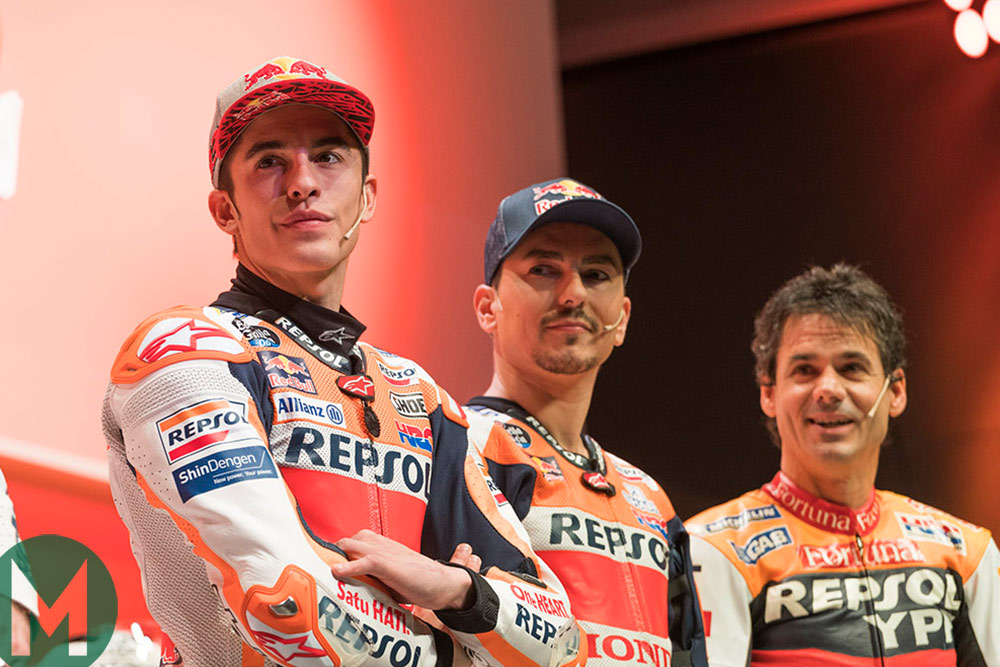 Most team launches are a bit, well, meh, because the future is like looking for Eldorado: it’s easy to promise all kinds of gold and glory before the journey has even begun.

During every team launch you will hear riders explain why they are looking forward to fighting for the title because they’ve got the best bike, the best team, the best sponsors, the best team-mate, the best of everything… It’s déjà vu-inducing.

Well, nearly every time, because some team launches are a bit special. Like today’s Repsol Honda launch in Madrid, which is historically significant: the first time in seven decades of Grand Prix racing that two team-mates have lined up for a new season holding the last seven premier-class crowns between them.

When you get beaten by someone from the same team riding the same bike, it’s much harder to take. And, of course, only one of them can win this battle

And funnily enough, apart from Ago’s reign on the unbeatable MV Agusta, only one team has monopolised the top step of the podium throughout a whole season – Repsol Honda in 1997, when Mick Doohan, Alex Crivillé and Tady Okada won all 15 races.

It’s not impossible that Márquez and Lorenzo could repeat that feat, except there’s a spanner in the works. The two most successful riders on the most successful bike are battling to be fully fit for the start of the season.

This is motorcycle racing – you sign the best team in history and then everything goes pear-shaped. Or as Scotland’s most famous poet Robert Burns had it, “the best-laid schemes o’ mice an’ men gang aft agley”.

Both Márquez and Lorenzo are unlikely to be fully fit for the first race, in Qatar on March 10.

Márquez has been off bikes, unable to ride, for the longest time since he was a kid, following an operation undertaken in December to fix his left shoulder, which dislocated multiple times last year. Then last weekend Lorenzo broke his left scaphoid, while dirt-track training in Italy.

“It’s been one of the most boring winters of my life!” grinned Márquez, who usually rides dirt bikes every day when he’s not riding his RC213V. “I won’t be 100 per cent for the Sepang tests [February 3 to 6] and my target is to be close as possible to 100 per cent for the first race in Qatar.

More: Lorenzo and Honda: will they win?

“The surgery was more aggressive and difficult than the surgeons expected. They said it would take a minimum of three to four months for full strength, but I’m working hard on it and every day I feel some improvements.

“At the moment the shoulder doesn’t have the power or the stability I want, so it will be important to start slowly, because I don’t want to have another crash and be back in the same situation.”

Lorenzo, who ended last season injured, had his accident during his first outing of 2019.

“My mistake was not checking the track properly, because some parts were very muddy,” said the three-time MotoGP champ. “The surface looked perfect, but the front closed in the mud. It was a very stupid crash because my wrist wasn’t completely healed from my Thailand crash, so it didn’t have full mobility, which put pressure on the scaphoid.”

Lorenzo will miss the Sepang tests and return at the second and final preseason outing in Qatar, from February 23 to 25. “I should be 80 to 85 per cent for the test and 90 to 95 per cent for the first race. I start physio on Friday.”

Even with a slow start, there’s little doubt that both riders will be in the championship hunt. Márquez has won five of the last six titles and Lorenzo was immediately up to speed when he first rode an RC213V during last November’s postseason tests at Valencia and Jerez.

“The Honda isn’t as physical as the Ducati, so in that area I won’t have so many problems,” added Lorenzo. “The bike feels smaller than my last bike, so it feels safer because you feel the ground closer to your body, which gives you more confidence, especially in low-grip conditions. The bike’s strongest qualities are agility and corner entry.

“The situation I’m in now is very similar to the situation I was in when I started MotoGP, in 2008, when Valentino [Rossi] was my team-mate. Valentino was at the peak of his career and he knew the Yamaha very well. Now I have Marc as a very, very strong team-mate who knows the Honda very well.

“I adapted quite well to the Honda in November, but for sure Marc will have a big advantage in that area. He’s a phenomenon and I have a lot of things to learn from him. I need to understand everything little by little and get results little by little.”

If Márquez and Lorenzo are the strongest pairing in motorcycle history; what motor sport partnership comes close? Possibly Ayrton Senna and Alain Prost at McLaren Honda in the late 1980s – the greatest drivers in the strongest team with the fastest car.

Most of us know how the Senna/Prost story went – the Brazilian and Frenchman fell out so badly that their clashes, motivated by more than sporting rivalry, will never be forgotten.

It remains to be seen how Márquez and Lorenzo will handle the pressure of racing each other from the same garage. Without doubt, wearing the same colours will change their relationship both on and off the track.

Getting beaten is never good, but when you get beaten by someone from the same team riding the same bike, it’s much harder to take psychologically. And, of course, only one of them can win this battle.

Whatever happens, it’s going to be fascinating to watch. And, of course, the people who should be really worried are Honda’s rivals, because the Márquez/Lorenzo partnership should make them even faster.

“Having someone strong in your garage is only a benefit to yourself and to the team, because the information you and the team receive will be better,” said five-time 500cc champ Doohan, who was at the Madrid event to mark the 25th anniversary of Repsol backing Honda’s GP team.

“And if you’re struggling you can have a little look at what they’re doing and then you can work out where you need to improve,” added Doohan.

Ducati and the rest may get a head start in Qatar if Márquez and Lorenzo aren’t at their best, but once the pair is up to full speed, it may just make an unstoppable force.