Many people thought the secret to MotoGP 2016 would be smoothness, but Sunday’s Argentine GP completely trashed that theory 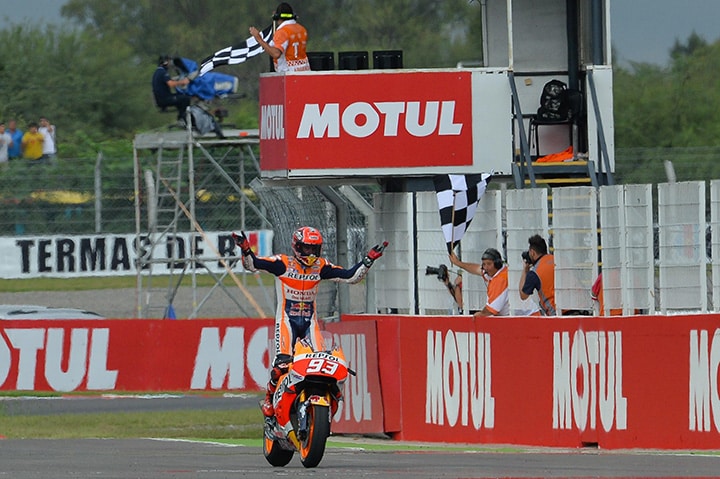 So much for all the preseason theories that the secret to 2016 would be riding nice and smoothly to get the best out of the lower-tech control electronics and lower-grip Michelin tyres.

Jorge Lorenzo’s flawless victory in Qatar allowed all those theorists (me included) to give themselves a little pat on the back. JL and the Yamaha are the kings of gliding through corners and that’s exactly what they did at Losail.

But Marc Marquez finished only two seconds behind the world champ and he already had a glint in his eye.

In Argentina the twice MotoGP champ looked very much like he had during his title-winning seasons in 2013 and 2014: the bike kicking sideways into corners and shaking madly on the exits. There was nothing smooth about his riding, but he was devastatingly fast, which suggests we may have got our predictions entirely wrong. 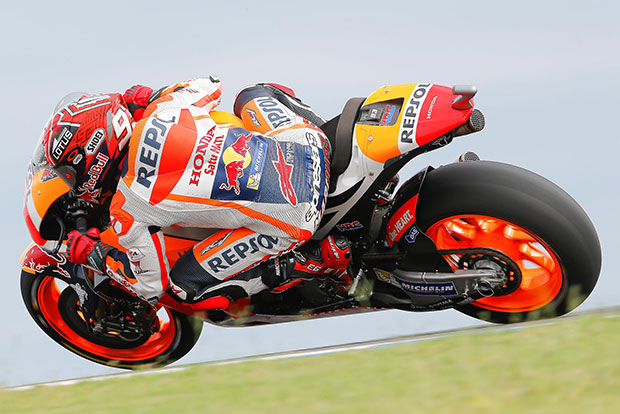 Perhaps MotoGP’s new technical era of French rubber and Italian electronics isn’t about carving perfect arcs through corners and putting minimal stress on the tyres and rider aids. Perhaps it’s about skating on the brink, and there’s no one better at skating on the brink than Marquez.

Even the 23-year-old went into last winter believing that the Michelins and Magneti Marelli’s little black box would require a smoother riding technique. But eventually he gave up trying to exorcise his inner wild man and returned to what he knows best: riding like a man possessed.

“During preseason I tried to change my riding style, but when you start to feel the bike and you are ready to push, you ride with your style and my style is always to push 100 per cent, to slide on the brakes to brake late,” he says. “We are still losing on acceleration, so I must push a lot in braking. I know it’s not the safest way to ride but I must ride like this if I want to stay at the top level.”

Watching Marquez back his RCV into corners is always fun, but he doesn’t do it primarily to entertain us, he does it to use the skidding rear tyre to reduce the load on the front tyre. He learned this trick with the Dunlops in Moto2, because Dunlop’s front wasn’t up to much back then. This may also be a crucial technique with Michelin’s front, which has nothing like the grip of the Bridgestone; so much so that some riders talk of skidding the front into corners.

At Sepang in February Marquez was still trying to change to suit the new tyres. “With the Bridgestones I could brake really late and find the lap time there, so now I try to change my style to brake late with the Michelins, but I cannot brake late like I did before.”

By the time he arrived in Qatar for the first race it was a very different story. “I am pushing a lot on corner entry, braking at the same point, or later, than I did with the Bridgestones.”

In Sunday’s ‘two-part’ race Marquez made easy work of the low-grip conditions, running away out front while the Yamahas were in all kinds of trouble; Lorenzo sliding off in the first half and Valentino Rossi lacking grip at both ends during the second half. 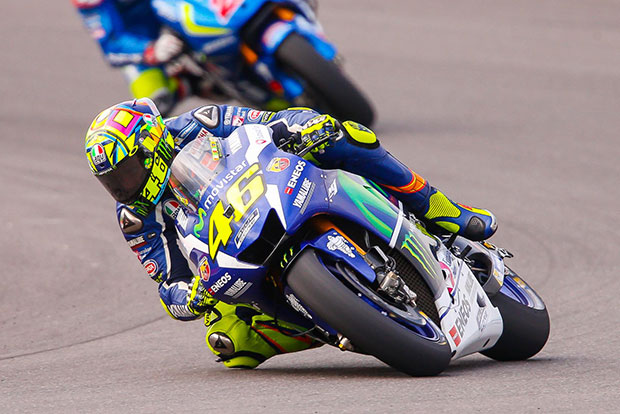 In winning the race by seven seconds he turned our theory upside down, and that’s what’s great about motorcycle racing. Motorcycles are strange things, which is largely what makes them so much fun and so fascinating. They are much weirder and more nebulous than cars, to the point that two plus two doesn’t always equal four.

The big question, of course, is how much of Honda’s success in Argentina was down to Marquez and how much to HRC? Progress in racing is always shared: the rider leads the engineers, who tailor the bike to his technique, which allows the rider to push a little deeper in a certain direction, which has him asking the engineers for more of this or less of that, and so the process continues.

What is beyond doubt is that the factory Repsol Honda squad has come a long way since the start of winter testing when they seemed to be groping their way into MotoGP’s new technical era. It’s a well-worn paddock saying that you should never count Honda out; yet this was exactly what many people did.

There was a good reason for this. In recent seasons Honda built MotoGP bikes that extracted more performance from Bridgestone’s MotoGP tyres than any other motorcycle: the last 800cc RC212V and the 1000cc RC213V were the perfect machines on the Japanese tyres. The RCV won the title in 2011, 2013 and 2014, and probably would’ve triumphed in 2012 if Bridgestone hadn’t changed the construction of their front slick halfway through the season. And Marc Marquez might well have won last year’s crown as well, if he had been able to ride fast and loose like he had during the previous two years.

Honda didn’t have an easy time getting the RCV to that point. They were the last of the factory teams to switch from Michelin to Bridgestone, making the change in September 2008, only weeks before MotoGP’s move to control tyres.

Then during 2009 and 2010 HRC turned the RCV upside down to make it work with Bridgestones – they experimented with different flex, front/rear balance, geometry, electronics, everything. In the early days of this transformation the bike rarely looked nice to ride: twitching nervously whenever the rider made the slightest of mistakes. But finally, step by agonising step, HRC perfected chassis stiffness, bike balance, electronics and its full-seamless gearbox to get the maximum from the ultra-stiff, ultra-grippy tyres.

When the RCV was in its sweetest spot with Bridgestones – perfectly tuned to the tyres, with the best electronics on the grid, with the correct engine character and with the only top rider who had learned his MotoGP craft on Bridgestones – it was just about unstoppable.

HRC engineers and Marquez had learned how to get the maximum out of Bridgestones, by attacking corners with jaw-dropping ferocity to make the winning difference on entry. Then last year HRC took a wrong turn on engine spec (a mistake hugely compounded by the development ban) and Marquez couldn’t ride as he had done in 2013 and 2014.

The RCV’s stunning speed with HRC electronics and Bridgestones was what convinced many people that Honda would take longer than the others to adapt to the Michelins and control software. The theory went that the RCV is more of a stop-and-go bike with a wild man of a rider on-board, so the Honda/Marquez combination would need a lot of grip at crucial points of the corner. It would struggle with lower-tech electronics and less grippy tyres, while the smoother-riding Lorenzo and his M1 would do better.

HRC’s forward progress most likely comes from the usual area – a little everywhere, which means frame rigidity, bike balance, geometry and electronics, plus the rumoured reversal of engine rotation (more of which at a later date).

So are Honda and Marquez now title favourites? Possibly, but possibly not. The only thing that seems sensible to predict is that this season is more unpredictable than any premier-class championship of recent decades. The tyres and electronics will have the pendulum swinging from one track to the next much more vigorously than usual, so this weekend’s Grand Prix of the Americas could be entirely different from Argentina, and maybe from Qatar too. 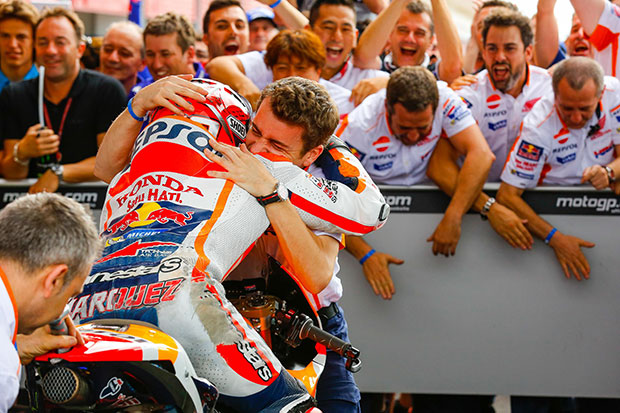 In recent years Austin’s COTA circuit has been a happy hunting ground for Honda and a place of considerable pain for Yamaha. Marquez is unbeaten at the track, while the best Yamaha has managed in three visits is a couple of third-place finishes. The concern for Lorenzo and Valentino Rossi is that the circuit chews the hell out of the M1’s front tyre. Last year both riders switched to a wider rim to spread the tyre and extract five or so extra laps from it, but at the cost of slower steering and heavier handling.

But that was with Bridgestone. Who knows how it will be with Michelin?