Maverick Vinales and Marc Marquez first raced each other 15 years ago. Now they are set to resume their battle, fighting for the biggest prize of them all 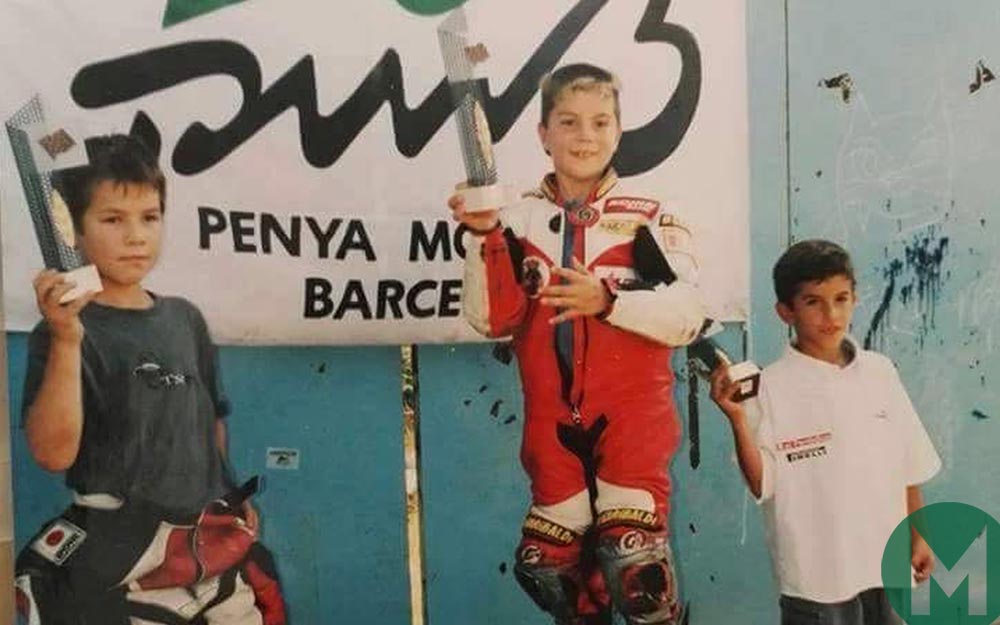 A picture is worth a thousand words, they say, and they are often right. The above photo shows three schoolboy racers: an 11-year-old Frenchman called Clement Dunikowski and a couple of younger Spaniards called Maverick Vinales and Marc Marquez.

If life is a game of snakes and ladders, Dunikowski climbed ahead of the others over the next few years, making his Grand Prix debut at Le Mans in 2006, two years before Marquez and five before Viñales. But as the Spaniards kept moving up the ladder, Dunikowski slithered down the slippery snake. He struggled to get backing and faded out of the sport.

The podium photo shows Dunikowski after he had finished second in a round of the Catalan 50cc Metrakit championship, organised by the venerable Penya Motorista Barcelona club. Seven-year-old Viñales won the race, while nine-year-old Marquez finished third. The date is autumn 2002, roughly the same time as Valentino Rossi wrapped up the first four-stroke MotoGP title. The photo suggests Marquez isn’t too happy with the result.

You can understand why. He is two years older than Viñales (though doesn’t look it) and had already graduated from 11-horsepower Metrakit bikes to slightly faster Copa Conti machines. At the end of the year the Metrakit series promoters invited him back for a couple of wildcard rides. However, Metrakit regular Viñales was fully in the groove on the bikes; hence the result. And no kid likes being beaten by a younger kid.

“We had a battle,” says Marquez, who has only a vague memory of racing Viñales around go-kart tracks. “We were at the same level, more or less. I think he won…”

Viñales’ memory is even hazier. “I can’t remember, it’s too long ago,” he grins. “Now we are together again at the top. Honestly, it’s strange!”

Marquez has better recall of the atmosphere of those minibike meetings. “After the races all the kids got together to play football and ride their bicycles and skateboards.”

It was almost 13 years later that the pair met once again on a racetrack, in the 2015 MotoGP series, Marquez the champion, Viñales the rookie. Two years on from that, they are all set to battle for motorcycling’s greatest prize. No more baggy leathers and tin trophies, this time the contest decides who gets to call themselves the greatest motorcycle racer on the planet and who gets to earn the most millions in booty. 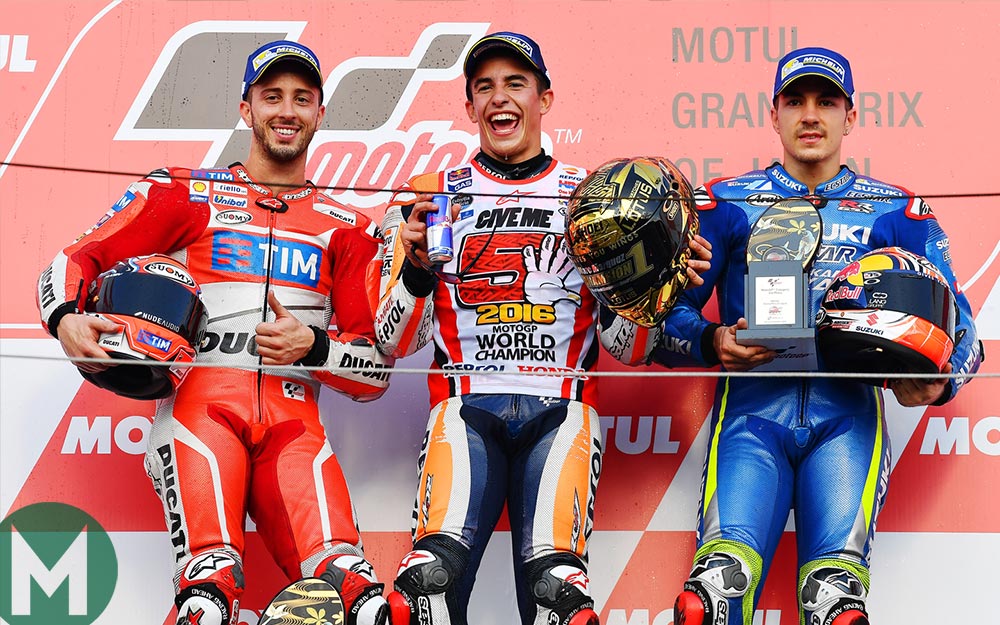 It would be easy to say that on that day in 2002 both men knew that one day they would meet again in MotoGP, but it wouldn’t be true. Most racers don’t have serious long-term goals; they take their careers two or three years at a time. MM and MV were no different.

Viñales was about the same. “Let’s say I started thinking I could be in MotoGP when I won my third race after starting in 125 GPs. That’s when I started to say, okay, I can do this.” That was at Le Mans in 2011, on the same day that Marquez won his maiden Moto2 victory. Always one or two steps ahead, until now.

Marquez, winner of three of the last four MotoGP crowns with Repsol Honda, knows what’s coming his way in 2017. “Maverick has a good mentality because he’s quiet, but on the racetrack he’s aggressive and he’s always pushing. He was already very, very fast on the Suzuki and now he’s even faster on the Yamaha. He is fast and consistent and he manages pressure, so he’s ready to fight for the title.”

Viñales has dominated preseason testing on his Yamaha YZR-M1 and will only get faster and stronger. He is learning plenty from Movistar team-mate Valentino Rossi and from crew-chief Ramon Forcada, who oversaw Jorge Lorenzo’s nine seasons with Yamaha.

“Looking at Valentino’s data the only thing I can do is improve,” he says. “For example, on some corner exits he uses the rear brake to damp things down and opens the throttle a bit later. Valentino is really good on acceleration, especially since the unified software came in.

“The Suzuki and Yamaha are a bit similar, they are friendly bikes, but I do need to change my riding style a bit. Sometimes I am too aggressive so I make the bike slide, which doesn’t work with the Yamaha. Also I sometimes brake too aggressively, so I am trying to work out where to brake so I can still turn the bike well and use corner speed. The traction of the Yamaha is really constant through the corners, so you can work a lot on entry speed and corner speed.”

“Ramon has so much experience. He teaches me how to use 100 per cent of the M1, plus he really knows the bike and which way it needs to go with set-up. I’m working with Ramon so I can be a little smoother in some situations.” 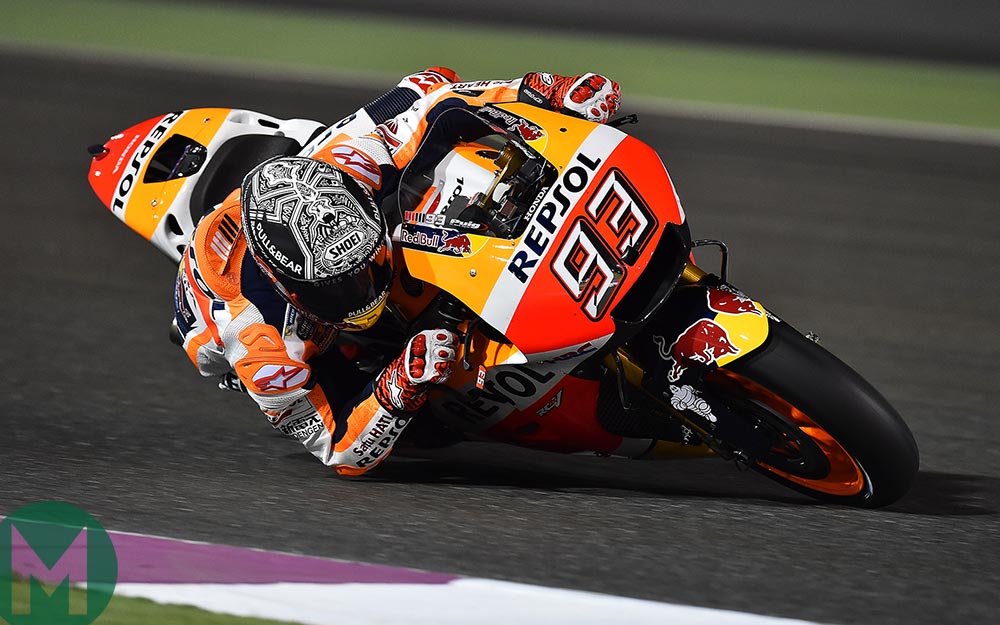 Both riders will race under huge pressure this year and you would have to assume that Marquez knows more about racing with the weight of the world on his shoulders. However, Viñales always seems ice cool.

Marquez and Viñales do have something in common: last year they were the master of Michelin’s front slick, which is arguably the most important skill needed in MotoGP right now. Marquez won the title largely thanks to his skill with the tyre, while Viñales was the only top rider who crashed fewer times with the Michelins than with MotoGP’s previous Bridgestone tyres.

That skill is part riding technique and part pitlane strategy.

“Last year I never pushed on the first lap with the Michelins, never,” explains Viñales. “Also, I tried to get really good information from Michelin, so if a rider crashed with a certain compound then we didn’t use that compound because we knew it might be difficult. Sometimes maybe you can go faster with a hard tyre, but maybe you don’t finish the lap. So we did our job to understand which is best. But now the tyres are really good; you get a warning from the front tyre.”

Michelin’s ongoing improvements, especially with the front, may allow other riders to go with Marquez and Viñales. On the other hand, Viñales may push Marquez like he’s never been pushed before, moving the pair onto the next level, so they will leave the rest of the pack way behind.

Perhaps the RC213V’s new big-bang engine will help Marquez do that, although it seems far from certain at the moment. “The new engine gives better traction at some points,” he says. “But it changes everything with the electronics, so we have much work to do.” 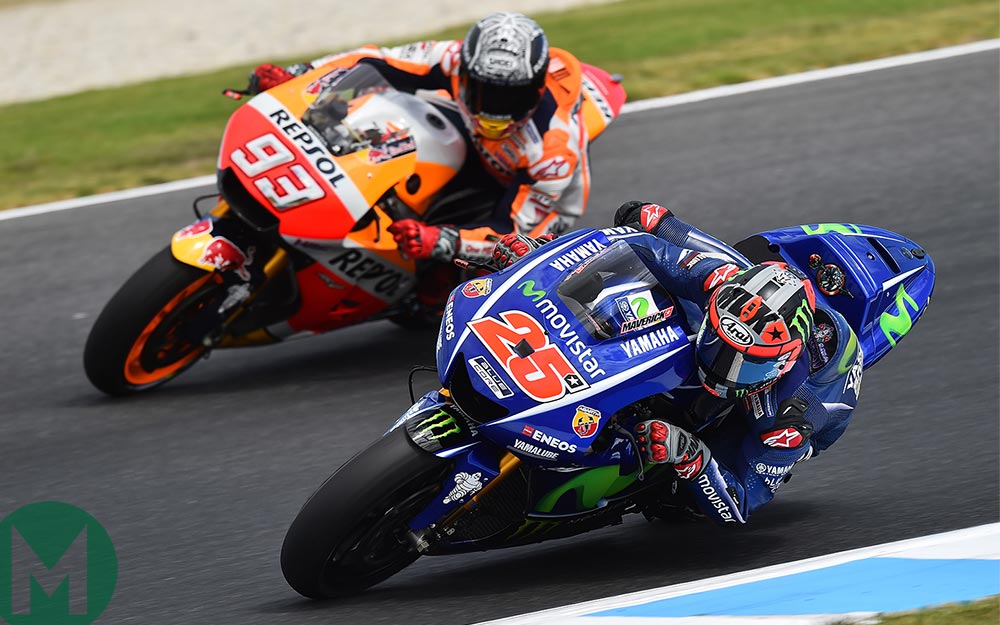 Their 2017 duel – aboard bikes that make 23-times more horsepower than a Metrakit minibike – is sure to be interesting.

Already there have been a few cross words. Marquez followed Viñales during a race simulation at Phillip Island last month and Viñales didn’t like it. But then again, Viñales did the exact same thing to Marquez during the earlier Sepang tests.

“I was just joking a little, just enjoying myself,” said Viñales at the time. “Already we are watching each other to see where we are.”

And both riders love a good racetrack skirmish.

“I think it will be a really nice battle,” Viñales adds. “We ride different. It looks like I have everything more under control on the bike, while Marc is a very aggressive rider, but when I have to be aggressive I am. If I need to put the bike there, I will put the bike there. I don’t have fear. Honestly if I need to overtake and I touch the other rider a little bit… you know, this is racing. I remember battling with Aleix [Espargaro] last year: in one race we touched maybe six or seven times, then at the end of the race we got off our bikes and smiled at each other.”

And we already know that Marquez is happy to both give and take in a battle. “I overtake aggressively, so I expect the others to do the same to me!” he grins.