During 2016 there were more than a thousand crashes in a MotoGP season for the first time in the sport’s history. What does this tell us about what’s going on? 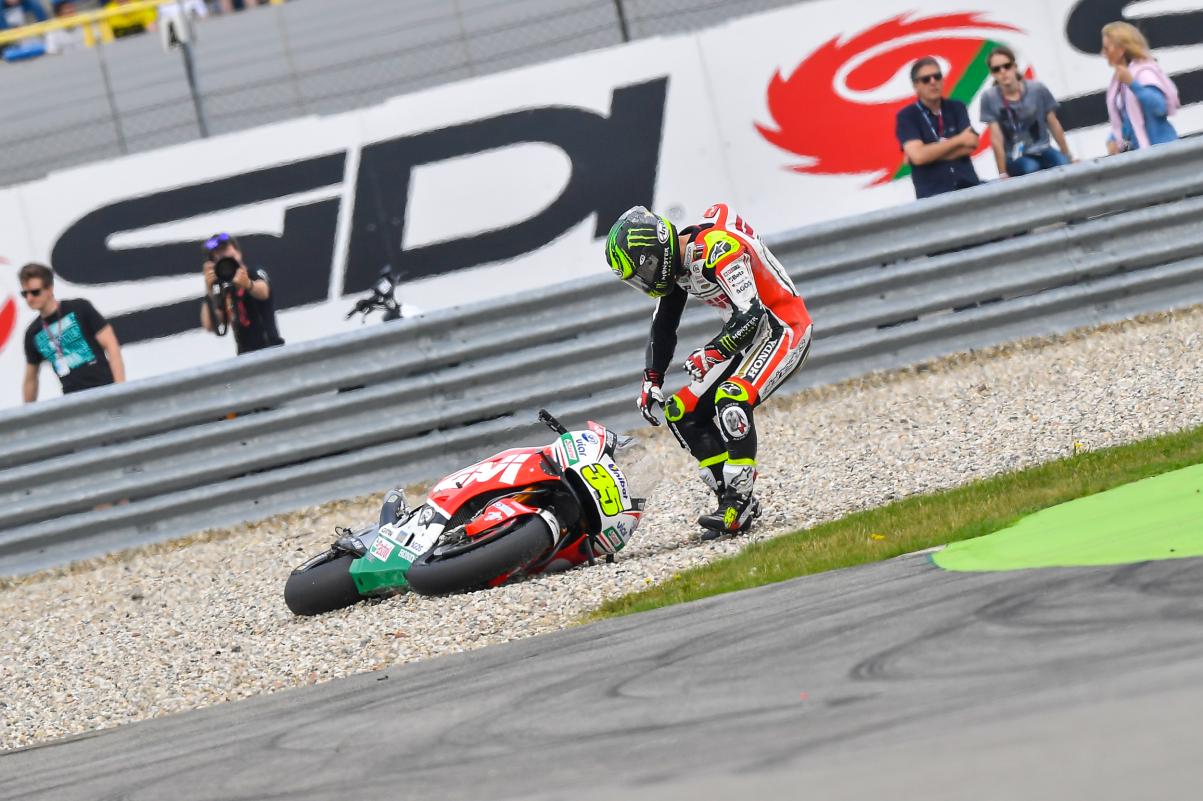 There are two ways to judge how a rider and his motorcycle are working together: how many times the rider ends up on the podium and how often he ends up in the gravel.

Inevitably, the two stats tend to be diametrically opposed. And rarely more so than in 2003 when Alex Barros scored one podium from 16 races at the cost of crashing his factory Yamaha YZR-M1 14 times.

Working out the sum of that glory-versus-disaster equation was an epiphany for Yamaha’s embattled race bosses; it was the moment when they realised they better get serious and spend some proper money to build the best bike and buy the best rider, or otherwise take the M1 home to Hamamatsu and never come back.

During his first sojourn at Yamaha, Rossi crashed his M1 on average 4.5 times each season. When he defected to Ducati he suffered much like Barros had done eight years later: Rossi dumped the Desmosedici 12 times during 2011, an almost threefold increase, for the sake of one podium.

So you see how the glory-versus-disaster equation often adds up to the truth; which underlines the value of the annual crash report published by Dorna and motogp.com. 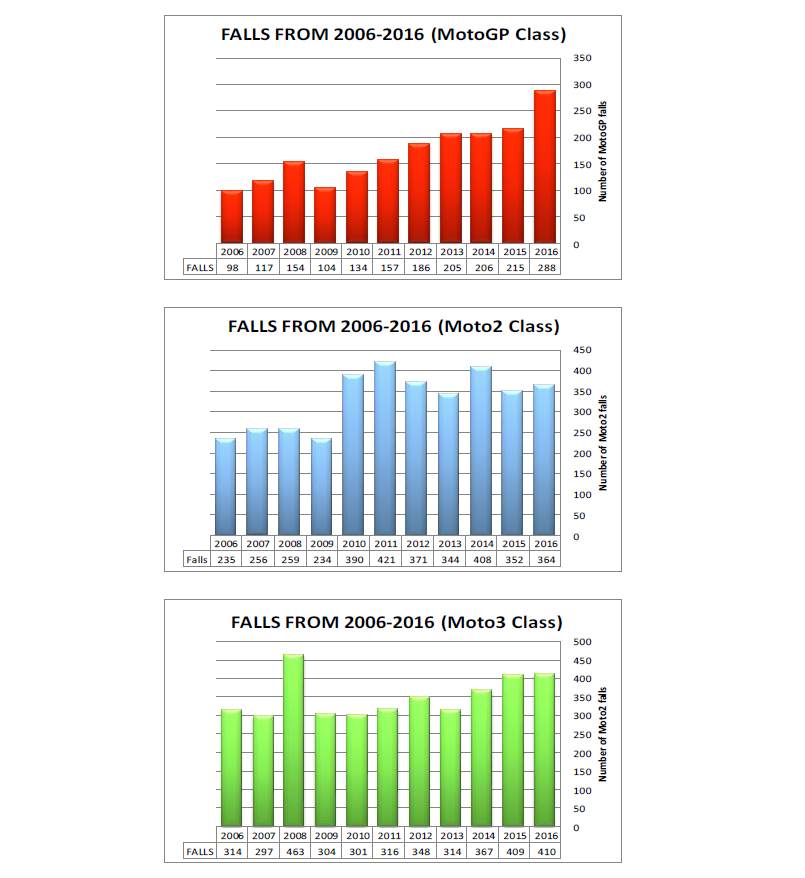 This year’s MotoGP crash report, painstakingly compiled by MotoGP media officer Friné Velilla, marks a historic and painful milestone in motorcycle Grand Prix racing: the first time there has been more than 1000 crashes during one season.

The most remarkable fact about this remarkable statistic would’ve been the remarkably low injury rate (one broken fibula, six broken fingers, three wrists, four collarbones, three feet, two hands and three vertebrae, plus five dislocations and 11 concussions) had it not been for the loss of Luis Salom during June’s Catalan GP.

Despite ever-improving circuit safety, riding gear and machinery, MotoGP has lost one rider every two years over the past six seasons. That’s a horrible statistic that seems to fly in the face of logic. The deaths of Shoya Tomizawa and Marco Simoncelli, both hit by other bikes after falling, were essentially unavoidable; not so Salom, who lost his life at a corner about which riders had already expressed concerns.

During 2016 there was a total of 1062 crashes cross all three classes, an average of 59 accidents per Grand Prix weekend. Ten years earlier the season total was 747 falls, or 40 cashes per event. And in 1997, when the stats were first compiled, there were 496 tumbles, or 33 per Grand Prix. In other words, the crash rate has doubled in two decades, which must be excellent business for the carbon-fibre, aluminium and paint industries. And for surgeons too, some of whom make more headlines than some riders.

The steady upward trend in the number of crashes isn’t because riders have forgotten how to ride or because engineers can no longer build bikes that go around corners properly. There are two big reasons for the upward curve, both the unintended consequences of changes to the sport.

You and me, primarily. We want close, exciting racing, that’s why we turn on the television or make trackside pilgrimages. Dorna know that’s what we want, so they’ve adjusted the technical regulations to equalise the machinery and make the racing closer. Nowadays, every thousandth of a second counts, so riders must risk it all or get nowhere. That’s the first reason they crash so often. 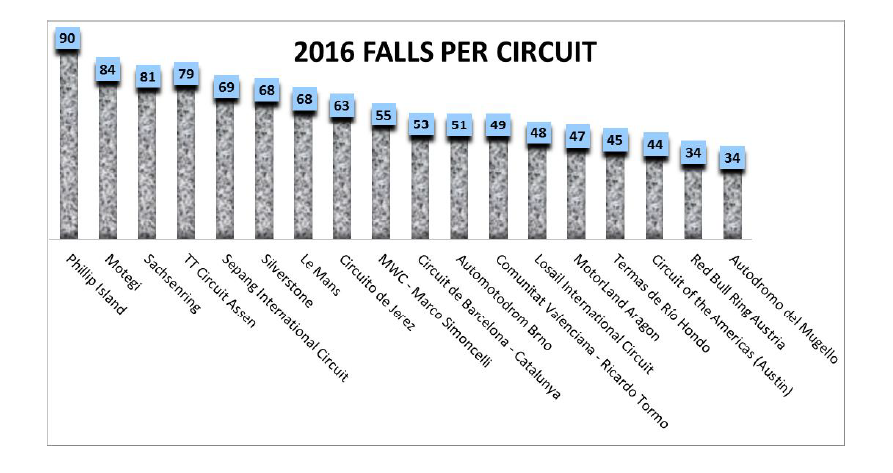 Secondly, and ironically, the riders crash more frequently because the tracks are safer, so they are happier to ride beyond the brink. Tarmac run-off makes risk-taking more attractive than ever, because when a rider overdoes it, he will probably run wide and lose a second, rather than 10 seconds or more extricating himself from a gravel trap. And the increased run-off makes riders less fearful of the consequences of a crash (Salom’s death was caused by a rare oversight in this area). When Grands Prix were contested at scary tracks like Suzuka, Salzburgring and Spa-Francorchamps riders took less risks because they knew the outcome of a crash would most likely be horrific.

During 2016 the premier MotoGP class suffered the largest increase in crashes. This was mostly due to a change of tyre supplier. You could blame Michelin but you should also blame the single-tyre rule, another effort at equalising machinery to offer us more exciting racing. The biggest negative of this rule is that whenever MotoGP changes tyre manufacturer, riders must pay the price for a year or so while the incoming tyre supplier gets up to speed.

Most 2016 MotoGP crashes were front-end low-sides, which usually hurt less than rear-end high-sides. You won’t find a racer alive who prefers a high-side to a low-side. (Incidentally, most racers suffer crash nightmares: you’re having a snooze on a plane when you are jerked awake by a massive highside and your fellow passengers look at you aghast, like you’re some kind of maniac.)

During 2016 Michelin’s front wasn’t as good as Bridgestone’s front, which was a ridiculously good tyre. But the Michelins were fast enough to break lap and race records at Qatar, Misano and Valencia. Meanwhile Michelin’s rear was usually better than Bridgestone’s. Expect much better things from the French company in 2017, when its engineers will have the experience to roll out suitable compounds at every circuit. 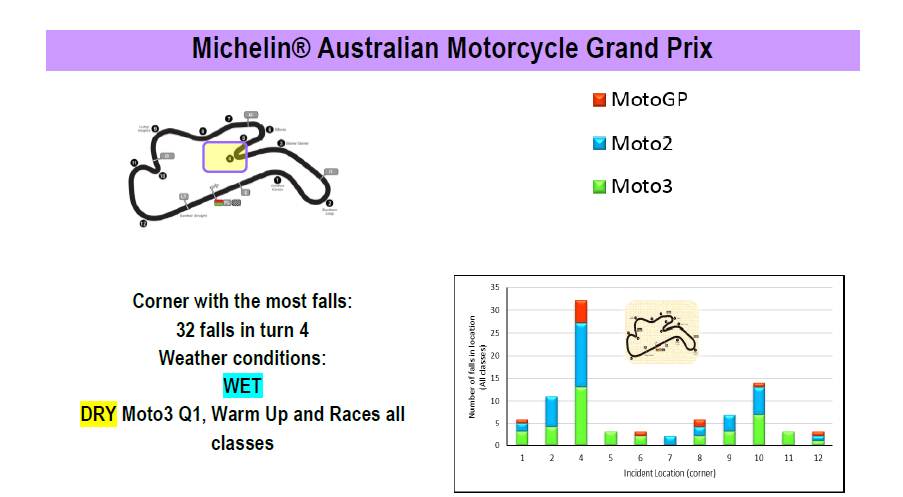 Sam Lowes gets the wooden spoon for the most crashes, just ahead of Gabriel Rodrigo and Cal Crutchlow, so at least each category makes an appearance on the podium of shame. I should add, that Crutchlow says he doesn’t trust the stats! 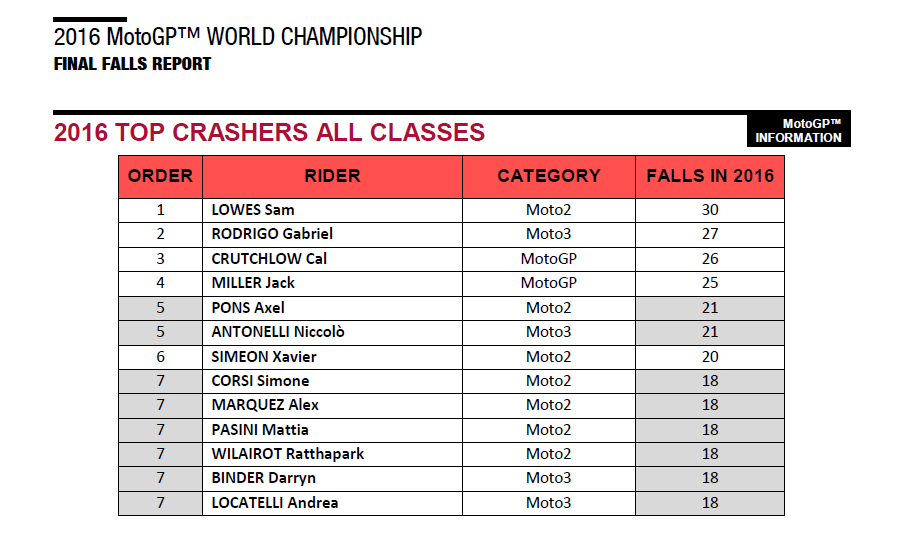