Freddie Spencer on the MotoGP Grand Prix of the Americas in Austin, Texas 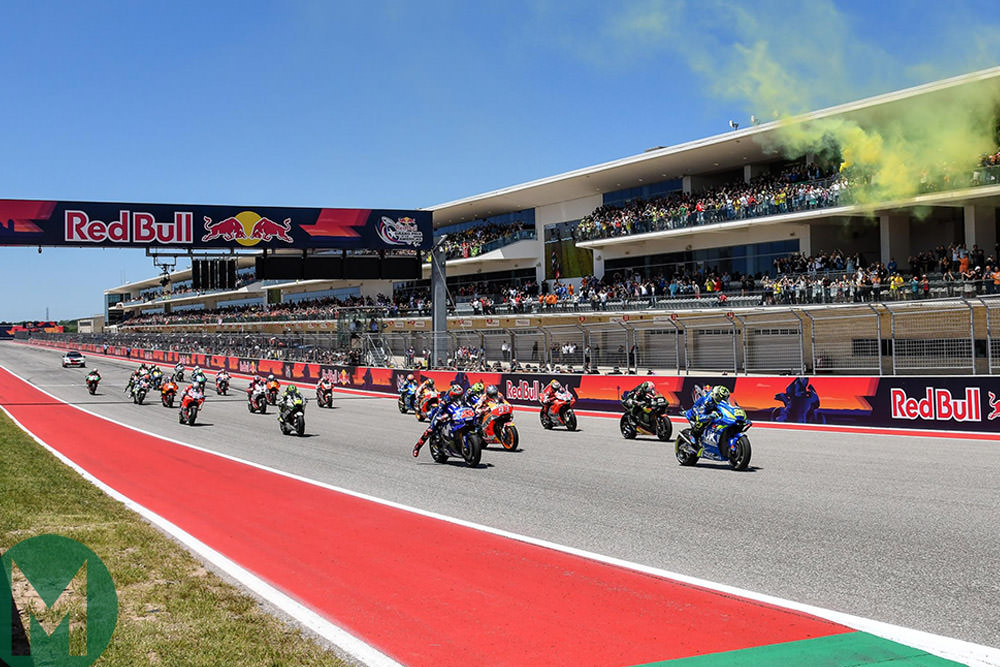 This is Freddie Spencer coming to you after the fourth round of the 2018 MotoGP World Championship: the US Grand Prix at the Circuit of the Americas in the beautiful city of Austin, Texas. Now I say Austin, Texas, and it’s beautiful because it’s really a great destination and if they were going to build a track in that part of the world they couldn’t have picked a better place because there’s so much to do. A good friend of mine, the country-Western singer Lyle Lovett, he’s always there testing out his music in a certain part of Austin on a show I watched since I was a young man called ‘Austin City Limits’, and it comes on every Saturday. A little bit of trivia, but, if you get a chance to go there, it’s a really great place to visit.

Now, talking about the circuit when it opened in 2012, the first race was the Formula 1 race – the US Grand Prix – and it was beautiful, as they spent a tonne of money on the facility. It’s an interesting racetrack, absolutely, and they’ve been running the motorbike Grand Prix there since 2013, and they’ve been running a lot of events with a lot of cars on the track, which can cause a lot of stress on a racetrack. It can create what we call ‘stutter bumps’, especially at the entrance to corners under heavy braking as the cars are pretty heavy. Like I said, they run a lot of sports car events there, a lot of track days, and so there’s a lot of wear and tear. The temperature change in that part of the country, even though it’s in a southern part of the United States, gets a lot of variation: very cold and then it’ll warm up and be very hot the next day, so again, it puts a lot of stress on the track.

You’ve probably heard that there were some complaints last year when the riders were talking about the stutter bumps and mainly a lot of rolling bumps. Those are the worst kind, because it creates a lot of instability on the bike, especially at high speed. There are a lot of high-speed corners and so one of the things they do when they don’t want to repave it is grind it down, and on Friday, there were a lot of rocks as a result. Jack Miller was talking about that, Valentino Rossi complained about it and at the end of the day, most of the riders did. They’re going to have to address it, and it’s our only US Grand Prix and I would really hate for something to happen and us to lose that, so let’s hope they can address some of the issues and maybe get the money – whatever needs to be done – to fix those problems. Certainly, with the bikes and the horsepower they have today and the speed that they go, you can’t really blame them for wanting to run on a track that is consistent and not bumpy.

Before I get to that, Randy Mamola was inducted into the Legends Hall of Fame – I couldn’t be there, I had another event in Italy – but it was an incredible thing for Randy. It’s about his contribution outside of racing, what he’s done for riders and their health with Two Wheels For Life. It’s a great cause and so I was really glad and I want to give a shout out to him. He gave an incredibly impassioned speech that showed why he did it and why it matters, and I think we all can contribute, and it’s one of the things that I believe in, and that we share through motorcycling. It’s great Randy, congratulations.

Now, talking about the race weekend: coming off Argentina there was a lot of uncertainty. Firstly, Valentino and Marc were not invited to the press conference and, in fact, did their own separate ones. Marc dug his heels in and talked about how everything that happened in Argentina inspired him to even be more motivated to do well. It’s something that I said about Marc for a while, around five years ago, and I just understand the drive and determination required. I was like that myself, and you feel like that that you get pushed even harder sometimes when you need to – it’s not discouraging.

That track suits him, so it was a perfect place and he showed that in practice. His race pace was right there and he didn’t seem affected by all of the outside distractions and drama that pretty much everybody talks about and I talked about in the last Rider Insight. Rossi talked about putting that aside and moving forward, and although nobody’s going to forget about it, Valentino said that he didn’t want to deal with Marc about it. Hopefully, they’ll put it aside and as I’ve said before it’s really more about the sport. We have to keep in mind that we have a responsibility to come in and be involved, absolutely. The reason I get to do events with riders and drivers is because of what Grand Prix racing gave me, and we always have to make sure to remember that. You want to leave the sport better than when you got there.

Let’s touch on the others in practice. Andrea Iannone may be a little inspired after seeing his team perform so well in Argentina, which is great. We know he has the speed; he just has to get the consistency and do it for more than one lap, or a couple of laps. In practice, you could see he was right up there in each session, and he did a good job in qualifying too. Marc was right there too, and the Yamahas too – Maverick Viñales said that he may have a handle on the 2018 bike which is very important. If he can believe it- mindset is everything. If you have that belief, the clarity then comes and you can focus on what needs to be done, not over complicate it and to be able to address the issues and go out and ride the motorcycle. And that’s what looked like the big change this weekend from Maverick. That was really good from Yamaha. Valentino Rossi was also right there in qualifying, and Dani Pedrosa had a great performance as the top Ducati.

It looked like Jorge Lorenzo was going to turn a corner a little bit if he could out-qualify Dovizioso but, again, qualifying is one thing and the race is another.

But the rain on Saturday, it threw a little bit of an interesting wrench into everything, because conditions as they were on Friday and Saturday limited track time. Tyre choice was going to be an important thing for Sunday, with the best weather of the weekend. The last thing about qualifying was what happened between Maverick and Iannone, and why they did it but Márquez has to feel like ‘when is this going to end?’ Well, he makes choices, you know, and riding is one thing and he obviously thinks that’s not even an issue but you have to choose your moment. What I feel like happened on Saturday was certainly not on purpose. I think with his crash, and then how he came and got back on track and with everything that happened in the last race, there was a lot going on. I don’t think he saw Maverick, but I understand why the stewards felt they needed to do something.

The race organisers, Dorna, are trying to get a handle on things and don’t want what happened in Argentina to happen again, which is good race direction. That’s their responsibility, to make sure and clamp down on any issues that might unfold.

Cal Crutchlow went into this race leading the world championship after three rounds and he certainly had high expectations after winning in Argentina. He even said after qualifying – because the tyre is a lottery because of the variation and consistency – you might get the same tyre and two may be the same, and one may not. That’s what Cal felt, that the second tyre he put on in qualifying didn’t perform for the entire lap. In fact, he said it was moving around on the right side specifically. There was really no traction, no grip, and he didn’t qualify that well and felt that he should have been in the top six, which would have made a difference at the start of the race instead of where he ended up qualifying.

But the race is the race. And at the start even though Marc got penalised but it didn’t really make much of a difference as he took the lead after a couple of laps and was basically on his on from there. Again, Maverick and Iannone had great rides, though, unfortunately, Crutchlow crashed.

Jorge – what can you say? This is the worst position he’s been in since he’s been in MotoGP and he was so far back. Miller, who was outstanding, talked about how he had a mountain bike crash after the race and his cracked collarbone and torn rotary cuff. And he beat Jorge. So, we’ll have to see what will happen over the season.