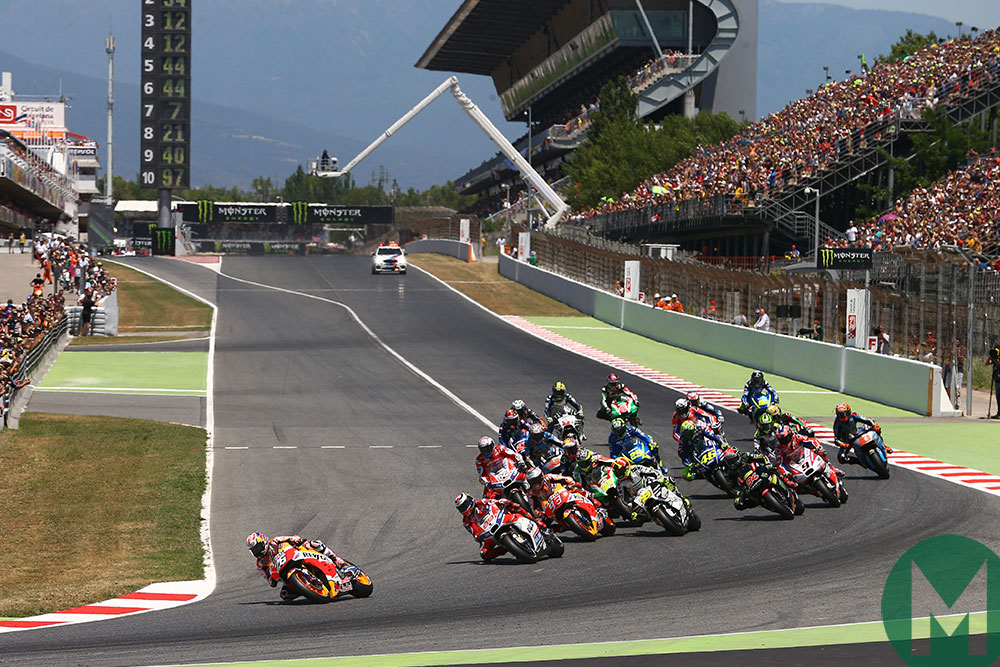 This was the second of four MotoGP rounds that will be held in Spain this year, at the Circuit de Catalunya. Now the Barcelona circuit is one that I actually experienced for the first time in 1982, and they were just beginning to host Grands Prix at that circuit.

It’s a really challenging circuit for a number of reasons. They have repaved it, which has helped, but they’ve also had some dramatic layout changes to the final two corners leading onto the front straight. It’s become safer too, ever since Moto2 rider Luis Salom died there in 2016.

So they’ve started using the Formula 1 hairpin in the final sector of the circuit – and that’s one of my favourite parts of the circuit because I love momentum and precision, which is what those last few corners are perfect for.

New lap times and benchmarks were set this weekend on the new layout, and it was certainly interesting.

One thing that was guaranteed was the heat this weekend, and with so much time being spent on the right-side of the tyre, it was imperative to choose the correct tyre, set-up and the electronic balance on these bikes. And riders had to manage tyre wear by carrying speed properly into the corner and using the throttle correctly. The ability to manage wheelspin through the use of electronics and mapping that can be changed on the fly were also important.

It’s a balance of maximising speed for one lap and, most importantly, consistency lap-after-lap. You don’t see that – for example – with Andrea Iannone for Suzuki, who was right up there in the sessions with Andrea Dovizioso and Jorge Lorenzo but struggled in the race. Why is that? For example, Lorenzo (in the last year and a half before we got to Mugello) seemed to put in good laps at the start but as he battled with others and was passed by a few riders he faded back a little bit. That may have been a result of poor balance, because as soon as grip went away he lost momentum, but some of it might have been due to discomfort; being able to fight back, maintain belief and keep fighting.

I‘ve always believed that it’s your mindset, your comfort level, your confidence and desire that make the difference. You can have desire but maybe not have that little bit that keeps you charging and fighting back because you believe that it’s not worth it, that it’s not going to pay off during a particular lap and a particular race. Maybe that’s what we see with some riders. They show that the bike has speed in short-runs, but they can’t push and stay in that top group in the race. It’s just the reality of what riders face in the way of focus and ability.

It’s easy looking back because you can reflect and remember on your riding. But my years riding in my yard for four or five hours a day for 10 years, taught me technique and focus. It taught me how to get into that zone riding with a flip of the switch. That was always one of those things, when I was at my best for those years, even before GP racing, that was one of my strengths. It’s certainly what you see with Marc Márquez and Valentino Rossi on race day. They may struggle in practice and make mistakes – like Márquez, who has crashed before – but on race day they simplify and make clear exactly what they’re focused on and have the discretion and discipline to dial it back in that environment.

Some other riders that put in a quick lap in qualifying and practice can push hard on race day, but are they able to balance that out and push for the whole race? I think that’s where they struggle. So their gaps and lap times are more dramatic, and that’s what you see in the race, five, six or maybe more than 10 seconds back.

We see with Lorenzo that he’s been brilliant with consistency in the past few races. At Mugello he was lapping in the 1min 48secs, which was almost perfection, and he showed the same thing in Barcelona. He not only had the speed but the fight as he did with Márquez, but the most important thing was the ability to turn those laps out, lap after lap, and when you’re in that zone as he is, it’s about as good as it gets. And the top riders are able to do that more consistently, week-in and week-out. That’s what separates the great riders from the good riders.

Qualifying was a continuation of last weekend, with Dovizioso and Lorenzo on the two Ducatis and Márquez up there as usual. Iannone put in some good runs but it was basically Lorenzo and Dovizioso who put in the great, consistent laps. Maybe he was feeling the pressure of Lorenzo’s increased performance, which we saw in the race. He said that he wasn’t feeling the pressure but I don’t think he can help feeling it. Last year he came so close to winning the world championship with a number of wins but this year he’s made some mistakes that he didn’t make last year. He talks about the change in the front Michelin – is that affecting feel a little bit? The margin of error and forgiveness that the front-tyre gives, if it changes while you’re running on the edge of control – which all the riders are – then it could affect the rider. You see it with a lot of riders who try and charge and tuck in the front, which is where Márquez crashes in practice. Maybe that’s also affecting Dovizioso, but I certainly think he’s feeling the pressure exerted by Jorge and his run of form.

The Yamahas, especially that of Maverick Viñales, had a good run. He said to the press that Yamaha promised a top bike for him and he doesn’t feel like it delivered. That’s where he needs to be careful, because he’s had a good run with Yamaha in terms of their relationship, and he came out of the blocks with those wins after testing. He seemed focused and calm and moving forward, but now he’s all over the place so let’s just hope that he can get it under control.

Johann Zarco: where is he now? You can see with the crashes that he had and a couple of runner-up finishes that he’s been under pressure, as he was at Le Mans. He’s really not been there in the last few races. Maybe he’s thinking ahead to KTM.

Dani Pedrosa is a rider who I expected to come out this weekend after the result at Mugello, where, let’s face it – I said this after the broadcast – he already knew what was going to happen. It distracted him in qualifying and he crashed in the race, which isn’t a usual Pedrosa performance. This weekend I expected him to improve, and he did that.

As we got to the race, was it going to be another Lorenzo domination?

Marc and Jorge got off to a good start, and maybe it’s a prelude to next year with both of them on the same bike. I know that Marc wanted to win the race in front of his home fans as he’s from the Barcelona area, but he also wanted to protect his championship lead, which is what a world champion does. He battled, pushed Jorge and made a pass – but Jorge came back and stretched his lead. He ran a great race on the Ducati and the rest of the season will be fascinating, if he can not only become a figure in the championship and make a run for it. But he’s a bit of a way back from Márquez and Márquez knows what to do.

Valentino Rossi had another great performance, getting on the podium, and for the 39-year-old to be the top Yamaha in those tough conditions showed what he can do. Viñales struggled and picked it up later in the race, but it was a little too late to get onto the podium.

Championship hopes have faded by the wayside for Dovizioso, but maybe he can step it up as we go along in the season. Cal Crutchlow, however, had a great performance and I wanted to mention that because he’s struggled since he briefly took the championship lead. Quite a few races ago he had some crashes but he’s pushed along.

Alex Rins and Iannone on the Suzuki struggled, and for Rins, it seems like his bad luck is continuing.

As the season goes on it’ll be interesting, and we’ll see if the Yamahas can step it up for the Dutch GP or if Lorenzo can continue and make it a three-peat. We’ll see if Márquez can challenge him, and I’m looking forward to that.