Freddie Spencer looks back at the Italian Grand Prix at Mugello. It was a popular win for Dovisioso while Rossi struggled with his injury. 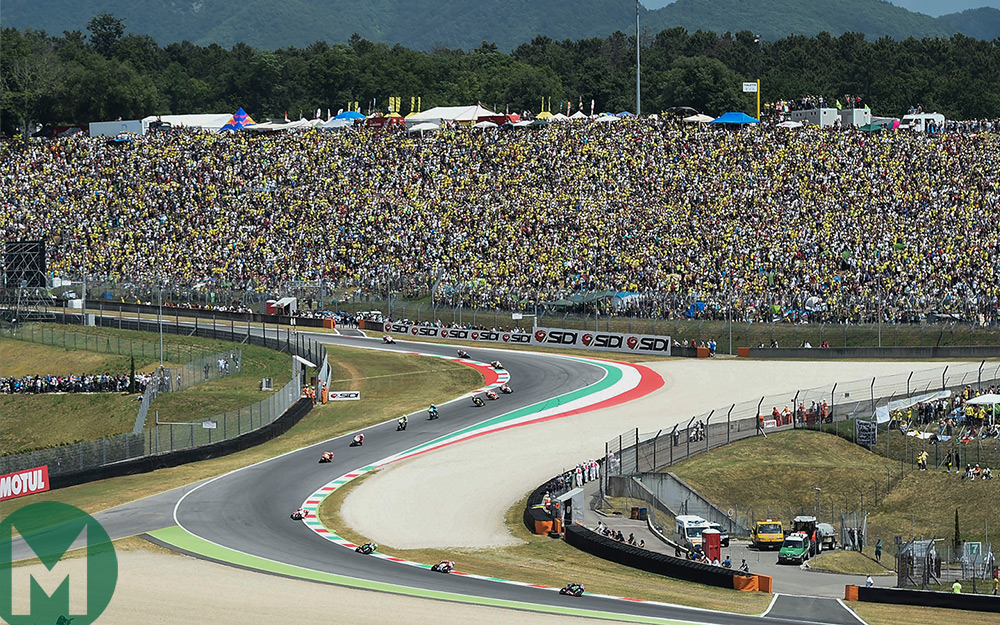 The challenge of Mugello

The Mugello circuit is one of my favourites. You dream as a kid to one day win Grands Prix in Italy and I’ve won at Monza and at Mugello. It’s in the Tuscany part of Italy and the amphitheatre that is created there, especially on the first part of the track with the fans, is just amazing. It’s a very challenging circuit for the riders and their machines. There’s a lot of direction changes and many different speeds of direction change, there’s the way the corners fit together and then there’s the heat.

I can remember when I won my first Grand Prix in Italy in 1982. It was called the San Marino Grand Prix and it was the second Grand Prix in Italy that season. It was so hot that the champion that year Franco Uncini wasn’t able to even finish the race. He came into the pits a little past half way with heat prostration. He was so hot and many riders had difficulty finishing. But it’s always like that there and that’s part of the challenge. It’s certainly a challenge for the tyre manufacturer, and we’ll talk about that a little bit later.

Qualifying was definitely interesting, one with the uncertainty of Valentino Rossi. We all know the motocross crash that he had, he was very fortunate and happy that he wasn’t hurt any worse. He spent the night in the hospital and you could tell with the uncertainty of the news coming out of there that he was maybe hurt a little more than they anticipated. Luckily no bones broke, but it was obviously a tremendous impact on the chest and it caused him concern, but he was there. In practice you could see he was a little tentative with his movements, but in qualifying two he was right there.

In qualifying one, Johann Zarco waited until the last minute and there are reasons why. He runs a soft compound front and rear and you’re only allocated a certain amount for the weekend and he wanted to save it. He waited until there were only a few minutes to go in the Q1 session before he went out and ran a quick time to get into qualifying two, which you could see was his main goal. In qualifying two he didn’t run the same speed that he ran in qualifying one, which was interesting. As much as anything, he was saving his soft tyre allocation.

In qualifying two, Valentino Rossi – what an incredible pace. There’s nothing like the excitement of the Italian fans for their Italian hero, and you could hear it. I was watching on the screen in America and the excitement was amazing, it just builds up. But at the very end Maverick Viñales put in that quick lap. He’s the championship leader and he showed why. Even under that pressure at the Italian Grand Prix and listening to the crowd, because he was in the pits when Valentino did that, he went out and calmly put in that lap to get pole position.

New tyre compounds and a tough race for Honda

It was always going to be a challenge for the weekend and this was the first time they had the harder construction front tyre for the riders to choose. Almost everyone chose soft and mediums and the hard, except the Honda riders who chose the medium-compound/multi-compound tyre that is harder on the right and softer on the left side. It seems that the Honda riders were the ones that seemed to struggle with that.

Cal Crutchlow talked about that afterwards, after what happened in the race on the last lap with him and Dani Pedrosa. Dani lost the front, crashed and Cal was very upset as it was obviously the last lap of the race. Dani didn’t do it on purpose of course. The headline was ‘why do Honda riders even show up?’ because of the struggles with the tyres and suggestions that maybe Michelin brought something specifically to help the Ducatis because it was Ducati’s home track. That’s not so much the case, but you can certainly understand his frustration.

There are other issues, not just the tyres, that the Honda riders are dealing with. They’re dealing with a machine that is difficult to ride and they have to ride it very aggressively. That’s going to come through on a hot track like that, a very demanding circuit. Other issues are going to pop up and one of them is obviously the tyre situation. It will be interesting to see what is going to happen now.

Michelin is bringing different tyres every weekends for different circuits – different compounds, not so much different construction. Some weekends it’s going to benefit one machine better than another; that happens. It happened back in my day the same way.

What an exciting race it was with Valentino Rossi and Maverick Viñales getting a great start and up front. It looked like Valentino was going to be there all the way to the end but, with injuries from that motocross accident, it was understandable what happened. He faded late in the race and he did what he needed to do, which was to finish in the top three and move on to the next race.

Maverick Viñales was doing what he needed to do and it looked like he had the race pretty much under control. Lorenzo had a good start but faded as the race went on, but you always suspect with the Ducati that as the tyre goes away, the weaknesses of the Ducati will show themselves and they’ll maybe fade a little bit, but it wasn’t the case on Sunday.

That was a great race by Dovi in front of the Italian crowd and basically on Ducati’s home track that they test on all the time. Pirro tests there all the time and you can see that from his great performance over the weekend. You can’t take anything away from him, it was certainly a great performance.

You can see that contrast between Lorenzo’s performance and Dovi’s. We know that Lorenzo is struggling getting used to the machine, but you could almost see it as Valentino made that aggressive re-pass. You could see Lorenzo just starting to fade back. Who knows why, but he’s certainly going to have to get used to it pretty quickly here if he wants to salvage his season and compete for more than just a podium, but for a race win.

Dovi – what an performance. I’m very happy for him and I look forward to the next race. I hope to see you then.