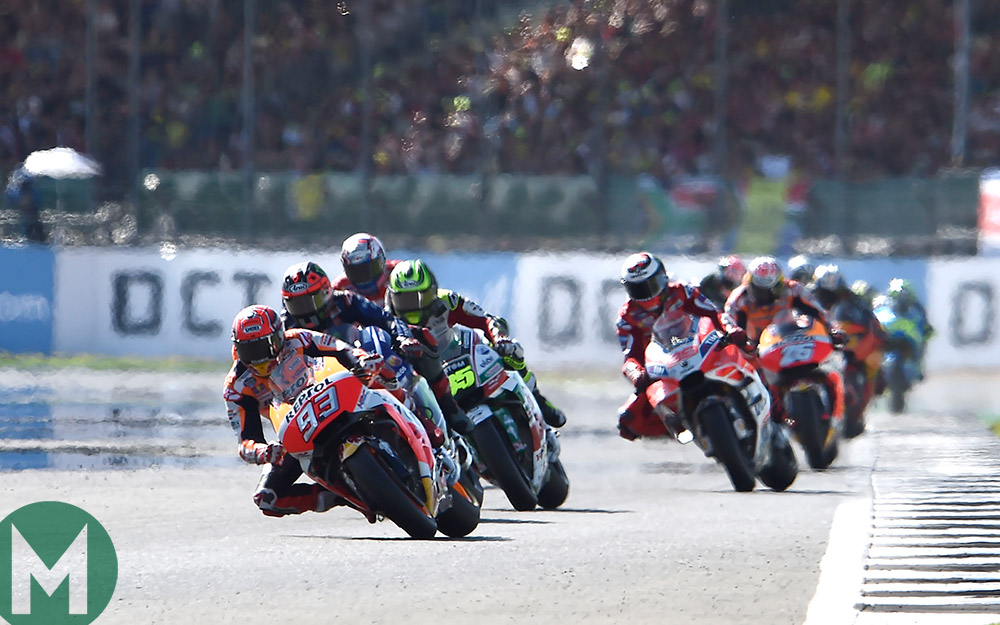 The British Grand Prix is always a race that riders are looking forward to because it’s very prestigious to win. Certainly everyone here in the UK looks forward to it and it’s one that I feel very fortunate to have won before at Silverstone.

For the British riders like Cal Crutchlow and Scott Redding, it’s of course the one race that you definitely want to win in front of your home fans. The circuit is very challenging, especially in its new configuration. The different sections are all over the place in terms of speed: you have the fast esses with blind entrances where it’s all about carrying momentum and you have the tighter sections of the track that lead on to straightaways where you have to be patient. You have to make sure you have good exit speeds and the circuit is also very wide.

It’s a technical circuit for the riders and its very demanding on the bikes, so getting the bike set up is very important to ensure you have the perfect combination of handling, traction and being able to manage the tyre over the length of the race. That’s especially true if it’s like normal at the British Grand Prix, as you normally have such a wide variety of weather conditions. But this past weekend the weather was pretty good, considering it’s the British Grand Prix!

Going into the weekend, everyone wanted to see if Marc Márquez could maintain his points lead and continue his march towards another world championship, or if Dovi on the Ducati could continue his momentum after that last race and last win. It looked like Marc was certainly going to be there and Cal Crutchlow, who qualified on the pole last year and finished second, looked like he was going to figure in the mix and on Friday he was very strong.

Márquez bounces back from crash

Marc Márquez looked like he was going to be the one until he had that crash. He crashed in one of the ess sections going into the left and you could see from the onboard that he was just carrying speed into there, maintaining throttle and as soon as he tilted in, it broke loose and high-sided him. I know what that feels like. He was on the harder compound tyre because on Sunday it looked like the temperature was going to be up and that was maybe the tyre he was going to have to run.

He had the crash, it didn’t hurt him and he ran back to the garage and got on the second bike, put on a softer compound Michelin and went out again. It didn’t take him any time to get back up to speed; in fact, on his third lap he put in the quickest time of the race weekend so far.

What he did after that was something that I think was very important. He still needed to see where the hard compound tyre was in terms of performance, so he put the same tyre that he had crashed with onto the number two bike and went back out. If you look at his times, he took a little time to get back up to speed, but after four or five laps he was running as quick as he had run all session and he was fine. He was very fortunate, but if you look at Marc over the years, he’s had quite a few crashes and normally doesn’t get hurt. It always seems to work in his favour.

Was Yamaha running its 2018 chassis?

Valentino Rossi was another rider in practice who was just building up as he normally does, getting up to speed and neither he nor his team-mate Maverick Viñales seemed to have any problems with the Yamaha. They went to Misano and tested in very hot conditions, the goal being two things. One, to see if they could get their bike working better in hot conditions from a tyre management standpoint for the latter stages of the race, because that’s where they seem to struggle, even with electronics. The electronics achieves the performance they need, but it doesn’t seem to be enough to help tyre wear later in the race.

The other thing was a bit of speculation. There were rumours that Maverick had been talking to Cal Crutchlow about testing the 2018 chassis and it seemed to be working better. There was some speculation that they might be running it this weekend and brought it out a bit early.

Going into the race, there were two things to look out for: where Dovi was and to see whether the Yamahas could step it up, as Maverick has slowly lost ground to Marc in the championship and I wanted to see if Valentino could turn his performance around and step it up just a little to get back into contention for the championship.

Race day came and the weather was beautiful. At the start of the race Valentino Rossi got out in front and it looked like he had it pretty much under control after eight or nine laps. He didn’t put a wheel wrong at any point and he was on the march for another victory. Of course the crowd would have loved it and that would have put Valentino right back into the championship. You could see that Dovi was right there, Maverick was there and Marc of course was there – until his engine blew with about five laps to go.

That’s something you just don’t normally see in today’s Grand Prix racing, but he blew an engine and it took him out of it. That put Dovi into second position and Valentino was leading it, but when that engine blew it seemed to cause a little bit of disturbance with Maverick Viñales who dropped back just a little bit. The interesting thing about Maverick’s tyre choice was that while everyone else was on the harder compound tyres, Maverick was on the soft compound. It looked like when that happened with Marc’s engine, it disrupted his rhythm a little bit and it gave Dovi and Valentino a little bit of a gap that Maverick had to chase down. Dovi made the pass on Valentino with two laps to go and then Maverick did the same.

The race was pretty much settled then. Dovi had another victory – that’s his fourth of the championship – but Maverick had a very strong second place and made a good tyre choice that he was able to manage. That’s a good indicator of where they’ve maybe made some improvements with the electronics and maybe in the chassis too for the rest of the championship.

Valentino showed he was right there. He didn’t have anything for the guys once they’d made the pass, but he showed that he’s going to be competitive and he’ll maybe have a chance to win a race or two as the season goes on.

It was a great performance from Cal Crutchlow, he finished behind Valentino Rossi and it was a good strong performance, but Dovi is the rider I want to end this on.

What’s very impressive is that there were seven years between his first win and his second win and then there were seven months before the next. This year alone he’s had four. It’s not just the fact he’s winning races but the way he’s going about it. He’s not the fastest rider out there, except when he needs to be. He’s got great race management, great wisdom in the choices he’s making and he’s showing the Ducati can work on many different race tracks.

I think there’s a lot of reasons why his performance is up. With Jorge Lorenzo coming into the team, I think this has taken some of the pressure off of Dovi. He wouldn’t have expected to be the quickest guy but he’s utilising all the experience that he has with the development of the Ducati and as we talked about before, his mind set has improved. You can’t emphasise that enough. His outlook on life has changed and it’s not only probably benefitting his own life, but it’s certainly showing benefits on the race track.