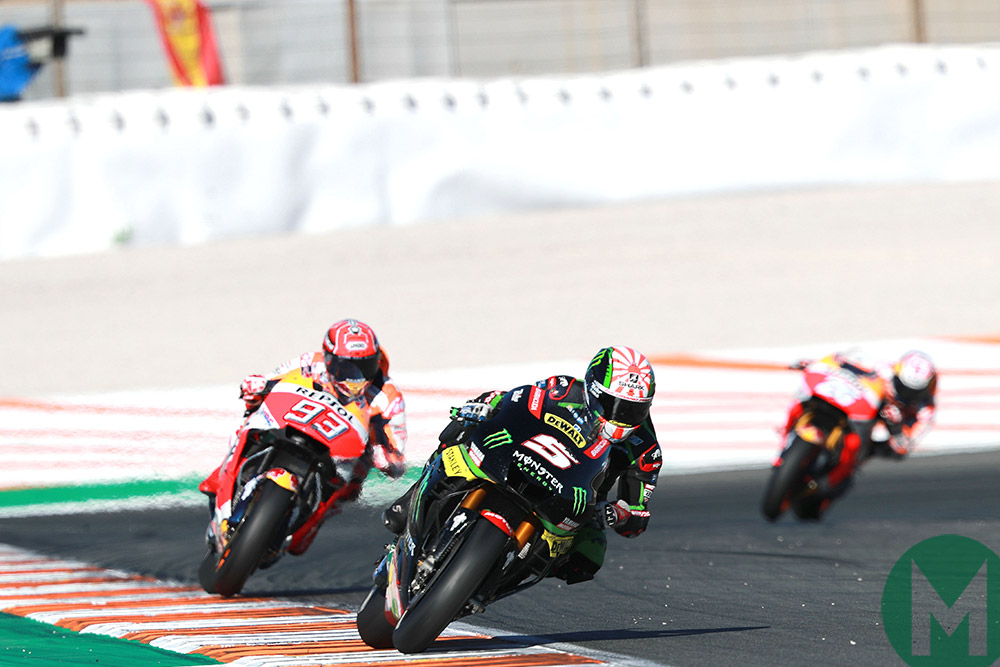 First off, I want to say what a pleasure has been doing these podcasts this year. It’s my first year doing it with Motor Sport and it’s truly been a pleasure and I really appreciate the support that I’ve gotten from all of you out there.

I hope you’ve really enjoyed it and my goal has always been not to talk at you, or to just throw out statistics or anything, but to give you a little bit of insight into what the riders would be thinking and maybe, in any given situation, a little bit of perspective from my point of view.

But, more importantly, it may have helped you see it a little bit differently. You know, one of the things I’m most proud of about Grand Prix racing is that we don’t just get out there – it’s not just about how fast you can go, it takes a lot more than that, especially at the top level.

When I talk to younger riders, or even the average rider when I was doing my school, which I loved (I’ve talked about how teaching and helping others is my favourite thing), I would always try to give them a little bit of insight, or thinking – it’s the mindset and we talked about that a little this year.

We talked about how mentality is such an important part of the approach. It makes a really good Grand Prix motorcycle racer, there’s so much going on. The ability to anticipate what’s going to come next, the ability to be consistent have a strong enough mindset to be able to adapt to any given situation is what makes the difference and ultimately shows at the end of the season where you get your best rider; your world champion.

So, it’s been an exciting year. Now, this year was a little bit different than last year, when we had nine new winners in MotoGP. I believe we set a record nine winners over the 18 races, and that was certainly something that was very special, and it showed that Dorna had done a very good job in making the bikes a little bit easier to ride. Michelin came in after Bridgestone dropped out, the single ECU and electronics certainly helped out, too. We didn’t have one team stronger than the other in that regard, it was the same for everybody, and certainly, with Dorna trying to improve the equipment available for the other teams – the non-factory teams – it certainly made the racing closer and more exciting in many respects.

The racing should become more exciting in the future with Dorna stepping in and providing money to privateer teams, or the semi-supported teams to help them lease stronger equipment across the board. That is certainly going to be good for Grand Prix racing and it should help make the racing more exciting, even for the non-factory riders.

So what I want to do in this year in review is talk about the top 10 in the championship, and give a little bit of my opinion on their strengths, what they could work on, and what we could see from them next year.

He was the rookie with Johann Zarco and the Tech 3 team this year. He was certainly a little bit different to his team-mate, who had two world titles, and you would expect that Johann was going to be the stronger of the two, to be honest. Right away he proved that he could ride a MotoGP bike and seemed to adapt pretty well. On the strength of his riding at the German Grand Prix at Sachsenring, he had a chance all the way up to the end. He only finished a couple of seconds behind Marc Márquez, who came through when he needed to, but Jonas did as well as he could’ve.

It seemed like right after the break, the Epstein-Barr virus zapped all his energy. He said he’d had it before, but it seemed to pop back up and I believe stress certainly has something to do with it.

There are a lot of factors, but the main thing is that they at least know what it is it is – something that can get fixed. He wasn’t able to ride, and he showed up in Japan but wasn’t able to get out of bed for two days. So the team sent him back, he had the test and, hopefully, he’ll run and he’ll come back even stronger next year.

As a rookie, he did a good job and usually what shows up in that first year, and the most difficult thing for rookies is consistency. You’ll see that with a couple of other riders on this list but next year if he comes back strong I expect that he’s going to do pretty well.

He seems to have the ability, and now we have to see if he has everything else it takes to be a Grand Prix winner.

Cal really didn’t have a successful season compared to last year, when he had his two wins. He reminds me of another racer I respected a lot, who was around Grand Prix racing for a long time, Alex Barros. The reason why is that he’s workmanlike in his performance.

Alex was on the fringes with Camel-Pons, Honda’s 500-supported team, and then on MotoGP bikes when they got that. So I know he did a lot of testing with them, with Yamaha and then he did get a factory ride on the HRC team for a season, and then he won the Suzuka eight hours and he won a couple of Grands Prix, so I kind of feel like Cal’s in that same boat.

He’s obviously a talented rider but it’s his effort and the fact he just works really hard to get the most out of his ability and to get the job done, and, sometimes it’s easy to forget that Cal has been successful and been on the podium with three different brands of bike: Ducati, Yamaha and of course he’s won races on the Honda, so he’s obviously a very versatile rider.

What’s it going to take for him to be a more consistent winner? He has said the difference between what he’s able to do on the Honda and what Marc is able to do, he’s very honest about that, and that’s one thing you’ve got to like about Cal. He’ll say exactly what he thinks, and, in this case, it’s that Marc is able to ride around some of the problems. Maybe if they get the bike a little more under control and a little tamer he can get back on the rostrum, but we’ll have to see going into next year.

Danilo actually had a good performance at San Marino and looked like he was going to win that race. He showed this year he can ride and certainly, in iffy conditions.

I think the Ducati that he was around, the GP 16, was a very good motorcycle and he certainly showed it well but his consistency… he struggled with grip issues and some of the races toward the end of the season and in dry conditions and even in wet conditions in one of the races, I believe Malaysia, where he struggled a little bit. But he certainly has the ability to be able to get the job done and if it’s a track like Misano he seems to be pretty scrappy and that helps him – he doesn’t mind getting in there and getting the job done.

So he’s certainly shown he can he can perform and we have to see what happens after that.

Going into this year we thought he would probably be the top Ducati, but it doesn’t surprise me either because Jorge showed in years past that when he’s not comfortable with the bike, and when there are some issues, he struggles. I know he’s extremely intense off the racetrack in terms of preparation, concern and effort, and he’s emotional. You see that sensitivity in his riding. It’s one reason he’s very smooth and he’s able to get out front, and he certainly is a great leader, as he showed many times this year.

He just wasn’t able to maintain the pace. Part of that is that he often ran the softer tyre and the group would go away. He likes to carry a lot of corner speed right on the edge of the tyre. If they can get the bike turning better mid-corner, I think Jorge would be right there – he’s a five-time world champion, he can get the job done. It’ll be interesting to see what happens in winter testing once they get the 2018 bike and if it is better.

Just like with his team-mate Folger, though, it was consistency that was the problem and that is to be expected. It’s very unusual for a rider to come in and to be consistently at the top with no MotoGP experience or 500cc Grand Prix bike experience.

Week in and week out you just get used to that level of pressure and expectation but when he did do well he put in some great performances and he had a couple of chances to sniff out a victory.

It’s certainly going to take a little more consistency, and everybody expects that from him. It’ll be interesting to see if Yamaha steps up and gives him a 2018 bike for next season instead of the 2017 bike.

In testing at Valencia, he seemed to like it but that was a little bit different to the higher speed circuits where, especially, riders like Valentino struggled, so we’ll have to wait and see.