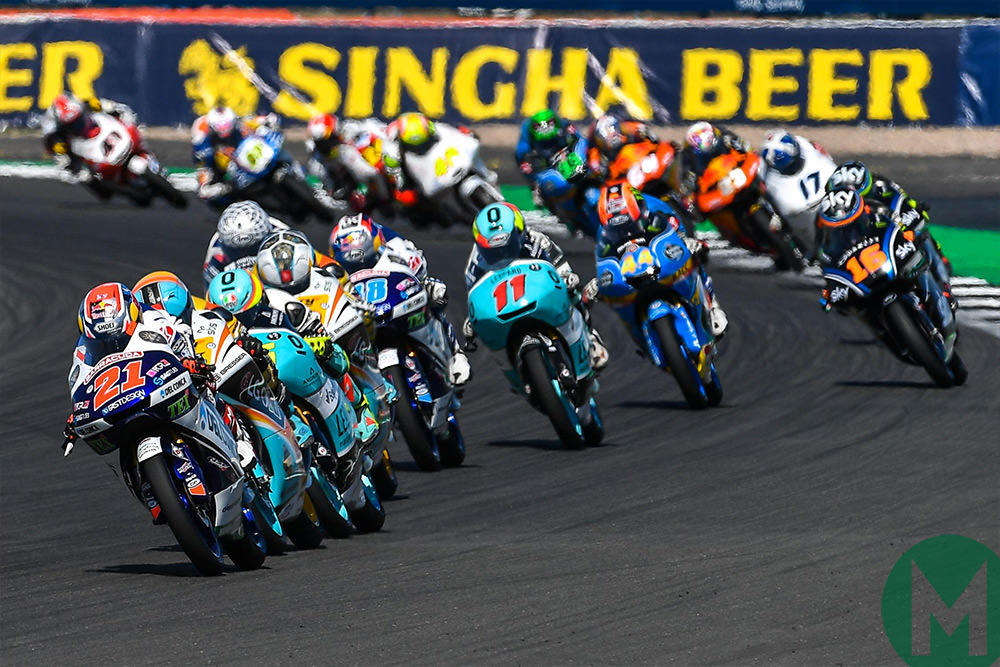 If MotoGP was a high school, Moto3 would be the class of misbehaving young bad boys and girls that sends its teachers home each evening sobbing into their hankies.

There is no naughtier class in MotoGP than Moto3. The smallest category causes head teacher more of a headache than the other two classes combined. That’s right, Race Direction spends more time policing Moto3 than it does MotoGP and Moto2.

Saturday is always the worst day of school for Moto3: it’s qualifying and the kids are not all right. Despite repeated warnings and punishments from head teacher, Moto3 riders continue to misbehave during qualifying.

Mostly, they ride too slowly in their efforts to go faster. This entails slowing down and looking over your shoulder, waiting for a fast rider on a fast lap, from whom you can gain the all-important draft, which means using him or her to cleave the air in two for you.

Some riders in Moto3 get their heads down and try to go fast alone during qualifying, but most believe that they’ll gain a vital hundredth or two with a slipstream.

And herein lies the problem. Moto3 provides the most thrilling racing of the day at most rounds of the championship. In fact, thrilling might not be the correct word. How about terrifying? I know I’m usually terrified when I’m watching half a dozen riders braking side by side and then pitching into a corner at 90mph, waiting for the inevitable. When the pile-up doesn’t happen I can’t help but rejoice in the miracle of the human brain and body that allows six riders to get through a corner with half a centimetre between each of them.

The reason the racing is so close (and Moto3 is the closest-fought class in seven decades of Grand Prix racing) is because the technical rules have been written to ensure parity between machinery. The regulations are so tight that it’s very difficult for one team to gain an advantage over another.

This is great for entertainment value – if that’s what you call getting scared out of your wits on a Sunday morning – but it also makes life very difficult for riders. The reason they misbehave, especially in qualifying, is because the technical rules make every hundredth of a second so valuable.

Race Direction reads the riot act to Moto3 riders on a regular basis and has imposed various new rules in an attempt to improve on-track behaviour. Most importantly, there’s a rule designed to prevent riders from slowing for a tow, by punishing anyone whose sector time exceed their best time in that sector by more than 110 per cent.

What’s wrong with slowing for a tow? The most dangerous aspect of racing is speed differential. When everyone is going roughly the same speed (or exactly the same speed, as above), racing isn’t that dangerous. But when you have a rider doing 70mph, waiting for a tow, and a bunch of riders coming along at 110mph, that’s when really, really bad things can happen.

Moto3 riders who break the 110 per cent limit are usually sent back a couple of rows on the grid, but many still break the rules and are often encouraged to do so by their team managers. So what to do?

Firstly, it might be worth splitting Moto3’s qualifying session into two 15-minute sessions, with riders randomly allocated to each session, so that FP3 doesn’t turn into another qualifying session. That way you immediately half the number of riders on track together. Then perhaps there might be some way of controlling pit exits, so riders can’t time their entrance to the track to put them right behind a rider who’s on a fast run.

BSB Series Director Stuart Higgs has another way of dragging racers – who are surely some of the unruliest people on this earth! – into behaving themselves. He shows them video clips of two horrific accidents, both caused by the deadly mixture of speed differentials and faster riders not seeing slower riders until it’s too late.

Firstly, the accident during the 1983 British GP that claimed the lives of Norman Brown and Peter Huber. Brown was cruising back to the pits with mechanical problems, when Huber and another rider arrived at full speed. Huber was right behind the other (unnamed rider), who swerved at the last minute to avoid Brown, so Huber had no time to react. Both him and Brown were killed instantly.

Secondly, the accident that happened during the 1990 250 Yugoslav GP, when the leading group of riders caught a backmarker cruising back to the pits with bike problems. Most of the group managed to avoid the slowcoach, but Reinhold Roth didn’t see him until too late. Roth was seriously injured in the ensuing collision and has never fully recovered. He is still hemiplegic.

This is the kind of accident that could happen in Moto3 when some riders are going slowly and others are going fast. This is why it’s so important that Moto3 riders are persuaded to behave themselves. This is also why riders who cruise back to the pits should be severely sanctioned.

There is another area where riders across all three classes are being brought to heel: the policing of track limits.

In the old days, riders didn’t routinely exceed track limits because GP tracks were bordered by buildings and walls, then by steel barriers, then by gravel traps. The consequences of running wide weren’t good. The relatively recent introduction of asphalt run-off was controversial, but mostly it improved safety. However, solving one problem usually causes another; in this case, riders getting too greedy with the asphalt to improve their lap times. Initially, this new problem was solved by laying Astroturf at trackside, but Astroturf caused a lot of crashes, so eventually it was removed.

Now MotoGP’s Race Direction has five staff whose sole job is to police track limits, via camera. Dorna now has cameras dedicated to recording riders exceeding track limits and has recently started developing image recognition software that automatically spots any rider that goes too far. This software spots culprits in Moto3, Moto2 and MotoGP a bit like the CIA spots Jason Bourne in the Bourne movies, by tying in with other cameras and timekeeping data.

That’s how it works in MotoGP. Every change to improve safety of the racing usually throws up new problems, which must be solved by new solutions and new technology.

I wonder what’s next.