Valentino Rossi told us at Silverstone he doesn’t have the late-race speed to win the title, but recent bike improvements suggest otherwise 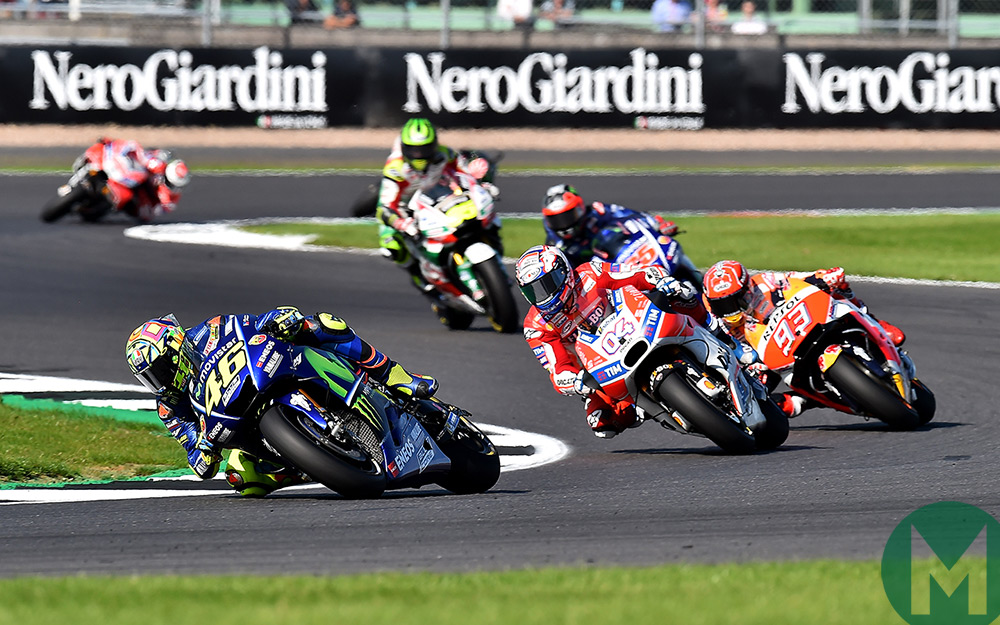 As we all know, on Sunday afternoon Valentino Rossi became the first motorcycle racer to contest 300 Grands Prix in the premier class; a statistic that makes your head swirl. If he had started his debut 500cc race in March 2000 from his hometown of Tavullia and kept racing westward on the same latitude he would already have completed a full circumnavigation of the earth and be well into his second lap at full-race speed, heading past Montréal, Canada, at around 220 miles an hour.

At Silverstone the 38-year-old led all but three laps of his 22nd British Grand Prix (including the only one that matters) to finish less than a second behind winner Andrea Dovizioso and place himself within 26 points of the championship lead.

So here’s the big question: can Rossi be world champion at the end of his 306th premier-class race?

This is probably the closest battle for the kings of crowns in 69 years of world-championship motorcycle racing. Dovizioso, Marc Márquez, Maverick Viñales and Rossi are within 26 points of each other with six races remaining, so everything is to play for.

So far each of the three leading factories – Ducati, Honda and Yamaha – has won the same number of races, four each, although Honda and especially Ducati have been stronger in recent weeks. Could that be about to change? Championship battles usually swing this way or that for two reasons: rider injuries or machine adjustment.

On Sunday Dovizioso scored his fourth victory from the last seven races, but the biggest improver at Silverstone was Yamaha. Rossi led 17 laps and Viñales crossed the finish line 0.115 seconds off the win. Incredibly, this was Movistar Yamaha’s first podium double since Argentina.

The reason? The factory’s post-Austrian GP tests at Misano, where they worked on the problem that has haunted them for a year and a half: excessive rear-tyre degradation.

After Sunday’s race Rossi announced, “I will give my maximum but I’m not strong enough at the end of races to try for the championship.”

I could be wrong, but that sounded like classic VR mind-games: misleading people into taking his challenge less seriously, because only a fool tells his rivals to beware. Whatever Rossi’s official line, there’s no doubt that the veteran and his young team-mate made an important step forward at Misano, which is why the team enjoyed by far its strongest race in more than four months. 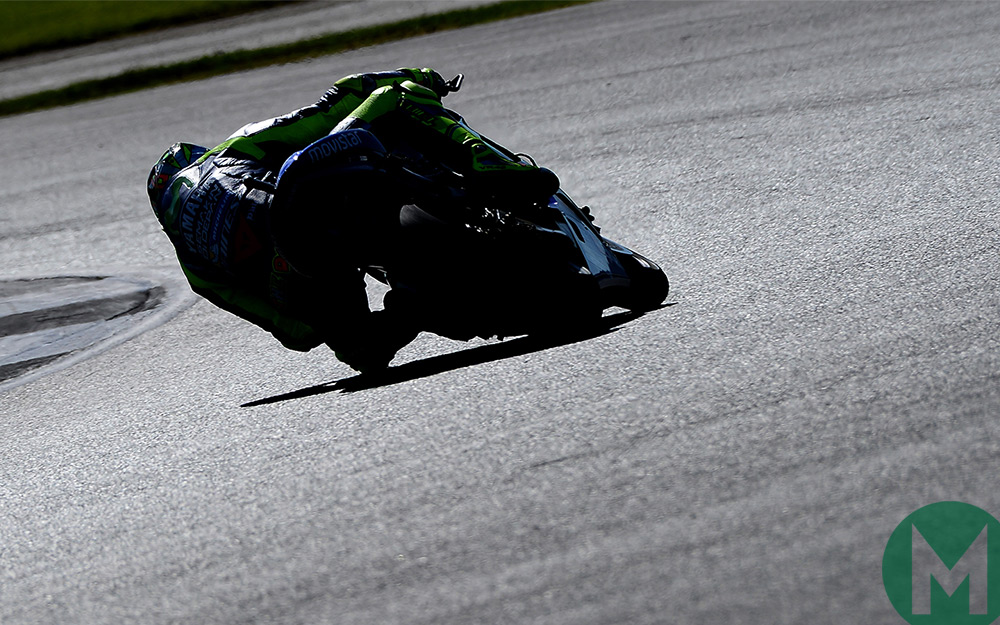 Most talk of Movistar’s recent problems has centred around the M1’s latest frames: the 2017 and the 2017.2, introduced shortly before this campaign reached half-distance. Even last year the YZR-M1 over-stressed its rear tyre, reducing acceleration grip in the crucial final stages of a race. Both this year’s frames were designed to solve the problem, but neither did so, although the 2017.2 did give Rossi the corner-entry confidence he had lost with the 2017.

Of course, chassis design has a huge effect on how a motorcycle works, including how it grips the asphalt accelerating out of a corner. This vital performance factor is affected by all aspects of chassis design: bike balance, engine position, centre of mass, swingarm pivot point, chain pull, frame stiffness, swingarm stiffness, suspension set-up and so on. Yamaha had all this spot-on during the Bridgestone era, when the factory won four titles in seven years, but its engineers are still struggling to duplicate that much-envied machine balance with the Michelins.

Although there were Sunday-evening rumours that both Movistar men raced a prototype 2018 chassis, Rossi’s crew chief Silvano Galbusera let nothing slip. Galbusera is one of MotoGP’s straightest-talking engineers, or maybe he’s a very good actor. Who knows?

Anyway, Galbusera insisted that the team’s first double podium in ages was due to improvements in traction-control set-up, not chassis set-up. This is no surprise, because engineers fiddle with electronics more than anything else these days.

Ducati team manager Davide Tardozzi told me at Silverstone that analysing data and adapting the electronics accordingly is the biggest job for a modern-day MotoGP crew chief. KTM Moto3 crew chief Matthew Casey added, “analysing data is a bit like a truck dumping a load of sand in front of the pit, then you try to find the grain of sand that will make the difference.”

That’s why this job takes time, even for a factory team. Rossi, Galbusera, data engineer Matteo Flamigni and dozens of Yamaha electronics boffins have worked for months to improve drive traction, which means that moment when the rider eases open the throttle on the edge of the tyre and then starts driving out the corner, using a bit of wheelspin to tighten his line and allow more room for acceleration. The aim is to prevent tyre temperature from rising too far, without reducing torque delivery too much. Like everything else in racing, it’s a tricky balancing act, especially with MotoGP’s less sophisticated control software introduced last year.

At Silverstone, Rossi’s rear tyre worked perfectly for the first 15 laps, less so for the last five, when his lap times dropped by half a second. Compare that to the previous race at the Red Bull Ring where his pace slowed by more than a second.

“We did change chassis balance a bit at Misano,” says Galbusera. “But this year we can’t make the best chassis settings for the best pace, because we need the best chassis settings to save the tyre, so Valentino can’t go very fast from the beginning to the end. So we work to reduce wheelspin through the electronics, to stop the rear tyre from overheating and to keep it gripping. At Silverstone the tyre was a bit more consistent, so the race confirmed that we made a good step at Misano. Now we need to see if this same step works at other tracks and we need to keep making more steps in the same direction to retain the tyre’s performance for longer.”

Next week MotoGP goes to Misano, so Rossi and Galbusera should start from a good basis; but so will everyone else that matters, because Ducati and Repsol Honda also tested there.

However, there’s no doubt that Rossi is in the best shape he’s been in for months. Until Silverstone he hadn’t even been on the podium since his Assen win (on a damp track) so his title hopes seemed over. Now he is back in the game. There are 150 points up for grabs at the last six races, so a 26-point deficit isn’t an impossible mountain to climb.

My own feeling (wild guess, if you prefer) is that Dovizioso or Márquez will lift the crown; after all, remember that three of the last six race tracks go left, which is the way Márquez likes to go. Viñales, of course, benefits from the same improvements that have boosted Rossi, but although the youngster has more outright speed, Rossi’s mastery of circumstances may count for more at this stage of the championship.

Much will depend on the Michelins and how they work for each rider and each bike at each racetrack. If the tyres, tracks and temperatures go his way, Rossi could still pull this off.