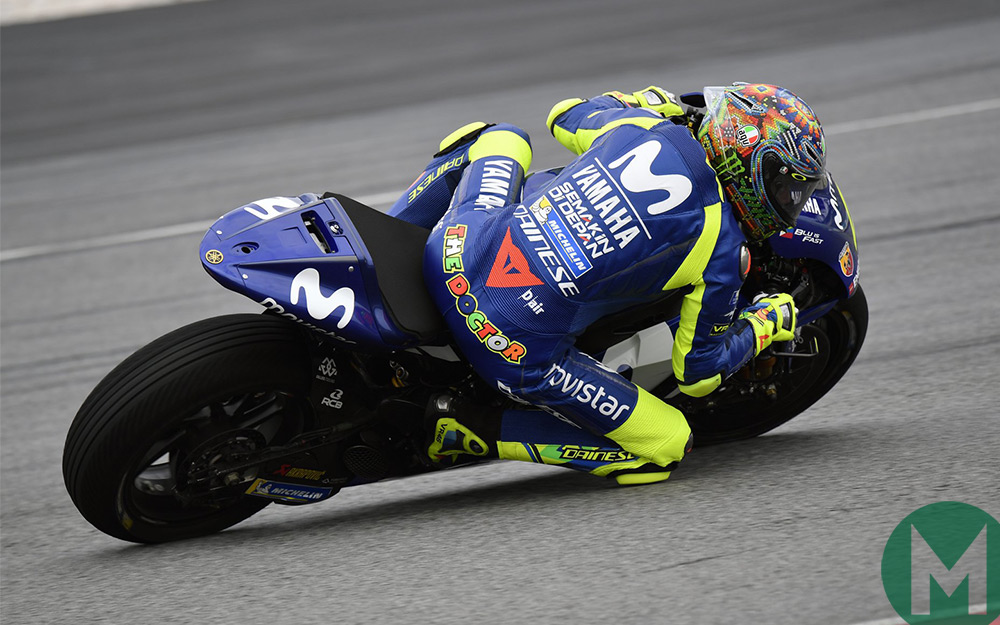 “It’s only the first day, so it’s nothing,” said Valentino Rossi, on the first day of his 23rd season of Grand Prix racing.

True, lap times from the first of three days of testing here at Sepang – topped by Repsol Honda’s Dani Pedrosa – don’t necessarily mean anything when it comes to predicting what will happen during the 2018 MotoGP world championship. But in fact today wasn’t nothing at all, for the MotoGP championship as a whole, because something very big happened during Rossi’s media debrief.

The nine-time world champion had been hanging around at the top of the times throughout the afternoon, suggesting that he wasn’t in the same hellhole in which he found himself this time last year.

He didn’t even need to speak to tell us what he felt. He looked happy, upbeat, but more than anything relieved, confident that the worst season of his MotoGP career (apart from those two years at Ducati) is well and truly behind him. And you know what that means.

“I have the motivation, I want to try to continue,” he said.

So, will Rossi sign a new contract with Yamaha? “First, I want to do all the preseason tests, because I want to understand if I’m competitive, if the bike is competitive and also if I have enough power to do all the tests, then I will sign.”

So there you have it, Rossi looks 99.9 per cent certain to continue into 2019, when he will be 40 years old. What’s that sound? It’s the sound of champagne corks popping inside Dorna HQ.

Rossi’s problems last year were due to mistakes made by Yamaha, mostly in chassis design, but also in electronics set-up. The factory has learned its lesson and created a chassis that owes much to the 2016 design, which Rossi loved.

“I can ride the bike more naturally,” he said. “I can feel the front better and when I push hard, the lap times come.”

Rossi ended the day sixth fastest, about nine tenths down on Pedrosa, but that didn’t worry him, because he stopped early, when many other riders were putting in their fastest laps.

“The first day of testing is always a disaster, physically, so I wanted to save my energy for the next two days,” he said.

Pedrosa was impressive, half a second quicker than the fastest lap during last year’s Malaysian GP weekend and three tenths better than closest challenger Andrea Dovizioso, who led a whole posse of Ducatis: Jorge Lorenzo, Danilo Petrucci and Jack Miller. Reigning champion Marc Márquez ended the day just behind Rossi and just ahead of Johann Zarco.

Honda’s focus here is working on its engine, after two years struggling with a lack of peak power. “Our engine package is our focus during this test,” affirmed Pedrosa. “The new engine I tried has more power, but we still need to work on smoothness to help tyre life.”

Dovizioso ran back-to-back tests with a GP17 and GP18 chassis, immediately finding an important positive with the latest unit. “It’s better on the last part of corner entry,” he said. “I can enter corners faster, so I’m very happy with that.”

Like Rossi, Zarco advised against making too much of today’s lap times. “The most difficult thing on the first day of testing is riding after two months without 300 kilometres an hour in your mind,” said the Frenchman, who was the first man out of pit lane this morning, when the track was still wet from a morning downpour.

Ironically, Zarco is riding the 2017 chassis that both Rossi and Viñales hated. And he’s loving it. “What I feel from my new bike is that it gives me the confidence I never had last season,” said the double Moto2 world champion and 2017’s top MotoGP rookie. Who knows what he can achieve now that he feels fully confident on a MotoGP bike?

Zarco spent the winter training on a slick-equipped supermotard bike, working on riding fast with consistent laps times. His other training breakthrough was getting his backside well and truly kicked in December. This punishment was administered in Barcelona, during the Superprestigio dirt-track event.

“The Superprestigio is a totally different category, which is good for your riding technique and also good training for your mind,” he explained. “You feel you are a good rider, but then so many riders beat you and you get nervous. The work is always to learn to stay calm…”

Finally, spare a thought for Petrucci, who has been sacked even before the season starts. The likeable former Superstock champion has already been told that his contract with the Pramac Ducati team won’t be renewed at the end of this season.

Petrucci wants to stay in MotoGP, so he’s working on two main issues to improve his competitiveness in the hope of landing a good ride for 2019. The Italian is MotoGP’s Rob McElnea of the moment, of whose team-mate Eddie Lawson once said, “he drafts like a truck”.

Petrucci has had an abstemious winter, shedding four kilos, but he’s still bigger than anyone else. Now he wants to improve his throttle control to save the rear tyre and thereby improve his pace at the end of races.

In the old days, riders used to up their pace towards the end of each season to improve their chances of getting a good deal for the following season. More than anyone, Petrucci is already riding for 2019.