This is the day. Forty years ago, during the afternoon of Sunday July 25, 1976, Barry Sheene rode over the finish line at Anderstorp, both hands aloft waving V-for-victory signs, to collect his first 500cc World Championship. 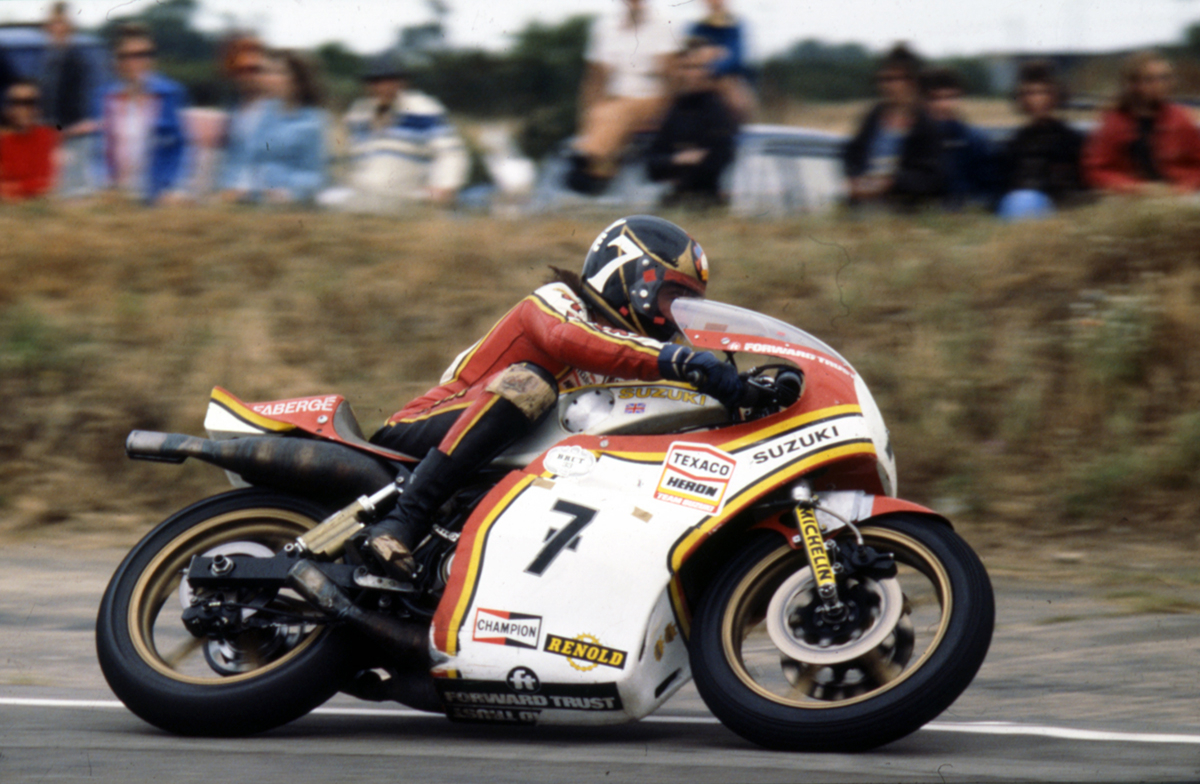 The Cockney whizz-kid had utterly dominated the 1976 season, winning five of the six races he contested and taking second place in the other. His final score of 87 points was 33 more than championship runner-up Tepi Lansivuori. In other words, it was a walkover.

But Sheene’s historic Anderstorp weekend very nearly turned out to be a total disaster. This was largely due to his factory Suzuki team in fact consisting of Sheene, dad Franko, mum Iris, girlfriend Stephanie McLean and mechanic Don Mackay, an electrician by trade.

Japanese engineers rarely appeared at races that year because Suzuki had shut down their factory 500 effort at the end of 1975. The company had been sucked dry by the development costs of their first four-stroke road bike, the GS750.

So Sheene’s 1976 crew was by no means slick and professional. In fact, parts of the team were dangerously incompetent. 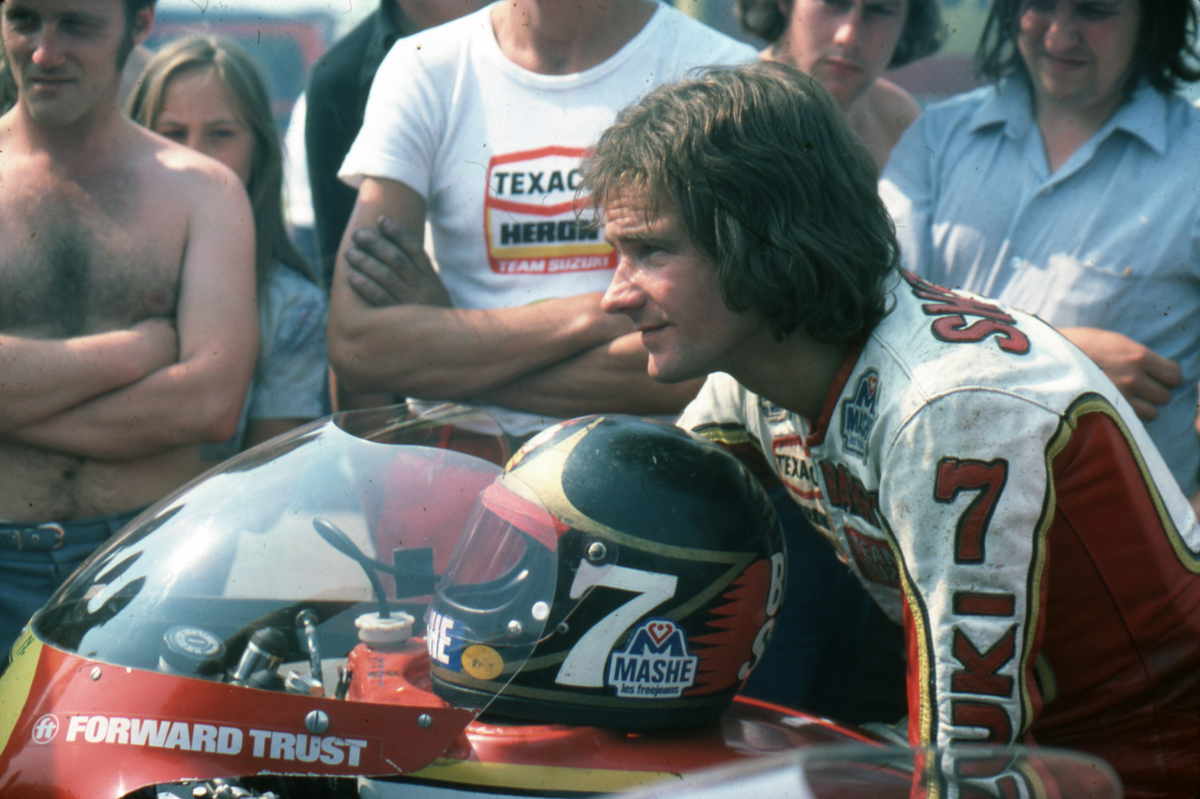 The trouble had started two weeks earlier during a Snetterton national meeting – always a good earner for Sheene – when he crashed heavily after his RG500’s brakes failed. He was lucky to hobble away from the high-speed accident, which left his number-one GP bike badly damaged.

The cause of the brake failure? Someone had forgotten to insert the brake pins, so when Sheene hit the brakes, the pads flew out of the calipers. Not good.

A complete rebuild was required, which was completed just before Sheene and his crew sailed across the North Sea to Sweden.

Sheene was desperate to win the title at Anderstorp so he could dodge the final three races of the season, all of them staged on the kind of lethal old-school circuits he hated: Imatra in Finland, Brno in Czechoslovakia and the Nürburgring in West Germany.

In theory Anderstorp should’ve been a cruise. But it was anything but.

“When we unloaded the bike in the paddock we noticed the wrong triple clamps were in my number-one machine,” wrote Sheene in his autobiography, Barry Sheene, The Story So Far. “And we had no record of the right pressures to use in the air forks and my number-two bike had been given the wrong gearbox. Michelin had also sent me the wrong tyres.”

The chaos didn’t diminish when practice started, in fact very much the opposite. His number-one bike repeatedly oiled its plugs, so he switched to his number-two bike, which blew its head gasket, so he reverted to his first machine, which oiled its plugs again.

“I was way down in 15th position after the first session,” he recalled. “Then we managed to discover that the choke cables were round the wrong side of the steering head, so all the chokes were pulled out, drowning the engine.” 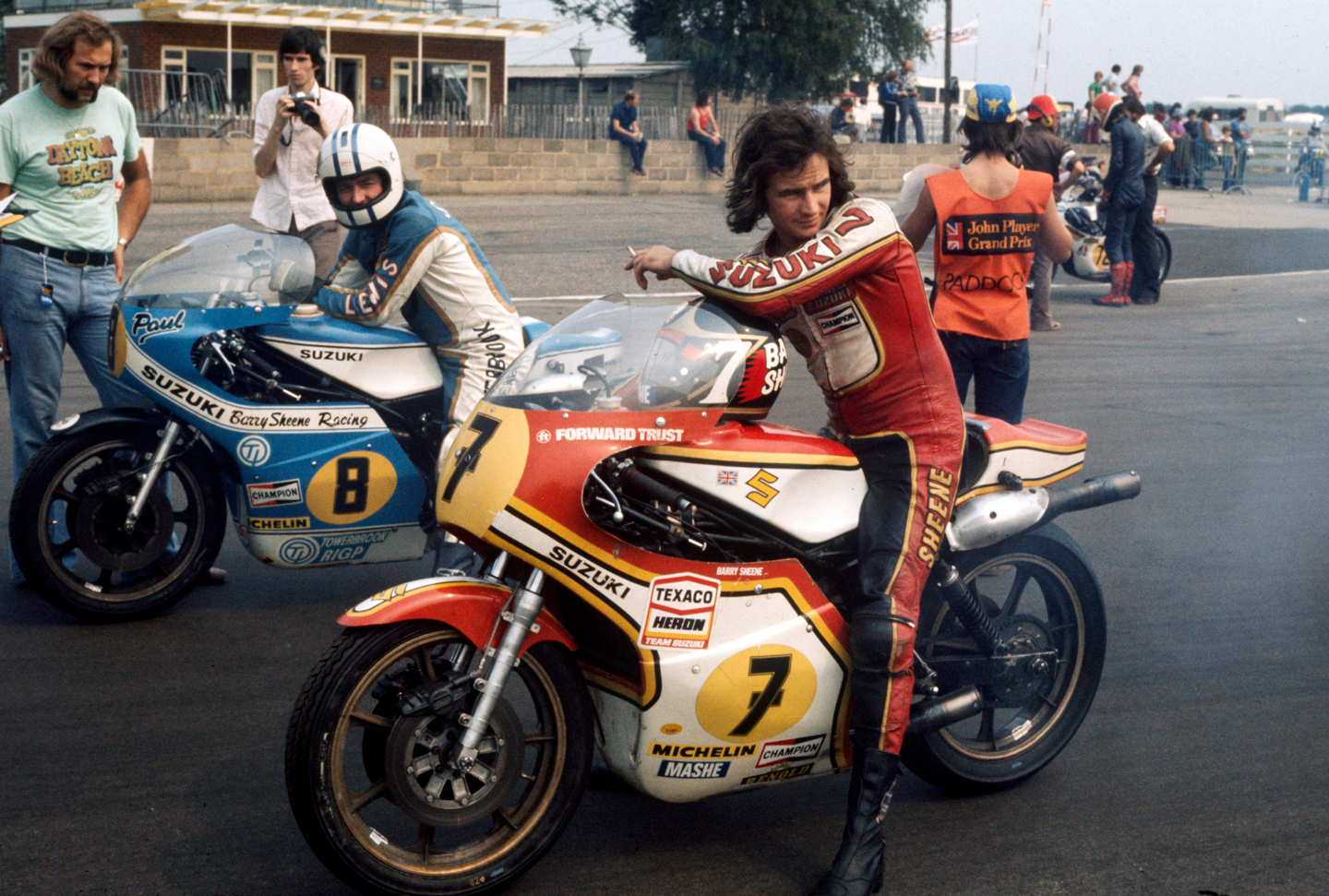 And then he spotted another mechanic cock-up. This time the brake pins had been fitted but one pad had been inserted back to front. This was a potentially fatal error, so it was no surprise that Sheene blew his top.

Sheene never publically blamed anyone for these serial and serious errors, but suspicion usually fell on his ageing father. However, he wouldn’t sack Franko because family was everything to him.

By Saturday his crew had put the worst behind them and Sheene was on the pace. He ended qualifying second-fastest behind pole-sitter Lansivuori and ahead of fellow front-row starters Pat Hennen, Marco Lucchinelli, Stu Avant and Victor Palomo. Six riders on the front row in those days; all of them stood next to their motorcycles, ready for the chaos of a push start.

The race went perfectly for Sheene. He had one of the easiest rides of the season, cruising home 34 seconds ahead of veteran privateer Jack Findlay, who was riding an over-the-counter version of Sheene’s RG500. Aussie Findlay had made his GP debut in 1958, riding a Norton Manx, when Sheene was just seven years old. Third was Chas Mortimer, son of famed Brooklands racer Charles Mortimer, and the only man to score World Championship victories in 125cc, 250cc, 350cc, 500cc and F750 races. 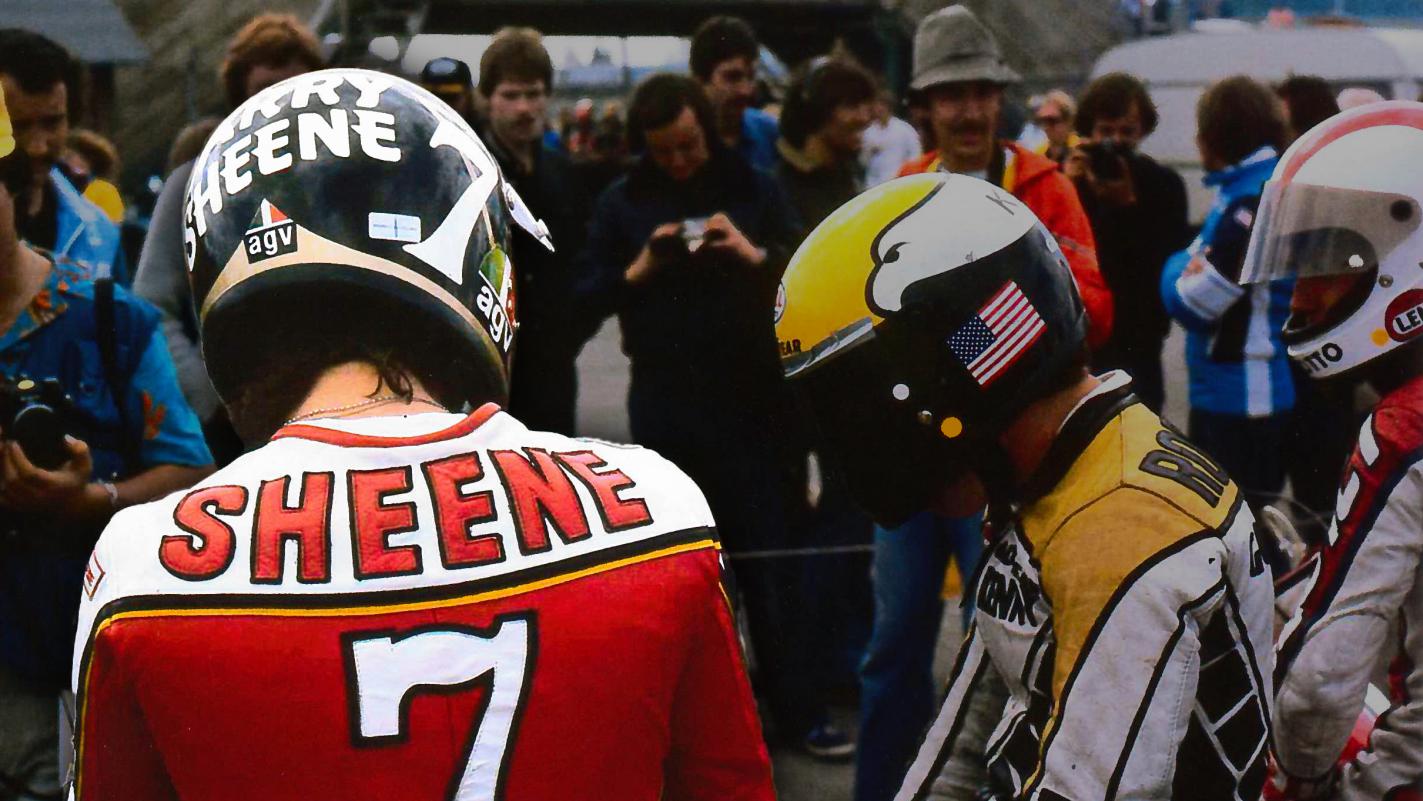 Sheene celebrated his coronation as you would expect bike racing’s first rock and roll world champion to celebrate. “We drank our way through 30 bottles of champagne – and at Swedish prices of £14 a bottle [around £95 in today’s money],” he wrote.

Sheene became a rich man on account of his racing talent and his star quality. He was very much the prototype Valentino Rossi, something Rossi recognised in his younger years. The Briton’s first championship-winning season earned him something like £110,000, which doesn’t sound a lot, but at the time would’ve bought more than 60 four-bedroom houses, which equates to around £10 million in today’s money.

He was also a standard-bearer for breaking down fusty upper-class barriers. He was well-known for always wearing jeans, especially when the occasion demanded something much more ‘respectable’. And he was famed for drilling a hole in the chin piece of his racing helmet, so he could enjoy a cheeky fag while awaiting his next race. Sadly, it was his cigarette addiction that killed him in 2003 at the age of 52.

Mat Oxley will be at this weekend’s Silverstone Classic event, signing copies of his book Stealing Speed on the Motor Sport magazine stand. Follow him on Twitter to keep up to date with timings 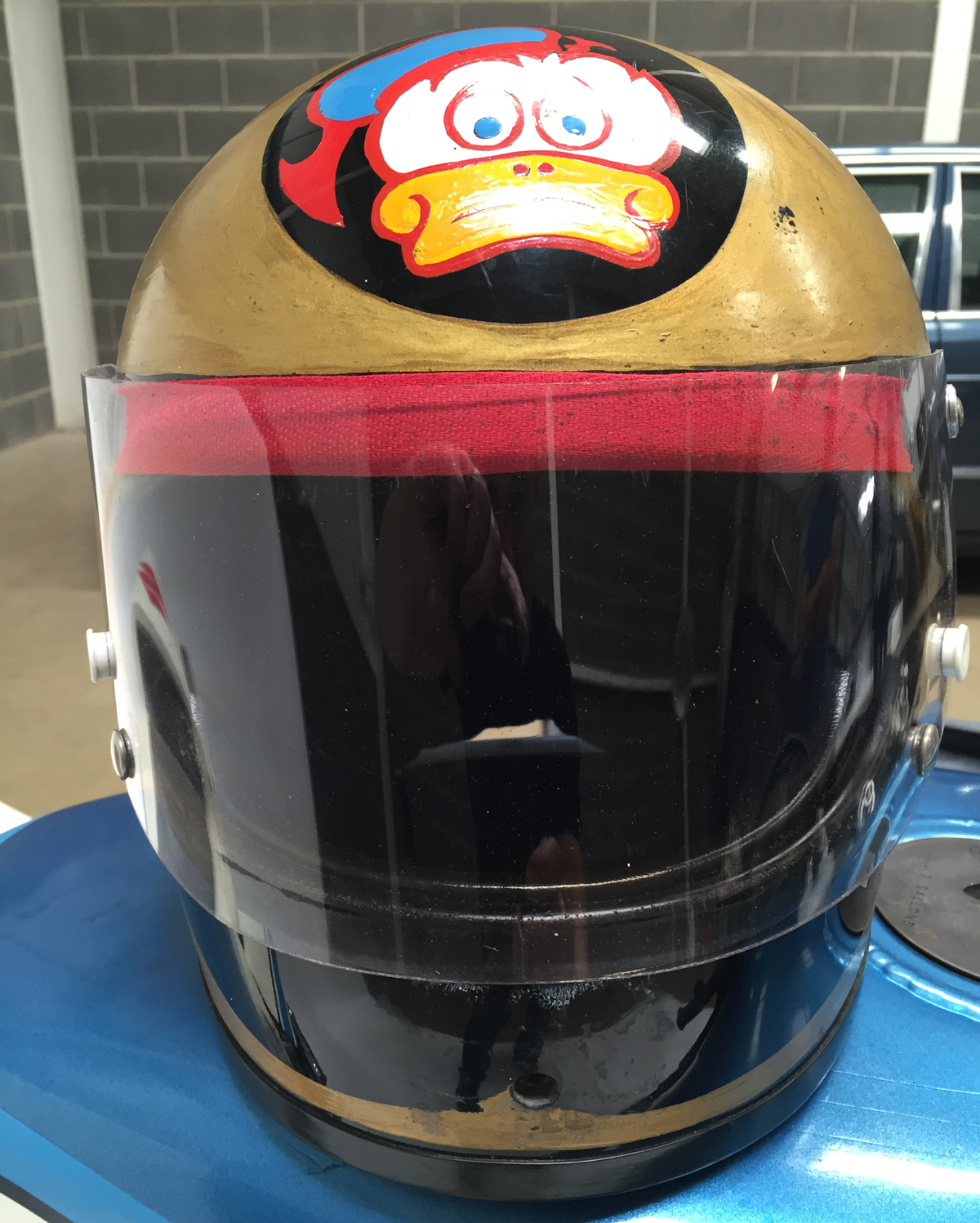