The dust has settled on Sunday’s frantic season finale at Valencia; so it’s time to decide: was Jorge Lorenzo right or wrong to refuse assistance to his team-mate? 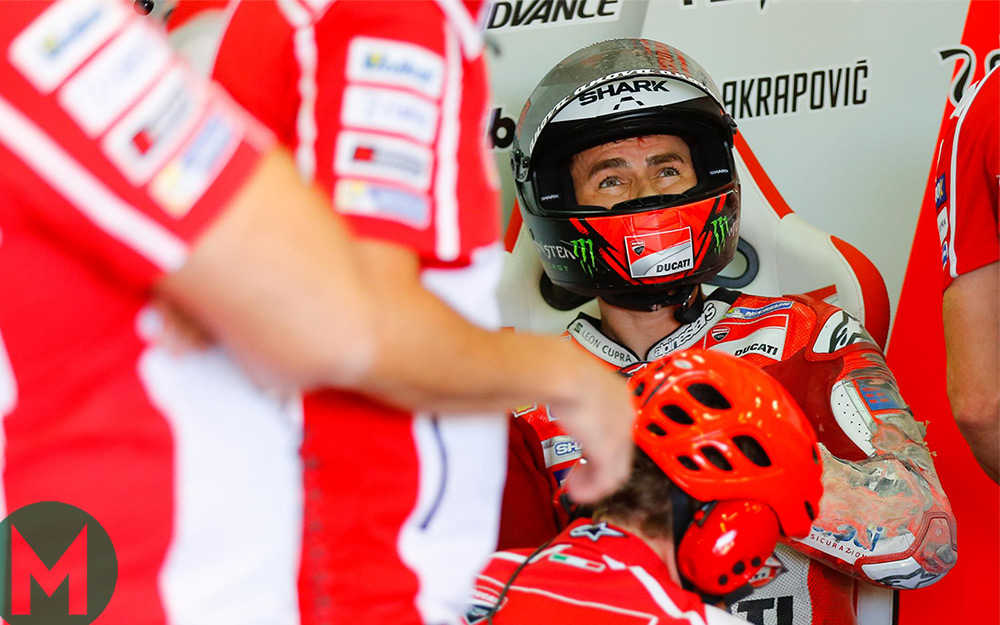 Team orders suck, right? Yes, they do. But team orders aren’t always what you think they are. If you are a professional racer and you race for a factory team in MotoGP you will have at least a hundred colleagues. You may be the star man, the best-paid employee, the worker who’s on the telly, the guy who gets chased by the ladies, but you go racing on the backs of everyone else. Without them, you are nothing. There is not a rider on the MotoGP grid who doesn’t know this.

On Sunday, Ducati had a chance to win the MotoGP world championship. A tiny chance, but a chance nonetheless. For several months Jorge Lorenzo had told us that he would happily help team-mate Andrea Dovizioso at the last two races. He made all the right noises and at Sepang last month he did indeed make way for Dovizioso. Everyone assumed he would do the same at Valencia.

But he didn’t. Lap after lap, he rode around behind Johann Zarco, Marc Márquez and Dani Pedrosa, with Dovizioso right behind him. The sense of dismay in the Ducati garage was palpable. Lorenzo knew exactly what was up, but he failed to do what any reasonable team-mate would do – team orders or not – move aside and let the world-title hopeful decide his own fate.

Most likely, Dovizioso wouldn’t have won the title anyway. He needed to both win the race and for Marquez or Honda to make a major mistake, so the odds were stacked firmly against him. He was relaxed all weekend, most likely because he knew his chances were tiny. But that’s not really the point. Lorenzo should have left it to Dovizioso, not because he should obey team orders but because he should respect team spirit.

For many years I’ve tried hard to like Jorge. It’s not my job to like or dislike riders, my job is to write about bike racing, but bike racers are humans, they’re not just names on a result sheet. I’ve known some sweet riders and some nasty riders, but if they’ve got riding talent they deserve respect as racers, if not as human beings. And in twisted way I enjoy the company of some of the dodgier types, because they are red in tooth and claw, which is much of what it takes to be a racer.

Obviously, Jorge couldn’t care less if I like him or not, or indeed if anyone else likes him, because he’s not a popstar, he’s a racer. His job is to win races, not to court record sales or TV ratings.

But I think he did the wrong thing on Sunday. It’s no big deal to swap fourth place for fifth, so why didn’t he? It would’ve saved him a lot of hassle from various journalists (especially the Italians) and it would’ve saved me from writing this blog.

His decision to ignore dash messages, pit signals and possibly his own sense of righteousness has caused quite a furore over the last few days. In reaction to the Italian media ‘casino’ (as they call it), Lorenzo and Ducati have tried to pour oil on troubled waters. Dovizioso too, because that’s the kind of guy he is. He knows that an argument within the team won’t help anyone, so he’s risen above it all and got on with his life.

Lorenzo explained his insistence on holding position thus: he was helping to pull Dovizioso towards the leading trio of Zarco, points leader Marquez and team-mate Pedrosa. He was faster than Dovizioso, he said, so his explanation made perfect sense. 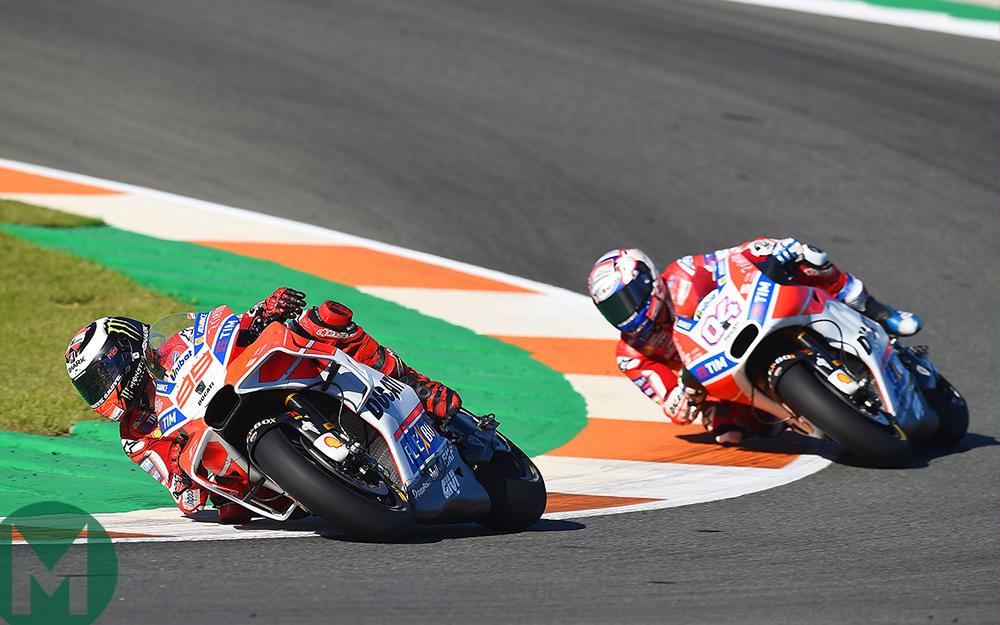 Also, Lorenzo never made consistent progress into Pedrosa’s advantage. On lap seven he was four-tenths of a second behind the Honda, by lap 11 that gap had grown to almost seven tenths, then to more than eight tenths and finally to more than a second by lap 17. Only when Pedrosa rode a few slightly slower laps did the gap close a bit. Lorenzo said he was faster than Dovizioso, but how did he know that when he was in front of him? Dovizioso was consistently two or three-tenths of a second behind his team-mate.

What effect did all this have on Dovizioso’s composure? The 31-year-old is about as calm and reasonable a bike racer as you’ll ever find, but he must have been getting agitated by his team-mate’s stubbornness, because he surely would’ve stood as good a chance of being towed along by Pedrosa as by Lorenzo.

If Dovizioso had moved into fourth behind Pedrosa, perhaps the dynamics of the race would have changed. Perhaps he would’ve found some extra inspiration, which can be a huge factor in motorcycle racing. Even then, something weird would’ve had to happen for the championship balance to shift, but something very weird very nearly did happen. So, it was worth a try. Surely, anything was worth a try, especially because Lorenzo had nothing to lose.

None of this has anything to do with actual team orders. It’s about working together as a team, looking after your colleagues and making sure that you are all pushing in the same direction. It’s about team spirit, which is as vital in a bike-racing team as it is in a football team.

As a rider, you want your team and all the staff at the factory to like you, to love you, to happily go the extra kilometre for you. You want every worker to be dedicated to your cause, so when a data engineer is crunching numbers at the factory at one o’clock in the morning on a cold January night, trying to crack some programme code, you want him or her to stick to their task, rather than give up and go home. No doubt, some Ducati staff lost some love for Lorenzo on Sunday afternoon.

Not only that, you want your team-mate to like you. Perhaps sometime next year, Lorenzo will need Dovizioso to help him out. Dovizioso is such a gent that he might let bygones be bygones, but who knows? This is the foolishness of failing to do the right thing – one day it may come back to bite you on the backside. Speak to Tom Sykes and Loris Baz about the importance of good relations within the garage – their fallout in 2014 probably cost Sykes the World Superbike title. Or Lorenzo and Valentino Rossi, for that matter.

After communicating all kinds of messages to Lorenzo, asking him to make way for their title hope, Ducati changed their story on Monday. They said they had misread the race. This is PR crisis management – maintaining sweetness and light within the factory. However, I suspect that behind closed doors Gigi Dall’Igna and Lorenzo have had franker discussions.

I would love to see Lorenzo, or Dovizioso, win the MotoGP title with Ducati, but I think Lorenzo’s actions on Sunday were those of a solipsistic brat.

Read more: Márquez – the ledge beyond the edge