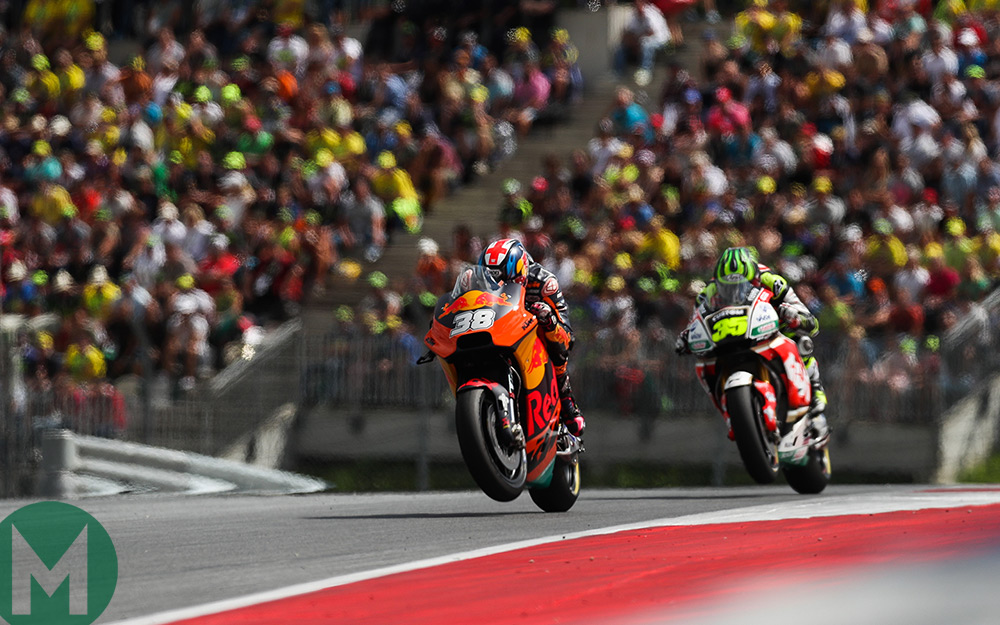 In 1998 Simon Crafar was riding high on 500s. This was the New Zealander’s rookie 500 season and yet by Assen he was already hassling Mick Doohan, then at the peak of his towering career. Next time out at Donington Park, Crafar left Doohan trailing, beating the reigning champion by 11 seconds. It was probably the biggest defeat ever inflicted on Mighty Mick.

Crafar nearly did it again at Phillip Island, Doohan’s home race, breaking the lap record and crossing the line eight-tenths behind the Aussie hero. No doubt about it, Crafar was the Next Big Thing. His Red Bull Yamaha team believed it could challenge for the title in 1999, so long as it changed to Michelin, then the dominant force in 500 GPs. Michelin also wanted Crafar on its side, so the team switched from Dunlop.

In theory, Crafar should have gone even faster on Michelins, but motorcycle racing doesn’t always work like that. The 30-year-old couldn’t get on with the Michelin front. Whereas the Dunlop helped him turn the bike in the vital mid-corner phase, the Michelin didn’t. His results nosedived. In 1998 he scored three podiums from the last eight races. In 1999 he never even made it into the top 10 aboard his YZR500.

When Crafar asked his team if they could change back to Dunlop, he was told it was easier to change the rider than the tyres, so he got the sack. And that was the end of his hopes of challenging for the biggest championship of them all.

A decade later James Toseland arrived in MotoGP as reigning World Superbike champion. He qualified on the front row for his MotoGP debut in Qatar, and scored half a dozen top-six finishes in his rookie 2008 campaign; not bad when he was sharing the grid with Valentino Rossi, Casey Stoner, Dani Pedrosa, Jorge Lorenzo, Andrea Dovizioso, Nicky Hayden and the rest.

He achieved all those results on Michelin tyres. Then MotoGP switched to a control-tyre format for 2009, with Bridgestone supplying the rubber. The Japanese tyres were very different – riders had to hammer the tyres at all times to keep them up to temperature, otherwise they would cool down and lose grip. Toseland learned this lesson in the worst possible way, with a terrifying high-speed highside during preseason testing at Sepang and then another at Jerez. He spent much of the rest of the season injured and gun-shy of the Bridgestones. Inevitably, he got sack, just like Crafar before him. And just like Crafar, this was the beginning of the end of his career.

There is one rider in MotoGP who currently finds himself in a similar position to Crafar and Toseland.

Bradley Smith was a hotshot on Bridgestone MotoGP tyres. It took him a while to get the hang of a Yamaha YZR-M1 and the stiff, grippy rubber, but by 2015 he was there. He scored 10 top-six finishes, including a podium at treacherously damp Misano, where he bravely rode the entire race on slicks. He completed the season sixth overall, behind Lorenzo, Rossi, Marc Márquez, Pedrosa and Andrea Iannone. Smith had made it, at least that’s how it seemed.

In 2016 MotoGP changed tyre brands, from Bridgestone to Michelin. While Márquez, Lorenzo and Rossi carried on winning races, Smith’s results bombed. He never once troubled the top six, then to add injury to insult he sustained a serious knee trauma while contesting a world endurance race during MotoGP’s summer break. He ended the year 17th overall.

This season Smith is developing KTM’s RC16, alongside former Tech 3 team-mate Pol Espargaro. In 2015 Smith made Espargaro look slow on Bridgestones, but last year with Michelins it was the other way around. It’s the same story this year: Espargaro is out-performing Smith.

Smith hasn’t suddenly lost the ability to ride a motorcycle. He just hasn’t clicked with the Michelins and so far hasn’t been able to adapt his technique to get the best out of the tyres. The French tyres work fastest with smooth, arcing lines, whereas Smith has always been more of a point-and-squirt rider.

“Changing tyres can be a bigger thing than changing bikes, 100 per cent,” says Smith. “The Michelin front allows you to carry more corner speed but it doesn’t allow you to charge into the corner, which is something I like to do. With the Michelins it’s more of a 250 style – a big, long arc. You have to get off the brakes, get to maximum lean super-early and stay there. I like to be able to go in hard on the front, but with the Michelins that doesn’t gain you anything. This year Michelin has made a big step forward in terms of feedback and feeling, because last year there were a lot crashes, so we do know where the limit is now.

“The Michelin rear doesn’t hook up like the Bridgestone rear. When we had Bridgestones the rear was slippery on the edge of the tyre but once you got it up onto the shoulder it was like the bike had hyperdrive out of corner. The Michelin has more grip on maximum lean, but you have to get it onto the massive fat part of the tyre to get some drive traction. That’s probably a software thing as well. The traction-control system we’ve had since last year isn’t as sophisticated as what we had before, so now it’s a case of figuring out the slip rate, then working out what’s the maximum acceleration you can get from that slip rate.

“So now it’s all about corner speed: you go through the corner at maximum lean and open the throttle against the TCS. The guys who like to slow it down mid-corner to prepare the exit don’t gain anything anymore. Dani [Pedrosa] was a super-specialist at that. Even now, you can see Dani to the inside of everybody because the only way for him to get traction is to slow it down more mid-corner and then pick up the bike, but as we’ve already said, he doesn’t gain anything because he hasn’t got the corner speed. For Dani, it now depends on track layout and so on, which is why we see his results so up and down.

“I was able to extract the best from the Bridgestones, whereas now I sometimes struggle because the KTM feels to me like a point-and-squirt bike, which is good for me, but it doesn’t seem to match the Michelins so well. The thing I notice with Pol and Mika [Kallio] is that their riding style is more like that 250 style.

“When I was doing 125s I found them tough – it took me four or five years to be really strong on 125s. When I moved to Moto2 I didn’t find the switch difficult at all, because Tech 3’s Mistral Moto2 bike was quite a point-and-squirt bike. When I moved to MotoGP in 2013 it took me a long time to adapt to the M1. We finally figured it out in 2015 when we adapted the bike for me so I could point and squirt it more and more.”

Smith now has Kallio, KTM’s long-time test-rider, breathing down his neck. The Finn is desperate for a return to full-time racing and is currently impressing the paddock with his occasional wildcard rides.

“Unfortunately it takes me a while to adapt to what I need to do,” says Smith says, whose best dry-race result this year is his 13th place at the French GP. “It’s all a confidence thing. Once I have my head figured out, the confidence comes and then I can do it. Unfortunately it’s taking too long, so I need to condense that time. It’s qualifying where I have my main problems. I feel like we are slowly getting there, but it’s taken a lot of work from everybody to find out exactly what I need.”

Smith has already tried some radical set-ups that force him to adjust his riding technique to suit the Michelins.

“We’ve tried setting up the bike high at the rear and low at the front to take away the braking stability, so I can’t brake how I used to brake and charge into the corner. Now I almost get to the point of ‘oh my God’ then I just should trust the front tyre and release myself into the corner. It doesn’t feel natural but it’s helping. Before we were setting up the bike so I could brake right to the apex, but the Michelins don’t want to do that, so I’m going back to a 125/250 style and trying to make that work.

“The team is trying different bits and pieces. Inside the garage and at the factory there’s non-stop help to get me where I need to be. Pol and Mika continue to push me. Mika has done a lot of testing – 80 or 90 laps a day for two or three days at every test – so he’s figured out how to ride the Michelins. He has programmed himself into that way of riding and you can see it loud and clear on the data. I’m not taking anything away from him – he’s really figured it out.”

Kallio was due to have a single wildcard ride this year, at KTM’s home Grand Prix at the Red Bull Ring, where he achieved the factory’s first top-10 finish on a dry track. That result won him another wildcard at Aragon, where he rode another great race to finish 11th, convincing KTM to give him a third outing at the Valencia season finale.

The inevitable conclusion is that KTM is weighing up its options for 2018: Smith or Kallio to accompany Espargaro. Smith has a two-year contract with KTM, but the factory could simply swap rider roles, with Kallio contesting all 19 races, while Smith becomes test rider and occasional wildcard racer.

It’s not over yet for Smith. The Briton still has time to turn things around and hopefully KTM’s latest chassis revision, which he should race for the first time in Japan, will make the difference.

Related: Knocking on the factory door