It’s the question you get asked half a dozen times a race weekend, usually by expectant Rossi fans, hoping for a positive answer: when is Valentino going to win a race?

The answer is obvious: I don’t know. But when you follow that with an offhand remark, suggesting that maybe he won’t win another MotoGP race, their faces collapse into gloom.

I hope VR does win again and, if he does, I hope it’s a straight victory, not a victory of circumstances, due to weird weather or other riders burying themselves in the gravel.

But it’s a tall order. It’s hard to see anyone squeezing more speed out of the Yamaha than Jorge Lorenzo. The Spaniard is a 21st century ‘Steady’ Eddie Lawson – so glassy smooth that he looks slow, when in fact he’s the fastest rider in the world.

Friday at Catalunya was a special day for Rossi – the first time in more than two years that he’d gone to bed as the fastest rider in the world. He led the first two practice sessions and that meant a lot to him. “The team and I know it’s only Friday but we are happy – it’s a good feeling to be in front.”

Lorenzo, however, was dismissive of anyone attaching any significance to the result. “I don’t think today’s classification gives any conclusion,” he said. “Different riders were on different tyres so it’s difficult to know the real potential.”

He was right of course. But Rossi’s race potential turned out to be pretty good. Although he never featured in the processional three-way fight up front, he crossed the line just 5.874 seconds down on winner Lorenzo (which was a fraction closer than in Qatar, a peculiar event which bears little relation to other races). That’s a difference of a mere 0.2 per cent.

During the mid-stages of the race Rossi was sometimes actually faster than Lorenzo, Dani Pedrosa and Marc Márquez. He faces his biggest problems at the start of races, trying to run with Lorenzo and the rest with 15 kilos of fuel on board. As the load reduces, his speed increases.

There are three main reasons for his difficulties in the early laps: he doesn’t like Bridgestone’s much-maligned softer-construction front slick, he can’t get on with Lorenzo’s set-up and he is still searching for that last nth of confidence after two morale-sapping seasons on the Ducati.

Bridgestone introduced its softer-casing front for 2012, in response to numerous crashes, mostly in cool track conditions, during the previous year or two.  It wasn’t a great time to make the change because the new 1000s were significantly faster and seven kilos heavier than the old 800s, so they asked a lot more of the front tyre during braking and corner entry.

Last year, Casey Stoner was the tyre’s most vociferous critic. “It doesn’t give you enough support on the brakes – it squishes too much – and it’ll get worse at hotter tracks where we need more support,” he said.

Stoner has been proven right. This year the 1000s weigh another three kilos, which exacerbates the problem, especially at hot races like Sunday’s Catalan GP.

“We suffer with the front casing,” said Rossi after the race. “I had a lot of movement from the front. I was very close to crashing, three or four times, so it was very dangerous and I had to slow down a little. I never agreed with [the introduction of] this tyre, but when it happened I was with Ducati and in the s**t anyway.”

But if Lorenzo can cope with the tyre, why doesn’t Rossi just copy his team-mate’s set-up? Because the Italian and the Spaniard ride differently. Lorenzo rides more smoothly and uses a longer wheelbase, which gives him better braking performance, because it doesn’t load the over-stressed front tyre so much. However, when Rossi and Tech 3 rider Cal Crutchlow try this set-up, they can’t find enough corner-exit traction.

“We use different settings compared to Jorge,” says Rossi. “We use different weight distribution, different geometry and a slightly different fork. Anyway, we are working on the settings – we must try to make more steps because we aren’t so far from the others.”

They continued that work during Monday’s tests at Catalunya. “The front tyre is one of the major issues for us,” agrees crew chief Jeremy Burgess. “But we can do a lot to help him with that and that’s what we did in the tests.”

Rossi pronounced himself happy with the work done on braking performance at the tests. Now he just needs to find another per cent or two from his riding.

“To ride the bike at 100 per cent like Jorge isn’t easy,” he says. “I need time to get there, especially after two years with Ducati.”

How much time? No one knows…

Click here to read more from Mat Oxley on MotoGP. 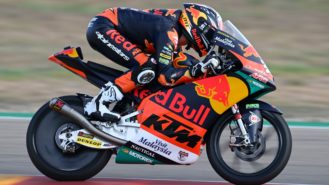 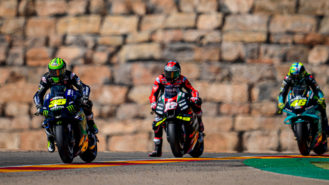 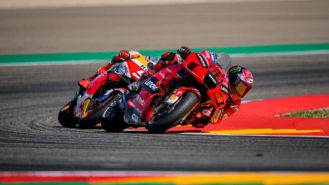