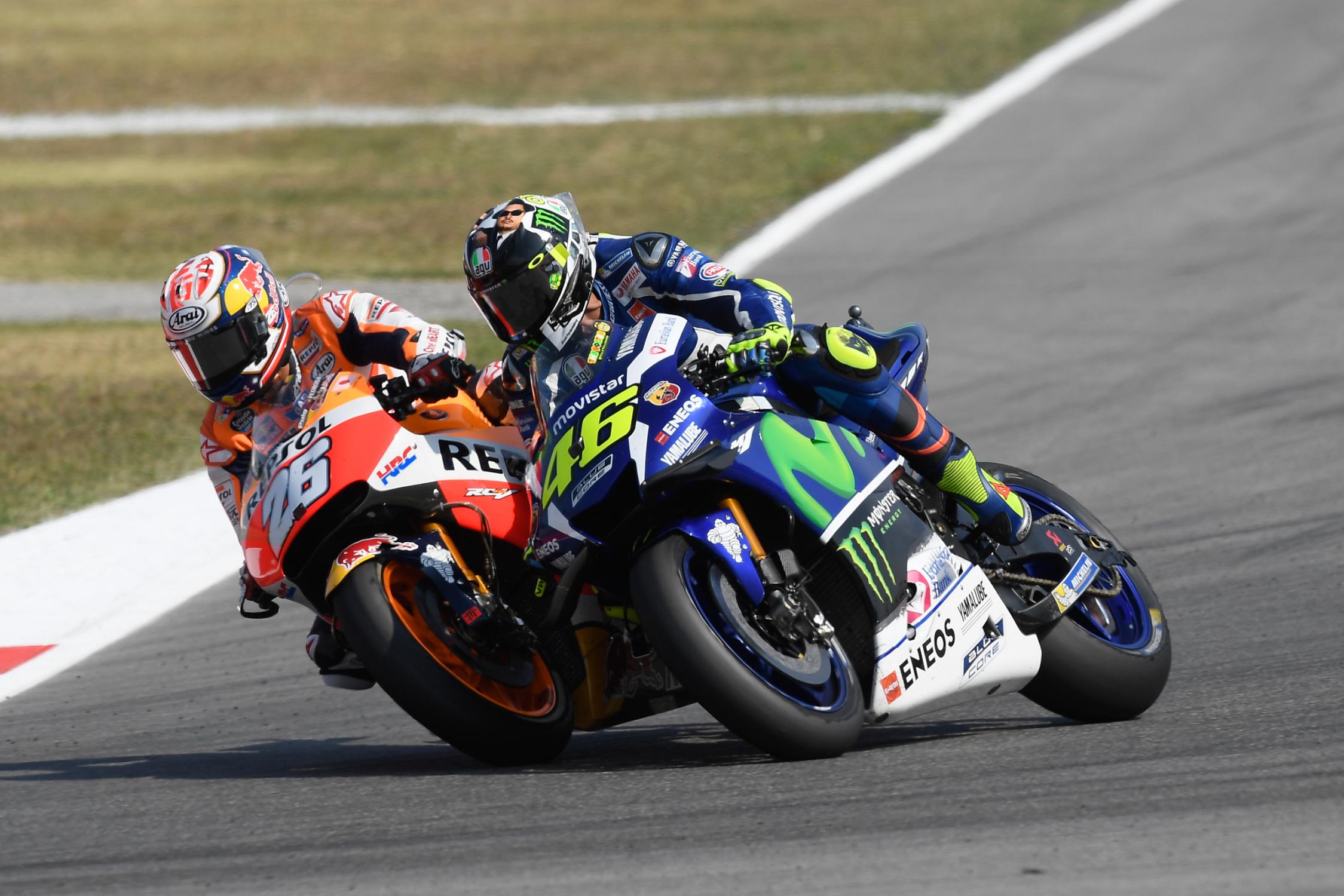 The first time I interviewed Dani Pedrosa, in 2002, I asked the 17-year-old (born in 1985) what kind of music he liked. 1980s pop music, he told me. Wow, I thought, his mentor Alberto Puig even tells him what music to listen to.

Therefore I’m not sure if Pedrosa has ever listened to the song That’s Entertainment sung by new-wave heroes The Jam. (The greatest band the world has ever known, in case you didn’t already know.)

The song is a paean to the simple pleasures of life: “Cuddling a warm girl and smelling stale perfume… watching the tele and thinking about your holidays… a hot summer’s day and sticky black tarmac…”

At the moment, Pedrosa has no greater love than for sticky black tarmac. Without it, he is rather lost. Sunday was his first win of the new Michelin era and his third podium of 2016, the other two also achieved on burning hot asphalt at Jerez and Catalunya. There have been only four races this year in which track temperature has exceeded 40 degrees: Jerez, Catalunya, Misano and Mugello, where Pedrosa scored his next best result in fourth, less than two-tenths of a second off the podium.

Pedrosa’s difficulties have been well documented; the Spaniard stands 1.6 metres tall and weighs 51 kilos. In an era of single-tyre racing, when one size must fit all, Pedrosa’s diminutive size is a real handicap. Many of his rivals have no doubt that he would’ve won at least one MotoGP title by now if he was a bit bigger and a bit heavier. He simply isn’t large enough to generate heat into the tyres unless the sun is shining.

Thirteen-time world champion Angel Nieto says Pedrosa rides like an angel, sweeping divinely from one corner to the next, never a wheel out of line, rarely a shimmy of the handlebars. He is totally at one with his machine, even if this is only because he has no choice: aboard a MotoGP bike the little man looks like an angel strapped to a Scud missile. 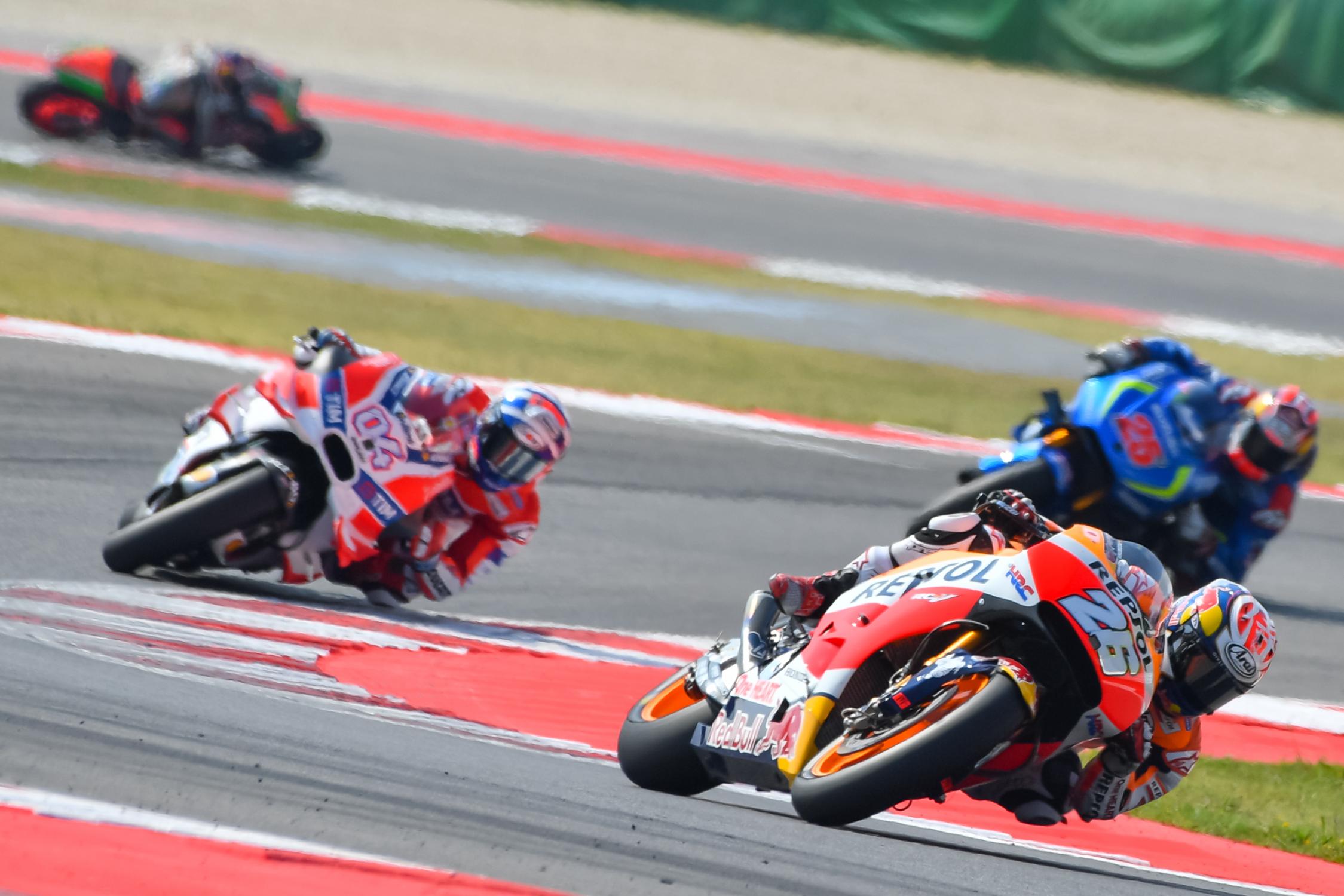 Pedrosa cannot ride like Valentino Rossi and others because he cannot move fore and aft and left and right to transfer load as he rides through corners. And he can’t use his petite arms and legs as levers to force his Repsol Honda into submission. He has had to develop his own unique riding technique, letting the motorcycle have its way while delicately keeping it heading in the right direction.

This is the only way he can ride a MotoGP bike, but in fact this technique exacerbates his tyre temperature problems because he’s so smooth that he doesn’t work a lot of heat into the rubber. Jorge Lorenzo, with his similar glass-smooth style, has had the same problems on cold racetracks this year.

Even during the Bridgestone years Pedrosa had trouble getting enough heat into the tyres. I recall watching him crash at Le Mans’ first chicane a few years ago. I asked him why. He replied that his front tyre had cooled down too much on the start/finish straight.

Many people thought he would be better off with the Michelins, since the French tyres historically use softer casings than the Bridgestones, so they flex more, which helps generate more heat. Also, Michelin’s front wasn’t up to much during winter testing, so it seemed like his smooth, floating style, which stresses the front tyre very little, would be the way to go.

In fact, Pedrosa has been worse off with the Michelins. Until last Sunday this had been his worst year ever; at least since his rookie 125cc season in 2001, since when he’s won at least one race a year, across the 125, 250cc and MotoGP classes. 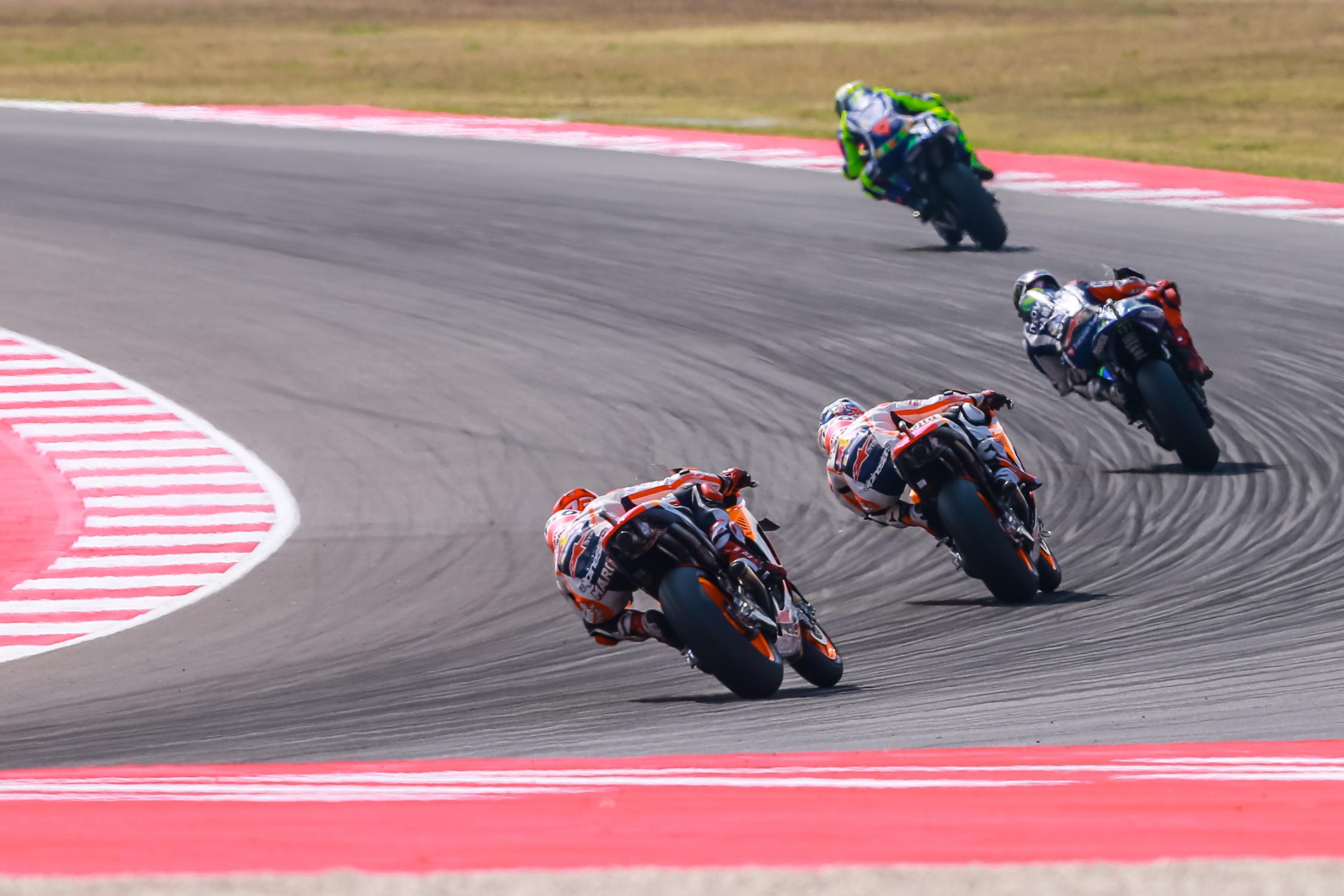 He has had horrible struggles on cold tracks this season – when the mercury tumbles, so usually does he. Most memorable was his straight-line crash during Friday morning practice at the Red Bull Ring, when the asphalt was a chilly 14 degrees. He braked for the final turn and the front tyre skidded away from him in an instant, before he had even thought about turning into the corner.

It’s not easy to regain confidence when that kind of thing happens, but Pedrosa is used to picking himself up, dusting himself down and getting on with the job. He is probably the most injured rider on the MotoGP grid – broken bones have lost the former 125 and 250 champ at least one MotoGP title.

But bit by bit, HRC tweaked his RC213V set-up to work better with the Michelins. At Silverstone – hardly a warm weekend – he at last found some front-end confidence so, he could ride in the group fighting that breathtaking battle for second place.

At Misano the main problem – especially for the RC213V which was originally conceived to take advantage of the Bridgestone front by braking madly deep into corners – is usually excessive front-tyre temperature, which is why Michelin brought a new front slick with stiffer casing and thinner tread to reduce the heat generated by heavy braking into the track’s many tight turns.

Most riders found this stiffer casing more stable into corners, but Pedrosa’s fellow Repsol rider Marc Marquez couldn’t race the new tyre because it was only available in soft and medium compounds, which his super-aggressive style would’ve worn out before the race was over. He therefore had to run the old casing with harder rubber, which didn’t have the corner-entry grip he needed. 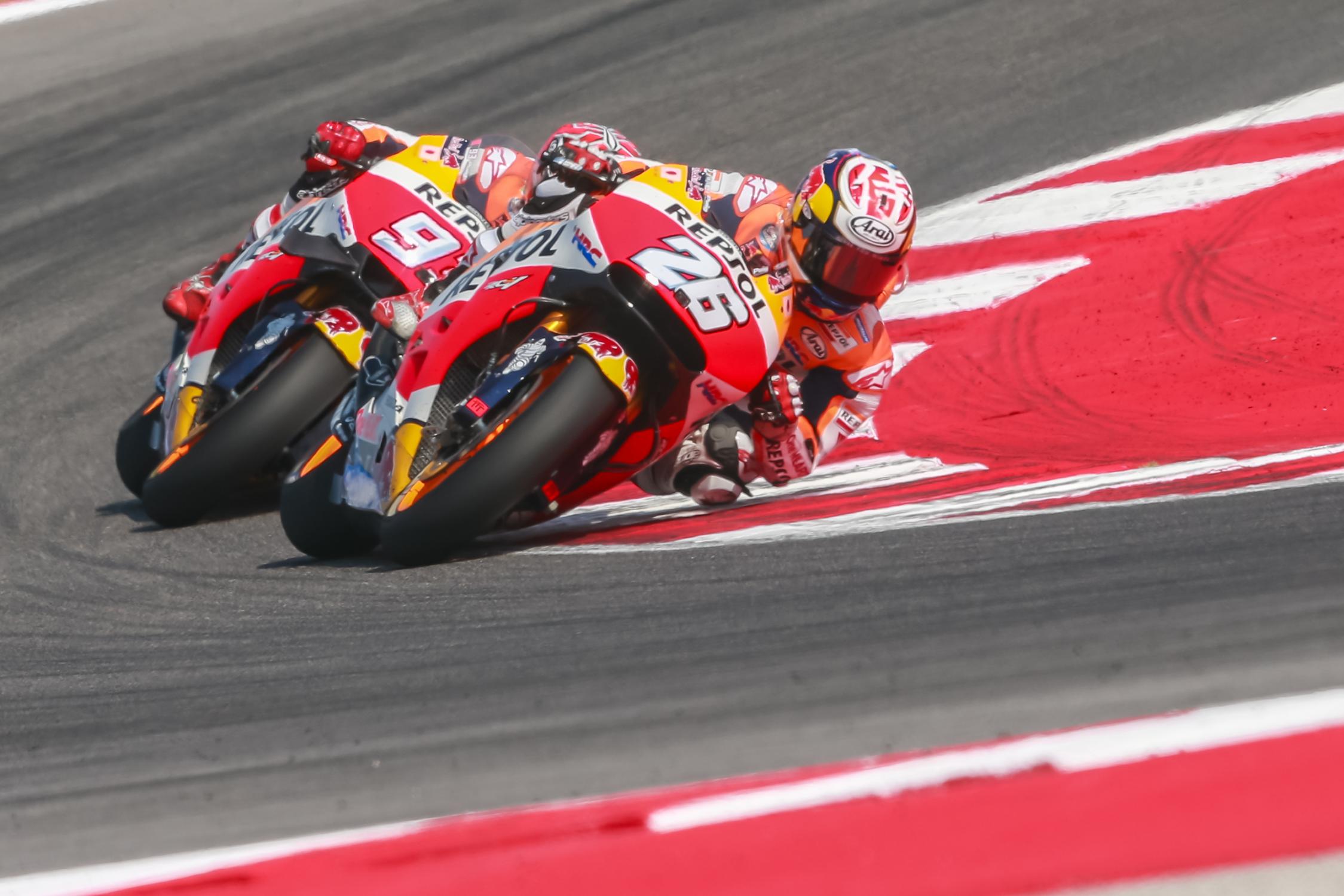 Pedrosa meanwhile chose the softest front with the new casing – for once his light weight and sweet style was an advantage because he was the only one of the top men able to run the grippy tyre – and he made everyone else look like they were stood still. In fact Misano was arguably the greatest of his 29 MotoGP wins because he came from further back than he’s ever come before: from sixth on lap one to successively dive past Marquez, Andrea Dovizioso, Maverick Vinales, Lorenzo and finally Valentino Rossi.

Like Lorenzo, Pedrosa usually wins by getting out front early on and clearing off because he enjoys a clear track more than a brawl with his rivals. This time he had way more speed into corners and easily thrust past everyone.

The new front worked especially well for him because the stiffer casing deflects less (squishes less, if you prefer) as the rider brakes and turns into the corner, when all the load is on the front tyre. This means the tyre retains a better profile, so the bike turns better, which is particularly important for Pedrosa, who can’t force the machine to turn by using his body weight, arms and legs.

So, Dani Boy must be looking forward to scoring more wins at the final five races of the season. Well, maybe not. Michelin’s new front casing was developed specifically for Misano’s unique demands, so it may or not be brought to other races. No doubt, Michelin engineers are right now considering their tyre allocation for Aragon and beyond, while Pedrosa sits home, keeping his fingers crossed