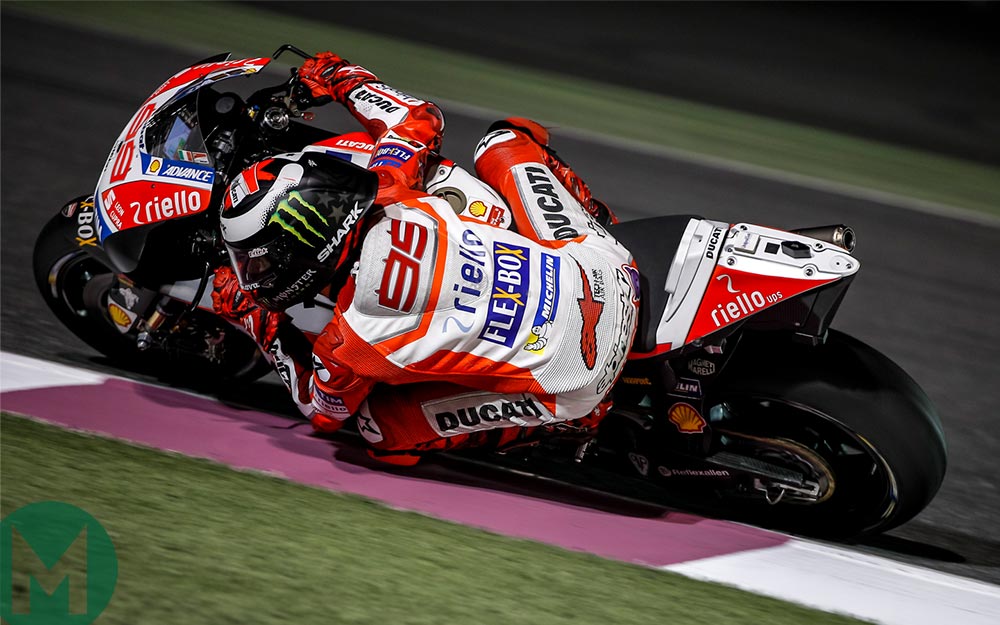 We already know Viñales will most likely be competitive everywhere, while Lorenzo will probably be fast wherever the Ducati works, which includes Losail, where the bike was in the thick of the fight for victory in 2015 and 2016.

It was the same story in last weekend’s final preseason tests; three Ducatis in the top five: Andrea Dovizioso, Lorenzo and Alvaro Bautista, with Dovizioso just 0.071 seconds behind Viñales and Lorenzo less than two tenths down. That was quite a turnaround from the previous tests at Phillip Island, where there wasn’t a single Ducati in the top six.

The Desmosedici struggles with Phillip Island’s multitude of longer corners because the bike has a mid-corner turning problem. While other MotoGP machines hook neatly through turns so the rider can get on the power nice and early, the Ducati understeers in the middle of the corner, so the rider must do some more work before he can get the bike pointing in the right direction, ready for the throttle.

Losail also features a lot of sweeping corners, but the Ducati seems to suffer none of the problems it suffers in Australia. How come? 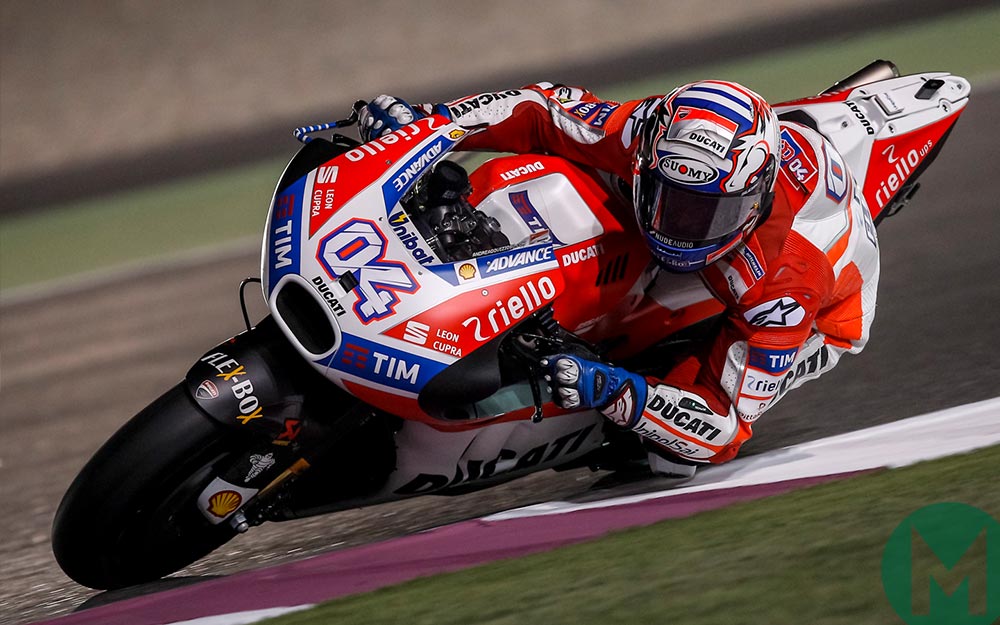 At Losail, it isn’t the circuit layout that favours the Ducati but rather the grip character. Tyre adhesion is sketchy at best, because the track isn’t used enough, the surface is often dirty and the night air is so humid.

Low-grip conditions usually cause more problems at the front end, where grip is more edge-of-the-cliff, than at the rear end. This means the other bikes cannot exploit their usual mid-corner turning advantage, which comes from the front tyre. The difference isn’t huge, just a few hundredths at every turn, but it all adds up.

On the other hand, the Ducati can exploit one of its strong points to great effect, despite the sketchy grip, or perhaps because of it. The Desmosedici has excellent corner-exit traction, so its riders can get on the throttle sooner and harder than their rivals.

This matters most of all exiting Losail’s second-gear final corner, where the Ducati digs in and drives while some other bikes struggle with wheelspin. Corner-exit speed is the real gold in racing, because whatever advantage you carry in that split second leaving a corner, you get to keep with you all the way down the next straight. This is an especially important deal when the straight is Losail’s one-kilometre start-finish. And then there is the Ducati’s mighty horsepower, which is more of an advantage with every shift of gear, and worth another few tenths on the high-speed run past the pits.

Lorenzo’s pace at Losail shouldn’t come as a great surprise given the Ducati’s horsepower and traction, plus his own ability at the circuit, where he’s taken three wins from his last five visits, but it does suggest that he is getting to be friends with the bike.

This is a fundamental part of motorcycle racing. MotoGP and Formula 1 world champion John Surtees, who passed away last week, used to describe the art of racing as the rider “having a conversation with the machine”. Lorenzo is already having that conversation with the Ducati, just as Vinales has it with the Yamaha. 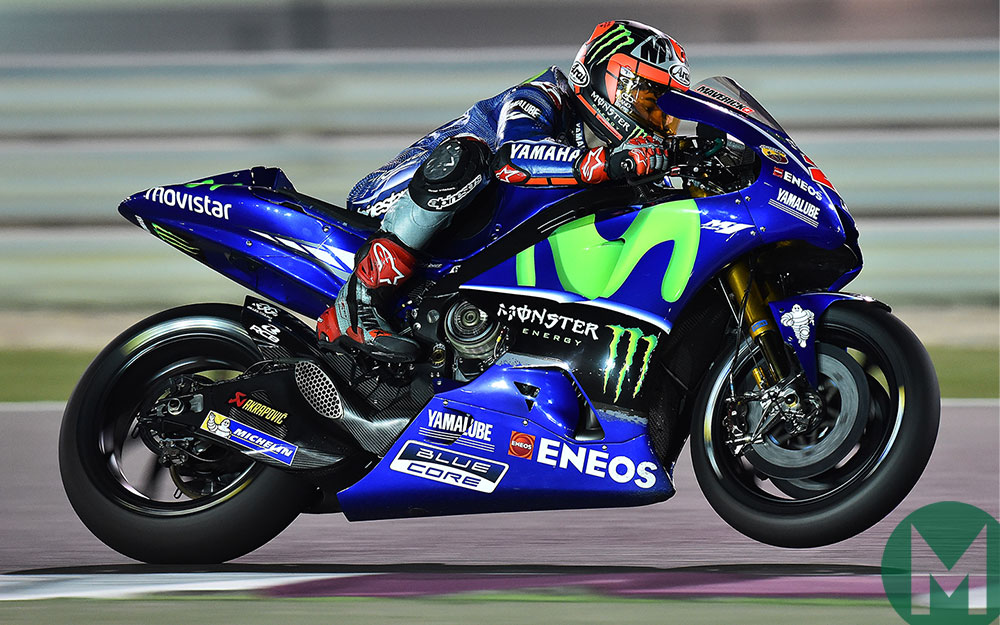 This is the process of the machine letting the rider know what it needs to do the lap times, then the rider responding accordingly. This request-response scenario is a mark of the supremely talented. Someone like Valentino Rossi takes it to the next level by publicly anthropomorphising his motorcycle, giving it a pat or a kiss after they’ve had a good result together.

Viñales certainly has that ability to understand exactly what his motorcycle needs to go fast, which is why he has dominated each of his first four outings on the YZR-M1, at Valencia, Sepang, Phillip Island and Losail.

The 22-year-old is a great all-round rider and has exceptional feel for the front tyre; so much so that he was the only one of the top men to crash less often last year with Michelins than he did in 2015 with Bridgestones. That’s the rider listening to the tyre and understanding what it can deal with and what it can’t.

Viñales is lucky (in fact it’s not luck, this is why he joined Yamaha) that the M1 is the most intelligible of all the MotoGP bikes, which is why it’s long been the most user-friendly. The M1 is neutral and easy to understand, which is why most riders can climb aboard and almost immediately take it to the limit. Tech 3’s Jonas Folger and Johann Zarco are the latest riders to experience this feeling; hence their impressive preseason pace.

The Ducati and Honda are less easy to understand, so it takes a genius rider to comprehend what the machine needs and then adapt his riding technique accordingly. This is Marc Marquez on Honda’s RC213V. It was also Casey Stoner on Ducati’s old Desmosedici.

Viñales also understood the Suzuki pretty quickly when he graduated to the premier class in 2015. In his very first MotoGP race at Losail that year he rode the entire race without any traction control, after the electronics went AWOL at the start. Many riders would have pulled into the pits as soon as the warning lights started flashing. Not Viñales ; he just got on with it, listened to the bike and adapted accordingly.

Andrea Iannone, who replaces the Spaniard at Suzuki, is another fast rider but I’m pretty sure he’s not so good at conversing with his machine. I imagine that his conversations involve a lot of shouting and not a few swear words.

Viñales will be difficult to beat on March 26 but I think Lorenzo may risk more than he usually does in going for the win, because if he’s successful he will immediately remove one of Rossi’s unique achievements. In seven decades of Grand Prix racing, Rossi is the only rider to have won back-to-back premier-class races with different manufacturers. Without doubt one of the reasons Lorenzo joined Ducati is because he wants to chisel away at Rossi’s legend. Obviously he will never undermine the Italian colossus, but he will be happy just to chip away a few fragments, now and again.