Honda’s RC213V engine is a wild thing, but this is not an unusual problem for them to solve. Here’s why… 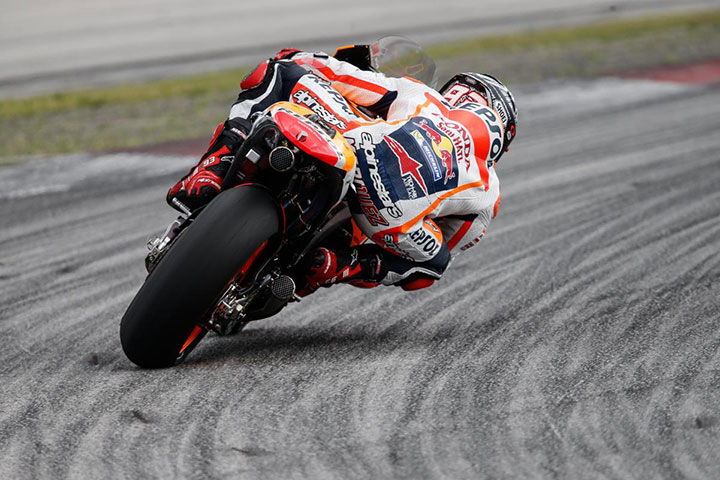 Many people will tell you the most important things about preseason tests is lap times. These numbers are endlessly analysed by so-called experts attempting to predict the outcome of the new season, rather like weirdos trying to divine the future by reading the tealeaves in the bottom of their teacups.

It’s all a load of nonsense, of course. Individual preseason lap times mean nothing. If they did, Marc Marquez would’ve won last year’s MotoGP title.

Over the years I’ve worked out a much better way of understanding what’s really going on during preseason testing. You hang out at the airport hotel restaurant, just round the corner from the Sepang racetrack, quietly supping a beer and waiting to see which teams sit down for dinner first.

This week at Sepang it was generally the factory Yamaha squad who were first at the table. Meanwhile Honda mechanics were nowhere to be seen – they were still toiling away in their sweatbox pit garages, fettling the RC213V for the 2016 MotoGP campaign, the 68th season of Grand Prix racing.

The lap times at the end of the three-day session didn’t make for happy reading for HRC. It’s star man Marc Marquez was fifth fastest, a whopping 1.2 seconds behind Yamaha’s champ Jorge Lorenzo, who floated like a butterfly and stung like a bee, armed with Michelin tyres and Windows 95 (or thereabouts) electronics. It seems his buttery smooth style works even better with less grip and fewer rider-aids. Even Valentino Rossi was almost a full second adrift of his team-mate. But it was Honda’s travails that really made the headlines. 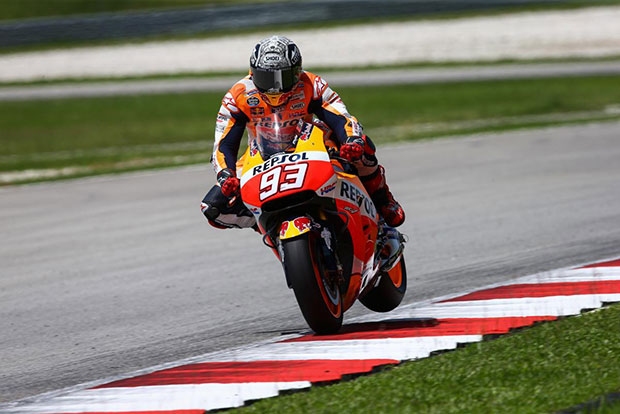 Honda seem to like doing it the hard way. While it’s main opponents Ducati and Yamaha have long since taken the easy road by building softer MotoGP engines with ‘big bang’, ‘long bang’ or ‘twin pulse’ cylinder firing configurations, Honda continue to strap its riders aboard so-called screamers, always aiming for the biggest horsepower figures. You only need stand trackside to hear the difference between a long-bang and a screamer to understand the reality for those people holding the handlebars: an M1 or GP16 comes past, droning and popping like a tricked-up street bike, then an RCV comes by, wailing, snarling, gnashing its teeth and kicking its rider into hyper-drive. The RCV exhaust note is petrol-head heaven, if a wee bit scary.

What drives Marc Marquez? Mat Oxley interviews the Spaniard, from the Archive February 2014.

Honda runs a 90-degree V4 because it wastes no power through vibration. A 90-degree V4 makes huge power, at a cost of some rideability.

And herein lies Honda’s problem. The bike may be mega-quick on the straights, but it’s a handful into and out of the corners. In recent years Honda could handle this with its super-trick electronics, because it built motorcycles that were a perfect synergy between engine, chassis and space-age electronics. It was probably the first factory to do such a thing and now it’s had to dump all its hard work and learn about Windows 4.

“The unified software is like what we were running ten years ago,” hissed HRC vice-president Shuhei Nakamoto at Sepang. His annoyance is understandable: Nakamoto is in the business of trying to build motorcycles that are better than the previous models and here he is, rewinding to the past, trying to make the best of an electronics setup that would’ve been better suited to the 2006 season than 2016.

So, the obvious question is this: why doesn’t Honda build a softer big-bang engine like everyone else? After all, wasn’t it Honda that pioneered that very technology with its 1992 NSR500 GP bike?

Honda won’t build a big bang because it doesn’t like running with the herd, it doesn’t like to copy. Its history as a force in Grand Prix racing is a story of always doing things its own way: sometimes failing but more often succeeding.

Honda still see racing as an engineering exercise as much as a sporting and marketing exercise. It goes racing to learn, not only to win. Ideally it goes racing to learn and win, but as Soichiro Honda once said: you usually learn more by losing than you do by winning. When Honda has a problem, it doesn’t always take the easiest, most sensible way out, it goes looking in other directions, trying technologies that might never otherwise have been tried.

You could call this a contrary nature: to always do what everyone else isn’t doing. It all started in the 1960s. While Suzuki and Yamaha were winning world titles with its new-fangled two-strokes (nicked from East German factory MZ), Honda stayed true to Honda San’s four-stroke roots. He refused to join the super-quick ‘stinkwheels’, so instead he built fabulous four-strokes, the like of which we will never see again: a six-cylinder 250, a five-cylinder 125 and a two-cylinder 50, most of them revving beyond 20,000rpm. The RC115 50 went to 22,000rpm and made 280 horsepower per litre.

That’s more than a current MotoGP bike and this was 1966, exactly half a century ago!

Even a decade later Honda refused to surrender to the relentless march of the two-stroke. Instead it spent terrifying amounts of money building a 500cc four-stroke with oval pistons, eight valves per cylinder and two con rods and two sparks per cylinder, all in an effort to defeat the pesky two-strokes. The NR500 failed famously, but not before Honda had wowed the public with this most quixotic of machines. Merely rebuilding an NR took eighty man hours! 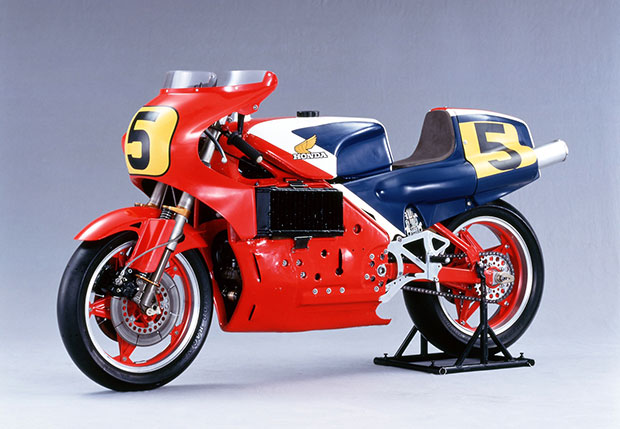 The ignominious defeat of the NR – sometimes christened the Never Ready – did finally convince Honda that it had to swallow that bitterest of pills and surrender to the ‘stinkwheel’ cause. In the early 1980s 500 GPs were dominated by four-cylinder Yamahas and four-cylinder Suzukis, using rotary-valve induction and aluminium chassis. The most sensible thing for Honda to do – especially in the light of the NR’s embarrassing defeat – would be to adopt the tried and trusted technology used by the companies who were doing all the winning.

But no! Honda sent engineers to Europe to take a look at the GP bikes that were taking men like King Kenny Roberts, Randy Mamola and Barry Sheene to victory in 1981. Its apparently barking conclusion: don’t build a rotary-valve four with an aluminium frame, build a three-cylinder engine, fed by reed valves and housed in a steel frame. 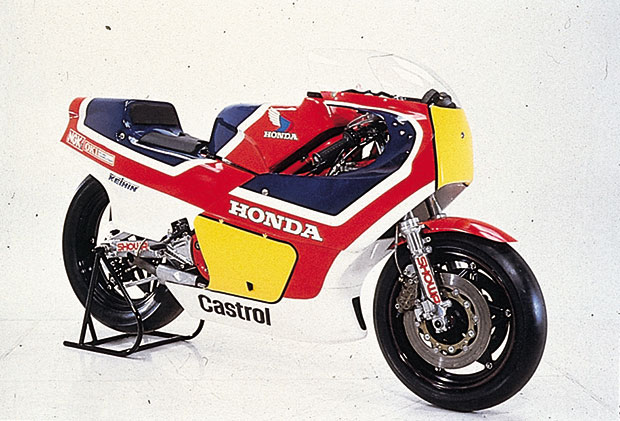 No surprise that the same people who laughed at the NR also laughed at the NS500. How on earth could a triple be the faster fours? In fact, the NS was probably the first modern GP bike. The packaging of the machine was the big deal; it wasn’t just another engine with a chassis around it. The NS won races in its first season and took Freddie Spencer to the 1983 500 world title because it was faster around a racetrack than the big, unwieldy Yamahas and Suzukis.

When the triple finally ran short of horsepower, Honda did indeed build a four, for the 1984 season. But again it went its own way. Instead of building a twin-crank engine like the Suzuki and Yamaha, it built the single-crank NSR, which had problems like the so-called single crank ‘voodoo’. The torque reaction of the single crank tended to make the bike run wide, so it fixed that problem by reversing the direction of crank direction. 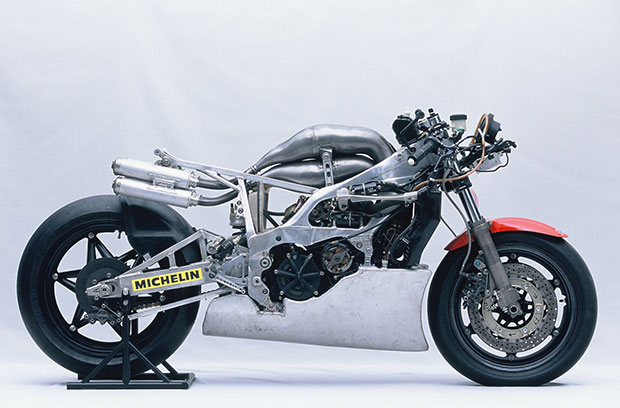 Neither did it build a conventional chassis. It put the fuel tank under the engine and routed the expansion chambers over the engine. At the time this made sense, especially to car engineers who know that a low centre of gravity equals speed. But it doesn’t in bikes, where the moment of inertia plays a very different role. The ‘upside-down’ NSR was another failure. 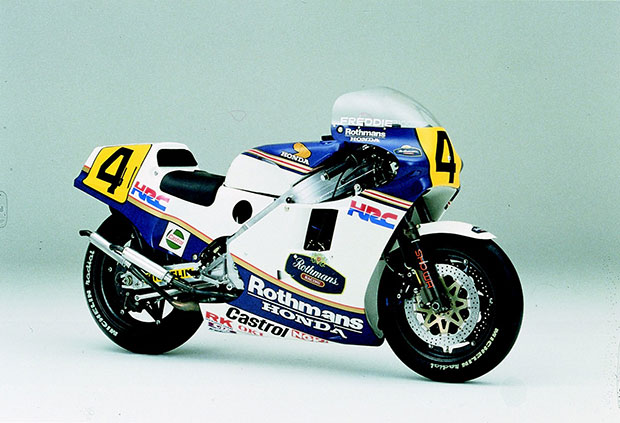 But again, HRC learned something. For 1985 it changed the chassis, then changed the firing configuration and in 1992 it introduced the rider-friendly big-bang NSR engine which revolutionised 500 GPs – allowing Europeans to ride 500s again – and went on to win seven of the last ten 500cc titles. By taking the road less travelled it created a motorcycle that was much better than any bikes it might have copied.

It was the same with the NSR’s MotoGP successor, the superb RC211V. The V5 was entirely different from the V4s and inline fours on the grid. It was also way better than them and won 27 or the first 32 MotoGP races.

So it’s important to remember Honda’s history and its philosophy when considering the configuration of the current RC213V.

Its 2013 and 2014 RC213V took Marquez to back-to-back titles. Some suggest that last year it may have suffered from that Japanese illness ‘Victory Disease’ which afflicts all companies who enjoy too much success.

The problem now is that although Honda has the strongest, wildest engine in MotoGP, its efforts to use its expertise to solve problems are compromised by increasingly stringent MotoGP tech rules. Those who argue that the latest so-called cost-cutting rules dumb down the sport are entirely correct – TV-friendly entertainment is now the priority, not engineering development. But this is still the MotoGP world championship, so it is Honda’s job to work within those rules and use ever greater ingenuity to get them better of them.

HRC now has six weeks before MotoGP engines are sealed on the eve of the season-opening Qatar GP. Will it come up with some magic engineering trick to give Marquez and the rest an engine that’s as friendly as an M1? Or might it work night and day for forty days and build something very different?

With Honda, you can never be sure…