The vital importance of straight-line braking in MotoGP’s Michelin era explained and the big question: can Lorenzo win the title for Ducati? 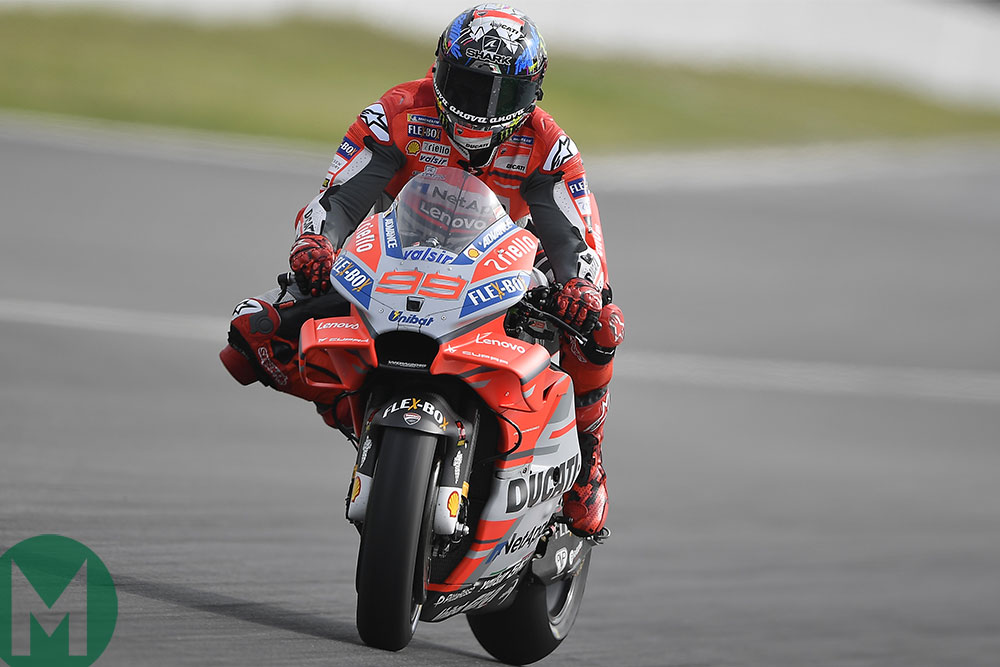 Over the years there have been many weird and wonderful world championships, but this year’s may be the weirdest and most wonderful of all.

There’s a three-time MotoGP world champion struggling to find his way with a recalcitrant motorcycle. His lack of results cause him to fall out with the factory management, so he looks elsewhere for employment, but none of the other factories want him. There are rumours of retirement and talk of a ride with an independent team, which doesn’t even exist. But this seems his only option.

Then he stuns us all by signing for the strongest team in the paddock at the very moment a vital new part arrives to transform his recalcitrant motorcycle into a winning machine. Then he goes and wins the next two races, comfortably outpacing the bike he will ride next year and his future team-mate, who was supposed to be unbeatable. I’ve been here 31 years and I can’t remember a stranger premier-class summer.

That’s what has happened over the past few weeks, but why has Jorge Lorenzo gone from perennial struggler on Ducati’s Desmosedici to the fastest man in MotoGP? Of course, we know about the plastic fuel tank hump that allows him to perform better during straight-line braking, but why exactly has this simple new part made such a difference?

As always, it’s all about the tyres. The Michelin front isn’t as good as the Michelin rear (it was the other way around with the Bridgestones), so riders can’t carry as much speed into corners and they can’t use the front tyre to scrub off speed during the entry phase. Hence all the fuss about straight-line braking, which has long been one of the Ducati’s strongest points, first for Andrea Dovizioso and now for Lorenzo.

Let Aprilia rider Aleix Espargaró explain. “Michelin has done a great job because we beat the lap record wherever we go,” says the Spaniard.

“With the Michelin the time between when you start braking and when you release the front brake has to be the very minimum. Dovizioso was the best at this. Whenever I’m with Dovizioso he never brakes later than me. We start braking at the same place but when he releases the front brake he’s 5kmh [3mph] slower than me, so in the same few metres he has lost more speed than me, so when we start leaning into the corner I’m risking 75 per cent while he’s risking 65 per cent. It’s all about stopping the bike in a straight line as fast as possible.”

Lorenzo had already got the hang of this brick-wall, straight-line braking technique, as he proved at Jerez, where Dovizioso was unable to make a clean pass on him. But he could not sustain the technique, because he couldn’t handle the g-forces over race distance.

If this sounds a bit pathetic, consider this: when a mortal gets to use carbon brakes it’s easy to get caught out by their vicious stopping power. This has happened to me a couple of times, once while testing Mick Doohan’s Honda NSR500 at Catalunya sometime in the 1990s. When I braked for Turn 9 I experienced the weird kind of weightlessness that astronauts feel in space: my backside lifted off the seat and my whole body was thrown over the front of the bike, so I was looking at Doohan’s number-one plate, upside down. I was all set for the biggest crash of my life, but somehow I was still holding the handlebars and when I let go of the front brake, the g-force disappeared and I landed back on the seat.

I learned from that bowel-loosening moment that whenever you hit the brakes with carbons brakes (carbon-carbons, to name them correctly) you must dig the soles of your boots deep into the footpegs and grip the tank with your thighs like you’re riding a bucking bronco, simply to resist the g-forces trying to hurl you forward. That was probably 20 years ago, so you can imagine the power of today’s MotoGP brakes.

According to Brembo data, there are nine braking points at Catalunya, including two zones of ultra-heavy straight-line braking, into Turns 1 and 10, were riders reduce their speed by about 120mph. At Turn 1 they go from 214mph to 62mph in 285 metres! Lorenzo’s winning advantage was gained via a few hundredths of a second during each braking zone; hardly a blink of the eye, but after 24 laps the improvements added up to a 4.5sec victory over Marc Márquez, who risked everything to stay with him.

In fact it’s not only Lorenzo’s braking that’s been improved by his ability to brace himself better during braking, because when you brake better in a straight line, you enter the corner better, turn the bike better and prepare the corner exit better, so you are faster and safer throughout the corner. Which gives you extra confidence which encourages you to push a deeper, try harder.

This is where Lorenzo is right now: he has transformed his downward vicious circle and into an upward virtuous circle.

Meanwhile, Honda’s RC213V, which was conceived to get the maximum out of Bridgestone’s front during corner entry, may have a problem, now that Lorenzo has upped the ante. While Lorenzo raced to victory on Sunday with a soft/soft combination, Márquez went with a hard front, while fellow RC213V rider chose the medium, after a few scares with the hard during practice.

“As soon as we touch the brake we are locking the front at 345kph (214mph),” said Crutchlow on Saturday afternoon. “It’s a scary, scary thing, so we need to play with the lever all the way into the corner. The Honda is amazing in braking, so we have to take advantage of that, but we have to use either of the harder front options and even then we sometimes crash because we brake so hard that we overheat the front and it doesn’t hold out.”

Of course, riding technique is only part of this conundrum; bike set-up is also vital. Espargaró again…

The Red Bull Ring is basically a Ducati drag strip.

“Last year, at tracks like Austria and Austin we locked the front during straight braking if we didn’t have a good front-end set-up to help the front tyre. Sometimes it’s difficult to understand whether you aren’t putting enough weight on the tyre or whether you are collapsing the tyre, because the result can feel the same. Sometimes I tell my engineers that we are collapsing the front tyre on the brakes because the bike is moving so much. But after a lot of analysis we realise that we aren’t putting enough pressure on the tyre to help it grip, so it’s not easy to understand!”

Neither is it easy to predict Lorenzo’s chances of continuing his recent form and challenging for the 2018 world championship. He is currently 49 points behind Márquez, having taken 30 points out of the championship leader in the last two races, with a maximum of 300 points up for grabs at the remaining 12 races.

MotoGP now goes to Assen, where Lorenzo has only won once, way back in 2010, and he will surely struggle to match Márquez’s anti-clockwise genius at the Sachsenring, but he goes well at Brno and the Red Bull Ring is basically a Ducati drag strip.

It’s impossible to even begin to guess the final championship outcome but there is no doubt that Lorenzo does have a title chance, however small it might seem right now.