There’s very little all the factories agree on, but engine rotation is one of them 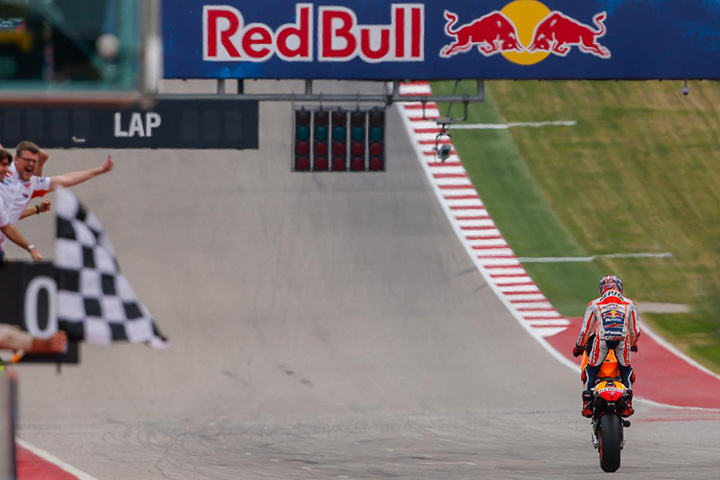 After sunshine, rain and fresh air, my favourite natural phenomenon is gyroscopic effect. This is because we wouldn’t be able to ride motorcycles without it. If you don’t believe me, try this next time you’re out riding: when you stop at a traffic light, don’t put your feet down. (And don’t send me the bill.) A motorcycle’s spinning wheels create gyroscopic effect that keeps the machine going straight. The more speed, the more gyro and the more stability. This is all good, unless you are racing. Most racers don’t give a hoot about straight-line stability: they’re happy to hold on like gorillas on the straights, just so long as the bike will turn left or right in the blink of an eye. And this is why all premier-class Grand Prix manufacturers – possibly for the first time in history – now run their engines backwards. It may also explain why Marc Márquez’s COTA and Argentina victories were so huge – bigger than any dry-track wins from last year. 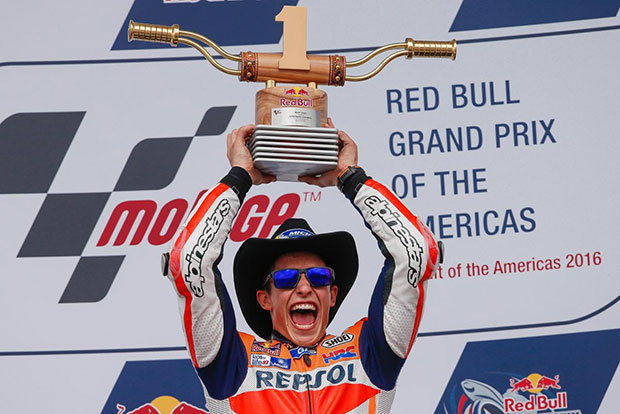 When an engine runs forward (like most streetbikes) its crankshaft rotates the same way as the wheels, thus adding to the gyro effect, which makes it more difficult to turn into a corner or change direction. The obvious way to reduce gyro effect is to reverse the direction of engine rotation, so the reverse-rotating crank reduces the total gyro effect created by the fast-spinning wheels. The beneficial effects on the dynamics of a motorcycle are significant: the bike will turn quicker and change direction faster; a huge consideration in modern racing when most racetracks are very tight and twisty. A reverse-rotating engine also reduces wheelies, because the crank’s torque reaction pushes the front wheel down during acceleration, rather than lifting it (although this is less important than in the days of two-strokes, when crankshaft inertia was greater.) However, nothing is for free in racing. If you run the engine backwards the engine needs an extra jackshaft to keep the rear wheel turning the right way. That shaft absorbs a significant amount of horsepower, as well as increasing engine weight and dimensions. In theory, a reverse-rotating crank also increases understeer in corners, making the bike run wide on the exit, which can prevent the rider from getting on the throttle. But presumably all these costs are worthwhile because this year Honda reversed the engine rotation of their RC213V, the first time they’ve run an engine backwards since the days of the 500s. The last time Honda went backwards was in 1987. The first NSR500, born in 1984, was a real handful, partly because its V4 two-stroke engine ran forwards. The torque reaction from the forward-rotating crankshaft lifted the front during acceleration, causing plenty of problems for riders who spent too much time fighting wheelies instead of thinking about the next corner. The NSR ran backwards from 1987 and won eight of the last 13 500cc titles. 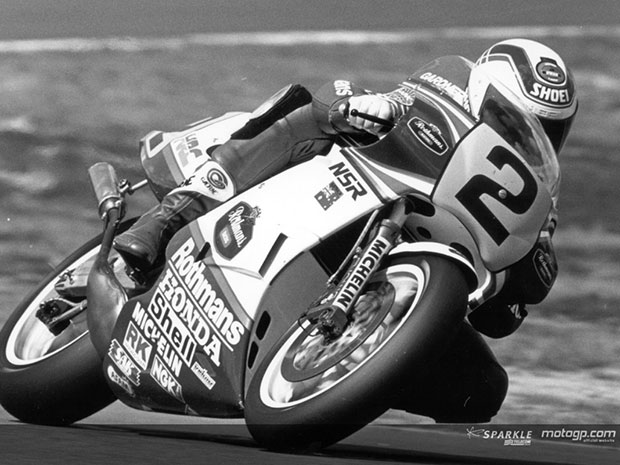 The current question, of course, is how much HRC’s change of heart contributed to Márquez’s runaway victories in Argentina and Texas: seven seconds and eight seconds respectively (at least until he eased off on the last lap at COTA). The new engine certainly helped, but most of all it was the man’s jaw-dropping talent and his chameleon-like ability to adapt to new technology. At the last two races the 23-year-old danced around his RCV, mastering the tricky Michelin front, locking and then unlocking the tyre, tucking and untucking the tyre, with reactions that can only be described as superhuman. And Márquez achieved those devastating successes despite that extra jackshaft that costs the RCV perhaps seven or eight horsepower, which is one reason why the bike is no longer an M1-munching missile on the straights. COTA is especially famous for its dizzying, snakelike sequence of corners that start each lap: left/right/left/right/left/right/left/right/left from turns one to nine in just 30 seconds. Surely, the RCV’s backward-spinning crank helped Márquez flip/flop/flip/flop/flip/flop/flip/flop/flip through there like he had never done before. But one of the coolest things about bike racing is that racetrack reality doesn’t always fit scientific theory. All too often engineers crunch the numbers, only for the rider to return to the pits and tell them that real life doesn’t correspond to the computer’s way of seeing things. Thus the reverse-crank RCV helped Márquez but not quite how his HRC engineers has expected. “Last year could I could turn quicker, but now I need to go wider and come back, so I change my riding style a little,” he said at COTA. “Now I must use a riding style more like the Yamaha style: going into corners wider and preparing well the exit from the tight corners. Using this line: going wider and coming back, we lose less and on the change of direction the bike seems slightly better. Last year we were faster to change direction, now we’re a bit slower, but we can keep more speed. I don’t know, it’s strange, but it’s the character of the engine.” 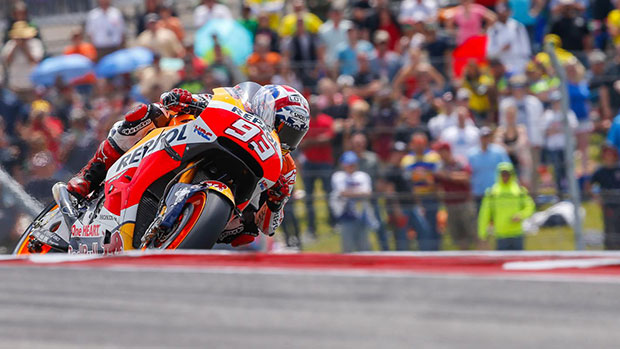 Damn right it’s strange: so the backward-crank makes him turn slower but he’s faster. What Márquez means, of course, is that instead of stopping and starting and pointing and squirting through the turns, he is using more arcing lines, which allow higher corner speeds. It’s just another way of going about a lap time. Last year Honda were in all kinds of trouble with their engine/chassis package – the engine would spin up too fast during acceleration and lock up on deceleration, possibly due to an over-light crankshaft, created in the hunt for more peak power. Reversing the engine also helps here because crankshaft weight has less effect on the dynamics, so HRC can use a heavier crank for friendlier throttle response, just as they did with the NSR500 and RC45. Unusually, HRC is one of the last manufacturers to use a reverse-rotating engine in MotoGP, because it’s always keen on being first and it doesn’t like copying. But these days, more than ever, all that matters is winning, so to hell with long-held beliefs and traditions. Suzuki and Yamaha have run their MotoGP engines backwards for many years, but the other manufacturers are more recent converts. Crucially, Ducati rotated the Desmosedici backwards for the first time in last year’s GP15, the bike that Gigi Dall’Igna built. Overnight the Desmosedici’s turning nightmares disappeared. Ducati racer and test rider Michele Pirro experienced the night-and-day change between the GP14 to the GP15. “Manoeuvrability is better and agility from one side to the other side is also better,” said Pirro. Like Márquez’s comments about the new RCV being slower but faster, Pirro’s comments about understeer also fly in the face of the engineers. “Turning into the corners is much better because the bike doesn’t push the front a lot, and there is no more understeer than before,” added the Italian. Also the crank’s torque reaction reduces wheelie, which is important because every year we have more power and this year we have less wheelie control with the control software.” From the Archive: “All arms and elbows” by Mat Oxley (February 2014) Aprilia also went backwards this season to go forwards. Last year Aprilia chief Romano Albesiano started designing Aprilia’s first fully prototype MotoGP engine, to replace the RSV4 street engine, which they had used since the CRT days. He started with a forward-rotating engine like the RSV4 and then halfway through the design process he reversed the engine. This isn’t a simple job: you don’t just change the crank; much of the engine needs redesigning, including the crankcases and the oil pump, because a reverse crank affects oil distribution in a wholly different way. This is why the new Aprilia hit the track so late. So now that Honda and Aprilia have gone backwards, we have a full grid of reverse-rotating MotoGP bikes. So it doesn’t really matter whether or not rider comments concur with the engineer’s homework, because if all the factories agree, surely there must be some truth to what they are doing? Then again, there are some learned mechanics in the paddock who believe it doesn’t really matter which way an engine rotates. They insist that the pros and cons of each direction cancel each other out. They also suggest that such changes are just what companies do, because companies like to make new stuff and engineers like come up with new ideas to keep their jobs. After all, if the tech geeks at Microsoft decided that Windows 10.2 was perfect, there would be no need for a Windows 11, so they’d all have to sack themselves and get a job at Starbucks. But I think that if all the factories agree on something, there’s got to be something to it.