Rossi’s third-place finish in Qatar suggested he has fixed the front-end problem that haunted him during testing. Or was the result just a desert mirage? 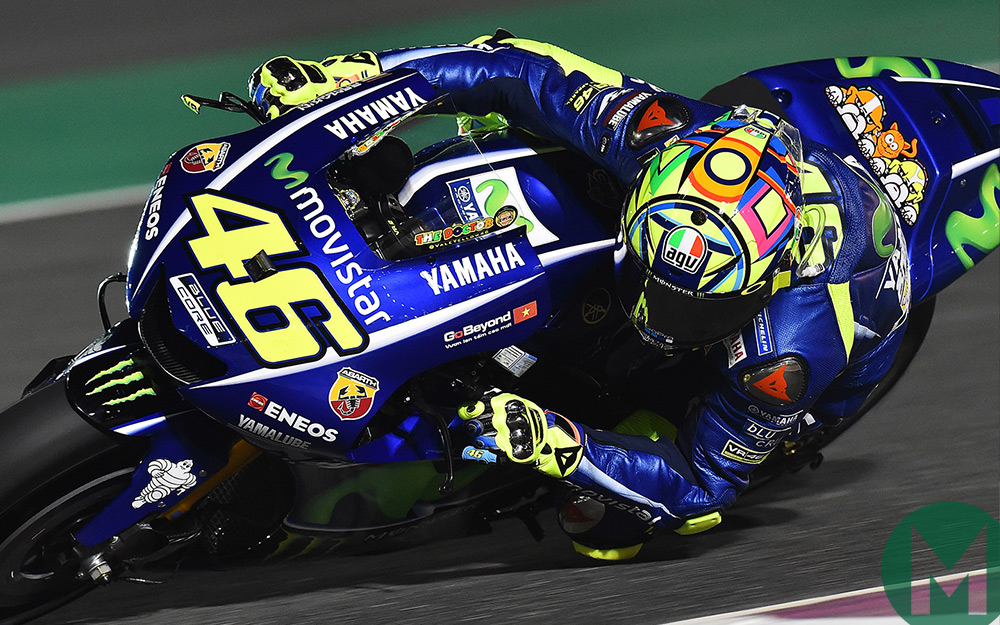 Despite the lack of a refreshing gulp of Cava, no man on the Qatar GP podium was happier than Valentino Rossi. Maverick Viñales and Andrea Dovizioso had fully expected to be there, but not MotoGP’s ageing veteran. A miserable pre-season test programme followed by a lowly 10th place in practice had some people muttering in Losail’s pit lane: is this the beginning of the end?

Of course it wasn’t.

But does this mean he has fixed his front-end problem or was the result a factor of Losail, MotoGP’s most slippery track, which can prevent riders with better set-ups from exploiting their full potential?

After the race Rossi hinted he had made a settings breakthrough during practice but wouldn’t reveal specifics. However, key members of his crew aren’t so sure and are still wracking their brains to fix his front-end woes.

Rossi’s concern is adapting his bike and riding technique to Michelin’s 2017 front slick, which features a larger profile for more mid-corner grip, the lack of which was the downfall of many riders last year. Michelin made a prototype 2017 front available at last November’s Valencia GP. Most riders raced with the tyre because they liked the extra grip, even though its more rigid construction caused some chatter.

Over the winter Michelin combined the 2017 profile with the 2016 carcass to create a front with more grip and less chatter. Everyone prefers this tyre, except Rossi.

Michelin insists the tyre’s construction is no softer than last year’s but some within Rossi’s crew aren’t so sure. They believe its carcass compresses and deflects too much under load, so when Rossi tries to do what he likes to do, which is brake deep into the corner rather than gently trail-braking, the tyre squishes and won’t support him, so he loses his line. 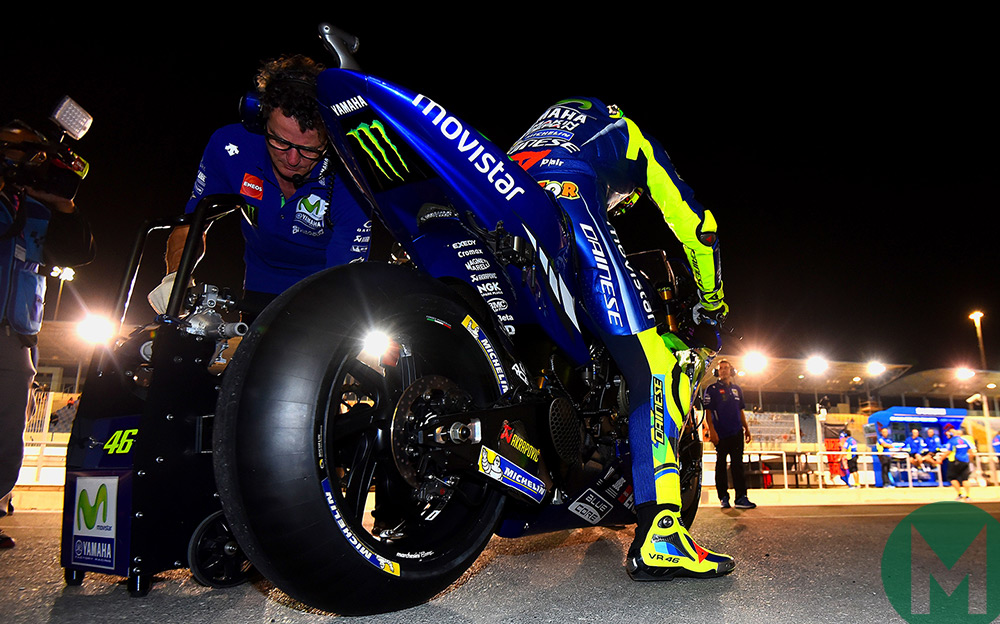 This isn’t Michelin’s fault; it is the reality of control-tyre regulations: the tyre manufacturer must build tyres that work for the majority, not for individuals. It’s pot luck: sometimes a control tyre suits you, sometimes it doesn’t. Rossi was in luck last year; this year he may be out of luck.

“It is difficult to assess Valentino’s issue in Qatar,” explains Michelin’s technical director Nicolas Goubert. “The problem there is that the track keeps changing, so one session he had a good feeling with the tyre and the next session it might be bad again.” In other words, Qatar isn’t always a good form guide.

Rossi’s crew chief Silvano Galbusera has been working at reducing his rider’s front-tyre squish since they first used the 2017 front at Sepang in late January.

“Valentino is not so bad braking in a straight line and he’s not bad at full lean, the problem is the transition between the two,” said Galbusera, speaking on Saturday night in Qatar. “The problem is that everything you do to avoid this problem loses you performance. You can try to take some weight off the tyre with different bike balance or slightly softer front suspension, but then you are slow, this is the problem. At the moment Valentino has lost confidence going into the corner in his usual way. And if you are slow in the corner, then you must open the throttle more on the exit, so you get more wheelspin, so you are in a circle.”

Mike Norton, Rossi’s Öhlins suspension technician for more than a decade, has also been working hard to help Rossi escape this vicious circle.

“It’s difficult to take weight off the front with the suspension,” said Norton, speaking a few hours before the Qatar race. “We can change preload to change the engagement point of the spring and we can change the spring rate to give the tyre an easier time, but it’s usually more successful to take load off the tyre with different geometry.

“A rider needs to have the front with him to go fast and Valentino doesn’t have the front at the moment. He’s had to accept that everything we’ve done hasn’t really solved the problem, so now he’s having to adapt his style.

“Valentino’s experience is perhaps working against him at moment. He will have to adapt during the race when he sees what other people are doing. Then maybe he will figure out how to balance the package himself, because he’s a big, gangly bloke. Then again, being big and gangly can be a disadvantage, because he sometimes overloads the front.

“I think after 15 laps or so tonight we may see the true picture. Many guys are fast for five laps in practice, but in the race they may struggle because you can’t load the front tyre that much for that long.” 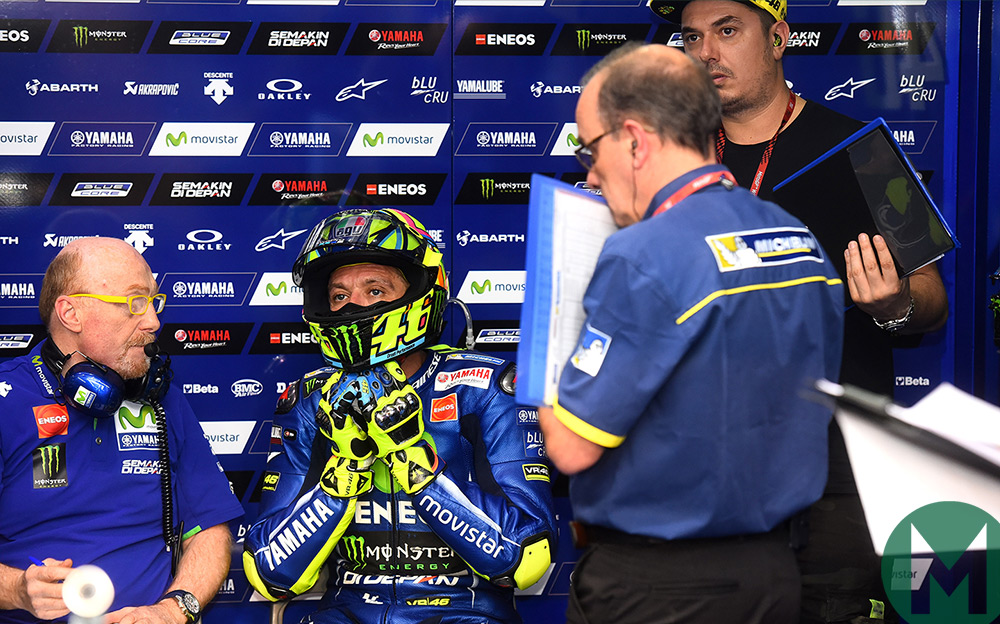 Norton was right, of course. Rossi adapted brilliantly in the race. His average lap time was only nine hundredths of second slower than the winner’s, a vast improvement from practice.

But one podium doesn’t make a summer. It’s certainly too soon to tell what’s really going on. Grip at Termas de Rio Hondo this weekend may also be sketchy, then MotoGP travels to COTA, which has never been kind to Yamaha, so it will most likely be several more races before we know whether Rossi, Galbusera and Norton have escaped the curse of front-tyre squish and low corner-entry speed. This is both a matter of machine and rider; in others words, Rossi must reinvent himself once again if he is to challenge for the 2017 title.