Austrian factory KTM chose a unique path when it entered MotoGP three years ago, so will the RC16’s differences help it succeed or make it fail? 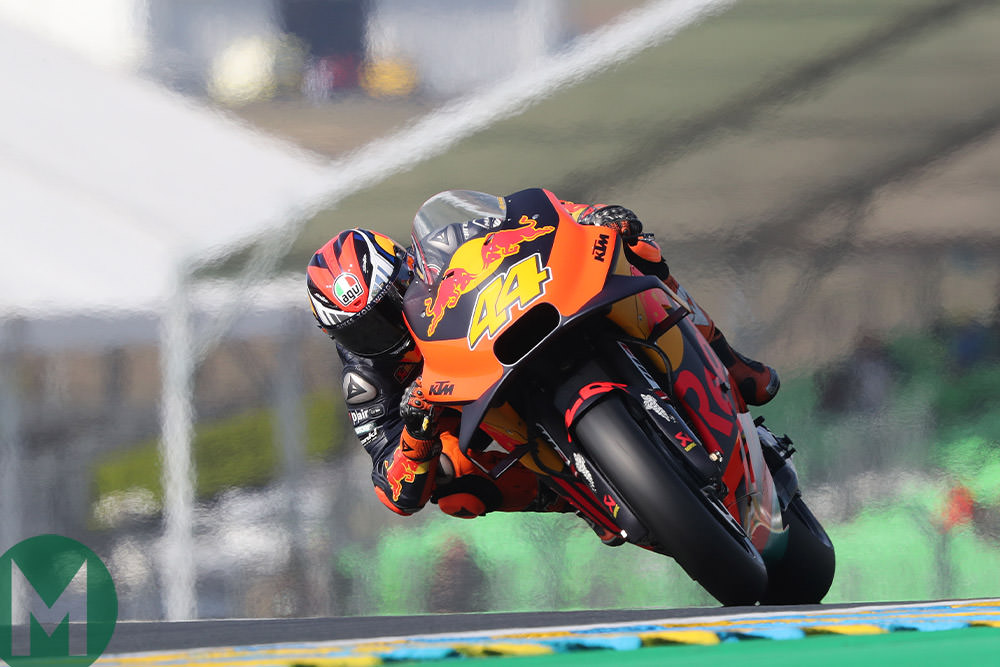 Two weeks is a long time in MotoGP. Sunday night at Jerez wasn’t a good time to hang around outside the Red Bull KTM garage. The factory had had a horrible weekend, its fastest rider finishing 20 seconds behind the race winner and its prize signing throwing his toys out of the pram in front of a TV crew.

The Jerez sufferings of Pol Espargaró and Johann Zarco made headlines – many of which insisted that KTM’s three-year-old MotoGP project is doomed to failure until the factory bins the RC16’s tubular-steel frame and its WP suspension.

Then everything changed at Le Mans, for Espargaró at least. He finished sixth, KTM’s best dry-weather result. In fact finishing positions don’t matter too much at this stage of a project; what does count the gap to the winner, the only realistic judge of progress. Espargaró crossed the line just 5.9sec behind Marc Márquez, a difference of 0.2 seconds a lap, compared to a 0.8sec deficit at Jerez.

There were several reasons for Espargaró’s dramatic improvement. Firstly and secondly, the rider and the track. The former Moto2 world champion is a super-aggressive rider who needs a lot of grip to go fast. And Le Mans is the kind of track that needs to be attacked aggressively and the asphalt is very grippy. Thirdly, His RC16 used a brand-new carbon-fibre swingarm, which KTM had tested in secret the previous Wednesday at Jerez. 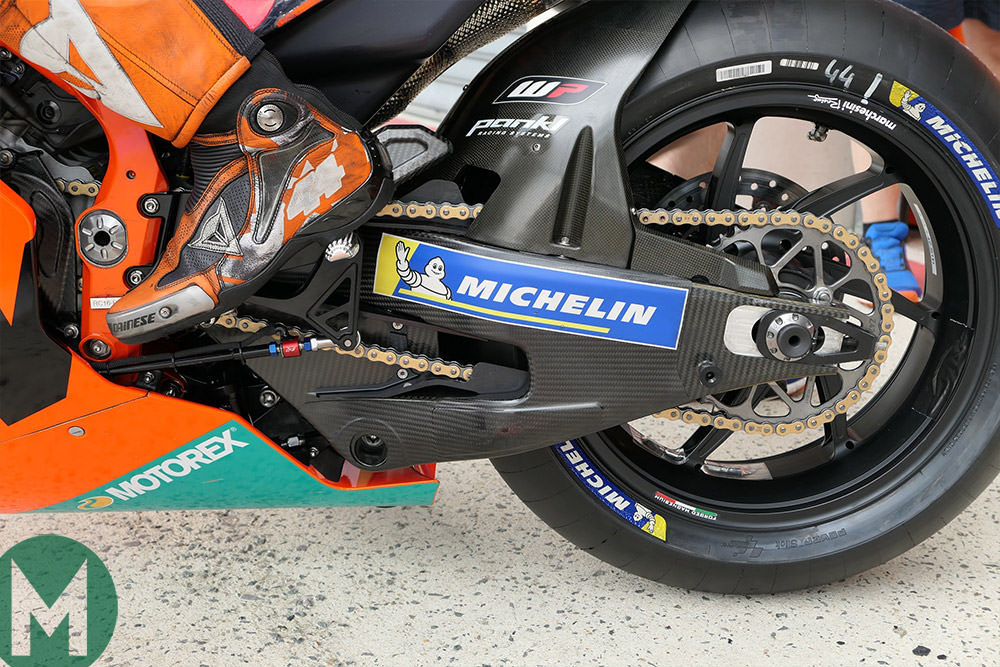 “At the tests Pol said, bloody hell, I need this for the next race, if I can have it,” says his crew chief Paul Trevathan. “For Pol it’s all about traction and consistency of lap times. He can always drag the bike around for a lap time, but when he goes into a race, when there’s a bit less grip [most likely due to Moto2 rubber on the track], he struggles a bit more. Now we’ve found something that allows him to do the lap time and stay on that lap time, because if he loses grip and edge grip he can find another way to make the lap time.”

KTM is the third factory to use a carbon-fibre swingarm, after Ducati and Honda, so where is the magic in this component?

Carbon-fibre is the perfect material for racing. It’s light and it’s strong, but most significantly for motorcycle racing its flex character can be tuned more accurately than any metal. Different fibre weaves can be used and laid-up differently to create an exact mix of longitudinal, torsional and lateral flex. This should deliver some softness for the best edge grip through the corner and the best drive grip out of the corner, plus excellent rigidity for braking stability and rapid changes of direction.

The new swingarm probably gives less lateral stiffness and more torsional stiffness to help the rear tyre find more grip, to look after the tyre and to improve the rider’s feel for the tyre.

“It gives a good feeling with used tyres, so even when the tyre is spinning I can do consistent lap times,” says Espargaró. “And it stops the tyre spinning earlier, so when I pick up the bike out of the corner I’m going faster.”

The question of flex also applies to the RC16’s steel-trellis frame, which stands alone on a grid dominated by more conventional aluminium beam frames. Since the Austrian factory first arrived in MotoGP in 2017 there have been many paddock doomsayers loudly proclaiming that this heresy will not succeed and that KTM must repent its ways and embrace orthodox chassis design if it’s to win races.

Really? Chassis design is essentially just numbers: geometry, centre of mass, longitudinal stiffness, torsional stiffness, lateral stiffness, twist points and so on. A good team of engineers should be able to apply these numbers whatever material they use.

However, there are other challenges along the path that KTM has chosen.

Steel and aluminium flex and reflex in different ways because steel is much stiffer than aluminium. In fact its tensile strength is almost three-times more: 210,000 megapascals to 85,000 megapascals. Therefore if you increase or decrease wall thickness by half a millimetre you get almost three times the effect, so you must be much more accurate in everything you do if you don’t want to spoil feel and performance.

KTM’s frame may look relatively simple from the outside but it’s anything but simple on the inside – tailored chrome molybdenum tubing with different shapes, different thicknesses and even conical insides to tune flex and flex points. Therefore there’s no reason KTM shouldn’t be able to find the right numbers, given the time and money.

It’s important to remember is that this is KTM’s third season in MotoGP, whereas Yamaha is contesting its 47th premier-class campaign, while Honda and Suzuki are in their 42nd seasons. Ducati has been in MotoGP for 16 years, joining the class after 15 years at the front of World Superbike.

There are other potential complications on KTM’s chosen path. A steel frame consists of more parts, all welded together, and each part and each weld can introduce tiny differences that may affect feel and performance. Once again, the design and production process must be 100 per cent perfect to avoid these pitfalls.

KTM’s final act of heresy is the RC16’s WP suspension, while everyone else uses Öhlins. This a commercial decision, because KTM owns WP, just as the RC16 frame is a commercial decision, because KTM sells road bikes and dirt bikes with trellis frames. Once again, there’s no reason WP won’t get there, but it will take time, because its engineers have a fraction of the data that Öhlins has amassed since it came to roadracing GPs in 1983 to sort out ‘King’ Kenny Roberts evil-handling Yamaha 0W70.

“The concept of this project is to make a MotoGP bike with the same technology we sell at KTM – our customers buy KTMs with steel frames and WP suspension,” says team manager Mike Leitner. “Maybe we could take a shortcut if we went to a suspension manufacturer that’s been here for many years, but the nice thing for us is that this is our technology and we are getting better and better. When I compare the suspension we used at the start of this project to what we have now – wow, it’s a big, big step!” 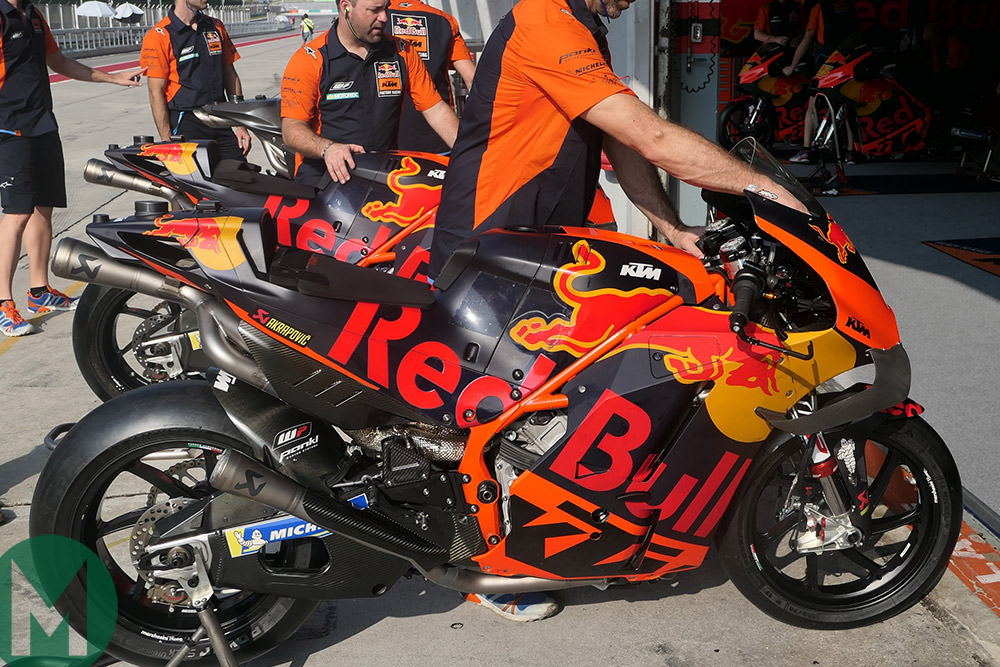 Apart from the scientific differences of KTM’s frame and suspension, there’s also the question of rider psychology. Motorcycle racing is more about feel than car racing – it’s kind of more analogue than digital – so riders need to feel confidence in their machinery. And if they are using different equipment to what the winners are using there’s a tendency for them to attribute any shortcoming to that difference, rather than to their riding. This is something else KTM must deal with.

“We need time,” adds Leitner. “None of this is something you learn overnight. We have to work step by step, always working to make a better bike to get our lap times closer to the top guys. In 2017 we were happy to get championship points. Last year we got a few top tens. This year we qualified on the second row for the first time at COTA and here at Le Mans we finished sixth in the dry, so why should I listen to people who say, hey, the steel chassis is no good? Of course we will succeed, but no one will help us, we have to do it all ourselves.”

Espargaró’s superb Le Mans result was a huge day for KTM. But what about Zarco? While Espargaró was just two tenths a lap slower than Márquez, Zarco finished his home GP 33 seconds behind the winner, a deficit of 1.2 seconds per lap, slightly worse than his pace at Jerez.

The Frenchman’s main problem is that he came from Yamaha’s YZR-M1, a friendly bike that suited his smooth, corner-speed technique. Espargaró also came from Yamaha, but the Spaniard never really liked the YZR-M1 because it didn’t work with his muscular, give-gas technique. The RC16 is more aggressive and more nervous, like Honda’s RC213V’s, so it needs to be used more like an axe than a rapier: flick it in and fire it out.

“Johann came from a bike with a completely different DNA to our bike,” says Leitner. “He has an understanding of the bike he wants, but we cannot magic that bike from nothing. He’s a smart guy and now he understands he must bring something to the project.”

Trevathan agrees. “I’m sure that if we can help Pol we can help Johann,” he says. “It’s all about how much he comes our way and how much we can go his way, then we can meet in the middle.”

Next month marks the next important step for KTM. Long-time Honda rider Dani Pedrosa will commence his testing programme with the RC16, having recovered from collarbone surgery.

“What I really like about Dani testing our bike is that until now we’ve always had MotoGP riders coming from riding Yamahas with inline engines,” says Leitner. “Dani rode bikes with V4 engines for many years, so I think he will be able to help us understand many things.”