Jonathan Rea gave himself and Kawasaki a huge boost when he outpaced half the MotoGP grid at Jerez last week, but how was it possible? 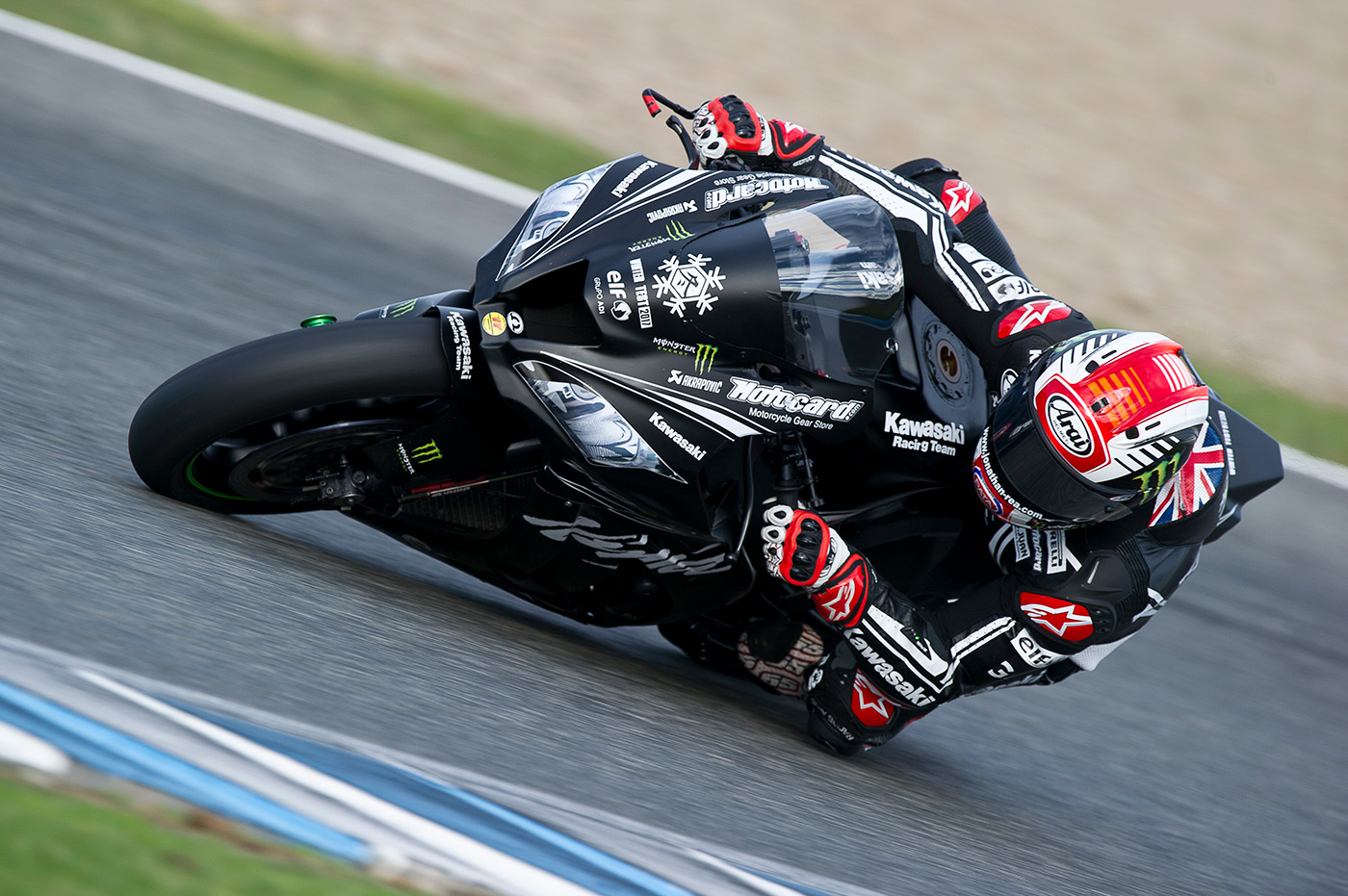 Racers love to prove a point. It goes back to the all-important F**K YOU! department in their brains I mentioned a couple of weeks back.

Which is why November’s combined MotoGP/World Superbike tests at Jerez have become a big deal for top WSB riders.

Many World Superbike riders believe their talents are overlooked and underestimated because they race far away from MotoGP’s all-consuming limelight. And they’re not wrong. WSB’s TV audience is roughly 10 per cent of MotoGP’s. This explains why WSB’s top men spent some of their time at Jerez riding the outer limits to make the 14 MotoGP riders present look a bit silly.

Twice World Superbike champ Jonathan Rea was the star of the show and flew home with a big grin on his face after outpacing half the MotoGP grid (albeit mostly the back half).

His astonishing 1m 38.721sec lap on his factory ZX-10R would’ve put him on pole at last May’s Spanish Grand Prix, 0.015 seconds ahead of Valentino Rossi, 0.137 seconds in front of Jorge Lorenzo and 0.170 seconds ahead of Marc Marquez. 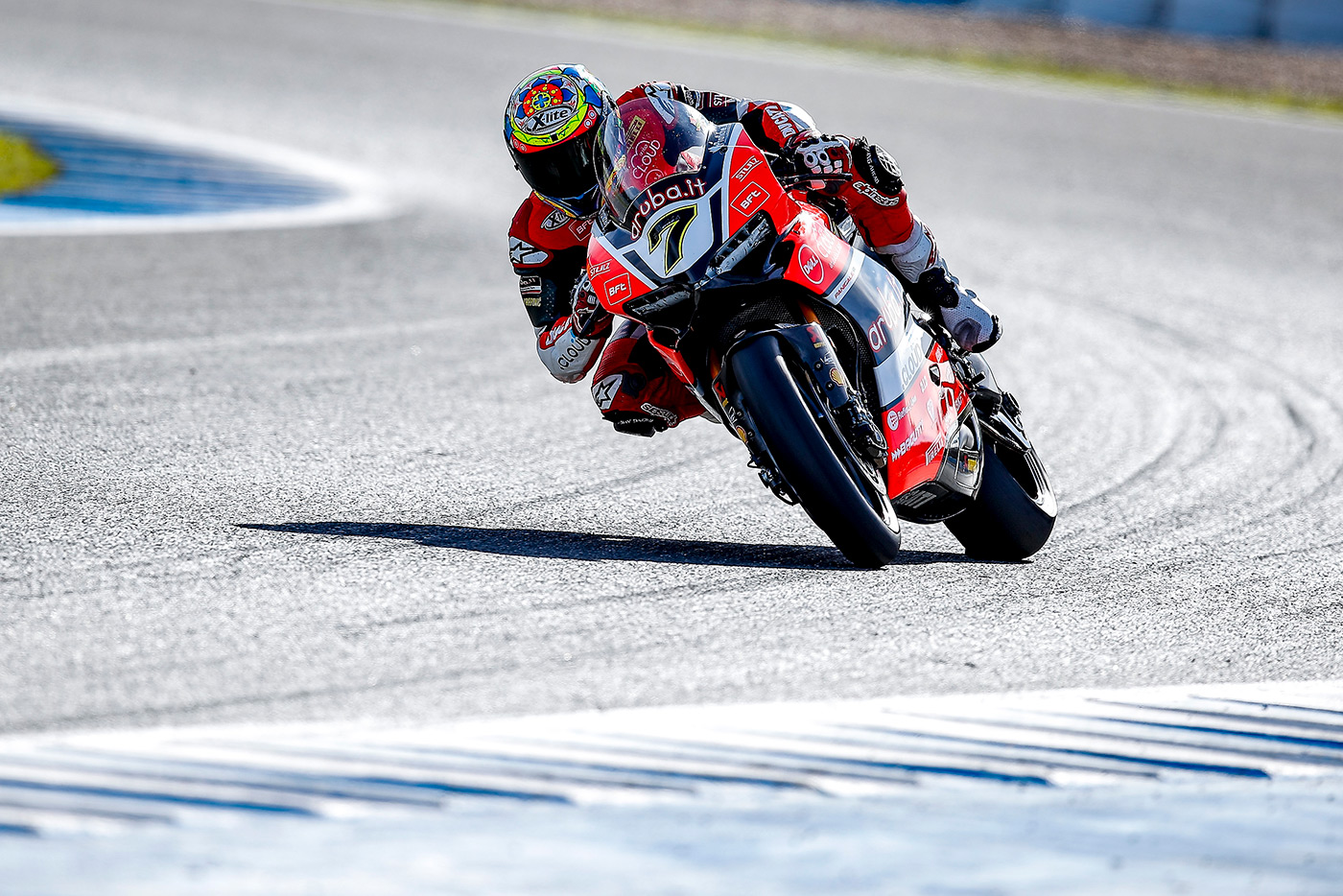 How is this possible? How can anyone on a trick road bike go faster around a racetrack than the three men presumed to be the world’s best on hand-crafted MotoGP prototypes?

Firstly, this is nothing new. In 2002 the late, great Steve Hislop bettered Valentino Rossi’s pole time at the British GP, making a BSB Ducati 996 faster than a factory Repsol Honda RC211V.

Here’s why such things can happen…

Racing is all about grip. And the more horsepower you have, the less power matters and more grip matters, because it’s all about getting that power to the ground. This becomes apparent if we compare lap times at actual MotoGP and WSB events at Jerez.

The WSB lap record (fastest race lap) stands at 1m 41.135sec, established by Rea in 2015. The MotoGP record stands at 1m 38.735sec, recorded by Lorenzo in the same year; which makes WSB 2.4 seconds slower than MotoGP.

The gap shrank dramatically due to a change of tyres and subsequent reduced grip. At the 2016 Jerez GP Michelin supplied extra-hard rears, after Scott Redding had delaminated a tyre in Argentina. The Jerez tyre caused wheelspin, even in a straight-line in fifth gear. Hence the race was 31 seconds slower than the 2015 Jerez GP.

Track temperature also plays a part because Jerez offers much less grip in the heat, which is why winter testing times at the track are always impressive. At the 2016 Jerez GP track temperature was 40 degrees, compared to 35 degrees at WSB 2016 and 30 degrees at MotoGP 2015. 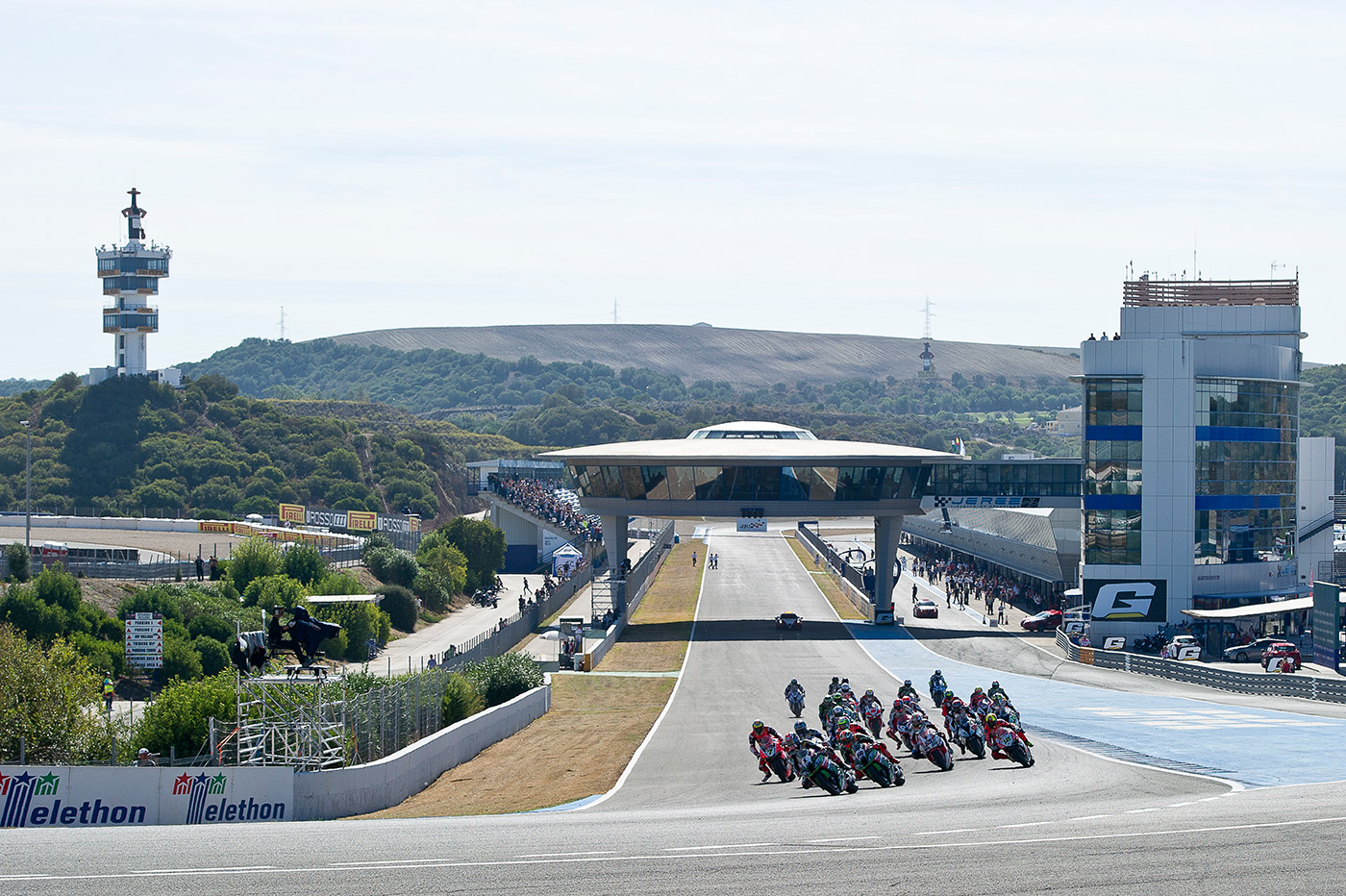 But superbikes do have good things going for them. The second most important factor in bike racing is feel, and a softer superbike gives more feel than an ultra-stiff MotoGP bike.

“A superbike is so forgiving,” says Aprilia MotoGP rider Sam Lowes, whose brother Alex rode both WSB and MotoGP during 2016. “When you’ve got that feeling, feedback and forgiveness you get so much confidence that you feel like you can nearly crash and it’s okay, but when you’re on a stiff MotoGP bike you feel good, good, good, then crash… and you’ve no idea why.”

That begs the question: why bother creating expensive prototype race bikes? A hard one to answer, except to say that MotoGP bikes can do astonishing things given the grip they deserve and, also, wouldn’t it be a tragedy if all bike racing was limited to street bikes?

Machine performance in both championships has been hit by cost-cutting regulations, but MotoGP has been hit hardest. The old 500cc two-strokes weighed 40 kilos less than a superbike; now the difference is 11 kilos due to MotoGP’s sky-high minimum weight limit. And WSB bikes now have more sophisticated electronics, following MotoGP’s introduction of unified software.

And then there are the riders. Rea is very talented and highly motivated. In 2012 he subbed for Casey Stoner at Repsol Honda, scoring a seventh place at Aragon and an eighth at Misano. He worked at the job in his usual professional manner, but didn’t ignite enough interest from top teams. 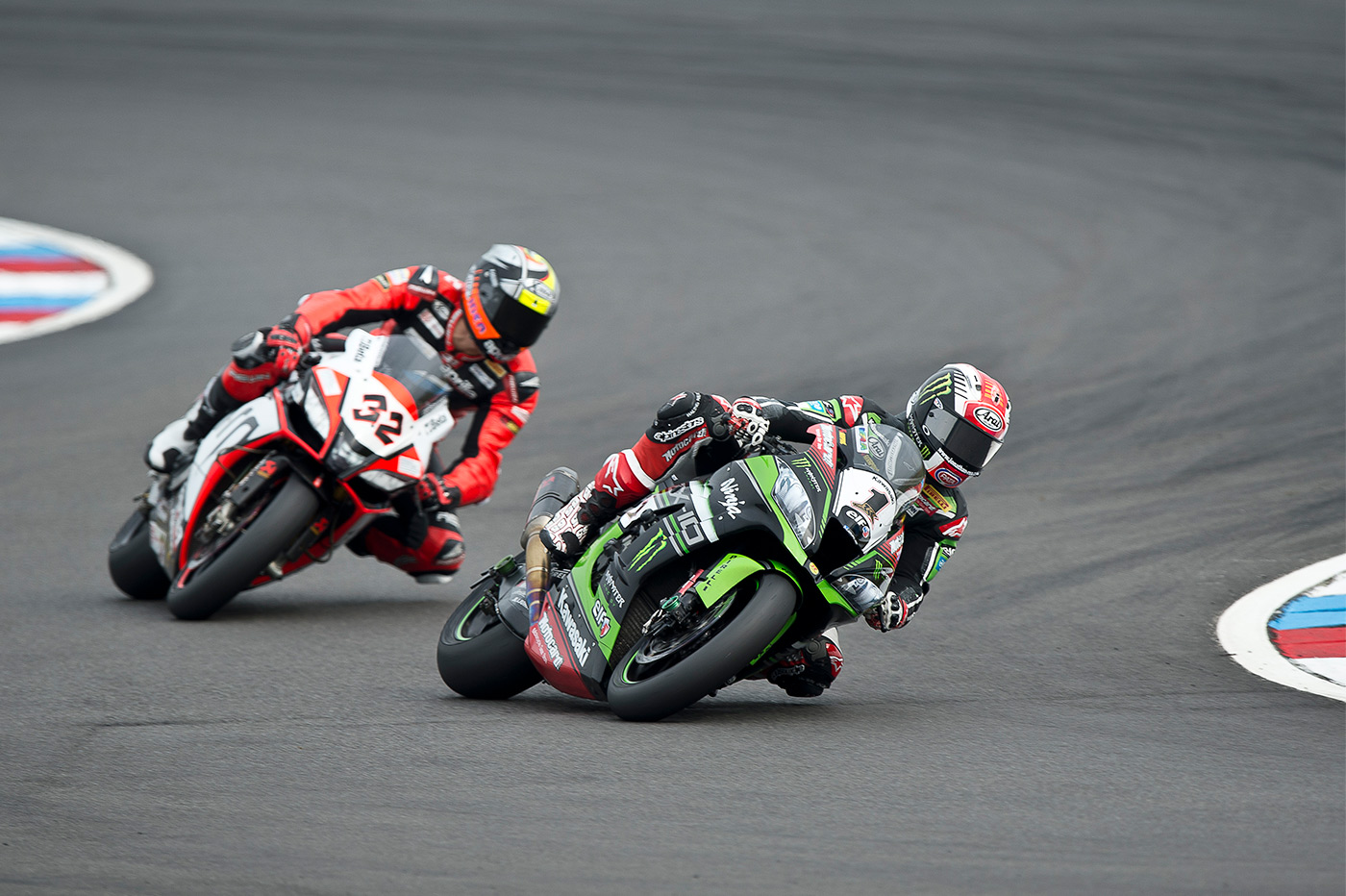 There’s little doubt that Rea, Davies and Sykes could fight for MotoGP podiums on the right bike. But getting the right bike is another matter. Most factory contracts go to Spaniards and Italians, because these countries are MotoGP’s heartlands. That’s just the way it is, but it wasn’t always thus. During the 1950s, 1960s and into the 1970s, many factory rides went to Britons, who were employed by British brands, then Italians and Japanese. In the 1980s and 1990s the factories wanted American and Australian riders. Times keep changing.

Rea, Davies and Sykes could have a MotoGP ride if they wanted. But switching championships is risky. They would have to start on non-factory bikes, as did Baz, Cal Crutchlow, Neil Hodgson, James Toseland, Danilo Petrucci and others.

Crutchlow won three WSB races in his rookie season; it took him six years to win his first MotoGP race, during which time his ride was in jeopardy on various occasions. And he still hasn’t got a factory bike.

Petrucci switched from WSB’s Superstock series to MotoGP in 2012, riding the slowest bike on the grid. For three years he finished mostly at the back and became so miserable he nearly quit racing. Next season, his seventh in the category, he will ride a top-spec bike for the first time.

Meanwhile Rea, Davies, Sykes and others know they can race top-notch bikes at the front of WSB and earn nice factory salaries, year after year. They have the choice to take a full-time shot at the premier class but they haven’t, and who can blame them?