Rossi and Viñales scored their best result in a year in Thailand – so will they be even faster in Japan this weekend? 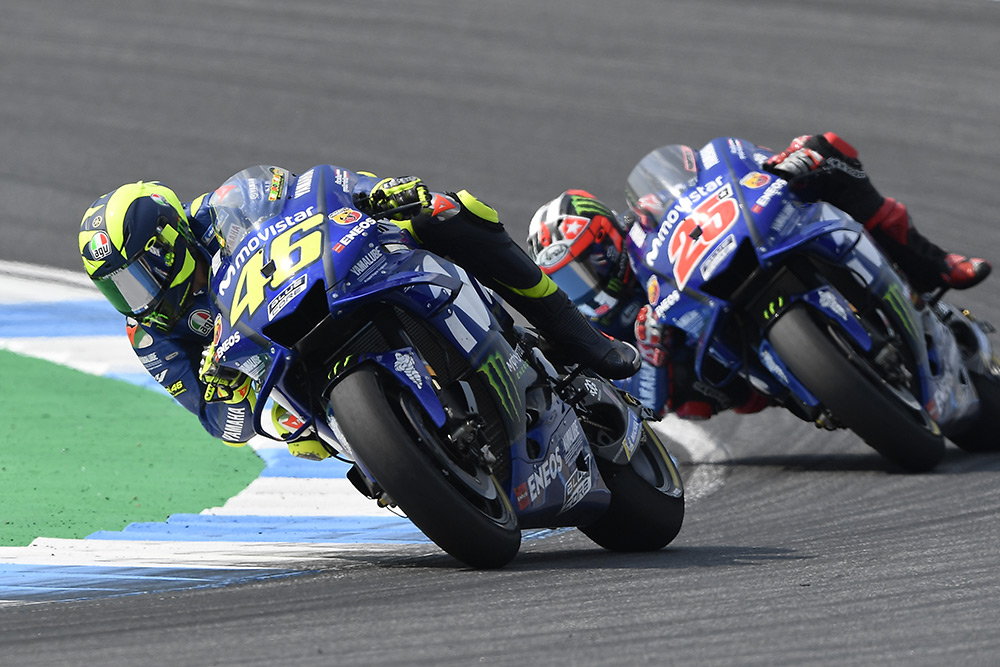 You know things are bad when a factory that once took winning for granted celebrates a third- and fourth-place finish as a ‘return to form’. That’s exactly how the Movistar Yamaha team reacted to its so-close-but-so-far result at Buriram.

Maverick Viñales finished less than three tenths of a second behind winner Marc Márquez, with Valentino Rossi just 1.2 seconds further back after very nearly ramming his team-mate at the final corner.

Remarkably, this was the closest both factory Yamahas had been to winning a race since Phillip Island, this time last year.

So was Buriram a freak result, or will Yamaha continue its return to form under the burning glare of factory bosses at Motegi this weekend?

Rossi tried to answer that question in Thailand and his prognosis was far from positive.

“I hope with all my heart that we can be strong at other tracks but unfortunately I think we are fast here because of the tyres and the track,” he said. “Now we will try at Motegi to understand if we are better, or if was just the track.”

This sounded like Rossi at his political best – he almost certainly already knew the answer to the question but was far too clever to answer it himself. One day he could make an excellent president of Italy.

But why was Yamaha so strong at Buriram after being so weak for so long?

Of course, it all comes down to tyres. Following preseason tests at MotoGP’s newest venue, Michelin constructed specific rear slicks to withstand the circuit layout and the tropical temperatures. The tyres featured a stiffer, heat-resistant carcass, which was also used at the Red Bull Ring, but with different compounds. This was the secret to Yamaha’s surprising speed.

“This weekend is also a surprise for us!” said Rossi. “After Aragon we made some small modifications, but the bike is very similar, so maybe it’s just a better marriage between the tyre, the M1 and this track.”

The Michelins are the opposite to the Bridgestones, used by MotoGP from 2009 to 2015. Whereas the Bridgestone front slick was the better Bridgestone, the Michelin rear is the better Michelin. Thus a change to the rear tyre spec made all the different to the Yamahas: not only Viñales and Rossi, but also Johann Zarco and Hafizh Syahrin, who both had their best races in several months.

The Australian GP could be their best chance. Last year both finished on the podium.

“We made some changes to the bike balance but for sure the rear tyre helped us a lot to turn,” said Viñales. “It’s quite strange because at Aragon I couldn’t lean the bike, but this weekend our strongest point was sectors two and three, where it’s all corner-speed turns and where the bike was working like a normal Yamaha.”

Thus the harder rear carcass gave the Yamahas more edge grip and better drive grip, so they could finish the corner with the throttle, which is how it’s done nowadays, albeit gently, without too much wheelspin.

This might come as a surprise to any of you that follow MotoGP closely. Back in 2016, Michelin’s first season as official tyre supplier, Jorge Lorenzo was on fire, until Michelin switched to a stiffer construction rear slick after Scott Redding delaminated a rear tyre during Argentine GP practice.

“With the first Michelins I was very quick, one second quicker than the others in preseason testing,” remembers Lorenzo. “But then they gave us harder tyres and that made me weaker.”

Does that make it confusing that Viñales and Rossi ran up front in Thailand, thanks to harder rear tyres? Not really. The Yamaha is a corner-speed bike, which needs excellent edge grip to go fast. It therefore requires just the right amount of carcass flex to make the tyre squish just the right amount to provide the optimum contact patch at full lean. So it’s quite possible for the rear tyre to be too flexible or too stiff.

What can Rossi and Viñales expect at Motegi this weekend? Honda’s home circuit doesn’t look like a Yamaha circuit because it’s dominated by stop-and-go corners that prioritise braking and acceleration performance over corner speed. And yet the YZR-M1 worked well enough at Motegi during the Bridgestone era, winning two of the last three races on the Japanese tyres. Yamaha hasn’t won there since the switch to Michelin. In fact, its last two home races have been a disaster. In last year’s rainswept Japanese GP the top Yamaha finished 29 seconds behind the winner. In 2016 the gap in the dry was 19 seconds, after both Lorenzo and Rossi had crashed out.

Even now Yamaha hasn’t been able to solve the equation of the Michelins and the unified software. The M1 was only competitive in the first few months of the Michelin/Magneti era, when it won five of the first seven races of 2016, while Ducati and Honda got up to speed with the new kit. Once Ducati and Honda found the right way, Yamaha was crushed – since the 2016 Catalan GP the Iwata manufacturer has won just five victories from 41 races.

From this year’s 14 races, Yamaha’s average losing gap is a hefty 6.8 seconds. Put in performance terms the gap looks less heavy: at less than 0.3 per cent. Yamaha is working to bridge that gap. The company’s racing department has employed more electronics staff, including Pata World Superbike data technician Michele Gada, who seems to be working part-time for the Movistar team, when he’s not busy with Michael van der Mark and Alex Lowes. Gada’s input at Pata helped transform the YZF-R1 from loser to winner, largely by improving corner exit traction, which is one of the main issues facing Rossi and Viñales.

What about the last few races of this year – will they give the 2018 M1 a final shot at redemption? Michelin also supplies special rear tyres for Phillip Island’s ultra-high-speed layout, where riders use more throttle than anywhere else, but it’s only a compound change, not a carcass change like the Buriram tyres, so we don’t know if the tyres will give Rossi and Viñales that all-important boost in corner speed. If they do, the Australian GP could be their best chance. Last year both finished on the podium, within two seconds of Márquez.

There’s one other significant factor at play here. Yamaha’s lack of competitiveness during much of this season has affected the ability of its riders to extract the maximum from their motorcycles. When the bike isn’t right, race after race, you lose the feeling required to push to the absolute maximum. Without this issue, Viñales reckoned he would’ve had a better chance of winning in Thailand.

“It’s really difficult to ride like this, going up and down, because you never have enough trust,” he said. “If our situation was different I would have had a chance to attack on the last lap, because I was right there, really close. We just need more feeling.”

Looking further ahead to next year, Yamaha will have a revised engine with more crankshaft inertia, to improve corner-exit traction. But they’ll also need to find the right path through the Magneti Marelli labyrinth. If the engineers in Iwata and at Yamaha’s European base in Milan get their sums right and close that 0.3 per cent gap, there’s no reason why Rossi and Viñales won’t be back in the title hunt in 2019.