I am going to report on the 2017 French Grand Prix at Le Mans, but I’ll get to that in just a minute because I want to talk about Nicky Hayden.

As some or most of you probably know, he was involved in a tragic bicycle accident, where he was on his bicycle and got hit by a car last Wednesday. He was hanging on and trying to survive since then. Unfortunately he succumbed to those injuries yesterday and he lost his life. As a racer, we realise what we face on the track every time we get on it. It is part of what we do and we accept that and for many people in many types of lives and jobs that they choose to do. But what makes this shocking is that it wasn’t on the racetrack and he was in the prime of his life after so many years of racing. Not only the way he raced, but the way in which he conducted himself.

I want to tell you just a little bit about how I met Nicky. I met Nicky in the early ‘90s at a little racetrack near my hometown of Shreveport, Louisiana in a little town – not even really a little town, but a small little place – called Henderson in East Texas. There was a track called Oak Hill Raceway that actually opened in 1974 and I raced there a lot when I was a kid.

I was over there one day just visiting and I had some time off and a man walked up to me and put out his hand, I’ll never forget it, in that Kentucky accent and said to me “My name is Earl Hayden. I have my family over here and they’re young racers and I’d really like for you to come over and meet them.” I said “sure”, so I went over and the first thing I noticed was just the sincerity of this family, beginning with Earl. I met Nicky and his brother Tommy and one of his sisters and they were there racing. I never forget the look in their eyes – these were really young racers and you could tell that they were passionate and definitely had that competitive look. I never forgot that.

Years later, when I was working with the American Honda Team consulting, Nicky was hired. This was in the early 2000s – 2000, 2001 – and his crew chief Merlyn Plumlee and I go way back. We all worked together and working with Nicky was just a real pleasure. It wasn’t just the dedication on the track but off the track when he came to my school and the laps he would put in. But for me it was more than that – it was the way he interacted with people. He was the type of person that you could see that he was.  That was such a real pleasure, to not only work with him but to help him in any way possible. 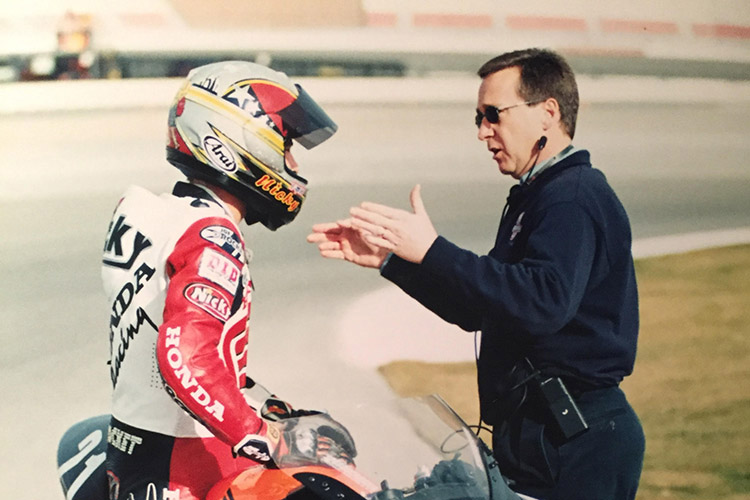 I got the opportunity to go to Japan in 2001 and Mr Ikenoya, who was in charge of the beginning of the Honda RC211V programme, the V5, asked me about Nicky because Nicky was winning the AMA Superbike Championship. He said ‘do you think he can win the world championship?’ and I said “I think he can if you build him the bike”. I’ll never forget that moment when I shook Mr Ikenoya’s hand because I believed in Nicky.

Again it was more than just what he could do on the track that mattered. Years later he won the world championship in ’06 and I saw him in Portugal in January for the Honda launch and we hugged each other. He hadn’t changed from that little boy when I met him at nine years old, and that’s what I’m proud of him for – not what he did on track, but for the way he carried himself and didn’t change.

You know, in the world that we live in, when you leave your environment – I left Louisiana and Nicky left Kentucky – and you leave that comfort of the family and you go out into the world, it’s not easy – but he did it. He never changed and he always did the best he could. For that I’m very proud of him. He is going to be missed, so to all the family, Earl and Rose, and the family, we’re all thinking of you.

The Grand Prix this weekend was always going to be interesting. The Bugatti Circuit is one of incredible tradition and as a racer that is something that you like to be a part of. Again it’s not just what we do on the racetrack, but it’s what we’re part of. As a kid growing up in Shreveport I imagined some day racing at Le Mans and I got that opportunity to race there a few times. So for the riders this weekend, that’s part of it.

With the new surface on the track taking out the bumps, it was always going to be a challenge and they ran into certain issues over the weekend with the weather problems, so it was going to be a challenge. I always say that’s when we earn our money – practice is short, we have to make decisions, we have to adapt and it was always going to be that way on Sunday. It was who could adapt to that new surface and with the limited practice time.

The Yamaha certainly seemed strong this weekend – you could see that with the front row of Viñales, Rossi and Johann Zarco. The problems that Dani Pedrosa had in practice with the inability to get some heat into the tyres when he was in the cooler conditions and the wet and dry, it looked like he was going to be struggling by Sunday, but he got through qualifying on Saturday okay. He missed out on going to Q2 so he had to start at the very back, so he was definitely one of the great stories that happened on Sunday afternoon.

But certainly the crowd favourite was Johann Zarco, in front of his home crowd. That’s always to me a good measure of a rider that has the potential to be great – how they perform in those situations when the spotlight is right on them, and you knew that was going to be the case with Johann over the weekend. The opportunity to do one in front of the French crowd and to put it together and possibly even win the race. That’s what he believed was possible.

One of his strengths is certainly his ability to get the most out of those first few laps of the race. I’ve always said that is such an important asset to have, if you can be a strong starter and get out there in that lead group, or more importantly get away and set the pace, making everyone catch you. That’s really the advantage that Johann has over his teammate on the same motorcycle – Folger – is Johann’s ability to be a quick starter and to get out front. They talked about that over the weekend – Folger and Johann’s time halfway through the race is basically about the same, so Johann certainly shows that strength.

Jack Miller – that crash that he had in practice, going into the right-hander, turn one, at that speed… in some respects, I’m kind of surprised it hasn’t happened before. They’re tipping in at close to 300kph, then getting on the brakes with that lean angle before they pick it up to begin the transition to the left. So you could see why it happened. He got on the brakes, locked the front and it turned him right straight into that wall.

With that and then Marc’s crash that he had in the race, which was similar – I don’t think he was on the brakes yet, but he tucked the front and crashed; that’s why why he slid forward instead of veering him over the right – it’s definitely a tricky spot and something that may have to be considered. The wall, at least to the right, might be too close because Jack was very lucky. You can’t protect against everything, but you have to take into consideration what possibly could happen. 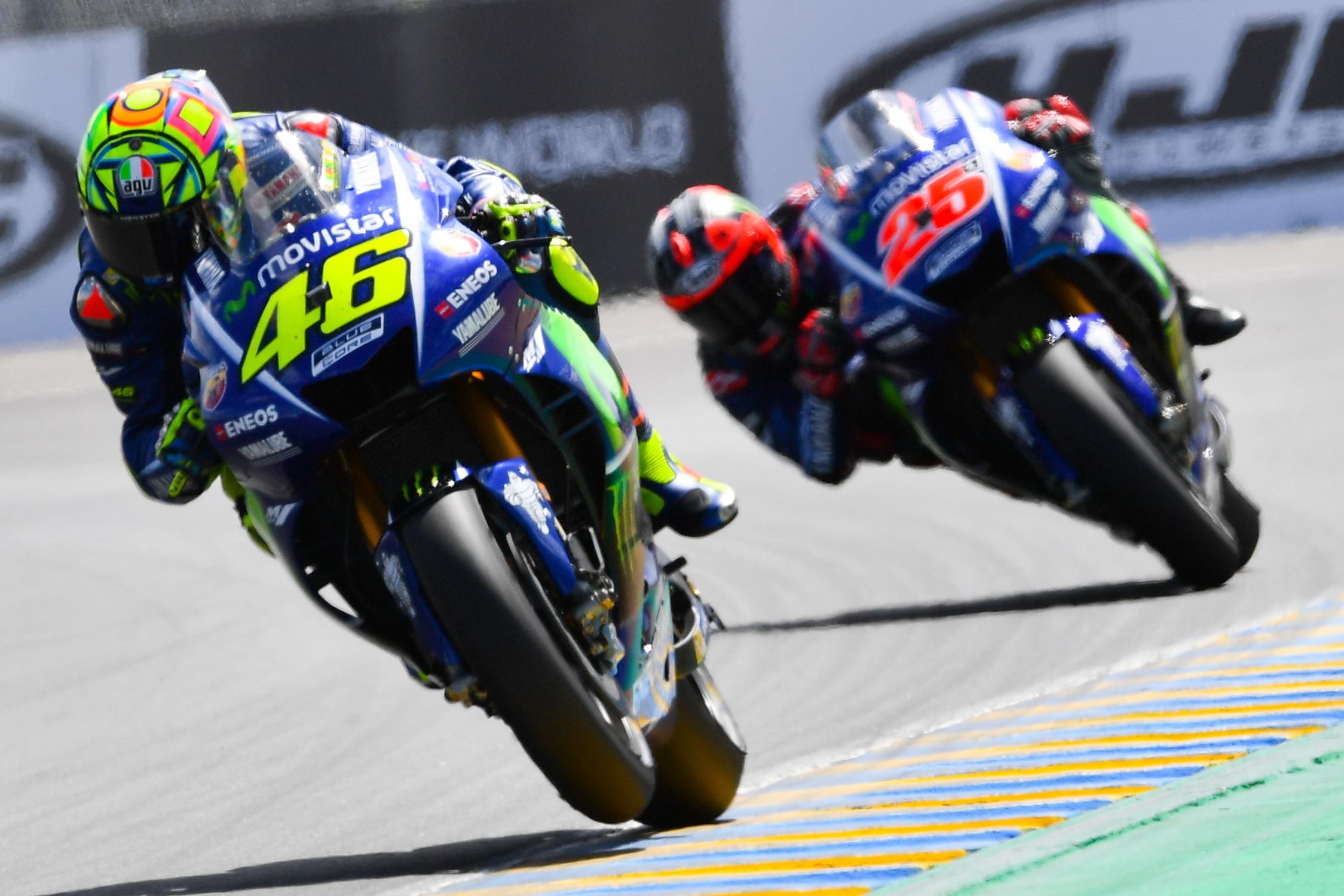 Once the race started I felt that Maverick was going to be really strong. He had struggled after the first two races, he certainly struggled in Texas and then in Jerez, so it was maybe time for him to come back and he was able to come back. That shows he’s really going to be there. That last lap with Valentino was really amazing, because Valentino is always strong on the brakes.  We’ve talked about that – it’s one reason why it looks like they’re going back to the stronger construction tyre after their vote on Friday night where 20 riders of the 23 voted to go back to the stiffer construction tyre in the tyre meeting.

So Valentino is definitely good on the brakes, but what was impressive to me was how good he was in the race, especially towards the end coming off the corner. If you watched it, he was really strong, because even though Maverick mid-corner was catching him a little bit, Valentino was getting off the corners so well. This weekend he was doing both. That’s why I thought for sure, even when he made that mistake on the last lap when he ran a little bit wide, which he can do sometimes and that’s a product of him always working with his corner entry, he gets in the corners so deep.

I thought that he still had a chance and the place he was going to do it was the right-hander coming out of the left before the double-right lean going onto the straight away, but he crashed and lost the rear end. That’s not what you would expect to happen and that’s what caught him off-guard. But he definitely rode well and I think it sets up well for him, especially with this new construction tyre. He’s definitely going to be tough and Viñales is going to be tough.

I think the rider who I’m definitely unsure about because he’s having to ride the bike so much on the edge right now is Marc Márquez. He talked about that – he had three crashes over the weekend, so that really doesn’t bode well for him, but we’ll have to see.

Remembering Nicky Hayden by Mat Oxley
Motorcycling has lost one of its fastest, gentlest racers. Rest in peace.

Red Bull had the greatest success but was it the strongest F1 team of 2022? Allan McNish and Lawrence Barretto join Chris Medland for a podcast with some surprising verdicts

Which of this year's 22 grands prix stands out as the best? Jolyon Palmer and Jack Nicholls join Chris Medland to pick the race that combined drama, excitement and overtaking

Was anyone better than Max Verstappen this year? IndyCar driver Romain Grosjean and Motor Sport's Damien Smith join Chris Medland as they weigh up the best driver of the 2022 Formula 1 season in our review podcast