NASCAR mourns the loss of ‘Last American Hero’ Junior Johnson, who began his career in the sport’s moonshine roots 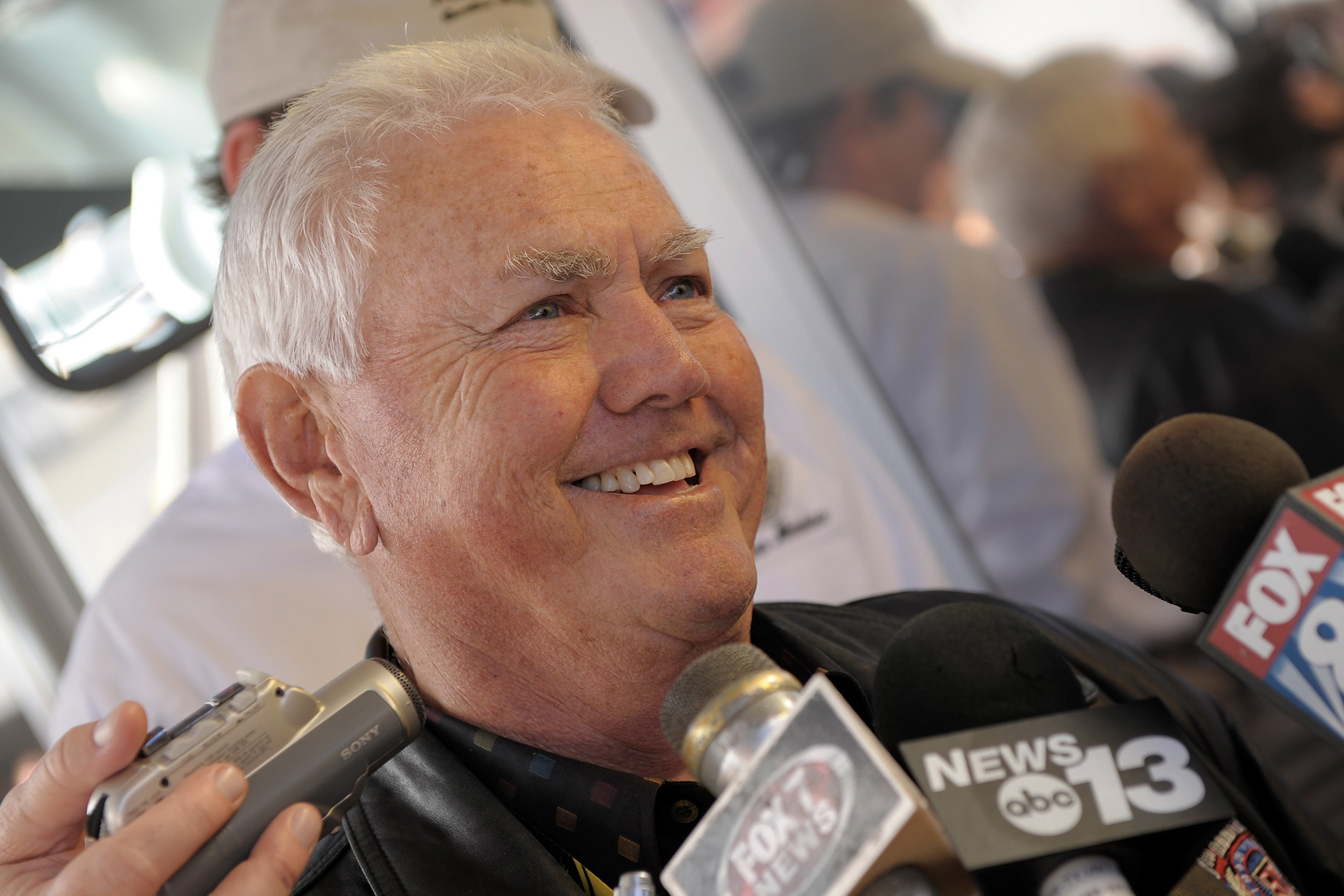 Junior Johnson, who evaded police on high-speed moonshine runs before becoming a NASCAR great, has died at the age of 88.

Johnson made his name as a power sliding, hard-charger who thrived in the dog-eat-dog arena of 1950s and early ’60s NASCAR.

He’s credited with discovering the power of drafting, which enabled him to pull off a famous Daytona 500 victory in a Chevrolet that was 10mph slower than the pace-setting Pontiacs.

After 14 years and 50 race wins, Johnson retired and moved into team ownership. His innovative engineering solutions took advantage of rule loopholes and helped to deliver six of the championships that had eluded him as a driver

His legend was set in 1965 thanks to a Tom Wolfe essay in Esquire magazine, headlined: “The last American Hero is Junior Johnson. Yes!”

Lauding his colourful background and hard-nosed driving that appealed to fans, it formed the basis of the film Last American Hero, starring Jeff Bridges.

More recently, Johnson promoted legal moonshine. At the Goodwood Festival of Speed, he reportedly presented Lord March with a jar of the clear liquid and a peach, telling him: “This here’s a fruit drink.”

“Junior Johnson truly was the ‘Last American Hero,” said Jim France, chairman and CEO of NASCAR. “From his early days running moonshine through the end of his life, Junior wholly embodied the NASCAR spirit.”

Johnson, born Robert Glenn Johnson, Jr.,  in 1931, learned to drive from the age of eight by transporting bootleg whiskey from his father’s copper still near North Wilkesboro, North Carolina.

The region had a reputation as ‘Moonshine County’ where, at the dead of night, back roads echoed to the rasp of engines tuned to outrun police.

Johnson’s talent and speed became legendary amongst the bootleggers. He was said to have never been caught behind the wheel, thanks to manoeuvres like the “bootleg turn”, which helped him to dodge roadblocks, and which was outlined by Wolfe in Esquire.

“You threw the car into second gear, cocked the wheel, stepped on the accelerator and made the car’s rear end skid around in a complete 180-degree arc, a complete about-face, and tore on back up the road exactly the way you came from. God! The Alcohol Tax agents used to burn over Junior Johnson.”

His racing debut came by chance at the age of 24: a shortage of competitors at the nearby North Wilkesboro Speedway prompted a call for local drivers to enter the stock car race. And so, driving a 1939 Ford, Johnson took the start. He finished second.

He gradually moved to the national leagues, winning his first top-division race in 1955; his progress only temporarily halted by an inconvenient spell in prison after he was caught at his father’s still – a crime for which he was later pardoned by President Ronald Reagan.

The 1959 season brought a no-holds-barred door-banging duel with Lee Petty and the following year, his Daytona 500 win.

Johnson and his Chevrolet looked set to be the supporting cast to the faster Pontiacs until Johnson pulled behind one of the quicker cars on a curve during a practice session. To his surprise, he found that he was keeping up with the faster car as they accelerated onto the straight.

“As long as I stayed right in behind him, I noticed I picked up speed and stayed right with him and my car was going faster than it had ever gone before,” he told Wolfe. “I could tell on the tachometer. My car wasn’t turning no more than 6000 before, but when I got into this drafting position, I was turning 6800 to 7000. H’it felt like the car was plumb off the ground, floating along.”

“I’d rather lead one lap and fall out of the race than stroke it and finish in the money,”

He continued racking up wins and breaking lap records by pushing the limit, taking bigger risks than rivals, and never shying from a battle. However, he was never a serious contender for the championship, suffering frequent mechanical issues.

“I’d rather lead one lap and fall out of the race than stroke it and finish in the money,” Johnson told Wolfe.

When Chevrolet pulled out of racing in 1963, he went it alone. Despite having to source his own parts, he still recorded wins against factory teams.

At the end of 1965, Johnson announced that he would be ending his racing career the following year. “Racing has been good to me,” he told the Associated Press. “I want to make it clear that I am not quitting because I am too old to drive or am afraid of high-speed racing. I have accomplished about everything I had hoped to as a driver. Now I want to relax and enjoy life, but still be connected with the sport in a supervisory capacity.”

As a team owner, Johnson won three championships with Carl Yarborough and a further three with Darrell Waltrip. He also helped to broker the series’ Winston sponsorship deal in the 1970s.

“He was an inaugural NASCAR Hall of Famer, a nod to an extraordinary career as both a driver and team owner, said NASCAR’s CEO, Jim France. “Between his on-track accomplishments and his introduction of Winston to the sport, few have contributed to the success of NASCAR as Junior has. The entire NASCAR family is saddened by the loss of a true giant of our sport, and we offer our deepest condolences to Junior’s family and friends during this difficult time.”