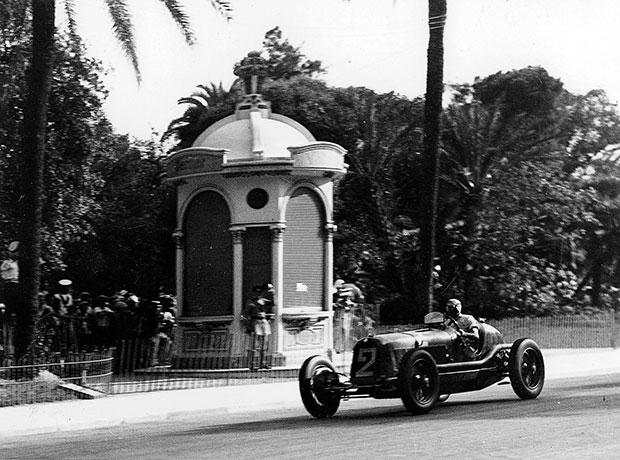 Nuvolari in action in the Maserati in Nice that year.

Fernando Alonso falls out once and for all with Luca di Montezemolo, signs a secret agreement to drive a Red Bull, makes his own last-minute design changes before his maiden race in the car – and wins by three minutes. Sounds fanciful? Well, not by the standards of 1933.

Tazio Nuvolari – the Alonso of the 1930s if you like – had finally endured enough of Enzo Ferrari and the team lacking a P3 in the wake of Alfa Corse’s withdrawal from racing. So, after talks with the Maserati brothers, he set up his own team with Baconin Borzacchini, bought the 8CM-3000 previously driven by Raymond Sommer and became a works-assisted Maserati driver. Arch-rival Luigi Fagioli stormed off to replace Nuvolari in Scuderia Ferrari’s Alfa Romeo team.

At Spa, Nuvolari took his Maserati bow – and was horrified to discover how the chassis flexed on the fast Belgian roads. After practice, he took the 8CM off to the nearby Imperia factory and directed as the mechanics got busy welding.

Back at the circuit he’d been drawn on the back row for the start, but wasted little time once the flag dropped. The welding had clearly made a difference. Nuvolari, aged 40, led every lap bar three in the middle of the race, after taking on fuel and new tyres. He left everyone, even the great Achille Varzi, in his dust.

Interestingly, the race is officially Scuderia Ferrari’s only win using a Maserati. As a contractual compromise between driver and team, the 8CM was entered under the name of the Prancing Horse – even if it didn’t carry the now-famous yellow shield on its flanks. DS