The support package at a modern Grand Prix meeting is a homogenised beast, with precious little diversity. This isn’t always a bad thing – the GP2 Series is one of the most consistently entertaining spectacles in any sporting sphere, thanks to a cocktail of cutting-edge talent, raw ambition and occasionally wayward testosterone – but it’s a bonus when something different is added to the mix. 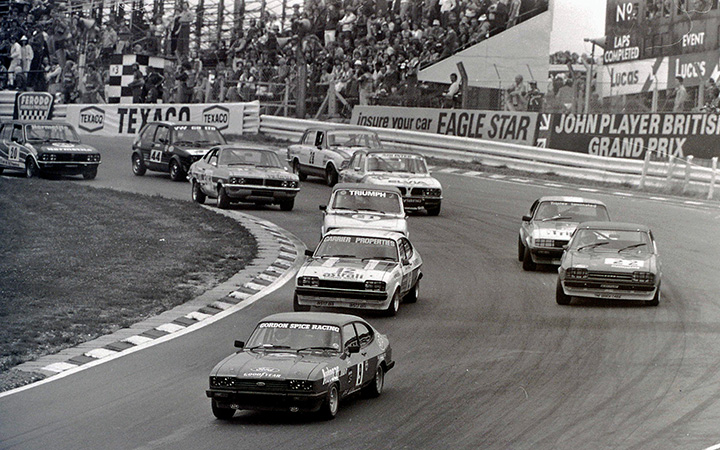 Then again, rose-tinted spectacles can’t mask the fact that the British GP tended to have a familiar feel 30 or 40 years ago, with British F3 and British Saloon Car Championship races propping up the main act, and perhaps a celebrity race thrown in. Back then, mind, British F3 often required two heats and a final, rather than having no cars at all…

It is getting on for 20 years since the BSCC/BTCC supported the British GP and the shot above shows how things used to be, with the nation’s premier tin-top series serving as a warm-up act. While the schedules of the day might have been fairly regimented, however, entry lists were anything but when it came to the highest-profile fixture of the season. Extra drivers would often pop up, just because it was a GP support race, and it wasn’t unknown for production saloon racers to join in by simply sticking a set of slicks on a car that had absolutely no chance of being competitive.

The field included four drivers with at least one F1 world championship start to their names – Bell, Chris Craft, Mike Wilds and Dieter Quester – and another who would go on to contest 158 Grands Prix, promising young Toyota racer Martin Brundle.

Quite a distinguished cast, all told.