With ’80s month in full swing, editor Nick Trott remembers being a passenger in an SWB Audi Quattro, and the wall of noise it exuded hurtling through a forest in Canada 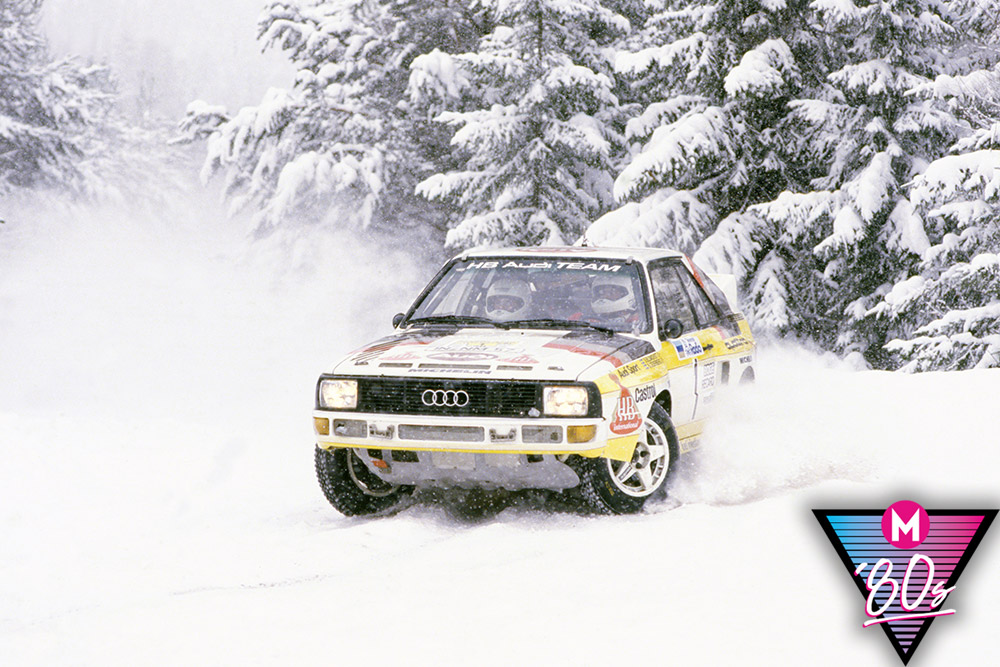 It was freezing. Not the British kind of freezing easily solved by an extra jumper, but the kind of freezing that turns boiling water to ice if you hurl it into the air – just as a friendly guide had just shown me.

Being ‘80s month, this is a short piece on what it’s like to ride shotgun in an Audi Sport Quattro on ice, through a forest in Canada, and how the three short minutes demonstrated elements of the ’80s that we’ll never see again. Which in some respects, isn’t a bad thing.

The Audi’s five-cylinder engine didn’t idle a neat, efficient hum. It sat there hunting and growling a deep, angry growl. There was something about all 1980s racing machines that gave you a fright, even when they were standing still. Group C cars, 500c bikes, F1 cars and rally cars – they all exuded menace moving or not.

Secondly, my driver: He was a European Historic Rally Champion. His name escapes me, but he was small, muscular and walked with an incredibly confident gait.

Muscles – ’80s racers were made of muscles – not wiry tendons.

Next. Safety. Or lack of it. I was about to be hurled through a forest in a turbocharged car from 1985 with 500bhp and a roll cage that looked, erm, modest – at least to my spoilt modern sensibilities. How did drivers and co-drivers look past the inherent risks of ‘80s motor sport?

Oh, and the surface. Slippery doesn’t do it justice. The layers went like this: snow, compacted snow, ice. Deep, crystal blue ice. I could barely stand on it, but my driver was about to skate a ton of metal over it. Between trees. Big, tall, unforgiving Canadian trees.

I felt fear, which is how it should be.

Then we accelerated with a wallop – a chunky turbocharged wallop – and a surge of adrenaline blended with the fear.

Fear and adrenaline, the ‘80s racers’ cocktail of choice.

Then I watched as my driver fought like a man possessed to prevent the naturally understeering Audi from ploughing into every snow bank and tree that lined our course. He did this by flicking the car into big, extravagant, oversteer skids long before the traditional corner entry point.

Indeed, sometimes he did this before we could even see the corner.

How ’80s is that? A driver rolling up his sleeves to make the vehicle do something it absolutely doesn’t want to do? Today, the car and the driver seem to work in total harmony. Which is of course, if speed is your goal, how it should be: zero wasted effort. Maximum pace and reward. Not as fun to watch, mind.

As the pace escalated and our driver got in the groove you could see in his face, in his body language, and in his increasingly exaggerated inputs that a charge taking place; a proper, full-blooded charge.

Ah, a charge. In the ’80s we saw drivers charge like in no other decade, surely?

Then it was over. I was giddy, dizzy, and looked absolutely like someone who had been through a wringer. And, to some extent, so did my driver. Visible, physical effect from operating a machine on the limit. We don’t see much of that anymore. You did in the ‘80s.