Two years ago Aston Martin announced the follow-up to the Valkyrie hypercar. It would be called Valhalla, it would be powered by a brand new 3-litre V6 engine with hybrid power attached, just 500 would be built and each would be sold for £1.2 million. To Aston Martin it was part of a carefully formulated strategy that combined with the Valkyrie project and its return to Formula 1 to ensure that by the time it launched its first series production mid-engine car – the Vanquish – the Aston Martin brand would be fully accepted as a mid-engined supercar manufacturer.

Why? Because that’s where the money is in the ultra-luxury sector of the market, around £200,000 where even posh SUVs fear to tread. Look at the core offerings therein from Ferrari, Lamborghini and McLaren and you’ll see what I mean. Before Valkyrie, the only mid-engined Aston Martin had been the Bulldog concept of over 40 years ago.

But even as the covers were being pulled off the Valhalla, the company was in trouble: sales were stalling, debt was mounting and the IPO on the London Stock Exchange had been a disaster. In time and inevitably in such unprepossessing circumstances, Andy Palmer departed the boss’s chair.

And almost a year ago now, in swept Tobias Moers from AMG and started to make the changes he felt necessary to return Aston Martin to profitability. And in few places are those changes more clearly seen than the Valhalla, the first all-new car to be signed off for production on his watch.

Yes, it’s still a carbon-fibre two-seater, but just about everything else about its specification and positioning has changed. For a start, it’s no longer powered by a brand new 3-litre V6, but a rather familiar 4-litre V8, sourced from Moers’ chums back in Affalterbach. Moers says the V6 was ‘a concept engine’, a mile away from being production-ready, let alone being able to meet the emissions challenges of the future. So what would have been the first engine designed in-house by Aston Martin since Tadek Marek’s V8 fired up 56 years ago got canned.

The V8 has 740bhp all by itself, thanks to a flat-plane crankshaft configuration first seen on the AMG GT Black Series. To that, front and rear electric motors add a further 201bhp to create a total system output, says, Aston Martin, of 937bhp. Plenty in other words.

But while it has no less power than would the Palmer Valhalla, the Moers car is going to cost about half the money with prices starting at around £600,000. How can this be done? Simply, by building at least twice as many. The Valhalla is no longer a limited edition, but a series production car. That said, I am told it is unlikely that more than 1000 will be built, not least because a roadster version will be difficult to engineer.

The look is completely revised too so as to make it appear much more recognisably an Aston Martin, which is probably a smart move. The car seems also to have been delayed, presumably to incorporate such myriad changes, with deliveries now not due until the second quarter of 2023.

So what data can we feast upon while we wait? Well the power you know, but in a four-wheel-drive car weighing 1550kg dry (so approximately 1650kg with fuel, oil and water) it can reach 62mph in 2.5sec and a top speed of 217mph. It will also do 80mph on electric power alone, in which state the car is actually and temporarily front-wheel drive. It has an all-electric range of just nine miles.

But perhaps of most interest will be its Nürburgring lap time target of below 6min 30sec, faster than any road car to date. So to put this in its proper perspective, such a time would have placed it third on the grid for the final 1000km race ever held on the Nordschleife back in 1983. Quicker than the factory Lancia LC2s, quicker than all the private Porsche 956s driven by luminaries like Keke Rosberg, Jan Lammers, Stefan Johansson and Bob Wollek and beaten only by the two works Porsches driven by Stefan Bellof and Jacky Ickx on qualifying boost 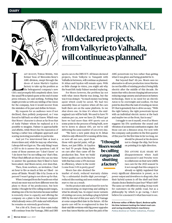 Fresh direction for Aston Martin, as new boss does the same — but better

Last August, Tobias Moers, the former boss of Mercedes-Benz’s AMG division, swept through the doors of Aston Martin’s Gaydon factory to take up his position as the beleaguered company’s new…

And, yes I know the track is not exactly the same, but these were full ground effect, prototype racing cars with vast slicks, and the Valhalla a street machine with treaded tyres and number plates. Some will say ‘what do you expect after 40 years of development’ and they have a point, but I still find the prospect – if it does what Aston Martin claims – to be fairly extraordinary.

So much about this ‘new’ Valhalla encourages me. If an impractical and unworkable engine has been ditched in favour of one known to be bombproof, that clearly makes sense despite the millions wasted. I’m not worried that the result is heavier or that the car has been delayed. I prefer by far the new look and the performance of the car speaks for itself.

But that decision to put it into unlimited production concerns me. If they really don’t think there’ll be more than 1000 cars, why not say so? I guess because if it’s a smash hit they’ll feel foolish stopping production while demand remains strong. At the same time, £600,000 is a vast and possibly unprecedented amount to ask for a car with no upper limit to the numbers built. I feel it will scare off an entire constituency of potential prospects who like to put such chattels under a cover in a shed and watch them appreciate.

Good riddance you may say, but like their motives or not, these people are vital to the success of such companies. Were I in charge, I’d say we were building 950 – its power output in PS – and be happy to let demand exceed supply with all the longer-term benefits to the brand and residual values that brings.

Even so, Moers’ first big step is interesting to see and, with the one reservation outlined above and on paper at least, it appears to be in the right direction.