Ed Foster journeys north to visit restoration and sales business Cheshire Classic Cars. The rapidly expanding enterprise is owned and run by Iain Tyrrell who started life working on Rolls Royces and Bentleys before becoming a professional singer and a born-again Christian. 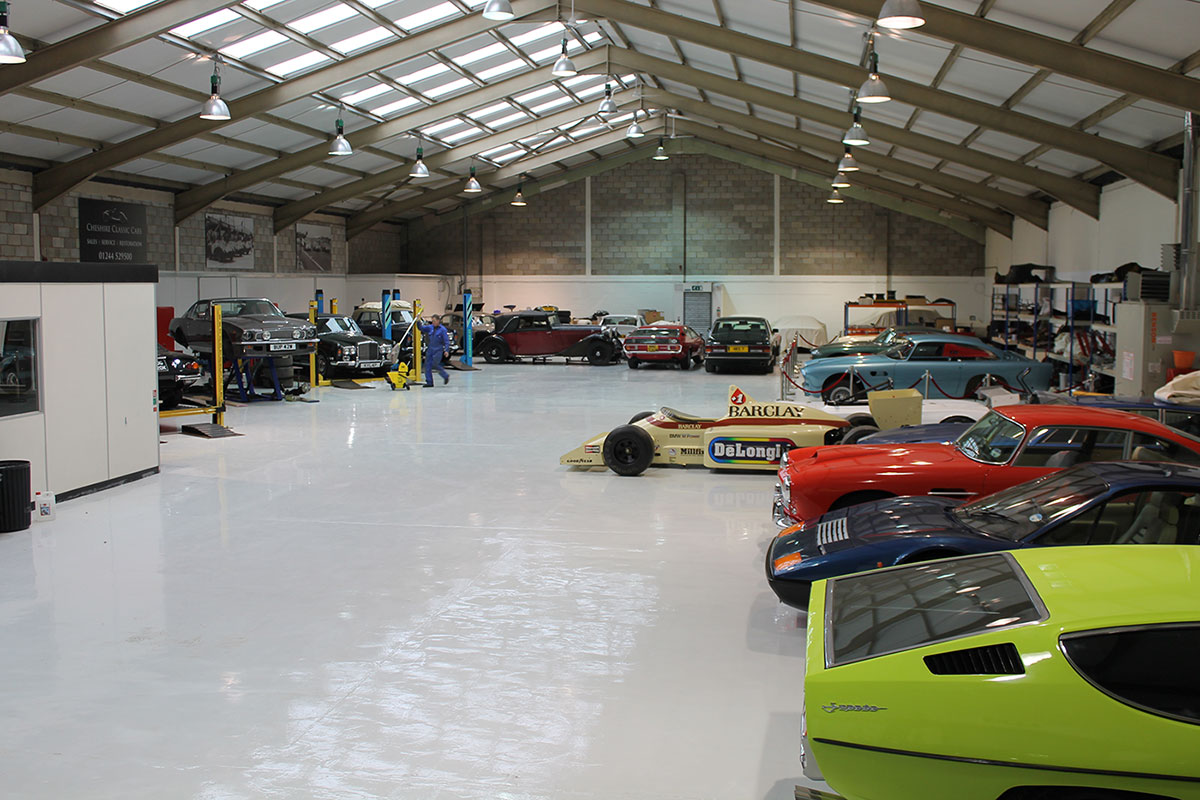 Come the end of October thousands of rally fans will descend on Deeside, Wales to watch Wales Rally GB. What most of them won’t know is that just a few miles down the road are warehouses filled with exotic machinery.

I wouldn’t have either until I visited Cheshire Classic Cars. Just west of Chester sits Hawarden Airport and buried within its confines is this bustling classic car restoration and sales business.

Thirteen years ago this brainchild of Iain Tyrrell occupied a small warehouse on the same site that “took six cars at a pinch”. Nowadays the business spans several warehouses that can take hundreds of cars. There are no visual signs that such a mecca exists as you drive in past two Sukhoi Su 17s, wondering whether you’ve been directed to the right place.

Tyrrell needs to clear his desk before talking to me. It doesn’t help that I am two hours late. Even when he does have time to chat it’s punctuated by his phone constantly ringing and emails pouring in. He’s a popular man whose life has been spent around cars.

“Between the ages of 19 and 21 I was a Rolls Royce and Bentley mechanic at a Rolls Royce service station. When I was there if you couldn’t balance a 50p piece on the engine when it was finished you had to start again. Those were the standards I was working to.

“At the age of 21, bold as brass, I started my first business called Tyrrell Engineering which I stopped in 1996 when it became a Mercedes-Benz satellite dealer.” 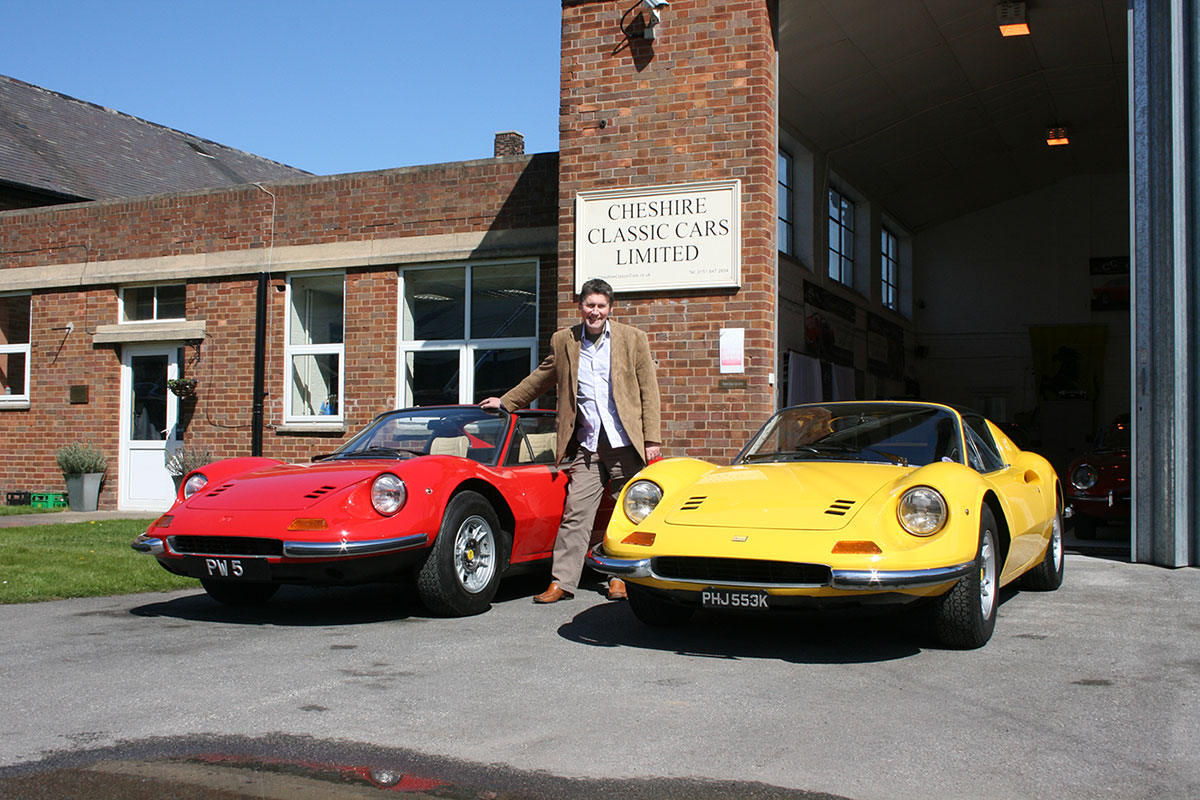 It was then that things got interesting for Tyrrell. “I went into the music business as a professional singer and had a very high compression of activity and experiences between then and 2003, when I started Cheshire Classic Cars.

“I also had a life-changing conversion to be being a born-again Christian and was on the brink of being a globally successful singer.”

Later in our chat I ask how he’s managed to grow the business so quickly and what the secret was. “At the risk of stating the obvious I am scrupulously honest and some people come to us for that alone. Everybody would say that, but…”

Tyrrell is also hugely passionate and clearly has a mind like a sponge. He says that there aren’t many cars he hasn’t worked on during the last 30 years, but he still maintains he has more to learn than he knows. “I’m still hungry, I haven’t lost the enthusiasm.”

At one end of the workshop sits an Aston Martin DB5 that looks better than it probably did when it left the production line, at the other is a bare-metal Lamborghini Miura. Tyrrell has previous here after selling the ex-Italian Job P400 at the end of last year. The orange car features in the opening sequence of the 1969 film driving over the Gran San Bernardo pass. It meets a sticky end (it’s crashed and then thrown off a cliff), but two cars were used during filming. The surviving one, which Tyrrell sold, was discovered in Paris by two British businessmen in 2014.

I digress… The Miura in the workshop today is from the eastern seaboard of the US and is in the middle of a two-year rebuild. “We’ve had to make whole sections for it,” Tyrrell explains. “We’ve made the floors from scratch, exactly to Lamborghini specification and the swaging marks on the floor are exactly right.”

At that moment his phone rings and he politely asks whether he can take it. As he chats I wander through the back of the workshops into another warehouse filled with cars. At the end sit Rolls Royces, at the front there are rally cars, there’s even a Lotus Europa (that I don’t fit in sadly).

“Yes,” says Tyrrell when he’s off the phone, “my passion is for eclectic and esoteric cars. I’m not really interested in Morris Minors. Great cars though they are, they’re not my business. The more camshafts and carburettors a car has the better it is for me.

“My general attitude to cars that we buy and sell is that if it has what I would want when I was looking for a car I think it will have what other people want. I want to see a good history file, preferably supporting mileage, I want to see faithfulness to originality, I want to see those two things – provenance and originality – to a point where it stands out from the crowd.

“Unfortunately I haven’t had that luxury of buying cars as investments, I haven’t been able to play a speculating game, but I do think Citroen SMs are looking conspicuously cheap at the moment. Some 1970s cars were quite crass in period, like early XJSs for example, and therefore they have been discounted, but now some of them are coming back in. It’s quite a cool period in design. To use the example of the SM – it looks fantastic, it’s very complex and it’s only been in the last five to 10 years that there have been enough specialists who know how to get their head around working on them. They can now be fettled into a good reliable car.” 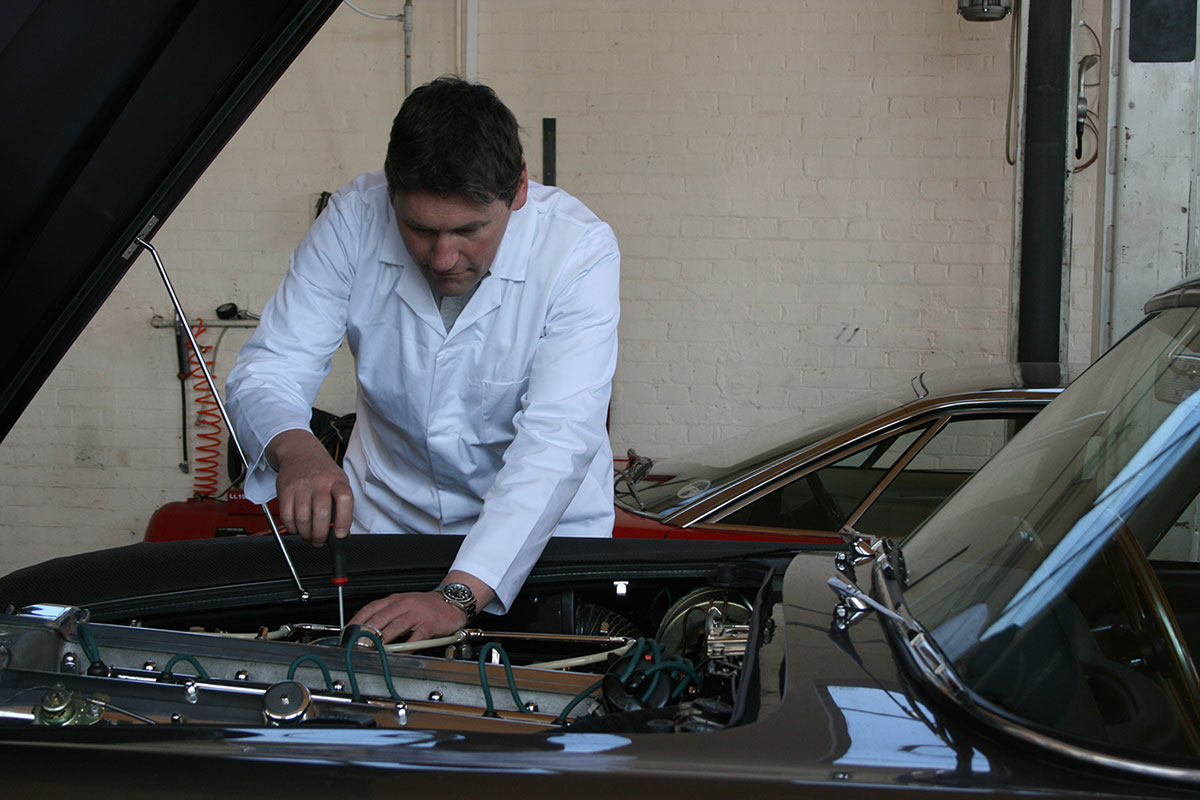 Conversation soon turns to barn finds and the prices they achieve. “A lot of them just aren’t viable,” he admits. “There is a bit of mania around them at auction and some fetch almost as much as a restored car. It’s ridiculous. The economy of them depends on whether you’re a one-man band doing the restoration yourself or whether you’re charging the hours in a workshop as we would be.” There’s also the model of car to consider – you aren’t going to make money on a barn find MGB. A 250 GTO on the other hand…

With the ‘phone still ringing and time running out I wonder what Tyrrell drives on the road. “I don’t have a collection of cars and I drive a 2002 Porsche Boxster S. My partner and I fund the business out of our own pockets so any money I do make at the moment is ploughed back in.”

His “scrupulous honesty” and passion have no doubt helped the growth of Cheshire Classic Cars over the past 13 years. I suggest it’s also the fact that there’s constant reinvestment. If you’re at a loose end near Chester soon then Google Cheshire Classic Cars. You’ll be amazed at what you find.