An everyday Ferrari? This one is getting perilously close… 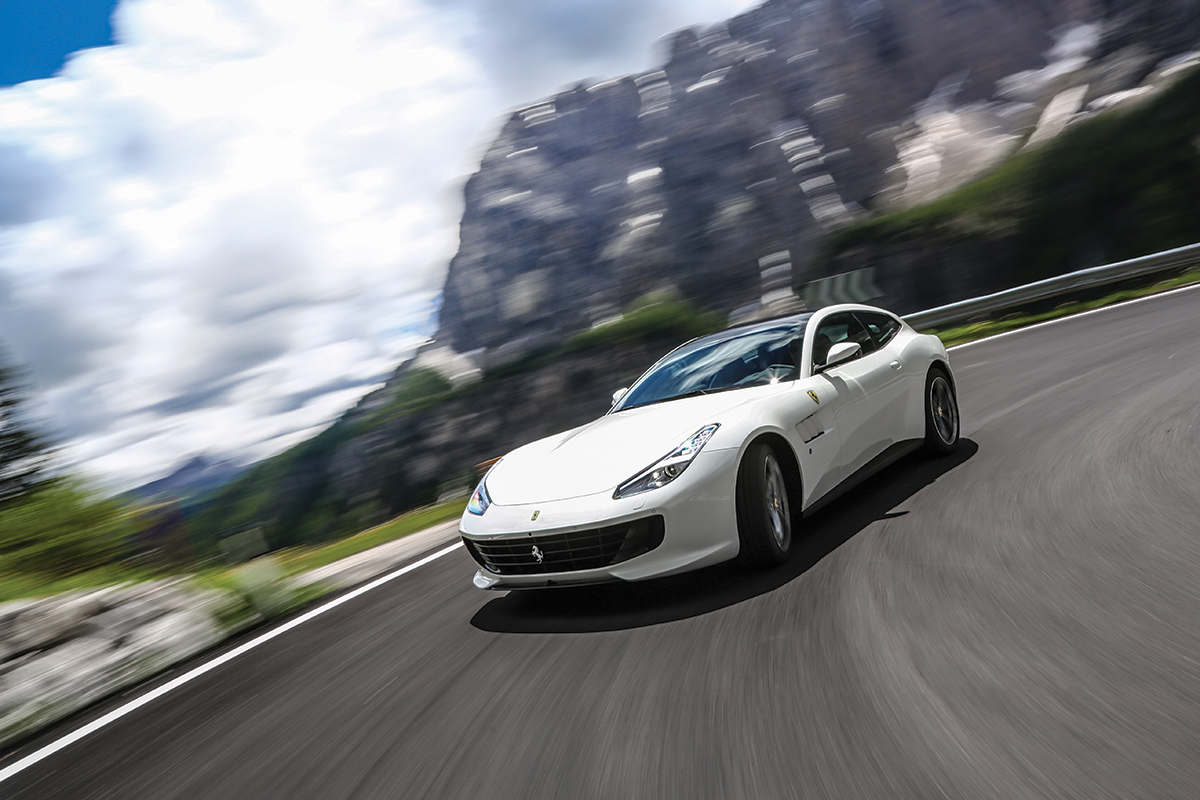 There is something strangely old fashioned about the Ferrari GTC4 Lusso. Yes, beneath the skin it packs the sort of bleeding-edge technology that’s light years ahead of the average road car, from four-wheel steering to a digital infotainment system that would have a 13-year-old nodding appreciatively, but at heart this is a throwback to a bygone age of motoring.

There’s a clue in the name. The Lusso part, meaning luxury, recalls the company’s 250GT Berlinetta Lusso from 1963 while the GTC references the 330 GTC from 1966. Both cars hold a special place in the Ferrari canon, and resurrecting their names is a shameless attempt to invoke the history and heritage of the brand.

For the Lusso it is a history that speaks of grand tourers roaring across Europe in an age before speed limits, let alone speed cameras. A time when wealthy gentleman with double-barrelled names would think nothing of packing the family into their car and cruising from London to Monte Carlo for a long weekend.

Those days are long gone and Cessnas, not Ferraris, now ferry the world’s gilded elite. But the aura of the time still has a powerful draw.

It’s the reason Ferrari is persevering with its only genuine grand tourer. The Lusso is the replacement for the FF – the four-seat, four-wheel-drive car launched in 2011 to a mixed reception. Some critics delighted in the return of a genuine shooting brake-style GT with room for the kids and a full-fat V12 engine, but questioned the idea of four-wheel drive in a production Ferrari. Was the FF little more than a family estate in disguise?

Those concerns are one of the reasons Ferrari is keen to stress the new car’s provenance and rightful place in the company’s product line by attaching Lusso and GTC monikers to it and banishing all mention of FF. And to be fair, the Lusso is more than a lightly face-lifted FF. Yes, the engine and chassis have largely been carried over, but the body is entirely new as is the cabin and much of the technology.

The overall shape of the Lusso remains the same as its predecessor, although the cabin has been pushed down over the rear wheels giving it – according to the design team – the appearance of a catapult pulled back and under tension, ready to release its energy. Make of that what you will, but there’s no denying the Lusso is subtly more attractive than the FF. More obviously, the rear lights reintroduce the double cluster of bygone Ferraris and there is a new air intake grille giving the Lusso a more imposing look when it appears in your rear-view mirror.

But it is under the skin that much of the real work has been done. The Lusso is a veritable melting pot of Ferrari’s newest technology – brought together in one car for the first time. So, as well as four-wheel drive the men from Maranello have added rear-wheel steering, first seen on the F12 TDF, which allows the back wheels to move up to 2 degrees to improve stability and sharpen handling.

The system, called 4RM-S (four-wheel drive and steering) works by turning the rear wheels in the opposite direction to those at the front when entering a bend, then turning them in the same direction as front when exiting. It is applied in conjunction with Ferrari’s slip slide control and electronic differential to send power and torque to any of the four wheels. The computing power needed to calculate the variables of grip, direction and torque while travelling at high speeds is enough to scramble the brain of most drivers but the result, according to Ferrari, is unprecedented grip on wet or icy roads.

One reason for the high-tech approach is that the Lusso is aimed at a new type of owner; younger, newer to the brand, who will use it as an everyday car, occasionally with family in tow. Witness the user-friendly touches inside: spacious boot, rear seats with 16mm more leg-room than the FF and more cubby-holes to store children’s paraphernalia.

The state-of-the-art infotainment system features Apple Car Play and an optional split screen allowing it to show different content depending on viewing angle, so the passenger could watch a movie while the driver sees the sat-nav map. The cabin is better insulated than the FF too, with reduced road and engine noise. And there’s a handy switch to lift the front of the car over speed bumps.

So how does it perform in the real world? Ferrari chose the mountain passes of the Dolomites near the Italy-Austria border to give the car its first official test. Fire up the engine and the front-mounted V12 ignites with a bark loud enough to rattle the windows of a distant schloss, but then immediately dials back the noise to a gentle gurgle. The reason: buyers of the FF had complained about engine noise at idle being too intrusive for a car to be used as an everyday vehicle.

Things begin sedately. Stick the Lusso in automatic mode to nose through local city traffic and you could be at the wheel of a slickly made German saloon – without engine noise or the drama of more sporting Ferraris the prancing horse feels strangely gelded. 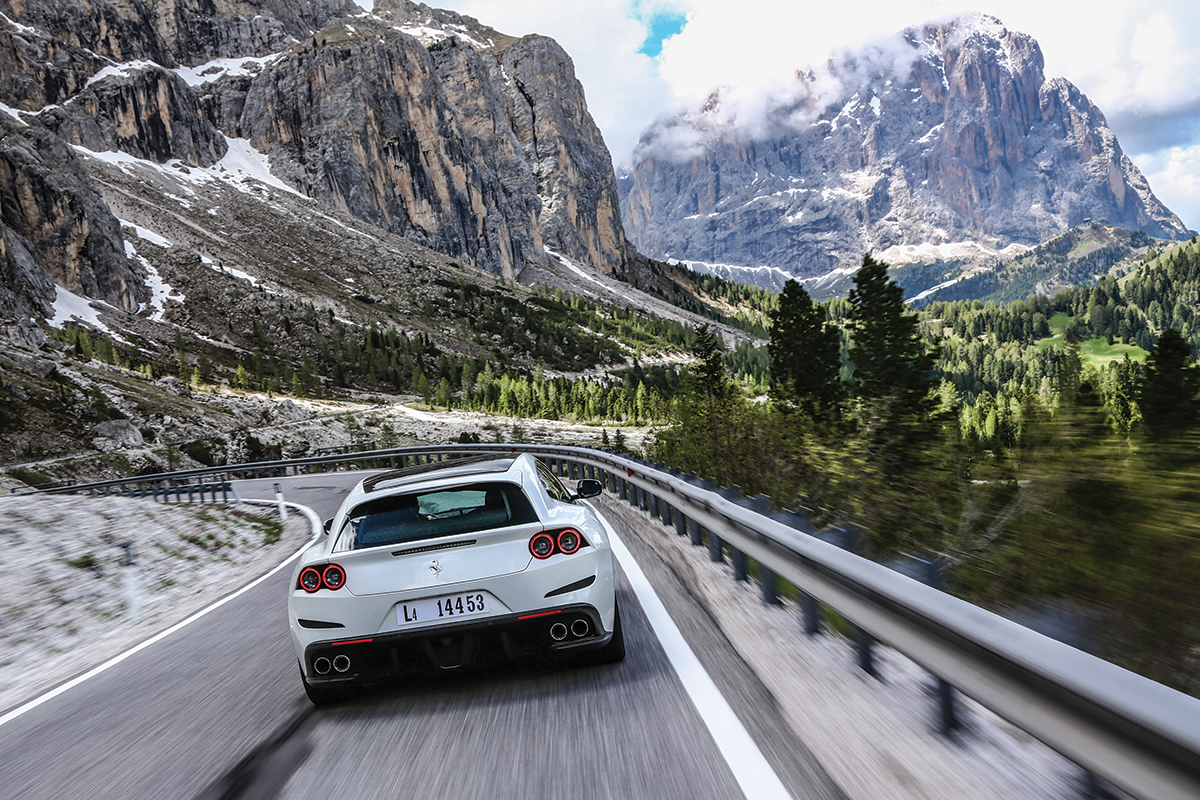 Things are a little different on the open road: a couple of clicks on the steering wheel-mounted gear paddles and the car switches out of auto and into manual. Drop a gear or two and press the throttle. A surge of power catapults the car forward, accelerating faster than you can think; the surge continues long after you expect it to end with the V12 only reaching screaming point after 8000rpm. Click up and the fun begins again.

Not that the roads around the Dolomites are its natural home. Hairpin passes zig-zagging up mountains might be fun in an F12 or even a Mazda MX-5, but in a big four-seater they quickly become laborious and you sense the car itself is getting frustrated: every time it reaches anything approaching cruising speeds it’s back on the brakes for another switchback. Even the sat-nav voice seems confused, instructing the driver to “turn right” or “take the next left” at each sharp bend.

In truth, the car is happier away from the twisty stuff, out on the wide-open roads, with long ribboning curves. Here it is the epitome of refined and powerful driving, eating up the miles with a nonchalance that puts any other car on the market to shame. Cocooned in the cabin, with a bottomless lake of power in reserve, a 1000-mile trans-continental journey would be a pleasure.

But is that what today’s Ferrari owners want? After all, if it’s a family-friendly, practical and powerful luxury car with all-wheel drive you are after there has never been more choice, from Bentley’s W12 Bentayga to the Range Rover SVAutobiography and upcoming Lamborghini Urus. Ferrari, of course, insists it will never make an SUV, and stands steadfast behind the idea of a grand tourer with enough luxuries and practical touches to appeal to buyers who don’t want an out and out sports car.

It might be right. And you have to admire its refusal to bow to current trends. Certainly, in an age of increasing convergence and identikit cars, the GTC4 Lusso stands gloriously alone. It might, ultimately, be a curio but we’re lucky it exists: after all, if Ferrari didn’t make it, no one else would.