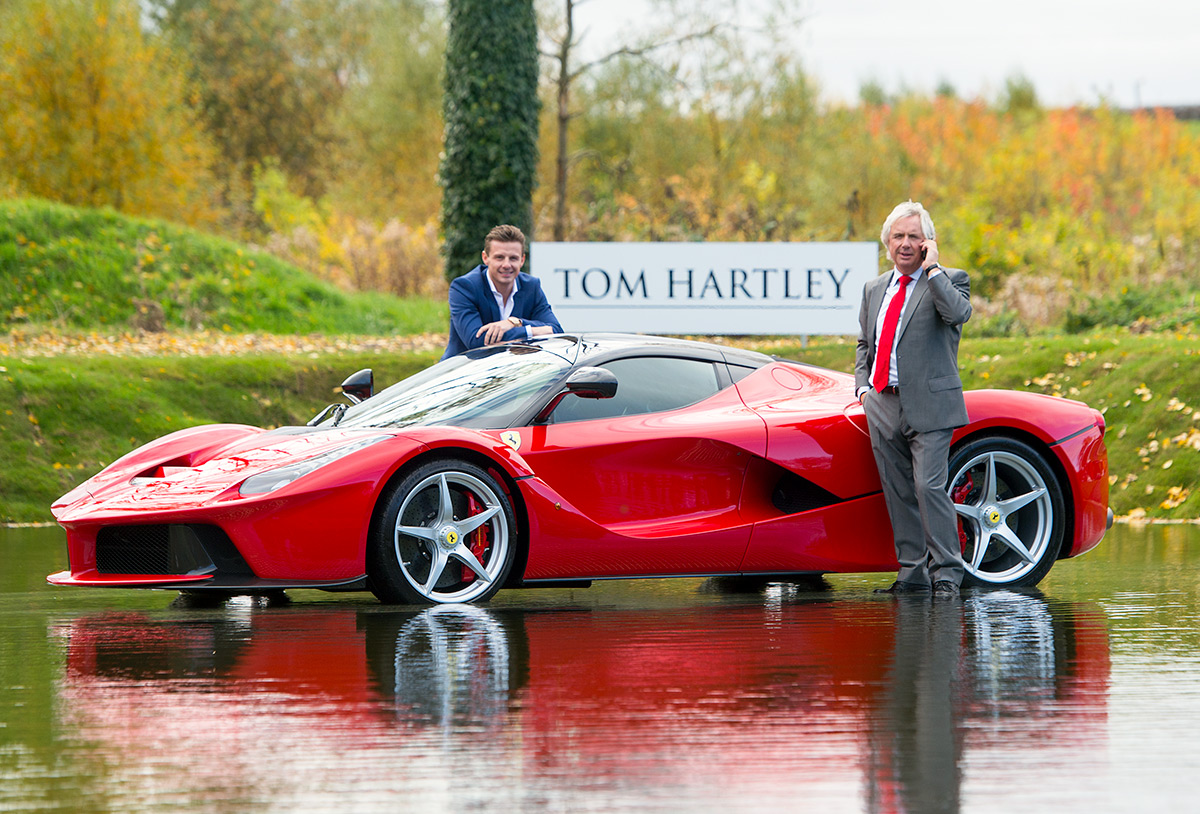 There is absolutely nothing normal about Tom Hartley.

Many of you will know the car dealer, who has been in the business for over four decades – it would be hard not to, he’s featured on Top Gear, Fifth Gear, Bloomberg and almost every motoring magazine on the planet. His youngest son, Carl, who has a 50 per cent stake in the business, is one of the wealthiest under 30 year-olds in the country.

His eldest son, also called Tom, has been on Britain’s Richest Kids and has now set up his own dealership a stone’s throw from the Hartley base. “I’m proud of both of them and what they’ve achieved,” Hartley Snr says.

Some quick facts before we continue. Tom Hartley doesn’t believe in school. He never went (“they called me a dunce”) and by the age of 12 Tom Hartley, Tom Hartley Jnr and Carl had each sold their first cars. Tom doesn’t actually own a vehicle and admits that he is a businessman, a dealer who happens to trade in cars. He was valued recently at £230 million and despite his small stature he eats a lot.

The latter is no doubt due to the hours that he keeps: he opens the showroom at 7.30am and then works all day. He has dinner with his wife at 6pm and then returns to work at 7.30pm and stays until 10.30pm dealing with the American market. On my visit he hadn’t yet had time for breakfast.

The showroom is nestled in the countryside between Derby and Birmingham and the family has been there for 35 years. What started as a cottage and one acre now extends over 40 acres and includes five houses, one showroom with another under construction and a lake that cars are photographed on (yes, on). Carl lives and works onsite and the dealership is manned 24/7. It’s even open on Christmas day: “Customers come in to pick up Christmas presents for their wives or husbands. It’s just how it is.”

At this point Carl comes in.

“You’re tall. Jesus!” He says on seeing me. Already it’s clear that this is not going to be your average lunch. Tom is deeply proud of his name, a topic that keeps coming up over the next hour and a half, and he is full of energy. The phone keeps ringing; he keeps relaying orders to staff that keep appearing. His office next door is lined with framed articles featuring his business and it doesn’t have anything resembling a computer. He prefers a phone conversation and doesn’t seemingly like technology, unlike Carl who has sold a £144,000 Rolls-Royce Ghost in six WhatsApp messages. 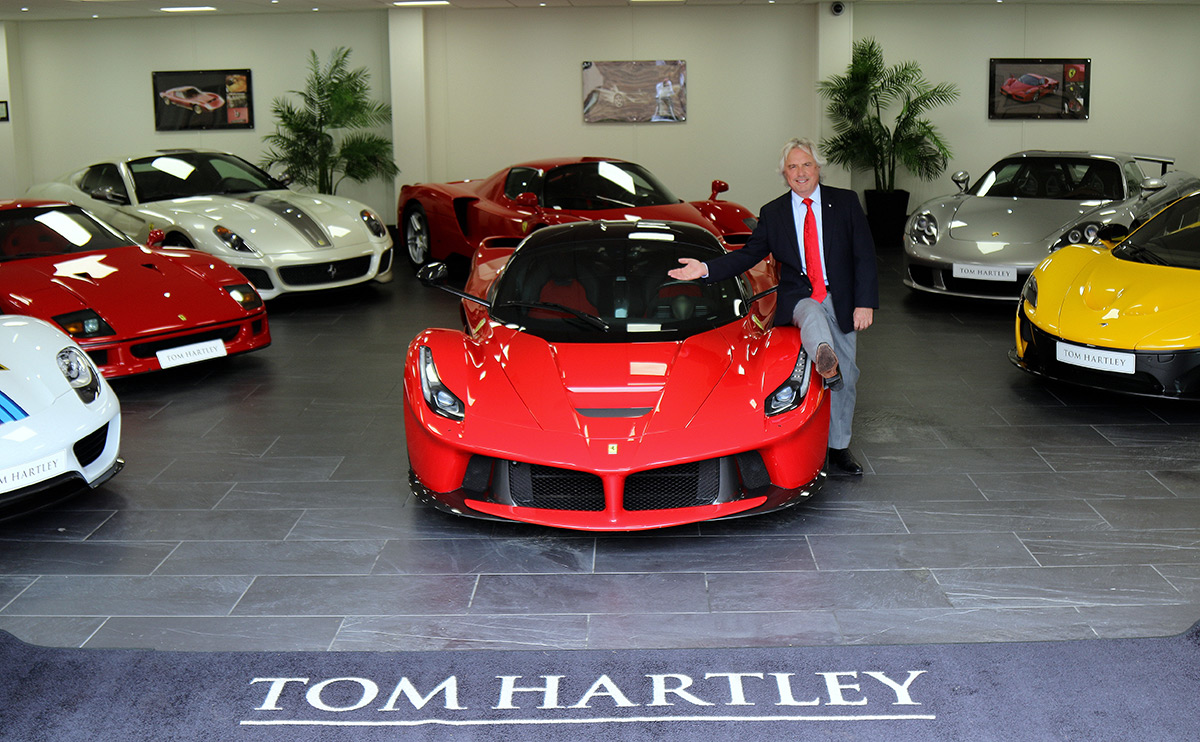 So how is Tom Hartley worth so much? Surely if he’s making that much money on deals he is ripping off his customers? If you strip back all the history, the in-your-face premises then the success filters down to one thing: supreme knowledge. That’s what Tom had when he started – he didn’t read The Dandy, he poured over car prices – and he knew exactly what a car was worth.

A good example is the sauna story: “The Jaguar XJ40 came out and I was at the Hilton near Oxford street, doing some business, when I saw one pull up outside. It was about £30,000 at the time, £35,000. Two days old the car was. I knew there was a market for the car so I asked the porter where the owner was. He told me he was in the sauna so I went in there and said ‘Hello, my name’s Tom Hartley and I happen to buy and sell cars’. He said ‘what can I do for you?’ I told him I’d like to buy his car. ‘Oh really?’

“Everybody knew, even at that time, that the car they had just bought was worth more money than they paid for it. I gave him £2500 more than he paid for it and I made £6000. I left him there, went to the bank on Oxford Street, picked up a bankers draft, went back to the hotel, handed it over. I left him and his chauffer outside the hotel and drove off in his car.

“I then got a strange call from a reporter. The guy I bought the car off reported it to the journalist. He had called and said ‘I missed my appointment, but I sold my car for £2500 more than I paid for it.’ I admitted that was me and he then says ‘Well, I’ve spoken to Jaguar,’ John Egen was chairman at the time and John had said ‘there will always be spivs around’.

“I told the guy to call Mr Egen back and tell him that Tom Hartley is not too happy about being called a spiv. ‘He didn’t refer to you specifically as a spiv, he was referring to the story.’

“’Well you tell him also that the customer that bought that car off me was his big Jaguar dealer in Reading.’ That was the truth. I bought the car and sold it back to the Jaguar dealer for £6000 profit in the same 24 hours.

“I created the premium market for cars. You can’t go back any further than 1972 or ’73 and that was when I sold the first Range Rover for a premium price. From that minute onwards, as far as I am concerned, premiums were created. In other words: you don’t have to wait in a queue, Tom Hartley will supply it for you.”

Since then Tom Hartley has built up a reputation for always being able to find the car that you want and he’ll know exactly what it is worth. The name also acts as a seal of approval – you don’t become this successful by ripping people off. 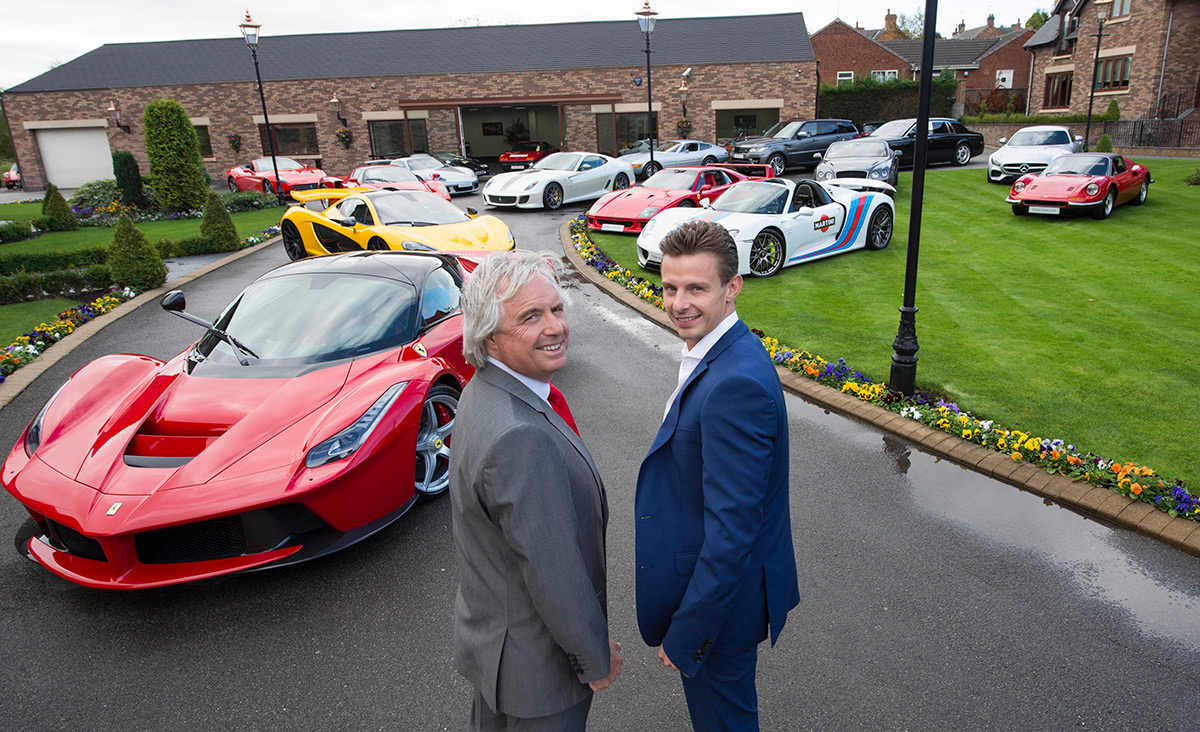 Soon the discussion turns to the ‘Tom Hartley University of Life’, his unorthodox methods of educating his children whereby he taught them everything he knew about buying and selling rather than sending them to school. “I gave my children an opportunity and they took advantage of it, and so they should. Everybody criticised me 30 years ago, but it’s all changed now. That was my vision.

Occasionally Tom doesn’t answer a question. What will he do when he does retire? I don’t think he wants to think about it. Instead of answering he will go back to the name he has built up and his life choices. Tom Hartley is an immensely proud man. He’s proud of what he’s achieved and he’s proud of how he’s gone about it.

He’s also fascinated by how everyone is different, how different people will complete the same tasks, something he’s been interested in since he was told he was dyslexic many years ago. You will not meet another man like Tom Hartley and that’s meant in the best possible way.

Tom Hartley is unique and that’s partly why the business is such a success.

Cheshire Classic was the first stop on the trip: Read