Top-of-the-range Ferrari SF90 Stradale is the brand’s most powerful model yet, with hybrid technology and a V8 engine boosting power to 986bhp 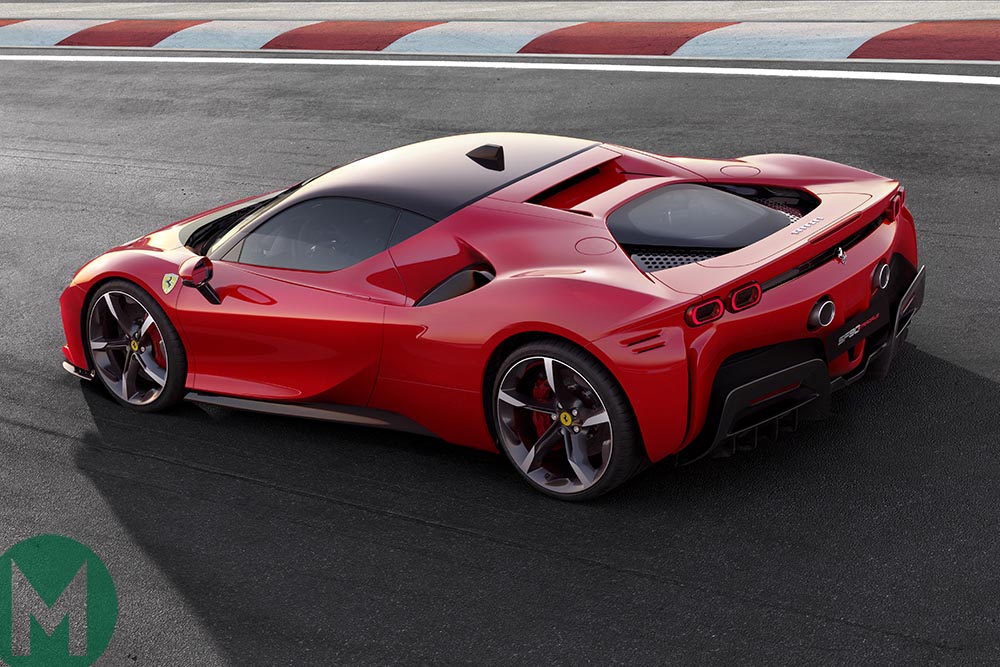 The company has unveiled its latest model: the 986bhp SF90 Stradale supercar that’s said to “point towards the future”.

It includes sophisticated aerodynamics, advanced electronics and more power than any of its previous cars, including the £1m LaFerrari.

It also happens to be a plug-in hybrid…

On the face of it, the SF90 Stradale follows a similar formula to a hybrid F1 car: a smaller engine, (V8 rather than the V12 of previous range-toppers), quieter performance – thanks to an all-electric mode – and much-improved fuel economy.

But the key for buyers is the 217bhp performance boost that the electrical system provides, which is said to be based on F1 technology, and is an improvement on the LaFerrari’s hybrid system.

Power from the four-litre V8 engine – the most powerful ever built by Ferrari – is supplemented by an electric motor that drives the rear wheels. There is also a motor on each of the front wheels, making this a four-wheel-drive car.

Cornering speeds should be improved too; fitting a motor on each wheel enables torque vectoring, so power to each side can be tweaked for maximum traction when accelerating out of bends.

The car can be plugged in to fully charge the 7.9 kWh lithium-ion battery (with a charging point opposite the filler cap), and the battery is also topped up on the move, by recovering energy that would normally be lost under braking, as well as using surplus power from the engine that’s not needed to drive the wheels.

Named in commemoration of the 90th anniversary of the foundation of the Scuderia Ferrari racing team, and sharing its name with this year’s Formula 1 car, the SF90 uses an all-new chassis with carbon fibre and aluminium elements.

It’s designed for the track, with an aerodynamic package that includes an active rear wing flap that increases downforce in response to speed, acceleration and driver inputs; wheels that suck air from underneath the car; and two diffusers ahead of the front wheels.

Hot air from the front radiators is channelled away from the air intakes in the middle of the car, and the hybrid system will continue to recover energy under hard braking, when the ABS system is activated – preserving more battery power for faster lap times.

A qualifying mode enables you to set a Q3-style lap time on full attack, by making the maximum use of the battery, which depletes quickly, so it can only be used for a limited time.

But hybrid technology also makes the SF90 Stradale neighbour-friendly, with the ability to drive for up to 16 miles on electric power alone, enabling you to make an early start without waking up your street.

There’s no reverse gear: only the front motors are used to drive the car backwards. Ferrari claims that the car will always retain enough power to reverse.

The cost of being a hybrid supercar pioneer will not be cheap: Ferrari has confirmed that it will exceed the £220,000 price of the V12-powered 812 Superfast, but it won’t reach the £1m heights of the LaFerrari.

There remain references to Ferrari’s past, such as gearbox controls arranged in an aluminium grille that resembles the gate on old manual cars, but the SF90 Stradale is a car that Ferrari is openly touting as the brand’s future — and it involves plugging in.