The 2017 Porsche 911 GT2 RS is brutally powerful and brutally expensive. But that fades into insignificance when you compare it to the hypercars on offer today, says Andrew Frankel 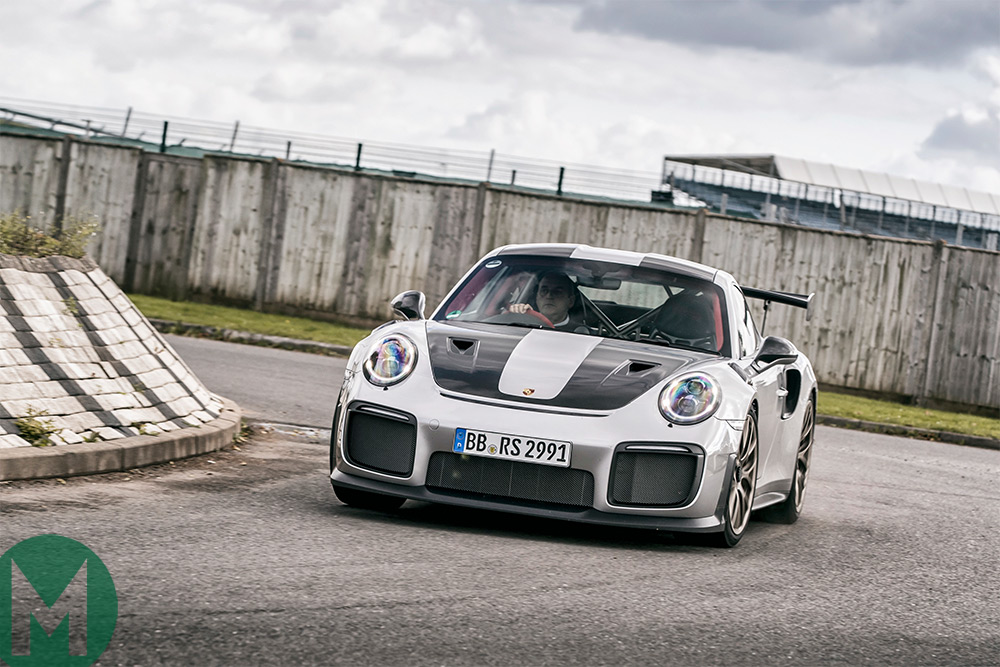 If you want to feel how fast is the new Porsche 911 GT2 RS in a straight line, I have an idea that may help. The good news is that it doesn’t require you to borrow a GT2 RS, which is just as well because, at the time of writing, there are precisely none in the country.

All you need in fact is any half decent, modern car, a long straight road, a decent surface, and the certainty there are no other road users around to be in the least bit inconvenienced or endangered by what you’re going to do next.

Drive at around 60mph and then hit the brakes as hard as you can – really give that ABS a workout. I’m sure we’ve all done emergency stops before, but we don’t really focus on the forces involved because we’re usually thinking about something else at the time: not crashing, for instance. Relieved of this intellectual burden you can concentrate entirely on the experience of being flung into your seat belt as hard as your ventilated discs can manage. It’s quite a violent sensation and that’s because, if your car has decent tyres and brakes, chances are you’ll be decelerating at greater than the force of gravity.

Rewind the experience in real time and you have an idea of how the GT2 RS accelerates.

But it’s not the craziest thing this car can do. While we’re in the mood to measure g-force, when I drove it on the Silverstone Grand Prix circuit it recorded an average of 1.6g in both left and right turns and did so on street tyres. Any road car that could pull just 1g laterally had a great deal of grip.

If g-forces were the only thing that the GT2 RS had to boast, it would still end up in the same category as every other GT2 I’ve driven: spectacular but not worth the extra outlay over the GT3 version or, in the case of the original 993-series GT2 of 1995, the very great 3.8 Carrera RS.

What you don’t expect when you approach this car, fully aware of its 691bhp output, its outright production car Nürburgring lap record and its monstrous aero pack and titanium roll cage, is to find anything in the least bit civilised – but it almost is.

I picked the car up in Swindon and made my way via a random two-hour cross-country route to Silverstone. On the way I discovered two things, one entirely expected, then other absolutely not.

It was no surprise at all to find that the performance was all but unusable. What I did not see coming was that this didn’t bother me at all. Be very suspicious of a review based on a public road assessment alone that claims to have scratched beyond the surface of the GT2 RS. Now, yes, I did know I had at least 10 laps of the full Silverstone Grand Prix circuit waiting for me and that would have helped, but the stuff I’d expected to get in the way simply wasn’t there. The ride was better than adequate; it was actually quite good for this kind of car. Noise levels at legal speeds were perfectly acceptable and I had the full range of Porsche navigation, music and climate refinement to keep me comfortable, entertained and on the right road.

But something still gnawed away at me, probably the memory of lightly damaging this car’s predecessor back in 2010 while failing to drift it past a photographer on a private airfield. With only 610bhp, that car was exceptionally spiky on the limit, especially when the turbos chimed in. What would this one be like with almost 700bhp?

It’s a pure and simple delight.

At Silverstone, everything else on the track became a mere obstacle, and there was some quick stuff there that day. But it was the balance of the chassis and the way the engine delivered its monster torque that I’ll remember most. Because it lets you control the power so minutely, once your head has acclimatised to the forces to which it’s being subjected, it’s actually quite an easy car to drive, at least compared to every other GT2 RS I’ve driven. That’s the reason, every bit as much as its extra power, that it’s over half a minute quicker around the ‘Ring than the last one. In all honesty, I’ve never felt a more confidence inspiring GT2, and confidence does wonders for lap times.

It sounds wonderful too with a deep, rude roar, unapologetically that of a forced induction flat six and not at all unlike a late 1970s 935 which, I am given to believe, is exactly what Porsche was trying to achieve.

So despite the fact it’s turbocharged, and can only be ordered with two pedals, I find myself concluding that for the first time, this is a GT2 RS I’d prefer to even the latest GT3 RS, itself a pretty wondrous machine. In short, it is the most exciting street 911 I’ve driven and one of the most exciting road cars, period. And yes, its £207,506 price tag seems quite high, but only until you consider all those hypercars costing nearly a million that wouldn’t even keep up with it around a decent track. In that context, it seems rather closer to a bargain.