The 1958 Argentine Grand Prix is rightly regarded as one of Moss’s greatest races, but until late in the day it had seemed as if Stirling would not even be taking part. 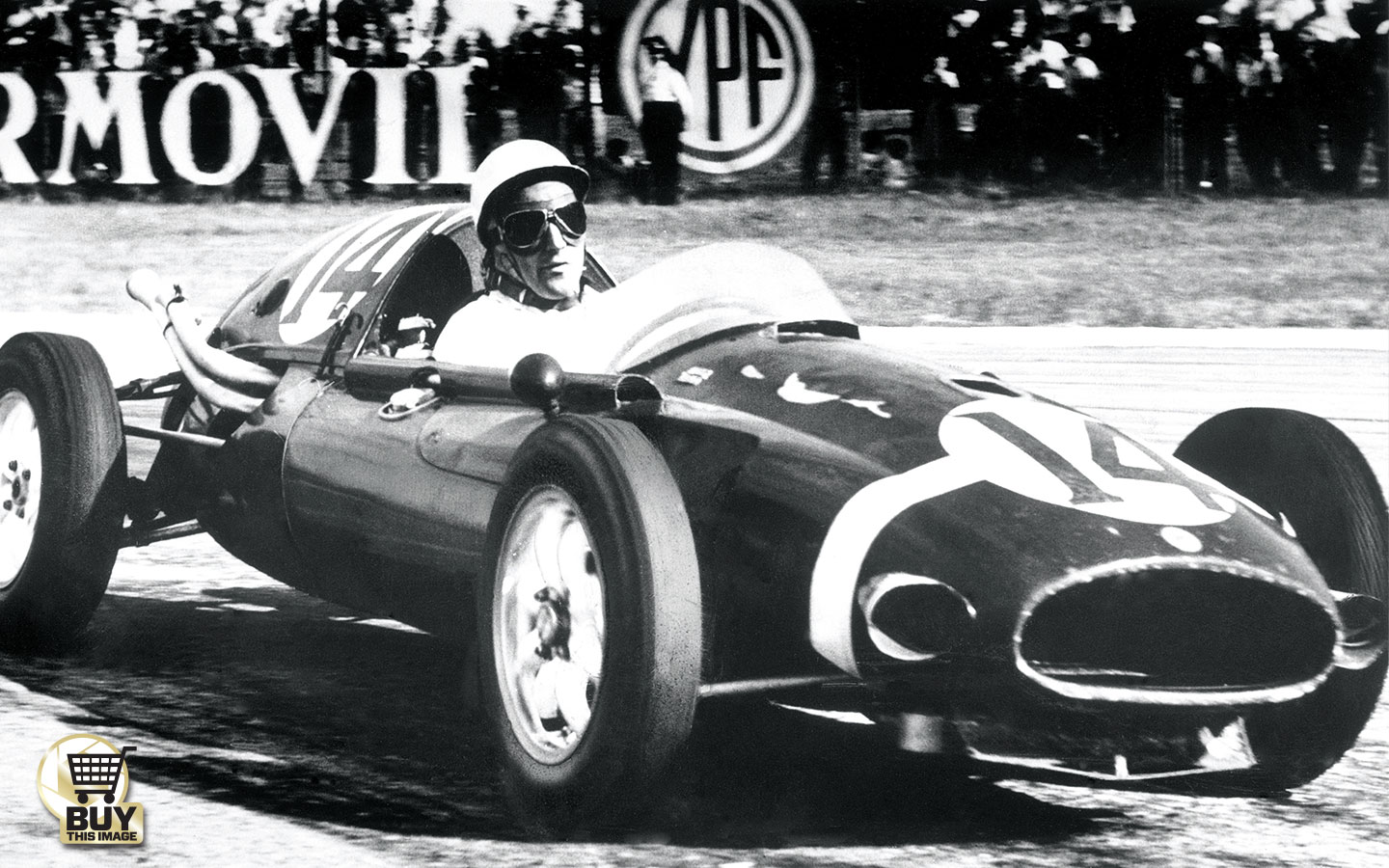 Over the winter it had been decreed by the FIA that henceforth Formula 1 cars should run on commercially available aviation fuel rather than the alcohol-based ‘dope’ fuels of the past. Vanwall, to whom Moss was contracted, and BRM declared there was insufficient time to modify their engines appropriately, and they would not be going to Buenos Aires.

Although Maserati had officially withdrawn from racing, half a dozen privately-entered 250Fs were entered, and Moss was offered one of the Scuderia Centro-Sud cars. This he didn’t fancy too much, so he approached Rob Walker, suggesting that his Cooper, with 2-litre Climax engine, be entered. Rob agreed, but declined to make the trip himself, a decision he was always to regret.

So late was this settled that the Cooper had to be flown to Argentina, which caused rather a sensation. Stirling being Stirling, the organisers were desperate to have him in the race, and the ‘starting money’ agreed allowed for the cost of transportation.

View the result on the Database

As it was, only 10 cars – three factory Ferraris, six Maseratis and the lone Cooper – took to the track for practice, and although Fangio and Behra were among the 250F drivers, Ferrari, with brand-new cars, were considered favourites.

That said, neither Hawthorn nor Collins nor Musso took pole position, that going – perhaps inevitably – to Juan Manuel, now in semi-retirement, but still as swift as he needed to be. Moss’s little Cooper, regarded with some derision, not least by Ferrari, qualified seventh.

If Stirling’s horsepower deficit were not enough, he had another problem, too, inadvertently caused by his wife: “Playing around with Katie on the Thursday night, her finger went into my eye, taking four millimetres off my cornea. A doctor gave me some pills to dull the pain, but I had to drive with a patch over my eye…”

Come the start Behra took the lead, but Fangio was soon by him, Hawthorn third and Moss fourth. By lap four, though, Stirling was in trouble, stuck in second gear: “The lever jammed solid, but just as I was about to stop, it suddenly freed itself…”

It had cost him 15 seconds or so, but quickly he began to catch up, at the same time concentrating on conserving his tyres, for the plan was to go through without a stop, impossible for his rivals. As the others went in, Stirling continued, now in the lead.

“I kept checking the tyres in my mirrors,” he said, “and with about 14 laps left I saw a little white spot – which got longer, and then became a continuous line. Both rears were down to the canvas, and I was worried about a burst, and kept on the oily, rubbery, bits of the track. Couldn’t come in – Musso was catching me…”

In the pits Moss’s mechanic, Alf Francis, made a show of preparing more tyres, counting Stirling down to his stop, and the subterfuge worked a treat. By the time it dawned on Ferrari that he was not stopping and Musso was given the signal to go all out, it was too late: at the flag Moss, completely drained, was 2.7 seconds to the good, having caused one of the greatest upsets in racing history. NSR 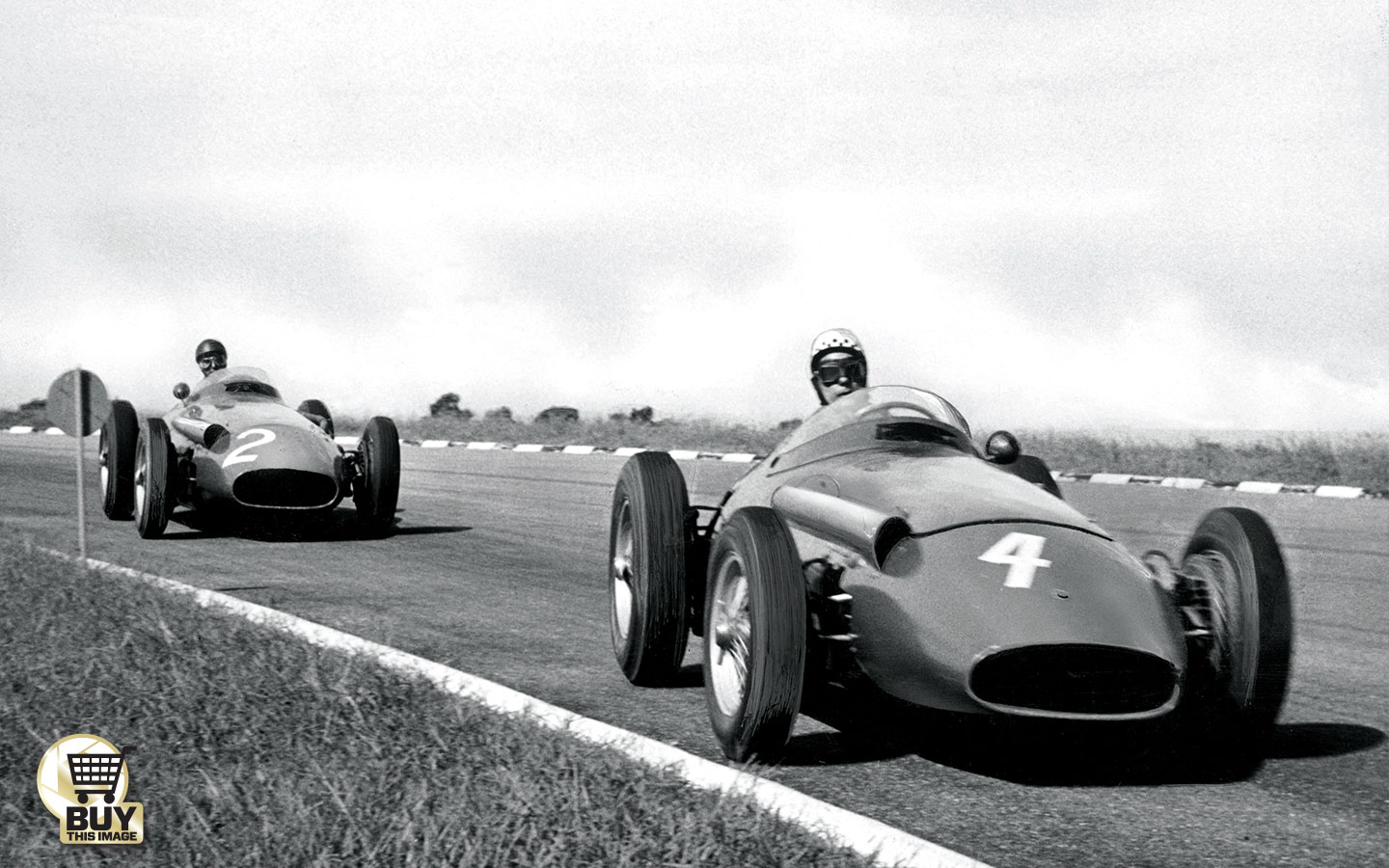