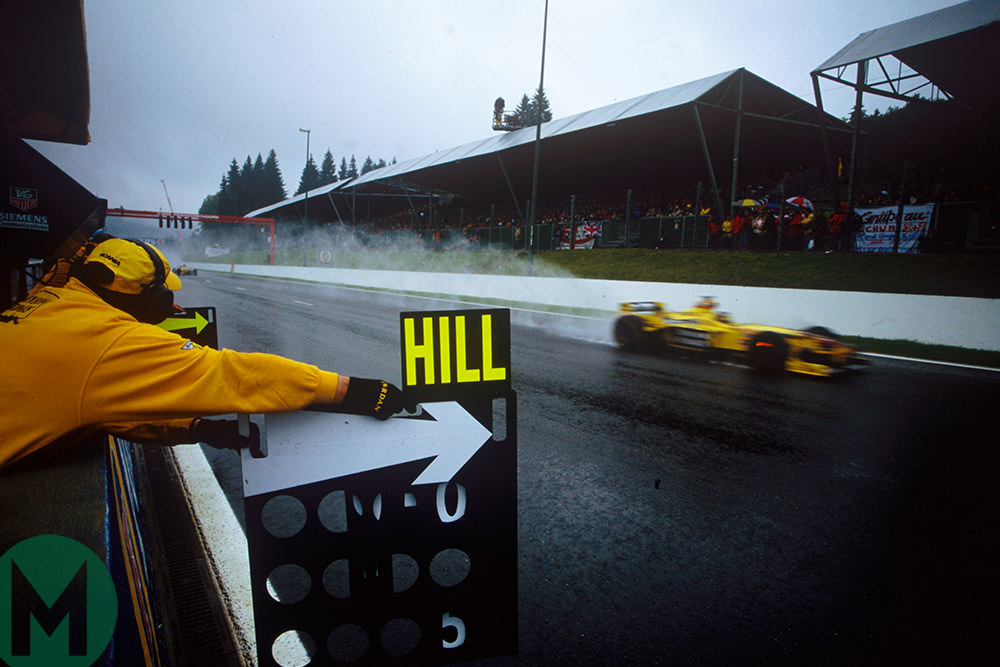 The memory remains so fresh that it seems inconceivable 20 years could since have passed, but the Gregorian calendar rarely lies. On paper it looked set to be a fairly routine race by the standards of the day, with the McLarens of Mika Häkkinen and David Coulthard on the front row, separated from closest rival Ferrari by Damon Hill’s well-driven Jordan, but few would have predicted the manner of the race’s evolution within the opening 20 seconds.

And the media, unusually, had a grandstand view.

Modern tradition dictates that Formula 1 writers are placed in well-appointed rooms that are awash with TV monitors but often afford no view of the track. (For those that recall the short-lived Korean Grand Prix, the media centre overlooked a proposed marina that was never built – there was no evidence of a racetrack and you could just as easily have been in Yeovil as Yeongam.) But it wasn’t always thus. If you picked the correct desk, the old press room at Spa allowed you to watch cars most of the way from the exit of La Source to the tip of Raidillon – rather better than the current version, which looks out over trucks in the upper paddock – and in 1998 that was the place to sit.

Conditions were as wet as only Belgium can be when the race began and, as drivers exited La Source and set off downhill, Coulthard received a nudge (most likely from Eddie Irvine, though it was hard to be certain). The Scot’s car turned sharp right into the barrier, lost a wheel and rebounded into the path of a wall of spray containing about 20 cars. “I could see David and a bouncing wheel coming across the track in front of me,” said Hill. “I kept my foot down and went for a gap.” He found one and came through unscathed – but that put him very much in the minority. In his immediate wake, the cars of Coulthard, Irvine (Ferrari), Rubens Barrichello (Stewart), Johnny Herbert (Sauber), Mika Salo (Arrows), Pedro Diniz (Arrows), Alexander Wurz (Benetton), Jarno Trulli (Prost), Olivier Panis (Prost), Tora Takagi (Tyrrell), Ricardo Rosset (Tyrrell) and Shinji Nakano (Minardi) were strewn across the circuit in various states of disrepair. Ralf Schumacher’s Jordan was in the middle of it all, too, but had somehow managed to avoid hitting anything while at the same time not being hit. These had been among the most profitable few seconds of racing the carbon fibre industry had known.

The race was red-flagged and restarted almost an hour later, whereupon world championship leader Häkkinen immediately spun into retirement at La Source (a gentle nudge from Michael Schumacher might have had something to do with it) and gifted Hill the lead… at least until lap eight, when Schumacher’s customary wet-weather prowess (not to mention a faster car) translated into an inevitable lead that could lead only to one thing: victory and a place at the head of the points table.

On lap 24, the German came up to lap Coulthard, who had taken the restart in McLaren’s spare car – remember those? The Scot couldn’t see him in the spray but the team had been on the radio, alerting him to keep out of the way. Next time around, on the downhill run towards Pouhon, he eased his pace to allow Schumacher through… and the Ferrari smacked straight into the back of him.

Schumacher made it to the pits minus his front left wheel, leapt from his car and – his face by now an approximately Ferrari shade of red – headed for Coulthard’s pit. McLaren’s team co-ordinator Jo Ramirez recalled: “Michael was yelling, ‘You tried to kill me!’ but as far I as was concerned the accident was totally his fault. He just drove into the back of David.” Team members dragged Schumacher away before the situation escalated – although Coulthard had a decisive advantage in the event of a scuffle. He still had his crash helmet on. “Michael would have broken a hand with his first punch,” he said. Later, he acknowledged that he’d have done things differently if a similar situation arose again. “Michael’s reaction was that I’d brake-tested him,” he said, “but the stewards looked at the data and I hadn’t braked. The reality is that I lifted to let him through, but I did so in heavy spray on the racing line and you should never do that. The minute the team told me he was there, I should have made a smarter decision.”

That handed the advantage to Hill and Schumacher Minor, now running first and second for Jordan – a team seeking its maiden victory in its 126th Grand Prix. The German closed in as the race drew towards its end, but was ordered to hold station to ensure the weekend ended on a victorious note. It concluded a remarkable rise for a team founded on little more than a wing and a prayer eight years beforehand.

It was Hill’s 22nd F1 victory – and his first in anything other than a Williams. On the podium, his face was the very essence of rapture, although the elegance of the moment was slightly lost because he had a strip of tank tape gummed to his left ear. Ralf? He looked suitably grumpy – though at least he had the good grace not to throw a punch at anyone…