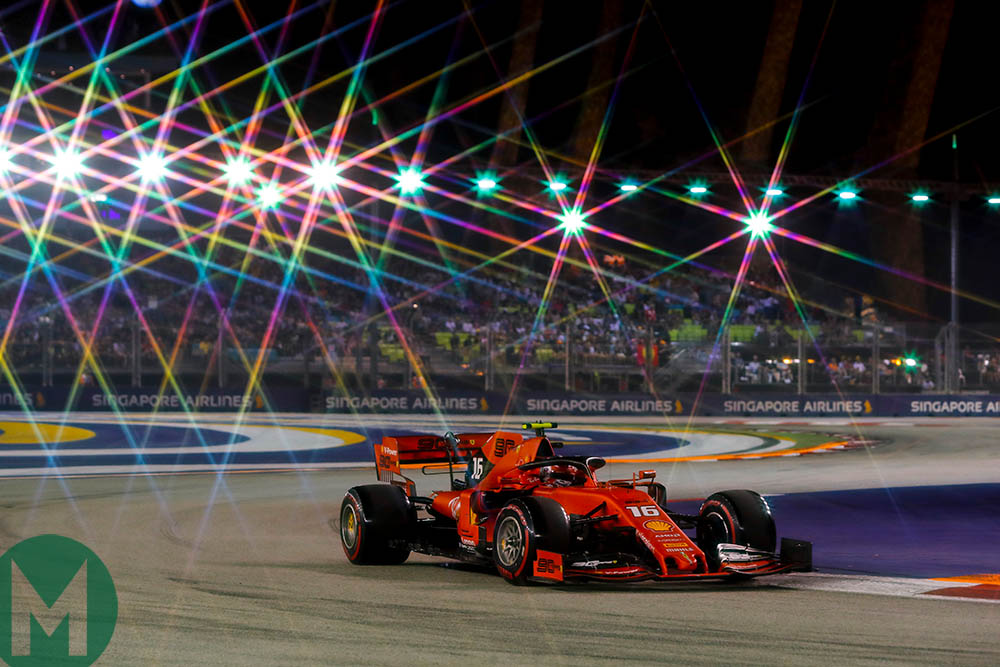 It might be a bit premature but you can’t help wonder if there has just been a seismic shift in the balance of power in Formula 1. Up until the summer break the narrative was all about Mercedes and Lewis Hamilton; now, it’s all about Ferrari and Charles Leclerc.

Leclerc, of course, came to Marina Bay riding the wave of those back-to-back victories in Spa and Monza. After digesting that he’d won in a Ferrari at Monza at 21, he spent a couple of days at home and then went to Maranello to be feted by the whole workforce.

But his feet were still firmly on terra firma. “No,” he said, “I haven’t bought myself any special gifts. And I read somewhere that I had a celebratory tattoo, but I didn’t…”

Leclerc also denied seeing himself as the Ferrari No1 after winning those races and somewhat controversially failing to give Sebastian his second Q3 run tow at Monza.

“Inside the team, it’s very balanced,” he claimed. “There’s been situations where I’ve helped Seb, and ones where he’s helped me. At Monza in qualifying nothing worked and it was a big mess. Being a team player pays off in the end and I don’t think it’s changed. There were some doubts about what I did, but I explained myself.”

Basically, he had no problem giving Vettel his tow on that second run, provided he got one himself, but the debacle meant that nobody else was affording him one.

As far as his elbows-out race defence was concerned, he was clear: “Since Austria (and the race incident with Verstappen), I’ve changed my approach.”

Could Vettel hit back? After his disastrous Monza race, which furthered a poor run, he denied any crisis of confidence over that or Leclerc.

Nobody had been unduly surprised by Ferrari wins on high-speed circuits like Spa and Monza, even if they’d been highly impressed by Leclerc’s execution, but Marina Bay was a different kettle of fish. Mercedes superiority in slow-speed corners has been well documented. Lewis Hamilton is an absolute ace around Singapore – to be fair, where is he not? – and Red Bull with Max Verstappen was also expected to be bang on the pace.

Ferrari, everyone thought, might struggle. Not only that but Vettel, pole man at Marina in 2011, ’13, ’15 and ’17 is also pretty special around here. The combination of the two would surely burst the Leclerc bubble. Wouldn’t it?

On Friday, the story followed the script. The first two sessions of free practice finished with Hamilton and Verstappen at the top of the time sheets, separated by 0.18sec. Vettel’s quickest Ferrari lap was eight-tenths away and Leclerc, troubled by a gearbox problem and unhappy with the balance, was a further 0.4sec away, sixth.

But then, on Saturday morning, data from the running of new Ferrari aero components fully analysed and balance changes made, Leclerc was much happier. At the end of FP3, there he was, quickest by a couple of tenths from Hamilton and more than half a second clear of Vettel. Suddenly, we had the genuine prospect of a three-way pole battle. 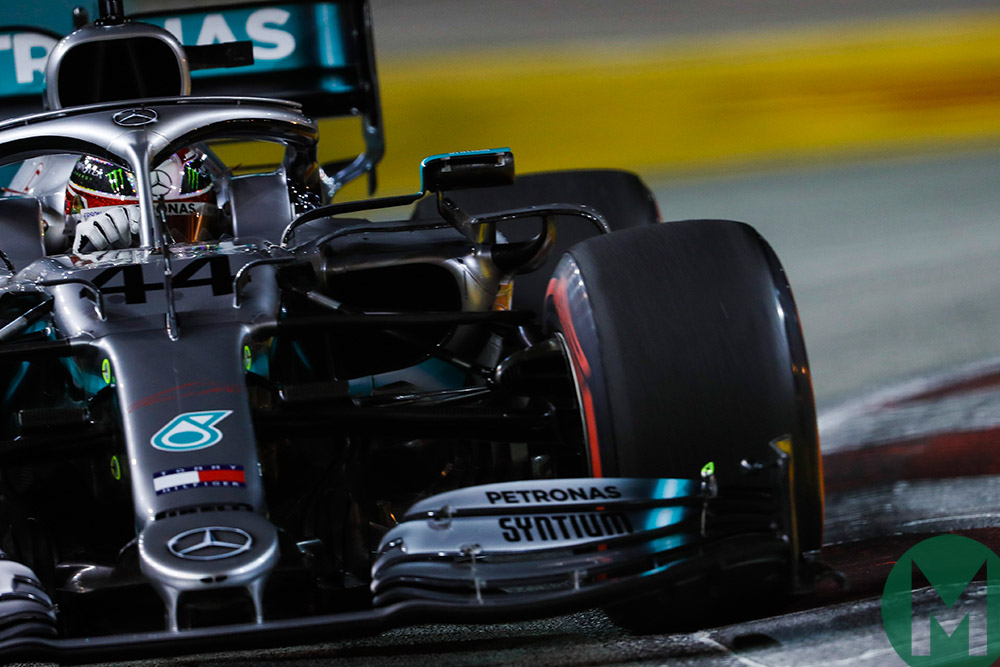 A look at performance data from GPS traces on Friday didn’t hold too many surprises. The Ferrari was losing almost half a second to Mercedes in slow corners, about half as much in the medium speed stuff, and clawing some time back in sector 1, the power section.

In qualifying proper, the sector one advantage over Mercedes and Red Bull was still there but the Ferrari was now much closer in its previously weaker sectors. After the Mercedes had comfortably headed Q1, by the end of Q2 we had:

There was now genuine belief on the faces of the Ferrari crew.

Could Vettel hit back? After his disastrous Monza race, which furthered a poor run, he denied any crisis of confidence over that or Leclerc.

“First, let’s be fair and say that he’s very quick. Then there’s been some sessions, like Austria and Germany, and…” cue wry grin, “…half of Q3 in Monza I guess, where I haven’t really taken part. I don’t think it’s anything mental. I’m doing the right things, but here and there I might not have absolute trust in the car, but it’s improving and hopefully will click and fall into place.”

After a mighty first Q3 run, it seemed to have done just that. Vettel stopped the clock in 1min 36.437sec to take provisional pole and Leclerc was a quarter of a second away, with Hamilton and Verstappen still in the picture. It was all about the final run.

Vettel ran first on a clear track, spun up the rears a bit too much out of Turn 3 and then had a big, lairy slide out of Turn 14, after which he abandoned the lap, frustrated.

Leclerc, giving everything, beat his Q2 and first Q3 run by almost half a second to take his fifth pole of the season – one more than Hamilton and Bottas — and the third in succession, leaving both Vettel and Hamilton looking a bit shell-shocked. 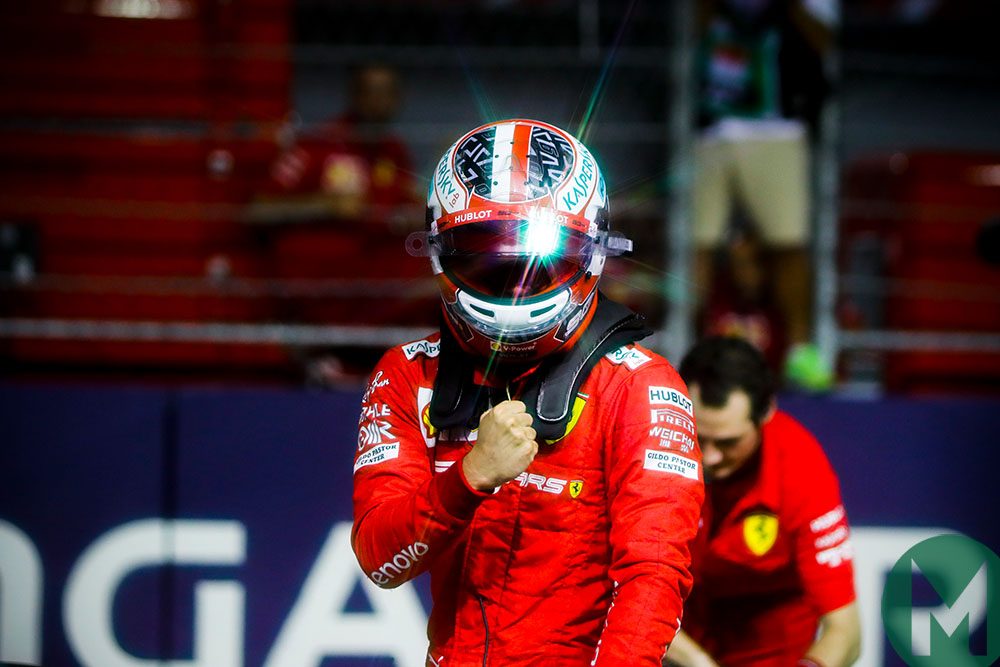 The Ferrari crew and Charles were ecstatic. “There were some moments where I thought I’d lost the car but the team has done a great job to bring the package that we needed. The bits worked properly even if I had a tough Friday and the car didn’t feel comfortable.”

Team principal Mattia Binotto admitted, “It was even better than we thought and the new aero package was in the right direction and that should help us next year. I still believe we need to close the gap in some areas but this and the last two races are a big boost, even if the race is tomorrow. Seb also did a fantastic first run and proved he can be very fast. It’s a matter of confidence.”

Hamilton admitted he’d given it absolutely everything, even touched the wall a couple of times, had split the Ferraris but was still looking at a couple of tenths deficit to Leclerc. There was a grin: “Tomorrow we can be aggressive…” A message?

Verstappen, fourth and 0.6sec away, was a little downcast. “We were just lacking quali pace, I was four-wheel sliding and just wasn’t fast enough. It’s a bit surprising here after a competitive Monza.” 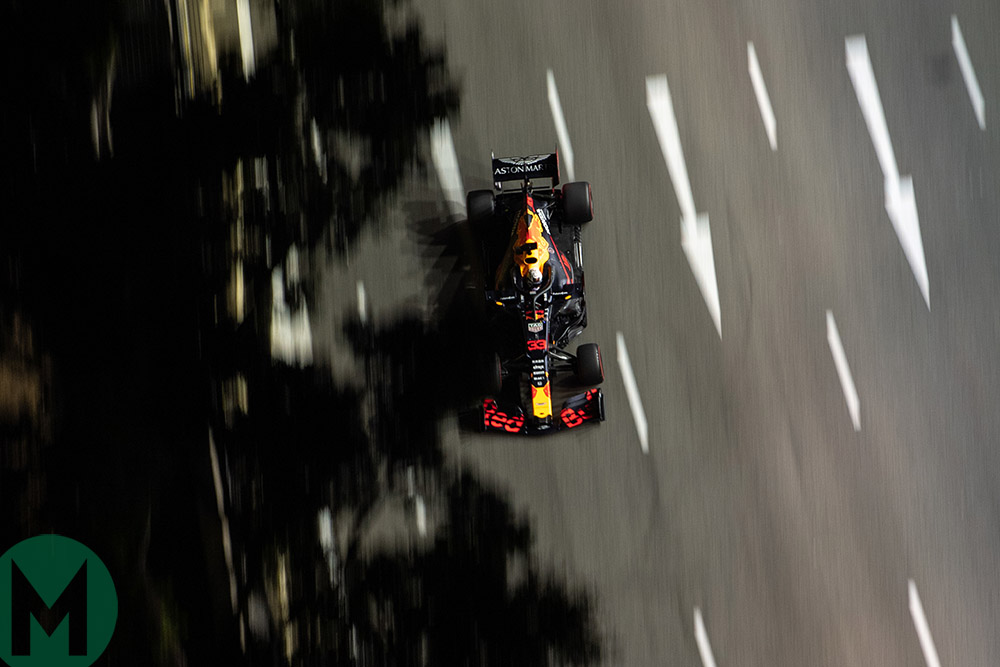 Fighting for fastest in practice, Verstappen slid down the rankings in qualifying Photo: Motorsport Images

Bottas starts fifth with the second Red Bull unable to take advantage of his travails.

Your task, Alexander, if you choose to accept it, is to go to the most physically demanding, hot, bumpy circuit on the calendar, which you’ve never seen before, keep it out of the wall and go head-to-head with Max Verstappen, who absolutely flies around there. Fancy that?

Whether Albon secretly did or didn’t, there were those ambitiously predicting that the Red Bull could give him his first F1 podium.

“Well,” he smiled nervously before a wheel had turned, “I’m not saying I don’t want it, but let’s not get ahead of ourselves. I’ll have a better idea by the end of Friday.”

In fairness, despite knocking the nose off, he was probably feeling relatively hopeful by then considering Ferrari hadn’t revealed its hand. The Red Bull simulator is pretty good, he admitted, but it’s still not the same as negotiating the bumps and walls. He ended up sixth, exactly 0.6sec from Verstappen so, while not spectacular, certainly didn’t let himself down. And it’s a long old race.

The stand-out novice lap was actually by Lando Norris in Q2, which was good enough for sixth, three-tenths clear of Albon. It also got team-mate Carlos Sainz’s attention! This is a man who has finished fourth in Singapore. You just can’t do that without an abundance of talent.

In Q3 though, it was Sainz who took best-of-the-rest honours and a frustrated Norris who ended up 10th, behind the two Renaults of Daniel Ricciardo and Nico Hülkenberg, three-quarters of a second slower than he’d gone in Q2.

Norris and Hülkenberg will move up the grid for the race start, as Ricciardo’s results were cancelled following the session. It was found that his Renault had exceeded the amount of electrical energy that it could deploy, so he will start at the back. 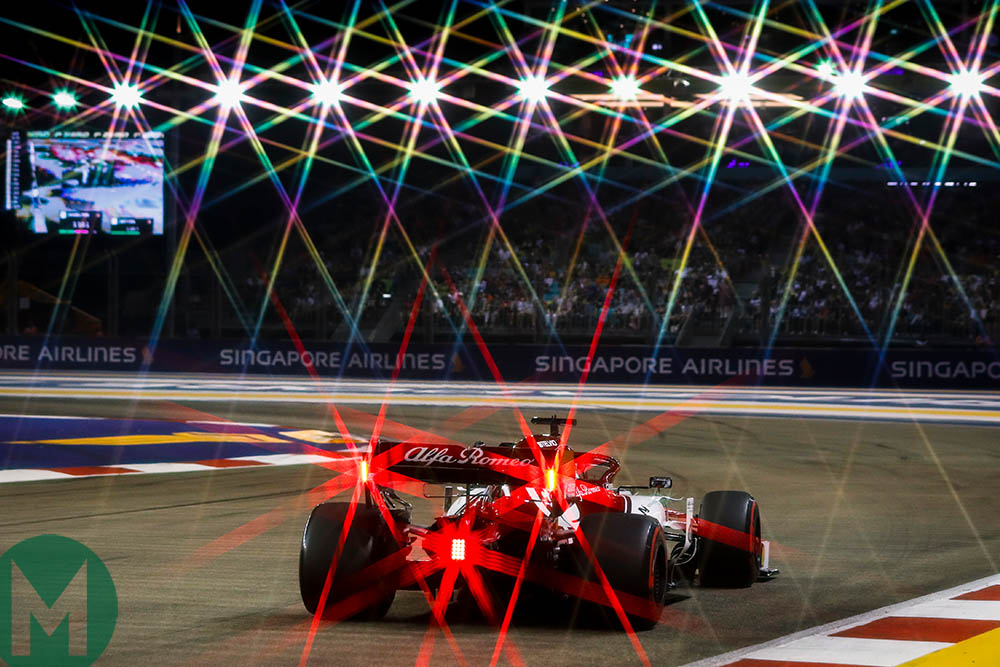 Renault’s 22-point haul in Monza cut McLaren’s margin over the French works team to just 18 points and was Renault’s best single-race result since Japan 2008. Bearing that in mind, Norris was probably doubly frustrated that the papaya orange cars had been split by both of their arch-rivals; at least until Ricciardo’s penalty was announced.

“I didn’t get the tyre warm-up right, I was a bit close to the car in front and so I didn’t quite have the confidence to push like in Q2,” Lando admitted. “But, halfway around the lap I was pretty level with that Q2 lap but then got brain fade, didn’t do enough downshifts and got a bad exit from the hairpin. I feel like a bit of an idiot. I’m not happy with it.” Nothing like candid honesty.

So, what will tomorrow bring? Trying to second guess Singapore, with its requisite soft-tyre management and random safety car deployments, is a fool’s game, but if Charles Leclerc can put it across Lewis Hamilton and Mercedes once more under those parameters, it will be truly, truly impressive.

Early in the weekend, Charles was asked if he thought Lewis was concerned about him?

“I don’t think Lewis is concerned,” he said. “He’s very strong mentally. In Austria (with Verstappen) I was surprised and I changed my approach. He might do that as well… He might be a bit more aggressive. The next few races will give us the answer, although this might not be the best track to see it.”

Then again, it just might. Turn One will be interesting, but Leclerc is a quick learner. He’s even going to have some water in the car this year after declining with Sauber last year and deeply regretting it. He might just need it! 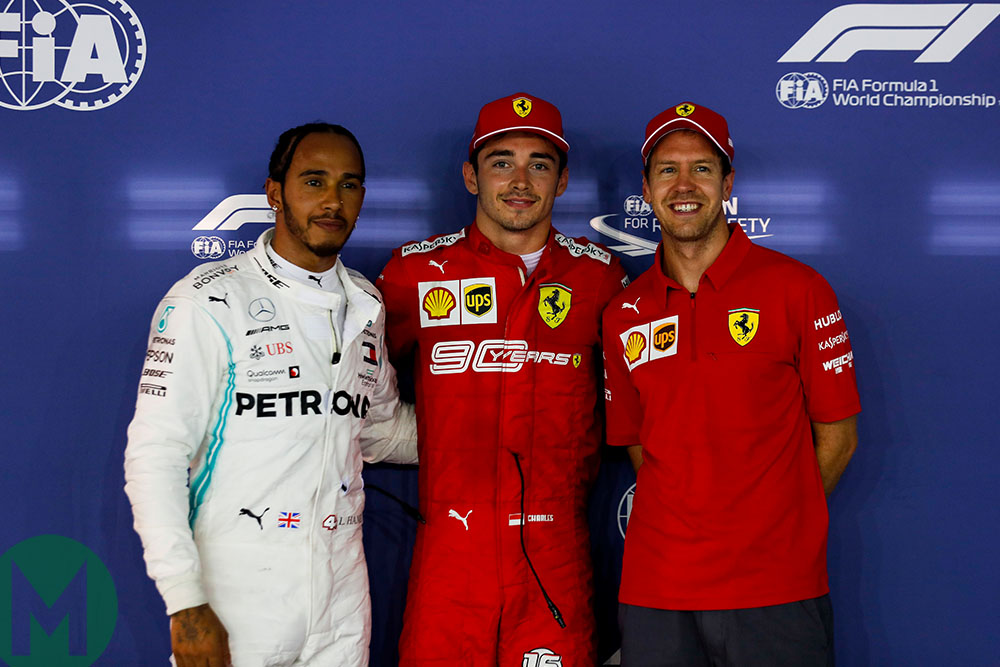 These results do not show the effect of grid penalties