2020 was a season where almost anything seemed like it could happen in Formula 1, but asking for a thrilling Abu Dhabi Grand Prix proved to be a little too much.

The ingredients were all there for a classic. Max Verstappen finally on pole position, Mercedes vulnerable but surely a threat, McLaren starting strongly but Racing Point with a very quick car and F1’s newest race winner Sergio Perez set for a charging drive from the back of the grid.

But it didn’t take long for one moment to pretty much erase all of the intrigue.

Perez had made his way through to 14th place in the opening eight laps and points were certainly possible for the Mexican in his final grand prix for Racing Point. After all, the reason he had started at the back was due to taking new power unit components, so he could push throughout…

And then on lap nine, an MGU-K problem meant Perez’s F1 career for the time being came to a premature end.

“It’s a bit sad, leaving the team this way,” Perez said. “Some of my boys were crying there at the end, I told them you just have to remember what happened last weekend.”

Words we could all heed based on what happened next. The virtual safety car wasn’t enough to clear the Racing Point so the safety car was deployed. Either way the majority of the field were pitting for hard tyres. With everyone’s stops made and no chance of an undercut or overcut, the battle was all but over at the front.

Verstappen had shown in those opening nine laps that he had the Mercedes pair covered, edging away to the tune of a couple of tenths per lap. Valtteri Bottas similarly gapped Lewis Hamilton enough that he didn’t look under major threat from his team-mate, who said: “That doesn’t feel like a good strategy” after the top four ran in a line on the restart.

Alex Albon had jumped Lando Norris in one of the only bits of action prior to the interruption, and behind him Daniel Ricciardo ran fifth having started on the hard tyre. Norris was now down to sixth but safe in the knowledge he would jump Ricciardo when his future team-mate stopped if there was no further drama, while Carlos Sainz soon climbed ahead of the two Ferraris – both inexplicably staying out during the safety car period – to strengthen McLaren’s hopes of snatching back third in the constructors’ standings.

If there was any drama, it was involving Sainz, who was under investigation for slowing unnecessarily in the pit lane. With so many cars pitting under the safety car, the majority of teams were stacking both drivers and Sainz had slowed in front of Lance Stroll, who didn’t manage to jump ahead of the Spaniard.

“I don’t think there’s any issue to be honest,” Sainz said. “I was trying to be as safe as possible with the chaos that was in the pit lane. Cars coming out, in, I haven’t done anything that we’ve not done before in a lot of races so I don’t really get the investigation.”

What many observers didn’t get was that the investigation would take place after the race, with the stewards later revealing it was due to telemetry they wanted to view that wasn’t available. In the end it wasn’t particularly necessary as Stroll faded after struggling to pass Sebastian Vettel and then lost out to Esteban Ocon on the final lap to finish tenth.

With Norris fifth and Sainz sixth, the 18 points scored by McLaren comfortably overturned the ten-point deficit to Racing Point to secure third in the standings, while Sainz was then cleared of any wrongdoing to confirm the result.

And the result it confirmed was a dominant Verstappen win. After the safety car he simply eased away, and Mercedes had no answer. MGU-K concerns may have played a part for Mercedes as the engines were turned down slightly as a precaution, but in clear air with a quick car, the Red Bull driver was never letting this one slip.

“It was an enjoyable race,” Verstappen said. “We had a decent start and from there onwards could manage the gap and could look after my tyres. Then of course the safety car came out at a little bit of an unfortunate time I think, because then we had to a very long stint on the hards. Luckily, the tyres coped with it but still had to manage it a bit more. But the car was really good today, and just a good balance, so you could really look after the tyres and I could just build a gap all the way through the race.

“Just a bit of vibration on the tyre [was the only concern]. I was thinking back to Spa and a little bit in Imola, but I was keeping an eye on it on every straight. But luckily it was all good. The pace was still there and the tyres were still performing.” 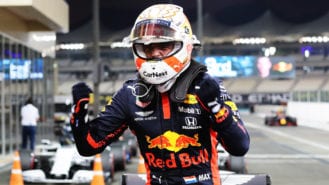 Lewis Hamilton was back and after an enticing insight into F1 at the sharp end, poor George Russell, last weekend’s story, was back down to earth with a bump. Back…

Bottas wasn’t a concern for Verstappen as he didn’t spend a single lap within DRS range, although if history is anything to go by Red Bull should perhaps be wary of the response from Mercedes in 2021.

“I noticed pretty early on in the first stint that Max and Red Bull had more pace,” Bottas admitted. “For sure it was a surprise, we expected the race pace to be pretty much identical, but it wasn’t the case today. Obviously I’ve had much worse races this year so, you know, in this kind of season this was one of the good ones for me, but at least it was nice and clean, the start was good and everything.

“It could have been a worse way to end the season and, actually if we think about the big picture, knowing this team, being beaten by Red Bull in the last race of the season, for sure it motivates us even more to work over the winter, for next year, to make sure this doesn’t happen again.”

The Finn dropped over 15 seconds back by the flag but had Hamilton covered throughout, responding when his team-mate tried to close the gap as Albon did the same and ended up 1.5sec adrift to the podium.

“It’s not very easy to overtake through this circuit and I think it showed, we were all relatively close to each other, apart from Max,” Hamilton said. “He pulled away, but even Alex was right behind me. It shows the strength that they had today. I made it through and still finished off relatively strong in terms of consistency, not making mistakes in the season. I’m glad it’s done.”

And the reason he was glad the race was over was due to his physical state, in his first race back under 14 days after testing positive for Covid-19 in Bahrain. 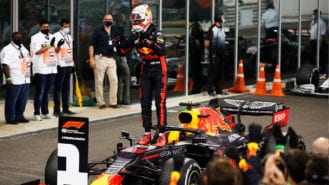 Max Verstappen claimed his second win of the 2020 Formula 1 season, bringing the year to a close by leading every lap of the finale. Mercedes had nothing for the…

“Covid is no joke. I never ever thought it was from the get-go this year and I knew that if some stage I got it then it would be tough because there are people out there losing their lives so I know it’s serious. I always found it very strange when you see world leaders laughing it off like it’s nothing…

“I’m destroyed. I do not feel good. I don’t feel good but I’m happy, I’m grateful, I’m alive and I live to fight another day. And I still managed to finish off the season with a podium so I’m thankful to the team that I can contribute.”

Albon’s pace in the closing stages was good but not quite enough to make it a fairytale day for Red Bull. And then the extra point for fastest lap went Ricciardo’s way as he signed off from Renault with a flat-out final lap.

Aside from Sainz, the rest of the drivers signing off had days to forget. Daniil Kvyat missed out on points in 11th and Vettel ended up 14th – one place behind Charles Leclerc – as Ferrari’s strategy failed. Kevin Magnussen was limited to 18th before his switch to IMSA, and Perez was the only retirement.

Perhaps the tendency for 2020 to deliver thrilling races plays a part in the underwhelming feeling that Abu Dhabi provided, but it’s a stunning achievement that this was round 17 of a world championship in such a challenging year.