Lewis Hamilton predicted Imola was going to deliver a boring race, and for 48 laps he was generally right. But it’s not just overtaking that leads to excitement and the trigger for a dramatic conclusion turned out to be a Red Bull tyre.

It was a race that fell into Hamilton’s lap but it was also one that allowed him to demonstrate one of his most crucial – although admittedly not glamorous – strengths.

Starting from second, Hamilton’s getaway wasn’t good enough to withstand the threat of Max Verstappen, who instantly picked up the slipstream from Valtteri Bottas and pulled ahead of the championship leader. At that point it really looked like game on, with Bottas leading but Verstappen able to stick with the Finn and Hamilton not able to get close enough to attack from third.

But the reason Verstappen could follow Bottas so closely soon became clear. Sebastian Vettel had tapped Kevin Magnussen into a spin on the opening lap at Tosa, and in turn damaged his own car. A bit of the Ferrari was sitting on the track and when Bottas came round again a lap later he cleaned it up.

“It was on the racing line and I didn’t have time to react, there was that big piece of carbon,” Bottas said. So, I decided and what I had time to do was to, at least, aim at least on how to hit it, so I went straight over instead of going over with one of the tyres and possibly getting a puncture.

“But, unluckily it got stuck under the floor and apparently it was 15 points of downforce, which in lap time it’s quite a big chunk.

“How it affected the car, I would say it made that in some corners I could feel the car sliding a bit and in some braking it was a bit unpredictable, so sometimes I would lock the wheels and sometimes it was stopping pretty quickly, so it was not really consistent the downforce I had in the car.” 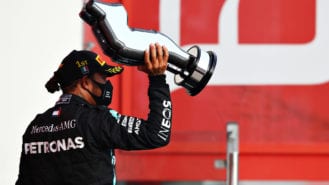 Lewis Hamilton has cast doubt on his Formula 1 future, moments after securing a seventh Constructors' Championship for Mercedes with a win at Imola. The victory extends his lead in…

Mercedes estimate that cost Bottas around 0.75sec of lap time, and that was the first bit of fortune that fell Hamilton’s way. Overtaking was clearly going to be extremely difficult so, in order to at least maintain track position, Verstappen pitted early to cover off an undercut from Hamilton. As the leader, Bottas responded to protect his lead but that left Hamilton in clear air and Verstappen stuck behind a slow, damaged car.

“I thought I would get a better start today but it didn’t turn out the way I would have liked and I fell to third,” Hamilton said. “My next strategy was to try and get by the Red Bull but it was just impossible to get close and in trying to get close I was killing the front tyres. So I backed off and just tried to keep within distance.

“Then Max stopped much earlier than I thought he would and Valtteri stopped to cover him and there was no way I was doing the same. Naturally, at the beginning of the race we get given a bunch of different options of strategy and I understood that if I was in that position the only way to do something was to do something different – to extend as long as I could. But I didn’t know how long that tyre would go.”

The medium tyre would go long enough thanks to that often unsung talent of Hamilton for finding the sweet spot where tyre wear is minimised while pace is maintained. He had built up a lead that was big enough to allow him to pit and emerge ahead of his two main rivals while Bottas struggled. But as he hit traffic, that was starting to look a little less certain. Then the racing gods smiled on him once again as Esteban Ocon coasted to a halt with a suspected gearbox issue and the Renault sat stricken near Variante Alta.

A virtual safety car was needed to push it off the track, and it was deployed just before Hamilton reached the pit entry. Thirty seconds later he was leaving the pits and the VSC ended.

“The start was good, I got Lewis, then I was trying to stay with Valtteri,” Verstappen explained. “We both pitted – I tried to do the undercut – and then he had damage on the floor so we were losing a lot of lap time. I couldn’t get close, this track is so hard to pass, and then of course Lewis jumped us.”

Still, Verstappen put pressure on the ailing Bottas and regular lock-ups at Rivazza hinted at the difficulty the Finn was facing. Eventually he went too wide, and despite brake-checking Verstappen at the final corner, the Red Bull was through with DRS. It looked like a cruise to second from there as he instantly matched Hamilton’s pace, until 15 laps to go.

“Once I got past Valtteri I think the pace was good, the car was feeling quite good and suddenly on the straight I lost the car because there was a tyre blowout. So I don’t know exactly what happened but when I looked at the car there was nothing broken on the car.

Traffic was such a big factor that Sergio Perez had climbed to third at that stage, having started 11th on the medium tyre. Running longer than those on the softs promoted him, but Magnussen doing the same – after his clash with Vettel – held up Daniel Ricciardo, Charles Leclerc, Alex Albon, Daniil Kvyat and the McLarens behind. 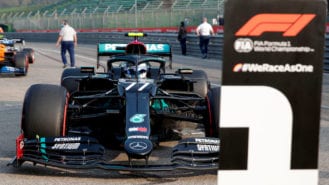 Polesitter Valtteri Bottas says he's expecting to be chased hard to the first corner in tomorrow's Emilia Romagna Grand Prix, with overtaking likely to be tricky at Imola

That had allowed Perez to pit and emerge ahead of all of them, but while the Mercedes pair could switch to softs under the safety car caused by Verstappen’s off, Perez did the same, inexplicably giving up track position and dropping to sixth.

“We were running P5 with roughly 15 laps to go, I think, and then there was the issue with Max, so that brought out the safety car,” Ricciardo said. “So I guess that put me in fourth on track, and then Perez pitted which obviously I was smiling about because I was ‘well, that’s given me third on track’ and I knew hanging on with the hard on the restart was going to be tricky but I was more than happy to fight for it at the end.

“Track position’s obviously very important around here so yeah, I think both myself and the team were very willing to keep me out on track. We held on. I think the threat at the end was Kvyat and that was very surprising. I wasn’t sure where he came from but I was told he was on the soft and he was coming on obviously very strong – but held on and just very, very happy.”

Following heartbreak for his team-mate Pierre Gasly — forced to retire from fifth early due to a coolant leak — Kvyat was the star of the closing laps. On fresh softs he jumped Perez and Albon on the race restart and then overtook Leclerc brilliantly on the outside at Piratella to take fourth. While Leclerc and Perez would come home fifth and sixth, Albon spun on cold tyres to end up 15th.

If that wasn’t painful enough, George Russell dropped it on cold tyres behind the safety car when tenth and on for the first points in his career.

As Russell dealt with that pain, the team that manages him — Mercedes — were at least otherwise occupied, celebrating a record seventh consecutive constructors’ championship. Hamilton might have had some luck on his way to victory, but there’s been nothing lucky about that dominance.