Probably only half joking, Bernie Ecclestone once proposed installing sprinkler systems around F1 tracks that would be turned on randomly to soak the surface and make things a bit more challenging.

Well, as Covid dictated F1’s return to Istanbul Park for the first time since 2011 we had a perfect storm of circumstances that produced just the effect that Mr E was seeking.

Combine recent resurfacing and oil still coming out of the bitumen with rain, add in the hardest C1/2/3 compounds in Pirelli’s range, add in track temperatures 10-15 degrees colder than anticipated, and it all added up to a skating rink. And in those conditions cars switch on tyres – well, up to a point – at different rates. Predicting the competitive order becomes a lottery. Witness the opening laps of the recent race at Portimao, which had a similar low-grip surface. 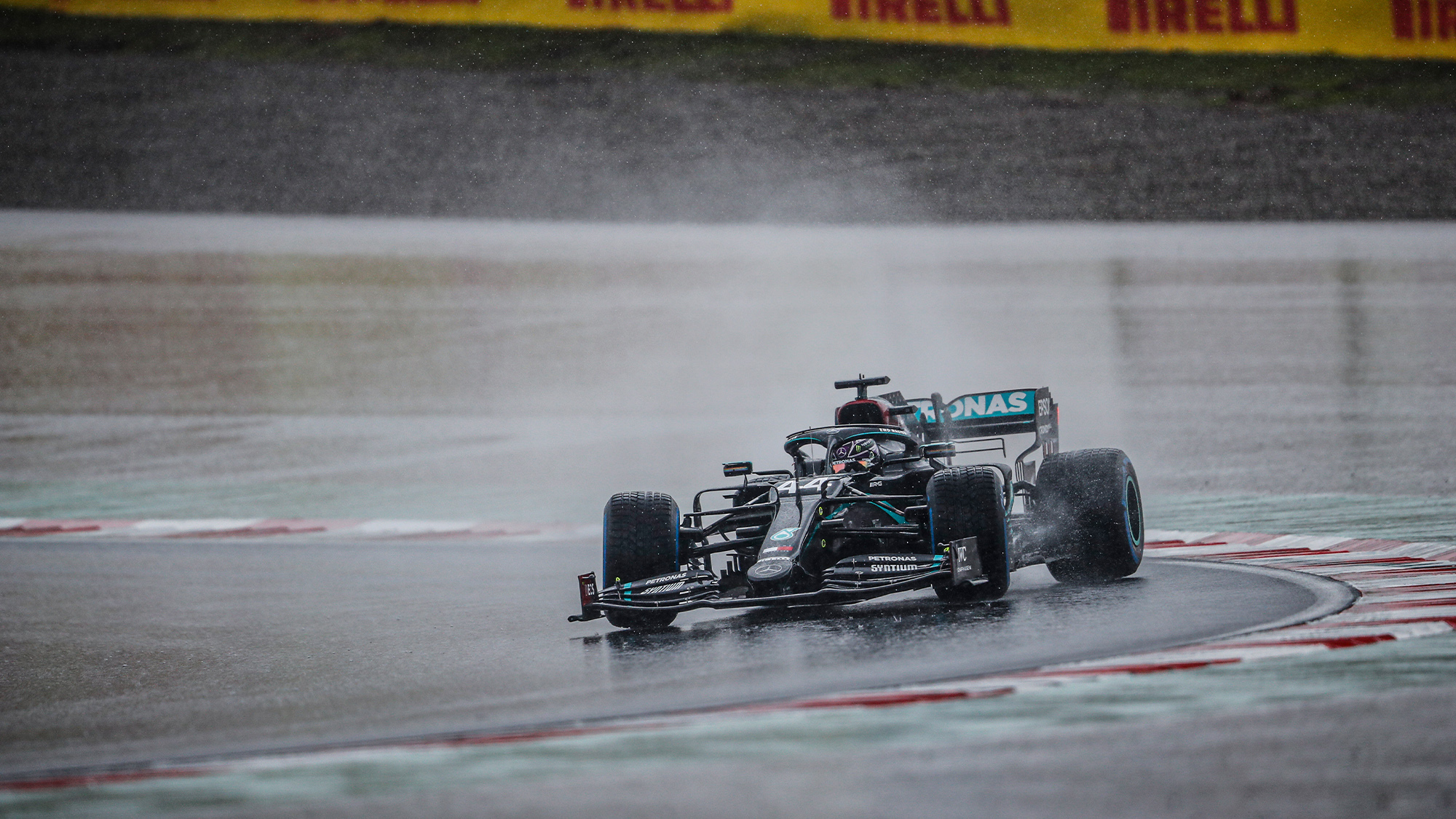 Rain and new tarmac made for a spectacular Saturday

One of the reasons Pirelli selected its hardest compounds would doubtless have been concern at how much stress the right-front is subjected to through the flat-out quadruple apex Turn Eight, but the company’s F1 boss Mario Isola admitted that had they been aware of the resurfacing before having to make their selections, they’d likely have gone a step softer.

If Pierre Gasly’s Monza victory qualifies as the most unpredictable 2020 happening thus far, Lance Stroll taking pole position for the Turkish GP must run it a close second. 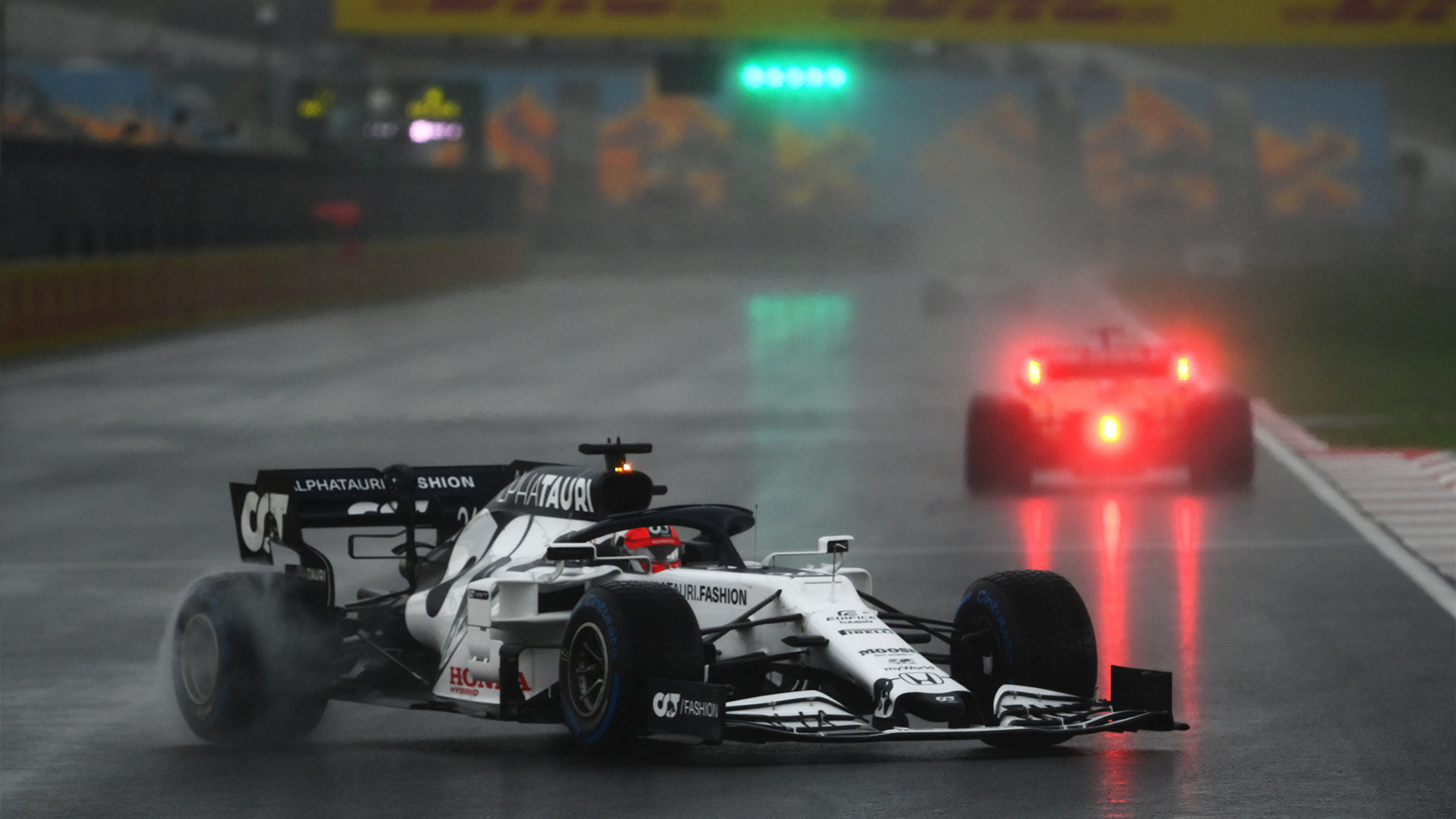 By the end of Istanbul’s wet qualifying, conditions were dictating that Pirelli’s intermediate tyre was quicker than the full wet, provided that you could switch it on. The first such indication came with a few minutes to go when Sergio Perez used them on his Racing Point to go faster than Max Verstappen’s provisional pole.

Seeing that on their timing monitors, Red Bull pulled Verstappen – who was on a quicker lap – into the pits to switch onto the green-walled tyre. Max improved, but not sufficiently to beat an even quicker Racing Point lap from Stroll.

Has a driver ever been more hacked off about qualifying on the front row than Verstappen?

A delighted Lance was left to contemplate the first pole position from a Canadian since Jacques Villeneuve at Jerez in 1997. “I’m shocked,” he admitted. “I didn’t expect us to be doing this after morning practice (in which he was 10th, 8sec behind Verstappen!). I was really under pressure. By the time we pitted to go onto intermediates I got only one lap and just nailed every corner. I’ve had a pretty rough ride since Mugello and it just feels great!”

It is, of course, not the first time that Stroll has excelled on a wet surface and team principal Otmar Szafnauer was full of praise: “Not only was it a great lap but Lance called it spot-on. He said at the start of Q3 that it was going to be intermediates by the end and he was absolutely right. And that’s not easy in those conditions.”

What can he achieve tomorrow? Stroll is realistic enough to know that, just behind him, Red Bull and Verstappen are likely to have superior race pace (a dry race is forecast). The priority will not be trying to win the grand prix, it will be maximising the opportunity that pole position, with his team-mate third, gives Racing Point in that super-tight battle with Renault and McLaren for third place in the constructors’ championship. 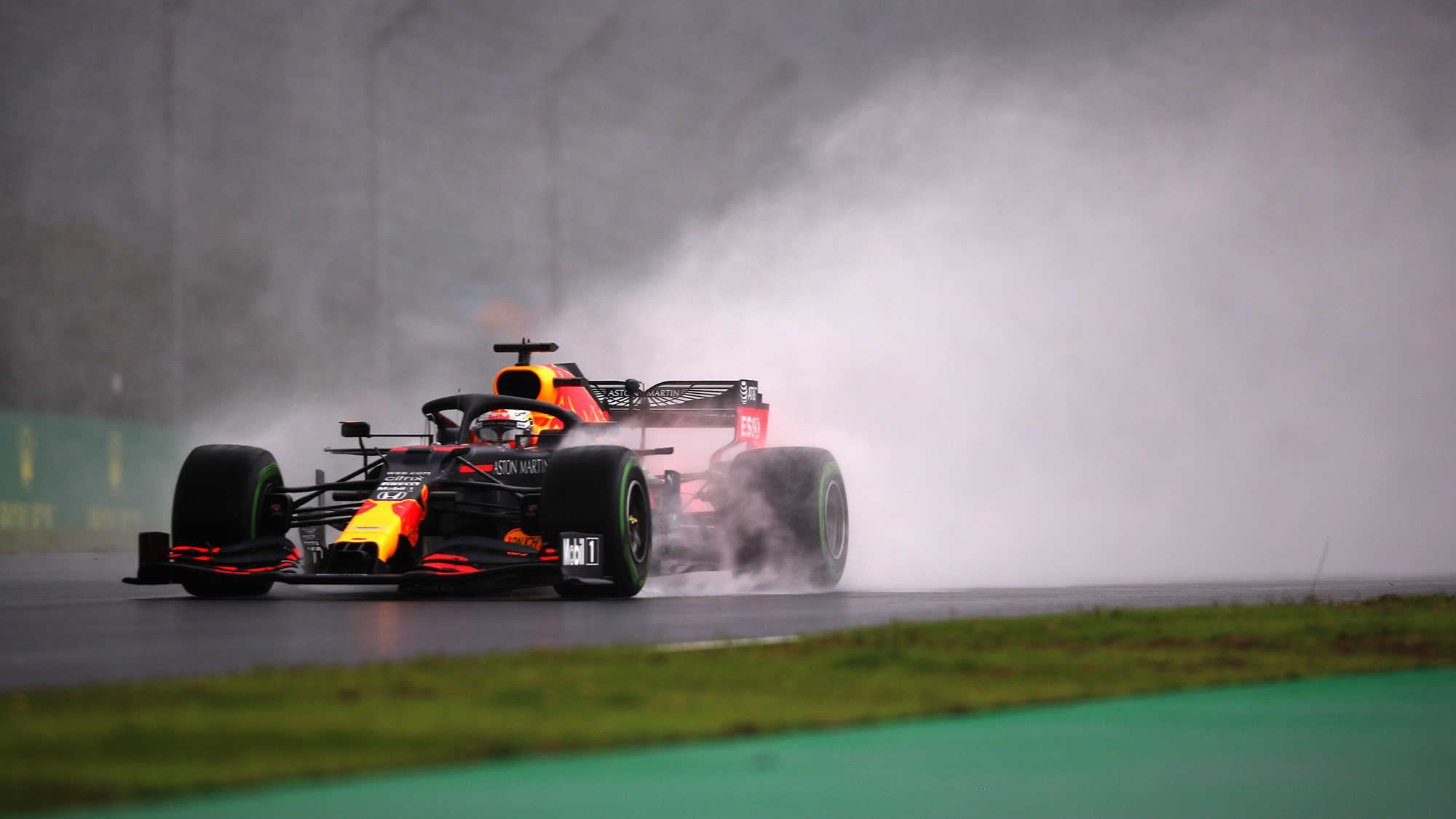 Verstappen was fastest throughout qualifying… until it mattered

Has there ever been a racing driver more hacked off about qualifying on the front row than Verstappen? To appreciate his feelings you have to look back at everything that had gone before. With the two Mercs unable to generate tyre temperature, Verstappen had topped every free practice session and, in Q1 and Q2, on the full-wet tyre, was in another league.

You might recall the superlatives applied when Lewis Hamilton took pole by 1.2sec at the Styrian GP. Well, in both Q1 and Q2 Max was two whole seconds quicker than the next guy, Red Bull team-mate Alexander Albon! Okay, so that order told you that the RB16 was working well but it wasn’t the full picture. At the start of those sessions, on the first lap, Verstappen’s times were more like 3-5sec faster than anyone else.

It was the sort of natural talent, commitment and total confidence and feel for grip that put you in mind of Gilles Villeneuve and Ayrton Senna and, to be fair, sometimes Lewis Hamilton.

One afternoon at Watkins Glen, when it was so wet that most didn’t bother, Villeneuve did, and went 12sec quicker than anyone else. And Senna was so freakishly quick in changing grip conditions that, pre-’94, there used to be one of those jokes about someone dying and going to heaven. When he gets there, he sees a driver in a yellow helmet pounding around a heavenly race track.

Well, it was that sort of level that Verstappen was at, which explains why being told that he was three-tenths slower than Lance Stroll required copious use of the bleep machine. He’d been quickest throughout Q3 too, until Racing Point got the inters switched on. Max’s final lap, also on the inters, fell short. He’d faced the conundrum of being close to Räikkönen’s Alfa on-track without being able to back-off because doing so would have meant missing out on his final lap. Behind Kimi he couldn’t keep the tyres temperatures up and had a snap at Turn Seven that cost him six-tenths, which would have been enough.

If Sergio beats Max into Turn One, passing the Racing Point may not be straightforward

“The inters were terrible for us,” a disgruntled Max explained. “When you’re first all the time and you come out second, it’s not what you want…”

Definitely not, but Verstappen will still start tomorrow’s race a red-hot favourite. One element that might make his task tougher though, is Perez’s contention that he’s much happier to qualify P3 than P2 because he feels the grip advantage at the start will be substantial enough to make up for the 8m deficit to the Red Bull.

If Sergio does beat Max into Turn One, passing the Racing Point around Istanbul Park may not be straightforward. And doubly so given that Verstappen’s foe will be Perez. With the caveat that Sergio, who starts from the top three for the first time in his F1 career, will no doubt have it hammered into him that team scoring is more important than personal satisfaction. Bin it at your peril! But, in the absurd position of not yet having a 2021 drive, whether he listens or not is another matter.

Alex Albon starts fourth in the second Red Bull with a time achieved on the full wet. “It was much easier on the other tyre,” he confirmed. “On the intermediate I was going off everywhere, which made it hard to generate temperature.”

A second behind Albon, Daniel Ricciardo maintained his rich recent vein of form, not to mention Renault’s hopes of the championship third place, with fifth quickest lap, himself a second clear of the man hoping to clinch his seventh world title tomorrow afternoon. 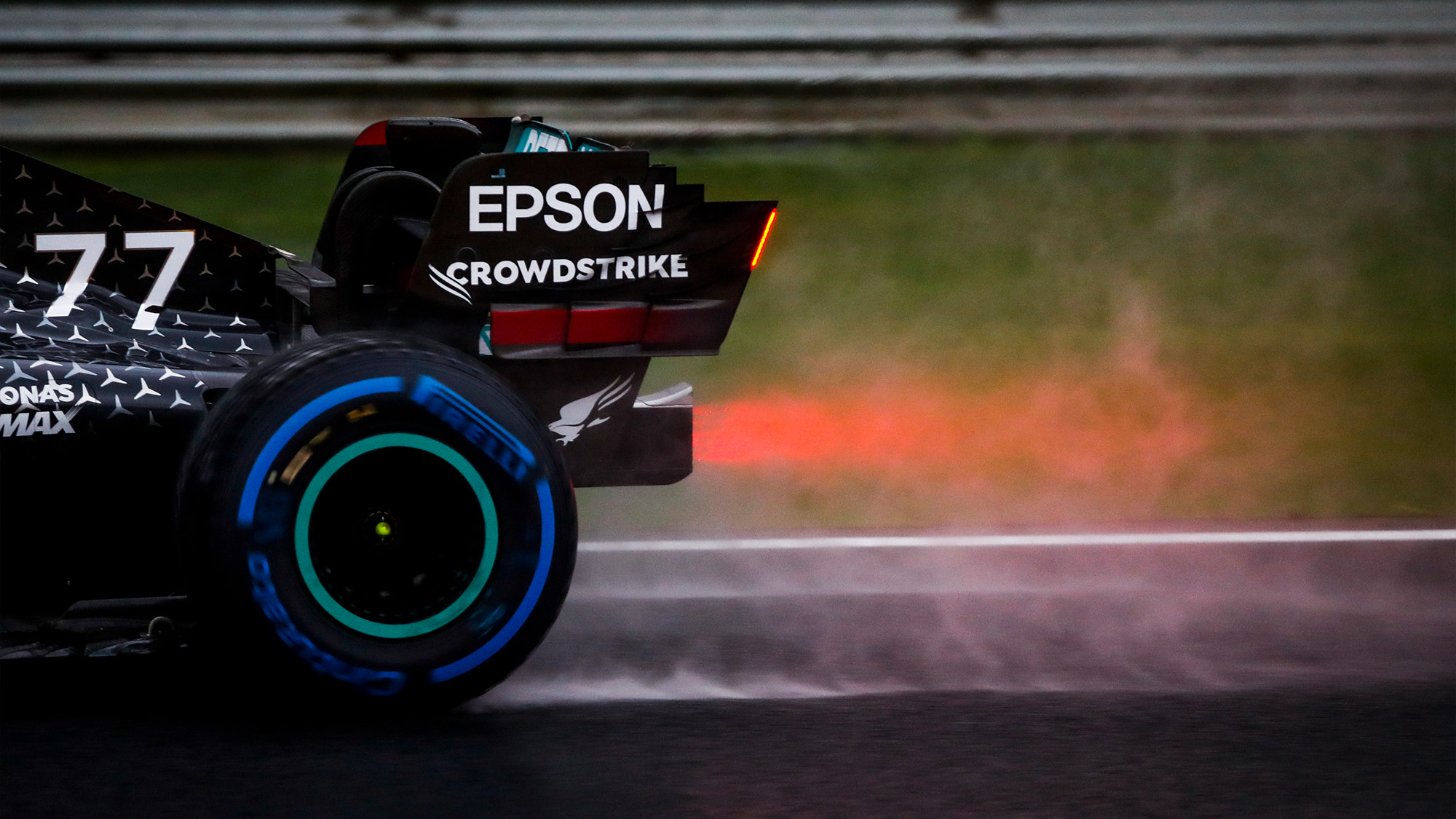 Mercedes drivers blamed lack of grip for their pace in qualifying

Whether on Friday’s dry skating rink or Saturday’s wet one, and for all his innate talent, Hamilton has been unable to get in amongst it this weekend. If the difference is tenths of a second, it can be the man in the cockpit. When the deficit to pole is almost five seconds, it clearly is not.

“I didn’t spin, I didn’t make any mistakes, I did my absolute best, there just ain’t no grip,” was how Lewis put it. Still, all he has to do is make sure Valtteri Bottas doesn’t outscore him by eight points. And Bottas, of course, is in the same boat, which in Turkey, could not be a more apt description. Valtteri goes to the grid ninth, seven-tenths slower, separated from his team-mate by Esteban Ocon and Kimi Räikkönen.

The Red Bull and Sebastian Vettel partnership dominated Formula 1 in the early 2010s. A decade on from the first championship, his race engineer, Rocky, looks back at what made them unbeatable

Finally, hats off to Alfa Romeo, who got both cars into the top 10 for the first time in 2020. Fittingly too, on the occasion of the Hinwil squad’s 500th F1 start since JJ Lehto and Karl Wendlinger lined up on the Kyalami grid in 1993 and Lehto scored a couple of debut points for fifth place.

It’s 50 years since Peter Sauber, now 77, founded the company and, for a small team, his achievement should not be underestimated. Only Ferrari (1004), McLaren (876) and Williams (732) have started more. Some statisticians credit Lotus with 606 but Lotus proper, which closed in 1994, managed 491.

The man himself does not count Robert Kubica’s 2008 Canadian win as a Sauber one, achieved as it was with BMW bucks, and considers that his (independent) team’s best result is Perez’s second place, 2sec behind Alonso’s Ferrari in Malaysia 2012. He does, however, count the BMW starts given that his Hinwil personnel were all involved.

It is unlikely that Sauber (Alfa) will have a win to celebrate tomorrow but they do have F1’s most experienced man in the cockpit, who won the inaugural Turkish GP from pole in 2005 for McLaren, so stranger things have happened. And in these conditions, who knows? What you do feel confident in saying, is that for the first time in 2020 Lewis Hamilton is an unlikely race winner. It’s hard to see beyond Verstappen tomorrow.