Charles Leclerc was the fastest man on Friday ahead of this weekend’s Australian Grand Prix, lapping the revised Albert Park circuit 0.2sec quicker than Max Verstappen.

Ferrari topped both practice sessions, with Carlos Sainz ahead in FP1, even though the cars were bouncing severely at times — the porpoising problem not yet resolved.

Once again Red Bull looks to be a close match for Ferrari, but Fernando Alonso was also amongst the leaders, posting the fourth fastest time after soft-tyred qualifying simulations, with team-mate Esteban Ocon sixth.

Mercedes remains in the midfield and the outlook is even bleaker for Sebastian Vettel, returning after missing two races due to Covid. His Aston Martin ground to a halt in FP1, and he missed all of the second session.

Vettel’s crowd-pleasing return to the pits, by riding a scooter on track once FP1 was over, has also landed him with a summons to see the stewards.

As F1 cars ran in Melbourne for the first time in three years, spectators packed grandstands on the first day of a sellout weekend.

Sergio Perez was out first on track, Red Bull testing a slightly modified wing and measuring the results with a sizeable aero rake ahead of the sidepods. With a lap in the bag, he returned to the pits, swapped the nose for a different one and went out for another test run. 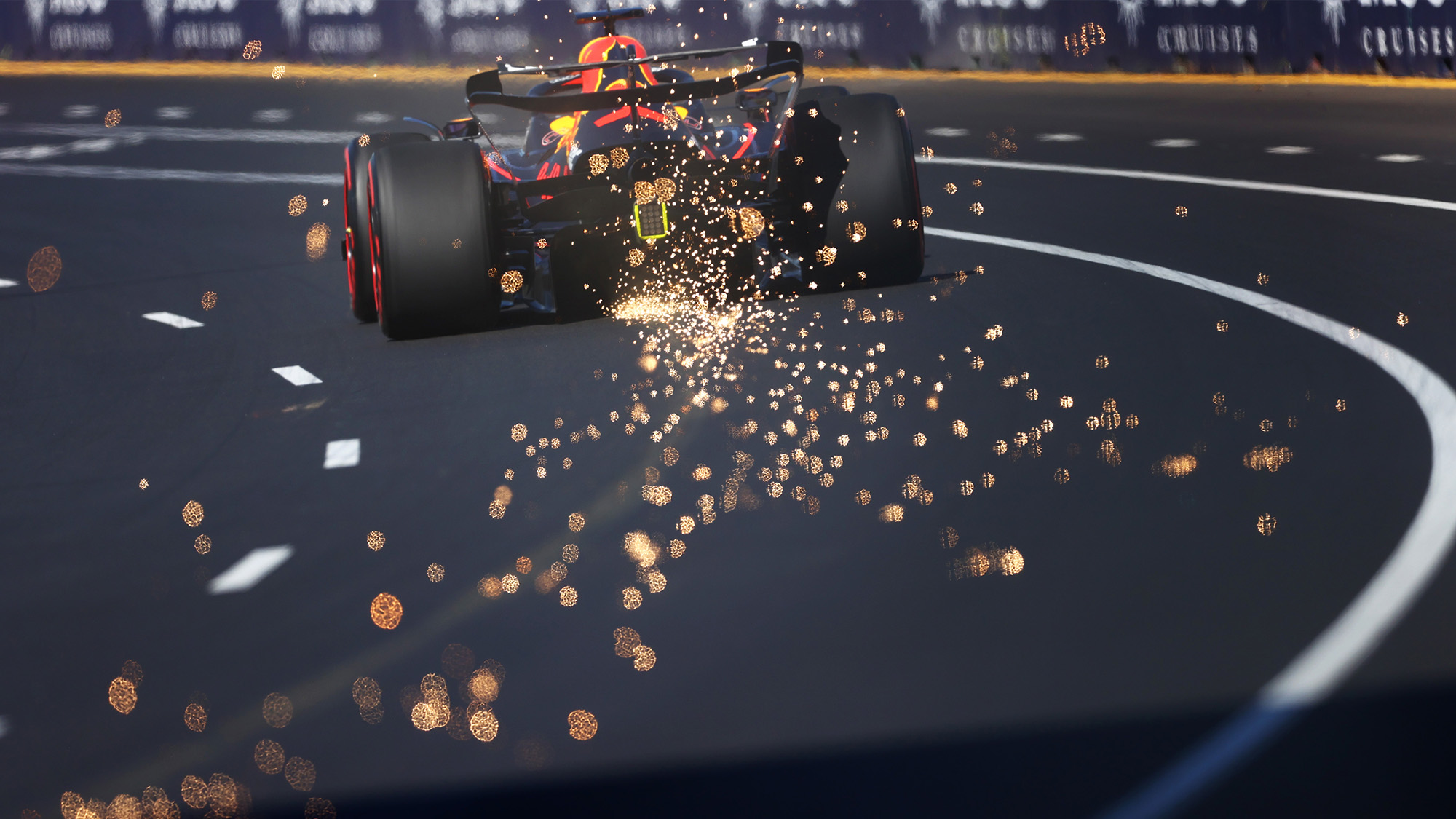 Six minutes in and Lance Stroll was complaining that he was being impeded by Lewis Hamilton, which stewards declined to investigate.

Despite missing the morning drivers’ press conference due to feeling unwell overnight, Kevin Magnussen was out early in the Haas.

The Red Bulls were initially alone on soft tyres which, for the first time this year, are made up of the very softest C5 compound. The rest of the field opened their session on the medium and hard tyres (C3 and C2 compound) 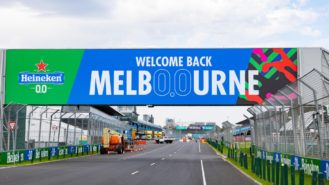 Strategy games and DRS overload: 2022 Australian GP what to watch for

Pierre Gasly was caught out at the tricky Turns 1-2, running over the grass.

Zhou Guanyu was the next driver complaining of being blocked by Sainz as he tried to go around the Ferrari towards the end of the lap. Stewards said that they would investigate after the session

Slowing for Turn 3 was causing problems, with Hamilton and Sainz among those locking up.

After 20min, Max Verstappen topped the timesheet, courtesy of a soft-tyred run, followed by McLaren’s Lando Norris and then Leclerc.

Soon afterwards, the action was interrupted after a piece of bodywork that fell off Perez’s Red Bull brought out a brief red flag to clear the debris.

When the session resumed, most drivers switched to soft tyres, with Leclerc moving to the top of the timesheets, 0.03sec faster than Verstappen.

He and Leclerc went on to trade fastest times, doing nothing to dampen the anticipation of another close fight in the race. But eventually, Sainz pipped his team-mate and went top with 20min to go.

Turn 3 continued to cause problems, this time for Kevin Magnussen, who locked up and ran into the gravel, managing to power his way out. Soon afterwards, Fernando Alonso caused a flurry of yellow flags with a spin at Turn 11.

Leclerc’s rapid progress was interrupted by a practice start at the pitlane which catapulted him towards Turn 1 — perhaps a little faster than expected, resulting in a short bounce across the gravel on the outside. 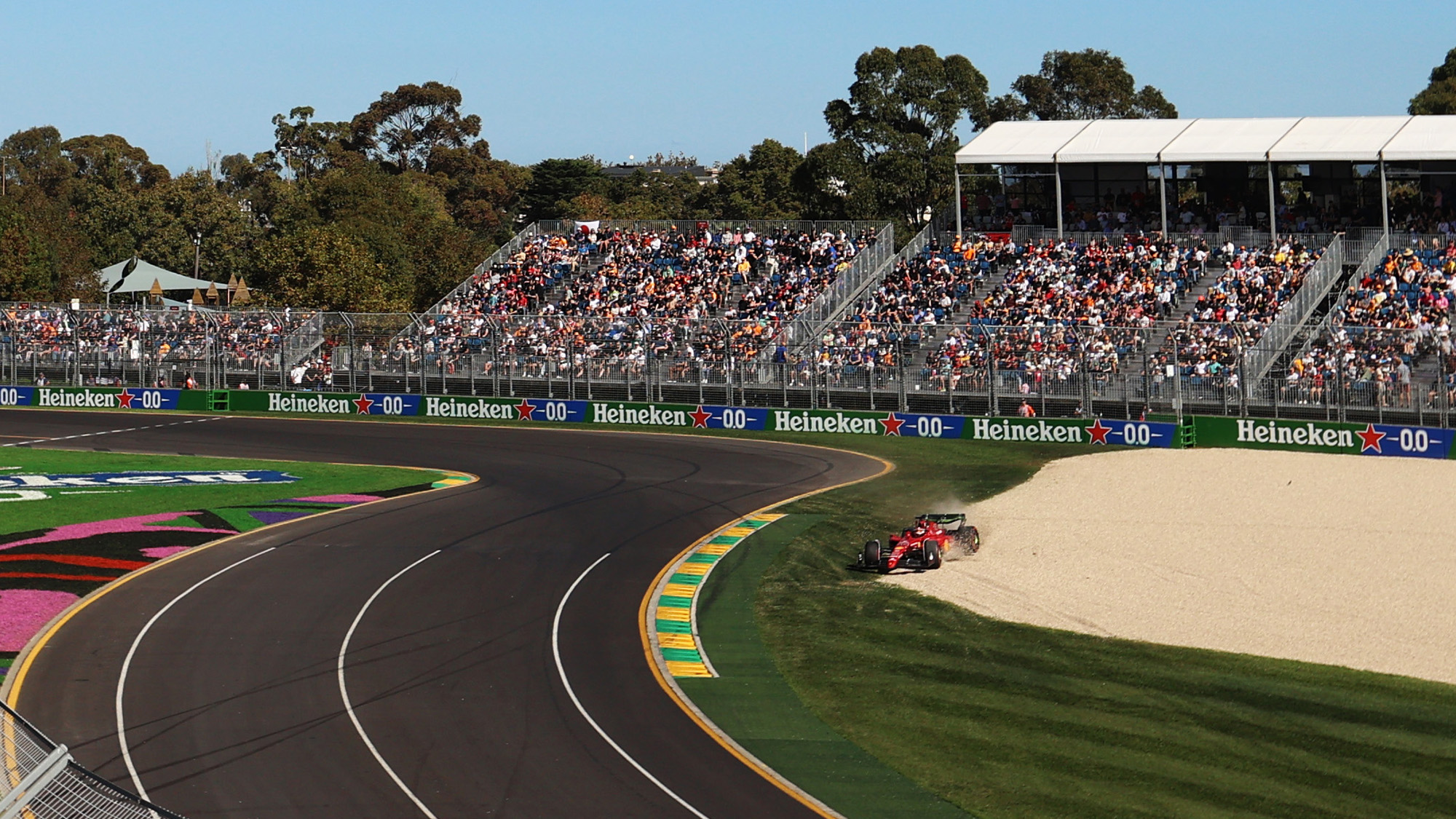 Leclerc takes the long way round

Earlier in the day, Sebastian Vettel said that it was strange to watch a race on TV while he had Covid — the Bahrain GP was the first race weekend he’d missed since the 2007 European GP.

But with 14 minutes to go, he became a spectator again for the rest of the session, as the Mercedes engine in his Aston Martin expired, with smoke streaming from the back. In a now-trademark effort to preserve the car, he grabbed a fire extinguisher and gave a precautionary blast over the side vents.

After a short pause to recover the Aston, the session resumed with 10min to go and there was some tension on track as the cars jostled for a clear run.

“These ******* Red Bulls are getting in the way everywhere,” complained Russell. They weren’t hanging around though: Perez moved up to third with a 1min 20.399sec lap

The Ferraris seemed to be pushing hard;  Sainz running wide and kicking up dust on the side of the track, while Leclerc once again took a trip off track just before the chequered flag.

Things we didn't expect to see at the #AustralianGP:

Making up for lost time, Vettel managed to get going after the chequered flag. His Aston Martin swapped for a scooter and helmet popped up, the German weaved his way back to the pits, playing to the crowd.

The fans loved it. The stewards may not: Vettel is under investigation.

Most cars started out on medium tyres under an overcast sky and the timings quickly reverted to FP1 form, with the Ferraris at the top.

Sebastian Vettel was watching on from the pits after his team confirmed that an engine change was needed, following the failure in FP1. Mick Schumacher was late out: his one and only Haas (with no spare chassis available this weekend) still up on jacks at the start of the session.

Last year’s title contenders weren’t having a great deal of luck. Lewis Hamilton ran wide as he struggled to control a difficult-looking Mercedes, and Max Verstappen said that he was struggling to turn the car, after having a lap time deleted for cutting the Turn 10 chicane.

Elsewhere, there were plenty more complaints from drivers complaining of being impeded. 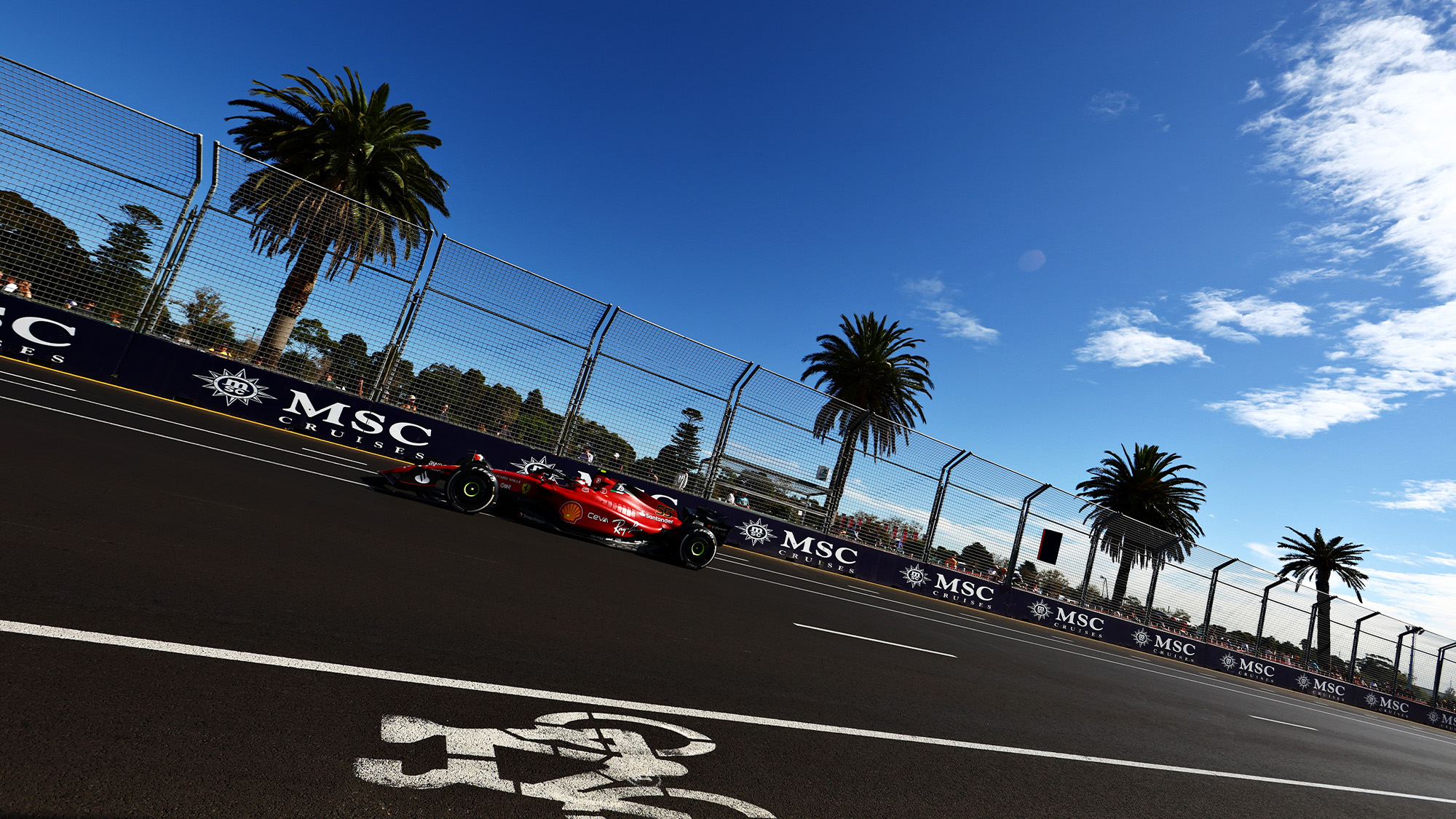 After eight laps, the Ferraris pitted for soft tyres, and 20min into the session, they remained in the lead, heading another Ferrari-powered car:

Most of the field were back on soft tyres at half distance and that brought Fernando Alonso to the top of the table with a 1min 19.537 lap — briefly, before the Ferraris reasserted themselves.

There was porpoising aplenty during the qualifying simulations, with Ferrari among those visibly affected. Not that it stopped Charles Leclerc topping the times, with the first sub-1min 19sec lap: a 1min 18.978sec effort, 0.2 sec ahead of Max Verstappen and 0.3sec faster than Sainz.

Alonso led a strong effort for the Alpines, setting the fourth fastest time ahead of Perez and then team-mate Esteban Ocon. Valtteri Bottas, the McLarens and Pierre Gasly made up the rest of the top 10, leaving Mercedes once again mired in the midfield.

Race runs were interrupted by a red flag when Lance Stroll’s front-left wheel deflector flew off as he bounced over kerbs, with only eight minutes to go when the session resumed.

There was severe porpoising for Leclerc in his final run, but his earlier time remained the benchmark as Friday running ended.