The circumstances may have been unusual, but nevertheless the superb victory for Esteban Ocon and his Alpine team in Hungary provided a reminder that both parties should be considered as serious players as we head towards 2022 and the new regulations.

Memories are short in this sport, and you’re only as good as your last race. Ocon had fallen a little off the radar over the last couple of years, and the 24-year-old was perhaps not so readily considered as part of the group of young superstars of the next decade that includes the likes of Max Verstappen, Charles Leclerc, Carlos Sainz, Lando Norris and George Russell.

It’s easy to forget that he came into F1 with Manor in the middle 2016 on the back of beating Verstappen to the 2014 FIA F3 title, and winning the GP3 crown the following year – he had a brilliant junior record, was on the fast track to the top and had earned himself the support of Mercedes.

He showed great talent going to wheel-to-wheel with his Force India/Racing Point team mate Sergio Perez in 2017 and ‘18. It was only the takeover by Lawrence Stroll and a guaranteed seat for the Canadian billionaire’s son Lance that saw Ocon lose out on a drive in 2019, forcing him to spend a largely fruitless year as Mercedes reserve driver.

A move to Renault for 2020 was his chance to regain momentum, but he endured a tough year alongside an on-form Daniel Ricciardo, at one stage his seat even appeared to be under threat. An opportunistic second place behind Perez in the Sakhir GP came at just the right time.

This year with the rebranded Alpine team he’s had mixed fortunes. At some venues he has outpaced new team mate Fernando Alonso, but he also endured a painful run of poor weekends when he struggled for pace, and little seemed to go right.

The team couldn’t get to the root of the problem, but before the British GP they switched his chassis – often the last resort in situations where a driver is consistently unhappy. It seemed to do the trick, and at Silverstone last month he finished a solid ninth.

“It’s fair to say we didn’t exactly know what the issue was, or if there was an issue with the car,” team executive director Marcin Budkowski explained early in the Budapest weekend. “But clearly, the combination of driver plus car wasn’t wasn’t delivering.

“So we took the decision to change as many things as we could on the car. Because when you don’t have a clue, and you can change some parts, why wouldn’t you?

“We’ve done some tests on the chassis, and we haven’t seen anything untoward in terms of rigidity, or the things you would get normally, if a chassis has an issue. We did find a small issue on a front suspension element.

“It was fairly minor. But some of the things it would have provoked were some of the symptoms that Esteban was describing.”

So was that really the cause of all his problems?

“Whether it was worth the all the lap time as such, I don’t think it was,” said Budkowski. “But the reality is these kind of things, if you have something small that destabilises the driver and as a result he loses confidence, then it could be a few tenths coming on top of that. I can’t give you a full answer, because we don’t really know. But we did find something that was a bit abnormal.

“And the combination of making these changes and Esteban regaining confidence in the car, he bounced back to a good level of competitiveness at the last race. And I think that’s what matters going forward. He was happy with the car from P1 onwards, and actually he felt didn’t have the issues he was describing before.”

Progress continued in Hungary, where Ocon qualified eighth, just in front of Alonso. That offered some promise for the race, but no one could have predicted that an opportunity would open up for him the way it did.

He was second after the first corner crash, and then gained the lead after the restart when Lewis Hamilton didn’t pit on the formation lap to change tyres, and had to pit under green.

He subsequently drove a brilliant race under intense pressure from Sebastian Vettel, while knowing that Hamilton was gaining ground – at least until the World Champion found Alonso riding shotgun and doing a great job of buying time for his team mate. In the end Hamilton ran out of laps, and Ocon didn’t put a foot wrong as he successfully held Vettel off.

“He just kept his head cool,” said Budkowski after the flag. “He just drove a perfect race. We had to fuel save during the race. So he had to lift and coast. Not very comfortable, when you have Vettel breathing down your neck!

“He managed that perfectly. He fuel saved in the laps where he had a bit more of a gap. And he didn’t in the laps where Seb was close. So, great maturity, great race craft from Esteban. He’s progressed a lot this season.”

Budkowski is convinced that the win will put Ocon, whose Alpine contract was extended earlier this year, back on the right track.

“He had a tough moment, a tough couple of races in Austria, but bounced back in Silverstone. And then here he took some opportunities, but he delivered on them perfectly.”

The victory also provides a similar confidence boost to the team. This is an organisation that has winning in its DNA – there are still people who were around when Michael Schumacher won two titles in the Benetton days in 1994-’95, and more who were part of Alonso’s double success in 2005-’06.

“We missed some of these before, and they were painful” Budkowski

The team has been on a rollercoaster ride since then, passing through several identities. Prior to last weekend Enstone hadn’t won a race since Kimi Räikkönen logged a victory under the Lotus name in 2013.

In the hybrid era the team’s only chance of success was on one of the those days when all the top guts hit trouble, and it’s a roll of the dice. Finally in Hungary it worked out, as team and driver threw a collective double six. 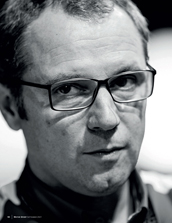 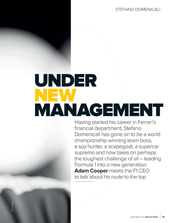 Stefano Domenicali — My route to the top of Formula 1

At the start of this year Stefano Domenicali joined the Formula 1 organisation as its new CEO, and is only its third ever top man after Bernie Ecclestone and Chase…

“There’s an element of luck, but it’s not everything. You can be a bit lucky at the start, and then you still have to deliver on it. As a team it’s credit to all the work that people have done, but also the fact that these are defining moments in the life of the team. However, let’s not get carried away.

“We don’t have a race-winning car on a normal race weekend. And that’s our objective, is to build one. So we want to taste that champagne in every race, and not once when we get a little bit of favourable circumstances. So super important for the team, don’t get me wrong. The objective is to do that by building a quick car.”

The hope is that will happen in 2022 under the new rules. At the moment the team is somewhat compromised, especially on the power unit side. Of late it hasn’t made the progress that some of its rivals have, and is instead anticipating a leap forward next year with a major PU upgrade.

“We all have our competitive analysis,” Budkowski noted. “And we have a fairly good idea of where we stack in terms of both power, but also in terms of energy management, and weight and packaging and things like this.

“It’s the same engine we’re using for the third consecutive year, with very, very small changes in 2020 and 2021. It’s a ’19 engine we’re using. And some of our competitors made gains that we haven’t. And to be honest, it’s also the same chassis and the same gearbox as well. So the mechanical base of the car is the same for three years now.

“The choice was driven by the fact that we were planning to introduce all new engine in 2021, together with the new chassis regulations. Chassis regulations have been delayed, we have also delayed the introduction of that new engine to 2022. Because unfortunately, with the factory closures and the working from home requirements we had last year, we were just unable to deliver it for 2021.

“So we’re in a slightly not ideal situation where we had to delay our new power unit, which beyond improvements to propulsive power and energy management, the kind of usual things that make you go quicker on a straight line, has also a new architecture and changes that are designed to address some of our weaknesses compared to our competitors.

“But we didn’t have the resources to re-launch a development programme on this year’s engine, and continue to work on the 2022. So we’ve decided to put all our efforts on ’22. So it’s a strategic decision. I believe it’s the right one. But it’s painful, because as a result this year we lost ground compared to our competitors.”

The new rules, a new engine and the increasing impact of the budget cap on rivals Mercedes, Red Bull and Ferrari all give Alpine some real cause for hope. Everyone knows that the Hungarian success was about grabbing the opportunity on the day, but it will also encourage all involved to raise their games even further.

“Someone once said, I can’t remember who it was, the amount of work doesn’t change, it’s the amount of disappointment,” said Budkowski. “Because up and down the grid, whether it’s Haas or Williams, or Red Bull or Mercedes, everybody works very hard. And that’s the case at Alpine as well.

“And that hard work sometimes gives you incredible satisfaction like today, and sometimes it’s really tough, and it’s just good that sometimes you have that opportunity to taste this. And all it gives you is to make you want more.”