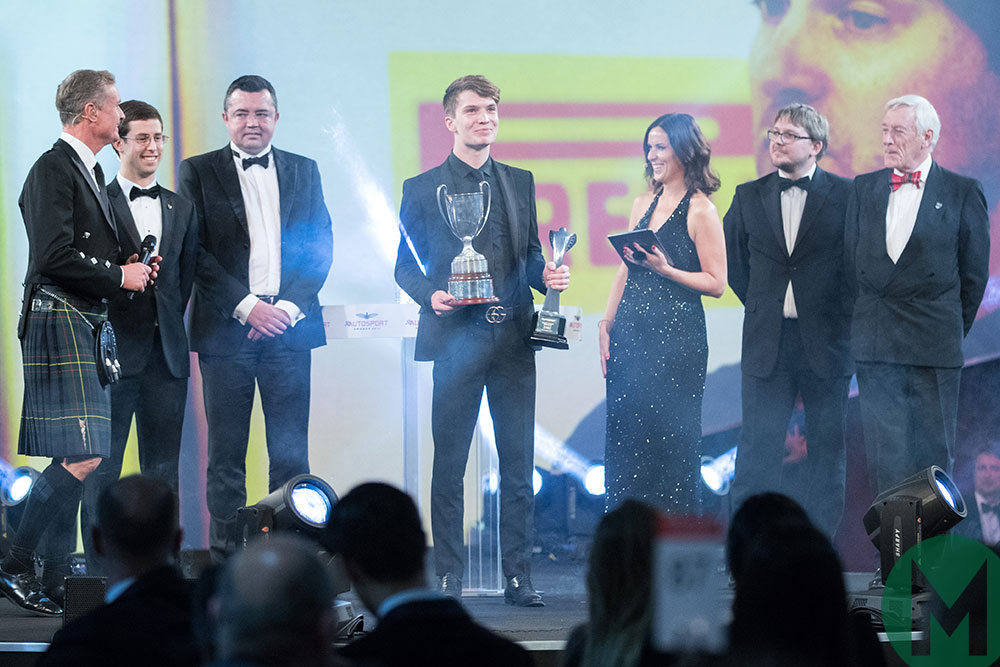 Aston Martin is the new partner of the Autosport BRDC Award for young British drivers, replacing McLaren, which recently ended its longstanding partnership.

It was announced in January that McLaren, which had given its name to the award since its inception in 1989, was ending its association with the accolade.

And today Aston Martin Lagonda boss Andy Palmer said, at the Geneva Motor Show, that the famous British brand is stepping in.

With this new partnership, from this year the award will be called the Aston Martin Autosport BRDC Young Driver of the Year Award.

An opportunity to test a McLaren Formula 1 was among the prizes given to the annual winner, and the 2019 winner will now receive a test a Red Bull F1 car at Silverstone, given Aston Martin’s association with the team. The winner will also get a run in an FIA World Endurance Championship Aston Martin Vantage GTE car. The award also has an overall £200,000 prize fund.

The award was inaugurated in 1989 by Autosport’s Peter Foubister and then-McLaren boss Ron Dennis, to recognise and assist rising British racers. It since has established itself as a high-profile and prestigious competition, with the award’s recipients including several drivers who would go onto become famous motor sport names. These include the inaugural winner David Coulthard as well as Jenson Button, Dario Franchitti and more recently 2019 F1 debutants George Russell and Lando Norris.

The finalists are assessed by a judging panel on their performance across a variety of different racing machinery as well as in fitness tests and interview sessions. The winner is announced at the annual Autosport Awards ceremony each December.

As before the judging panel will be led by 1992 World Sportscar Champion Derek Warwick. This year there will be four finalists selected from nominations made on Autosport platforms as the most promising British youngsters competing below FIA-spec Formula 3 or the equivalent.

“We are pleased to lend our support to Aston Martin’s drive to discover motor racing’s future stars and this programme represents a golden opportunity for young drivers to further their career at the highest levels,” said Red Bull boss Christian Horner.

“Red Bull has a long and successful history of nurturing young racing talent through its junior team and so we look forward to supporting Aston Martin in its quest to find the champions of tomorrow.”