Funny now, is it not, to look back a decade or so and remember what the powers-that-be were saying about Formula 1, and the way it needed to change? According to FIA President Max Mosley it was all getting a little too fast and the time for action had come.

Over the years we had heard that frequently, but invariably the concern was with cornering speeds. The changes made to contain them were always to do with reducing aerodynamic downforce, which – as anyone old enough to remember the sport before the advent of wings will tell you – has had only a detrimental effect on the quality of racing. 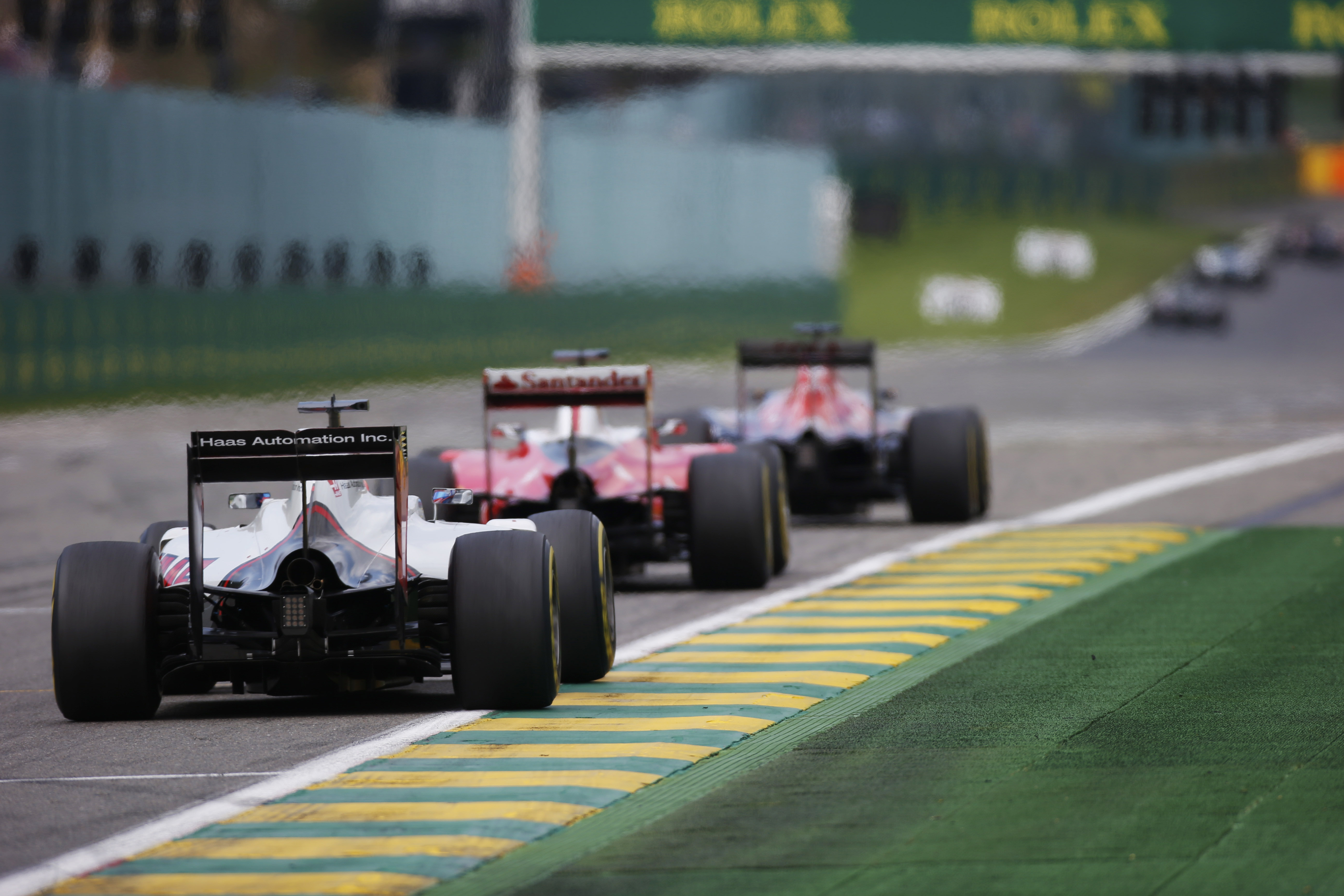 It’s really not too difficult to understand, is it? As soon as you create a situation – ‘dirty air’ – where closely following another car through a corner becomes a near impossibility you’re bound to reduce the possibility of overtaking on the following straight. Throw in ever-reducing braking distances into corners, and the picture becomes complete.

As Rick Mears said to me at Indianapolis this year, “The guys in charge don’t get it, do they? Over time racing has been progressively ruined by ‘aero’ – by more and more downforce, so that you have a situation where cornering speeds are way too high, and straightline speeds – because of all that drag – way too low. What you need is a far bigger difference between the two – only then will you get proper racing again. If you have so much downforce that anyone can go through flat, what’s the point in hiring a great driver?”

Mears was talking primarily about ovals, always his particular area of expertise, and it’s not difficult to see his point. When you watch Indy qualifying on TV, and appreciate from in-car footage that the engine note never changes the lap round, you can reach only one conclusion: this can’t be right.

Against all advice from the participants IndyCar this year increased downforce. And while the cars still race well at big ovals like Pocono, at a smaller one such as Phoenix the lack of passing is striking. Similarly, at many of the road circuits drivers have lamented on the radio their difficulty in overtaking: “I just can’t get close enough to him through the turns…”

As in motor racing across the world, the fan base in NASCAR – be it at the tracks or on TV – may have shrunk over the last few years but at least there the rulemakers have addressed a fundamental problem in the sport: in 2016 they have actually reduced downforce. Few would dispute that the quality of the racing has significantly improved.

Back to F1. Ten or 12 years ago Max Mosley was hellbent on reducing speeds, which he said were getting out of hand, but curiously his attention was focused this time not on cornering speeds but on engine power. The 3-litre V10s, he said, were now producing more than 900 horsepower and that simply had to be nipped in the bud. No matter that this figure fell well short of those attained in the ‘80s, when the turbo era was in full swingm and on qualifying boost some drivers had as much as 1500bhp to fight with; 900 was too much, Mosley insisted, and to that end for 2006 the 2.4-litre V8 would be introduced. 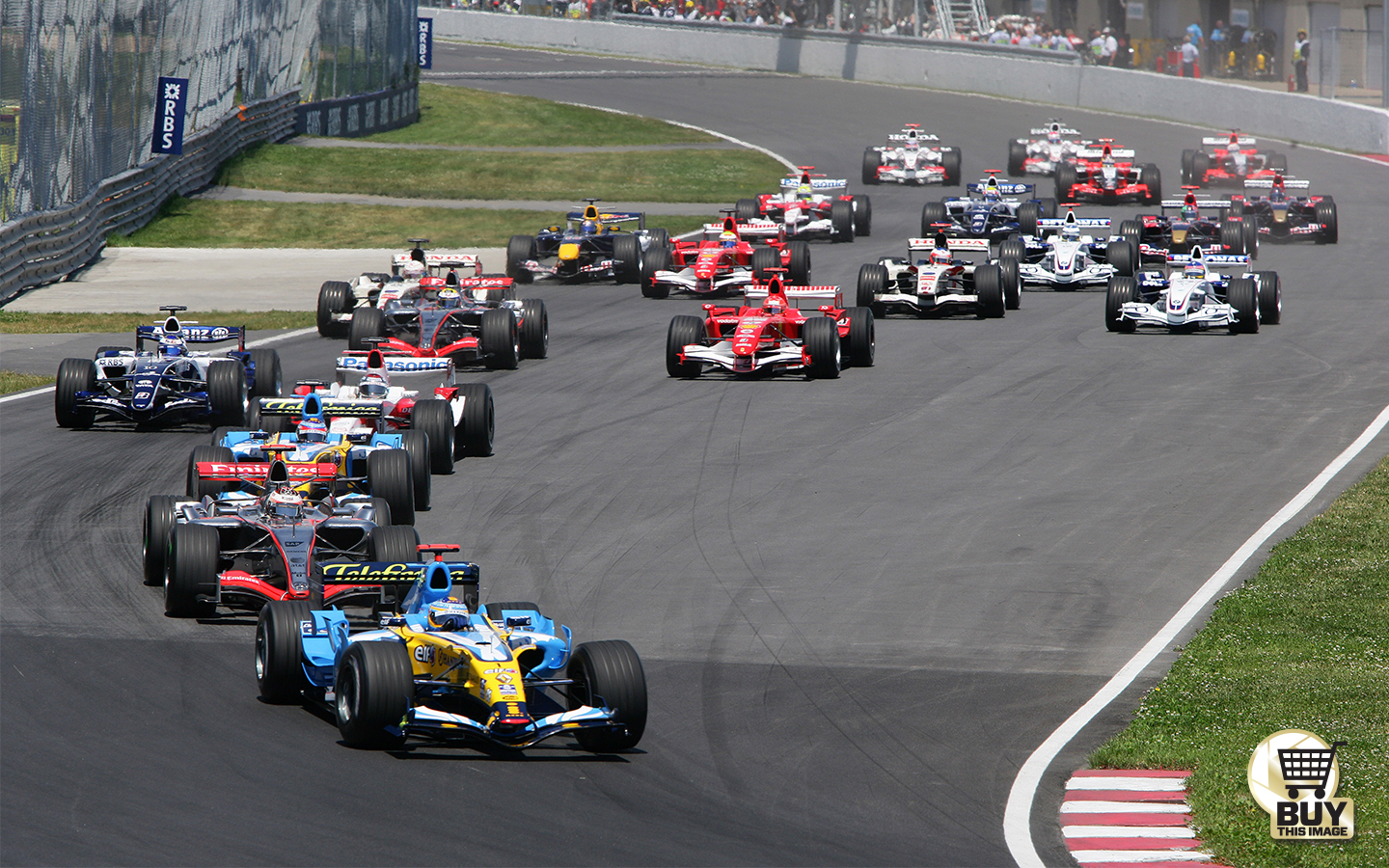 This, to my mind, was a rather anaemic period of Grand Prix racing, with engines revving hysterically, all of them making the same ‘white noise’. If we go by Tony Brooks’s definition of Grand Prix racing – and I have never heard a better one – that, “A Formula 1 car should always have slightly more horsepower than its chassis can comfortably handle”, the balance between power and ‘aero’ was well askew.

That said, many were those – particularly folk who had never heard a V10 on full noise – who relished the volume of sound produced by the V8s. And if the power outputs were modest compared with those of earlier engines, at least the car itself remained light in weight – and therefore a good deal more lithe than those we have watched in the three seasons of ‘hybrid’ F1.

For the first of those seasons the cars were pretty good to watch. Downforce had been reduced, and although in time F1’s clever aerodynamicists inevitably found ways of bringing it back again, in 2014 relatively little downforce, combined with the immense torque of the ‘hybrid’ engines – I’m sorry, I won’t call them ‘power units’ – made for skittish behaviour out of the corners, which is the first requirement of any avid spectator. Unfortunately, though, two years on the cars are much more mannerly.

I was not among those who thought the old engines – particularly the milk-and-water V8s – should have been retained at all costs. I know it is said that a man may be considered old when he starts to think in terms of mpg rather than mph, in considering his next car, but the fact is that we are into an era when road car manufacturers are above all else focused on ‘clean’ engines and reduced fuel consumption. And that being so, if F1 wished to retain such as Mercedes, Renault and Honda as engine suppliers it had to offer them a formula that would keep their interest, and allow them to justify continued F1 involvement to directors and shareholders.

Hence the hybrid motors, insisted upon by Mosley’s successor Jean Todt, and I suppose my first thought is to thank God for Ferrari, who persuaded him at least to permit six cylinders, rather than the four he wanted.

No one, though, can be other than mightily impressed by the power figures swiftly attained, particularly by Mercedes. Lewis Hamilton and Nico Rosberg may have more at their right foot than others, but virtually everyone on the grid has more power than was ever seen in the V10 era, together with hugely reduced fuel consumption. 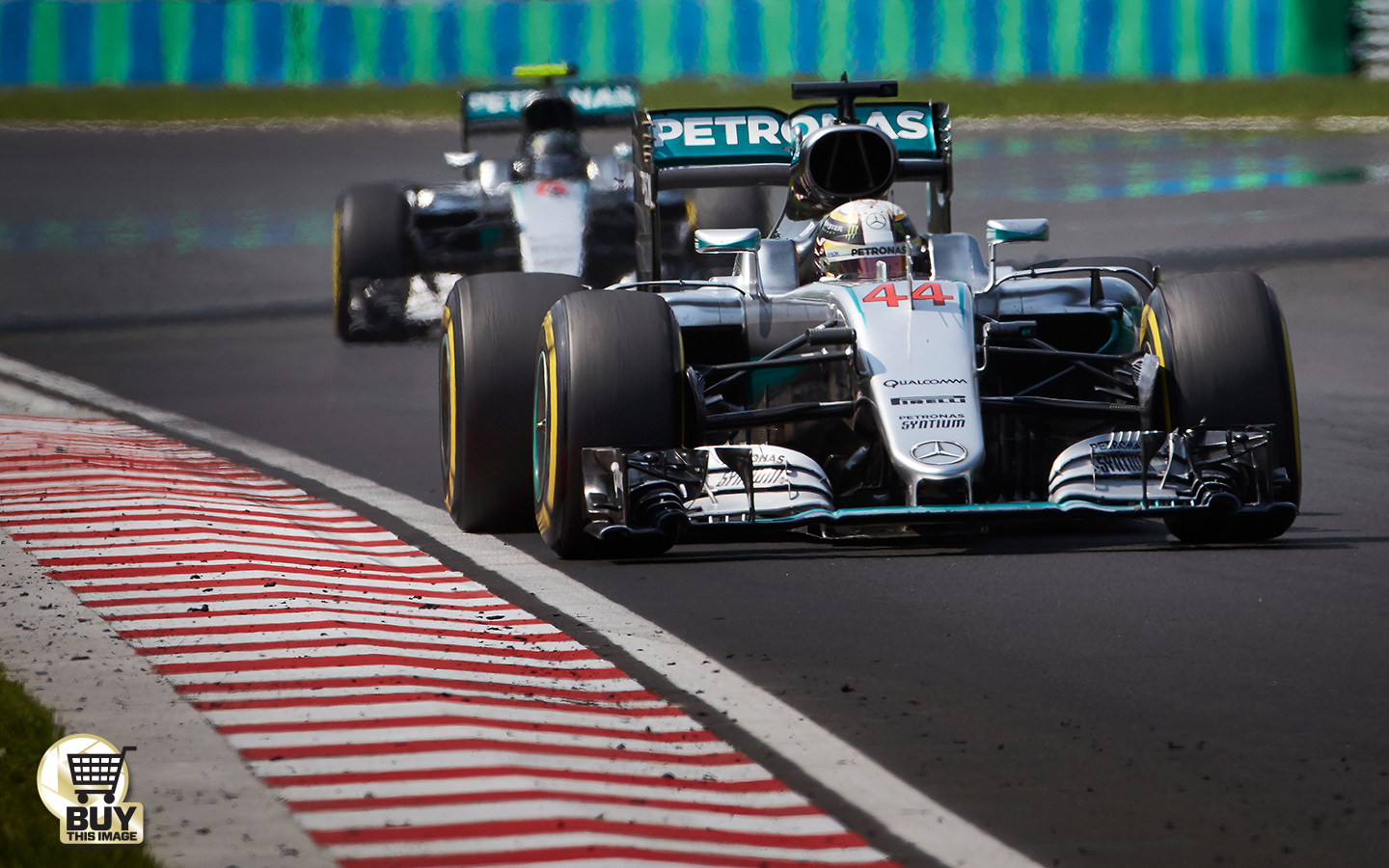 Unfortunately, though, it isn’t that simple. For one thing, the new breed of engines are monumentally more expensive than those they replaced, which has created terrible problems for the ‘customer teams’. For another, they are staggeringly complex, to a degree that apparently requires constant radio advice from engineer to driver. For a third, they are massively heavier than F1 engines of the past, so that the minimum weight limit is now more than 100kgs higher than it used to be.

Comparatively, therefore, the modern Grand Prix car is a bit of a whale, and not one many drivers particularly enjoy. Throw in the fact that they continue to race on these silly ‘seven laps and throw them away’ tyres, and the fact that the fuel consumption rules are like something from the Mobil Economy Run, and you can see why the drivers find contemporary F1 way less stimulating than they did.

As Lewis Hamilton puts it, “As soon as we’ve done the start, we slow down. Generally we’re not pushing 100% like they used to. Back in the day it was a more extreme race – a sprint – but F1 is not like that any more. It’s about conserving tyres and fuel and batteries, and that’s not what people want to see…”

Quite right, it’s not. As I said, across the world – in any category you wish to choose – racing has in the last few years suffered a huge drop in popularity, and the powerbrokers of F1 have been putting their heads together, trying to come up with ways and means of arresting the decline. Needless to say – because F1 moguls essentially care for nothing save their own interests – the process has been tortuous.

Whatever Mosley may have said in the early noughties about the need to cut speeds, the thinking now is that they absolutely must be increased, and dramatically so, enabling these bloated cars at least to match the lap times of the V10 era a dozen years ago.

I’m informed that Mercedes and Ferrari, thinking more of spectacle than brute pace, put forward a plan of which most enthusiasts would have approved. The emphasis would have been on speeding up the cars by increasing mechanical – rather than aerodynamic – grip, but another faction was all for doing it with ‘aero’, with greatly increased downforce, and if you were Red Bull and had the aerodynamic genius of Adrian Newey on which to call, why wouldn’t you? 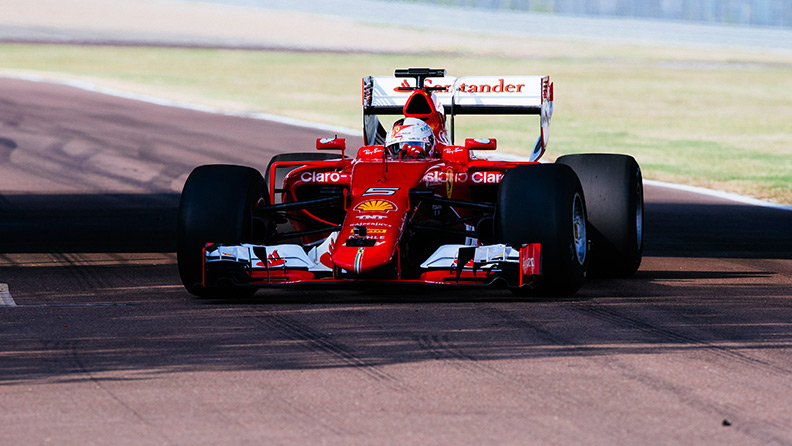 Whatever, they won the day. In 2017 the cars will have hugely bigger tyres – and also much more downforce, which Hamilton has described as, “The very last thing we need…”

Will the cars be much quicker than those to which we have lately become accustomed? Undoubtedly.

Will they be more spectacular to watch? Not according to Pirelli’s Paul Hembery: “If you’re cornering with that much grip – and if it’s to be believed up to five or six seconds quicker – that clearly is going to be felt by the drivers in dramatic fashion. It could be that the car has such grip that it’s more driving on rails than driving on the limit…”

Will the quality of the racing be improved? Not unless increased downforce changes the habit of a lifetime, and miraculously permits cars to go through corners nose-to-tail.

I hope time will prove me wrong, but I have the greatest misgivings about the revised F1 for 2017. Indubitably the cars will be much faster, and it may be that the drivers get more pleasure from them, but I’m not sure – however quick it is – that spectators will get much from a high-speed train, with minimal overtaking. It seems to me that Lewis is entirely right in his observations about increased downforce, but did anyone ask the drivers for their opinions? As in IndyCar racing, apparently not.

As well as that, the ‘saving’ aspect of F1 – be it of tyres, fuel, energy, whatever – has not been addressed, so this high-speed train will still not be able to look upon a Grand Prix as a sprint. Fernando Alonso, perhaps the ultimate racing warrior, has said that if he doesn’t get back the pleasure from driving he remembers from his early days, with a 900-horsepower engine in a 600kg car, next season will be his last in F1.

‘Get in and drive the hell out of it’ used to be the F1 driver’s creed, but we seem to have lost sight of how it was in that simpler time.