A catch-up with David Coulthard never keeps you on one single track for long. That’s because the 13-time grand prix winner spreads himself across so much as TV pundit, businessman with an ever-expanding portfolio and committed racing dad. Life was a deal more simple (but definitely not easier) when all he had to focus on was seeking that extra tenth or three when chasing – and sometimes leading, when the stars aligned – Mika Häkkinen and Michael Schumacher 20 years ago.

Now 51, Coulthard has come a long way and yet at the same time not very far at all. His life still revolves around motor racing and in everything he does, he instinctively relates back to what he learnt driving for Frank Williams, Ron Dennis and Red Bull tsar Dietrich Mateschitz. Now karting, where it all began for him, has drawn him back thanks to the nascent racing exploits of his 13-year-old son, Dayton.

“He’s just got back from Shenington where I remember racing many years ago,” says Coulthard, calling in from his office in Monaco. “Next I’m taking him to PF International – so basically I’m either at grands prix or kart tracks.”

That’s no hardship. “Actually, I enjoy hanging around kart tracks watching the kids,” he admits. “As long as they are being respectful. There are a few thugs, of course, which has been an insight for me. I actually reached out to David Richards [in his role as chairman of Motorsport UK]. I was just amazed at how aggressive karting is. None of that you can do in cars and it just wouldn’t be accepted. But in karting there’s a long line of kids after the race up to see the stewards, which seems so inefficient.”

What a shame that ugly element is Coulthard’s takeaway from the modern karting scene. “They’re young and they think it’s normal because they have dads who tell them to get stuck in, get your elbows out and push people out of the way, which again you just can’t do in cars,” he says. “You can bounce off people, as we’ve seen from Max and Lewis on occasion. But mostly you just get found out.” 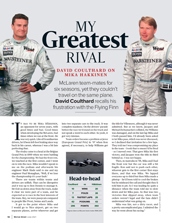 It has to be Mika Häkkinen, an opponent for seven years, with good times and bad. Good times when developing the McLaren, bad times when we ran at the front.…

Coulthard as racing dad is an interesting concept. He’s never been one to suffer fools and it’s hard to imagine the signature approach of direct honesty, about himself as much as anyone, would be filtered for his own offspring. “It’s terrible!” he says of the racing dad experience. “I never imagined… you just don’t know until you are there. I always had a great deal of respect for my parents just getting me on the kart tracks, especially travelling down from Scotland at weekends as we did. But now I understand why my mum used to stand, even when I was in F1, with her fingers on both hands crossed all the time. It’s so stressful, you’ve got no control.”

He then reveals attempts are afoot to lure him back into a cockpit. “I’ve had Mika trying to persuade me to do some endurance racing – not karting – and I’ve had Jos [Verstappen] on at me as well.”

The current world champion’s old man has mentioned the Dubai 24 Hours at the end of the year. Would he really be up for such a prospect? “I’m not against the idea. I’ve done one endurance event in 1993” – referring to his only Le Mans 24 Hours, in which he won the GT class on the road sharing a Jaguar XJ220C with David Brabham and John Nielsen, only for the Tom Walkinshaw Racing entry to be disqualified on a homologation technicality. 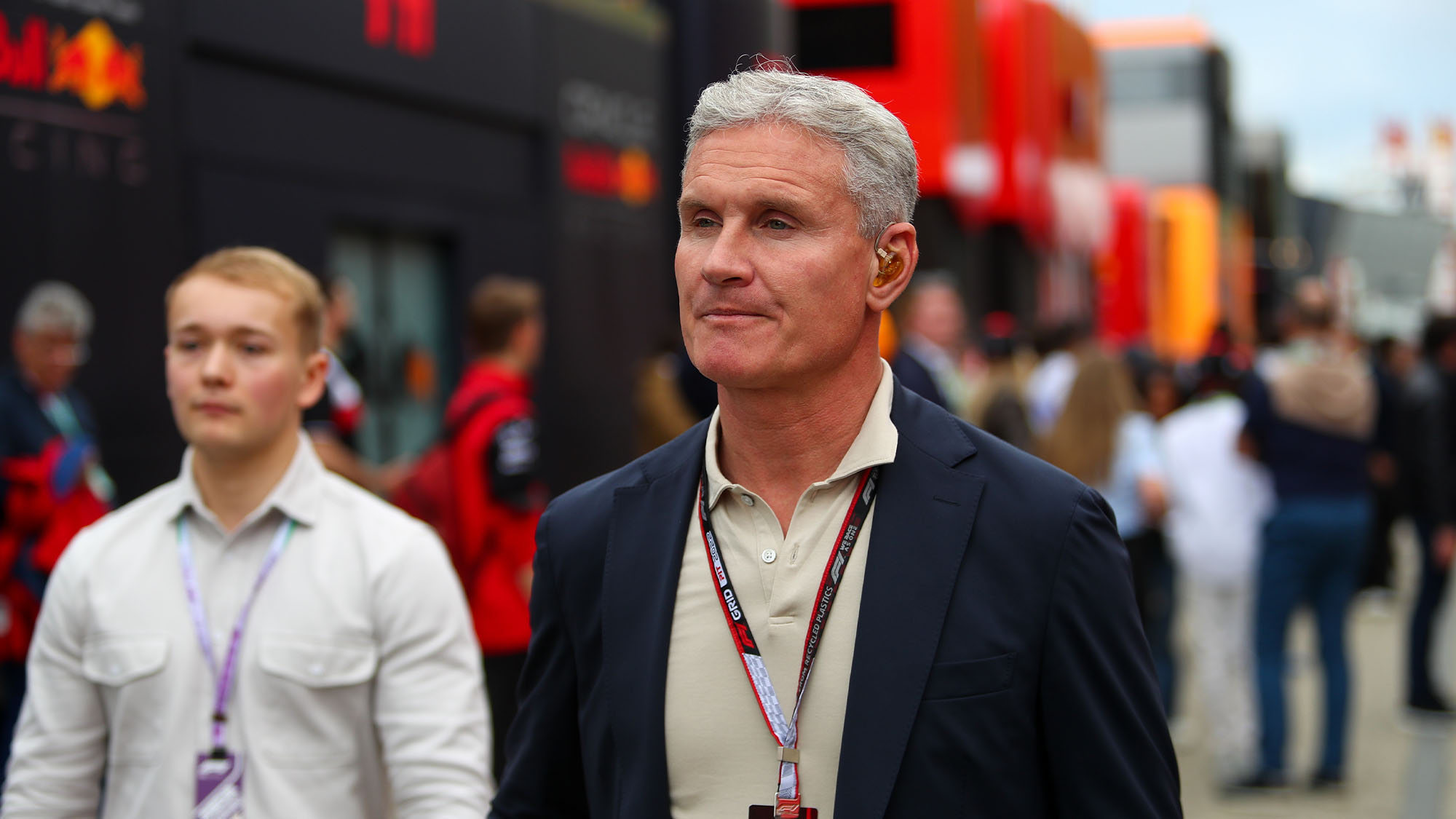 Coulthard’s presence in the paddock now ranges from work with his production company, TV punditry, promotional work for various companies and his role as President of the BRDC

“If you’ve always been a hobby racer that’s your reality, but when you’ve retired from mainstream racing and you go from being a professional to it being a hobby it’s very difficult to get the focus to the same level it used to be. Do I want to commit to do something with Jos? We might end up fighting…”

His business life is tied into racing too. Coulthard has more skin in Channel 4’s F1 highlights shows than simple punditry, given that he’s co-founder of Whisper, the production company responsible for the coverage. Now he’s expanded into the events world through his agency named, suitably enough, Velocity, which was set up as an arm of a larger umbrella company called TBA Group, run by Guy Horner – brother of Red Bull team chief Christian. Small circles in a small world.

Whisper, co-founded with Sunil Patel and former BBC colleague Jake Humphrey, is a proper success story. “We now employe a couple of hundred people across most sports,” says Coulthard, who has similar ambition for Velocity. “We focus on motor sport because that’s my world and where my contacts lie. We’ve worked with Formula 1, Red Bull, Formula E teams, Extreme E, a new electric boat racing championship. We’re one of the go-to motor sports events businesses.”

Of course, the expanding digital and virtual world are part of Velocity’s brief and he speaks with confidence about ‘the Metaverse’ – without losing his sense of humour. “When the team first came to me with the idea I said ‘well, that sounds like a cool holiday destination, how do I get there?’ But it’s a whole world of opportunity and you need the right people who can translate it into normal, everyday life.”

Normal, everyday life is something Coulthard still understands, despite the life he leads in Monaco. His brother still runs the family transport business and David agrees with the notion that his business life is only a stone’s throw away from the racing existence he relished from childhood into his 30s. “I’m really enjoying the world I’m living in now, which takes me around F1 as an individual pundit,” he says. “In my office where I’m sitting I can be across what Whisper is doing, what Velocity is doing and other things I’m involved in which are not public facing. It’s a bit like being a driver in that you are in the privileged position where you can affect and influence change, then totally trust those who are experienced in that field to then be creative – and then, like a customer, pass opinion.

“Everything is so related to how my life was as a driver because you are part of a team, but you are also the customer. When you drive, you go out, test, come in and only say ‘this car is amazing’ if you have just won a GP. Instead, you tend to say ‘what I need to go faster is this’ or ‘this is the limitation, what can you do to make me go faster?’”

Managing people is a challenge, particularly because he has to remember that not everyone can easily accept the “blunt” language of motor sport that he’s used to. “Motor sport is a critical world, which we understand because we’ve been around it, but your average person probably would find it a bit blunt in how we communicate with each other. We don’t spend a lot of time on the niceties, we spend time saying ‘this isn’t right, I f***ed up here, I’m working on it and won’t make that mistake again.’ We do have blunt conversations.”

So how does he speak to those whom he now employs? “I use a different tone across a wide range of people.” 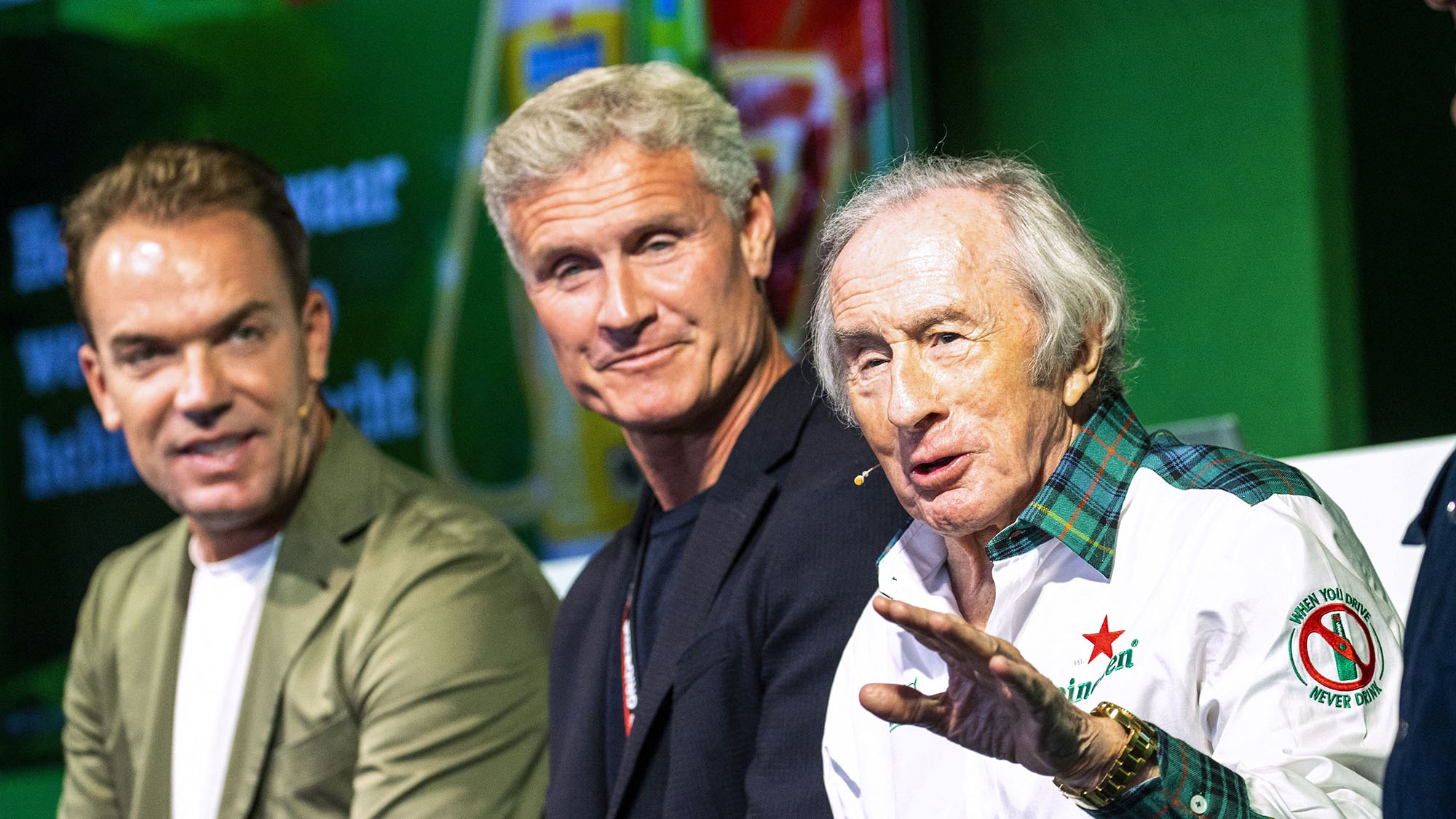 There’s more to discuss, but time is short. How about W Series, the all-female racing initiative of which he is a founding director and that kicks off season three this weekend in Miami, on the F1 undercard? He gives a long, rambling answer to the ‘Jamie Chadwick question’: is it right that the double champion should return to aim for a hat-trick and a further dip into the generous prize fund?

In short, he thinks Chadwick is “probably still behind the experience curve of a like-for-like boy in karting or man in cars”, that he’s looking forward to fresh talent coming in this season and measuring themselves against her as the yardstick, and fundamentally believes that “this championship should be open to anyone that’s qualified to be able to come and earn a living. If they are good enough, they will take their prize money and invest it in their career. If they are not good enough they will go off and do something else. That is the way of the world for everyone.”

At Silverstone, lest we forget, he’s president of the British Racing Drivers’ Club, but mostly limits himself to an ambassadorial role, in contrast to the hands-on approach his old Formula 3 boss Jackie Stewart used to take. But he does drop in that “one thing we are working towards is having a world-class karting facility in addition to everything else we have there. It makes sense to have that full experience at Silverstone.

“I don’t pretend to come in with a day-to-day magic wand. Clearly I have knowledge, experience and passion for the venue. When I can contribute I do and when they don’t need my experience I keep my nose relatively out of it.”

Time is up on our chat: those plates won’t spin themselves. Coulthard has eased and grown comfortably into his ex-F1 driver status and has moved on from the old existence. Just not too far – which is precisely as he likes it.